Non-traditional propaganda: Russian youth is being dragged into the abyss 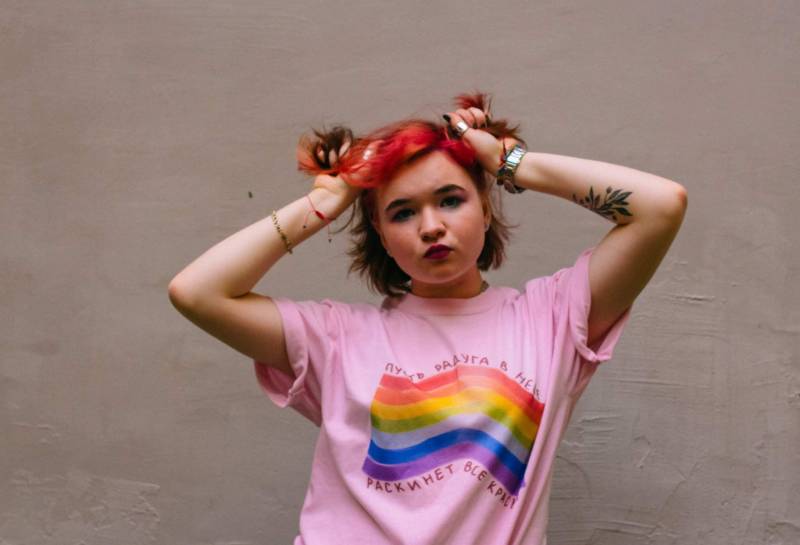 We want, how are they?

The child does not choose his gender at birth. Who is to blame that a boy was born a boy and a girl a girl? Errors of nature are easily corrected at a very young age - you just need to give the baby the opportunity to independently choose his gender. Approximately such theses now reign in the Western world. Hair stands on end from perverted parenting. Of the latter, the United States suspended a student who refused to recognize the existence of a third sex in addition to the traditional male and female. As it turned out, the Americans are now almost a criminal offense. The guy recklessly shared his thoughts with a classmate on the bus. Later he duplicated the idea of ​​the existence of only two sexes in the chat, for which he was punished by suspension for one football match. Now the daredevil filed a lawsuit against the director, who, allegedly, had no right to such actions - after all, sedition was not expressed during school hours. It is not known how the litigation will end, but the supporter of the traditional understanding of the world can only wish good luck. The presence of a third sex in the United States is no longer news - at the end of October this year, the first passport was issued with a corresponding mark “gender X”. Dana Zzimm, who previously served in the Navy navy... The State Department celebrated the event on a grand scale, highlighting that President Biden's administration guarantees equal rights for LGBT activists. Old man Joe, by the way, came to power largely thanks to the American gay lobby.

Two years earlier, the father lost a lawsuit in Texas when he tried to stop his ex-wife from changing the gender of his 7-year-old son. The wife first noticed that the boy was interested in toys for girls at McDonald's, then took him to the clinic, where he was diagnosed with gender disorder. The mother who went away began to sculpt Oscar Wilde from her son - she dyed, dressed in women's dresses and, finally, thought about gender transition. Simply put, about medical intervention and anatomical gender reassignment. The outraged father filed a lawsuit in court, which he successfully lost. By the way, the Anglo-Saxon judicial system is built on case law, which dramatically reduces the rights of American children to grow up in the state in which they were born. 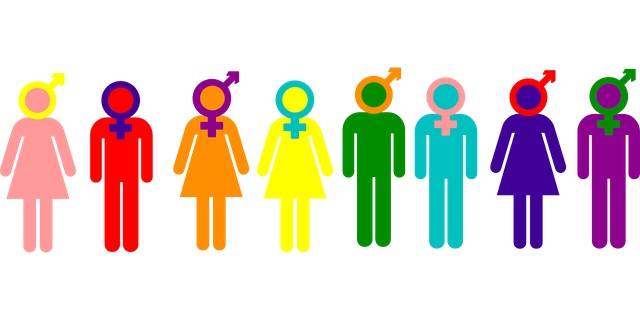 The world in the minds of the "enlightened West" is now like this. Source: steemit.com
The liberal get-together in the West is gradually going crazy. In the USA and Great Britain, organisms that affectionately call themselves "people who love minors" are seriously considering joining LGBT people. That is, in fact, they offer to legitimize their activities and call it a new form of attraction. So far, unconventional people manage to get rid of pedophiles, but progress cannot be stopped - after all, in England and Wales until 1967, sodomy was a criminal offense. And now nothing - got used to it. In the United States, Professor Allyn Walker has openly called for pedophiles to be considered a variant of the norm. He said floridly: “Sexual abuse of children is never normal. But attraction to minors, as long as the child is not influenced in any way, does not mean that the person who has this attraction is doing something wrong. " In the United States, social networks are unanimously condemned. While condemning.

Of course, in modern Russia such a theater of the absurd is not observed, but the first shoots of freedom of LGBT morals have already appeared. And, above all, this is expressed in the promotion of non-traditional values ​​among young people.

Several "cases" characterizing the state of affairs in Russia. Representatives of show business are at the forefront of gay propaganda, as before. Alyona Shvets, a XNUMX-year-old rising Russian pop star (Rhymes Music label), makes her career solely on pedaling girl-girl and boy-boy relationships. At one of her concerts, she drove the youth to a frenzy - the same-sex couple began to kiss openly. The guard made a remark - and away we go! Shvets interrupted her vocals, publicly condemned the blatant non-tolerance and transferred the “lovers” to the VIP-box. All this, of course, was accompanied by thunderous applause from those present. Shvets does not hide his sympathies in the lyrics either. Roskomnadzor filed a complaint about the content of the song "Two Girls", which clearly shows signs of LGBT propaganda. Moreover, in the recent stories with the attempted suicide of a minor in Saratov, thrown out of the window on the air, Shvets' ears are also visible. According to eyewitnesses, the deceased, among other things, was inspired by the romance of unrequited same-sex love from the song "Two Girls". And just the other day, the Novosibirsk police, where the complaint was sent, decided:
“It has been established that this song is about the friendship of two unidentified female persons. There is no narration about sexual intercourse with anyone in the lyrics, there are no calls for same-sex love in the lyrics. "

Apparently, for the reaction of the Russian police, there is not enough blatant pornography in the videos - only then will the corresponding decree be issued.

If Shvets with his songs mostly shines in the online space and, perhaps, does not fall into the field of view of law enforcement officers, then the television bacchanalia Muz-TV. The Beginning of the World ”at the presentation of the June prize in the police, nevertheless, was appreciated. As a result, the Basmanny Court fined the TV channel 1 million rubles for promoting non-traditional sexual relations. In the course of the action, which was more like a Sabbath, the antics of Kirkorov, Dava (aka Manukyan) and Milokhin caused a special abomination. "Muz-TV" was pierced at the mark 6+ and broadcast time. Now, if they put 18+ and launched after 23.00, then there would be no penalty. One million rubles for the TV channel and one hundred thousand rubles for editor-in-chief Andrey Razygraev! Basmanny court, seriously? Such a decision, and even delayed by almost six months, is very similar to a precisely calculated advertising campaign for a channel. Why these symbolic punishments for media moguls? You can simply oblige Muz-TV to remind viewers at each commercial break that the channel supports the propaganda of the LGBT community in Russia. Or attach an appropriate warning sign next to the channel's official label. With foreign agents, this story goes away and the penalties for non-compliance are much more serious. 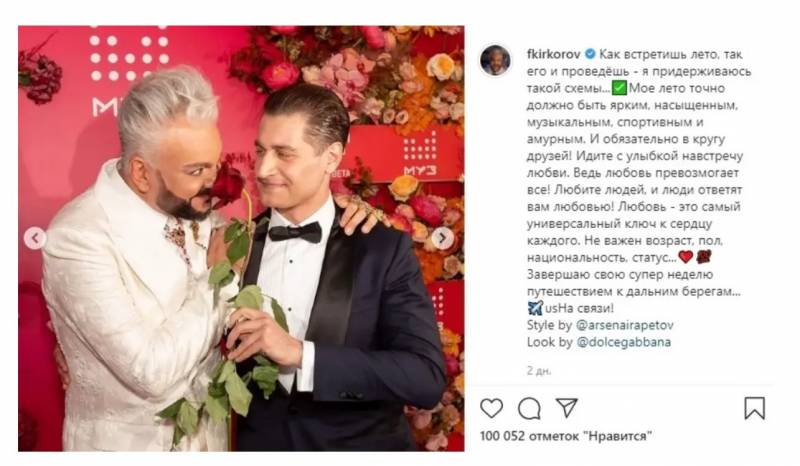 Source: Instagram
In fairness, it is worth listening to the opposite side of the conflict. In an interview with lenta.ru, a certain “trans person” under the fictitious name Lydia and, in combination, a lawyer, comments on the law banning LGBT propaganda in Russia:
“What is propaganda? Publication of a literary work, any film work, musical work. Let's now ban Judas Priest or Queen because of this, because their frontmen are gay people. So what? Everything is so blurred that anything can be drawn to this law by the ears ”.
Universal argumentation, you will not say anything.

You can also add the sad story of Alan Turing, the famous hacker of the fascist Enigma cipher machine, who was forcibly put on hormone therapy after the war. As a result, the mathematician committed suicide, and since then it has been one of the most important arguments in the struggle for the rights of LGBT communities. But this is not the question now - no one in the common sense will accuse Judas Priest, Queen or Elton John of gay propaganda. And no one would have touched Kirkorov and Dava if they had designated their wedding 18+ and would have appeared after midnight not on the federal channel, but at a private party. We are now talking about children who are being "fed" with non-traditional values. There is a concept of majority, before which the psyche and moral values ​​are not formed.

These are common truths, axioms, if I may say so. In Russia, there are enough incomplete families, violence and parental alcoholism to add the propaganda of same-sex love. Wait until the person turns 18 and let him decide for himself.