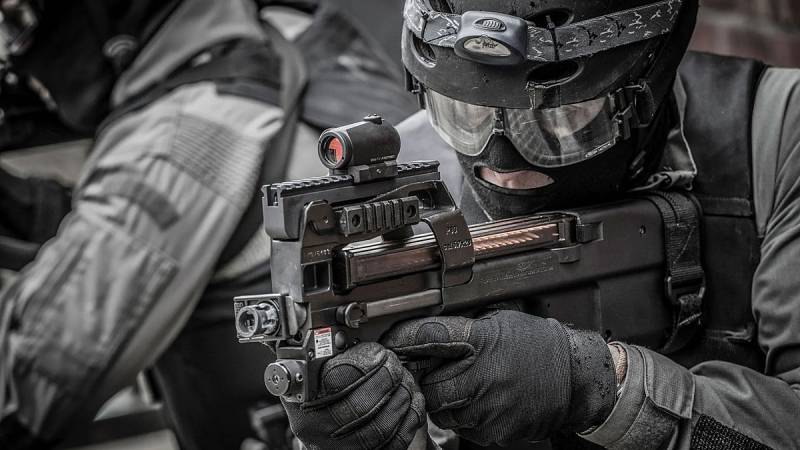 The first submachine guns appeared during the First World War, for those years it was a real breakthrough. By that time, all participants in the war had already appreciated the importance of machine-gun fire and the machine guns themselves, which clearly proved their effectiveness on the battlefields.

The emergence of an individual rifle weapons, which could fire automatic pistol cartridges, was the next stage of development. Now any fighter got his hands on an automatic weapon, while maintaining high mobility and the ability to maneuver with fire. Considering that most of the machine guns of those years were easel or carriage guns and could weigh up to 60 kg, this was an obvious progress.

During the Second World War, submachine guns were already massively distributed in the armies of the belligerent countries, it was a real benefit of such weapons. After the war, the interest of the armies of the world shifted towards machine guns (assault rifles), which became the main individual weapon of the soldier. But the submachine guns did not disappear anywhere. This weapon is widely used today by special forces around the world, especially by police special forces.

The FN P90 submachine gun stands out for its futuristic design. This Belgian model of automatic weapons is familiar to many, even to those citizens who are not particularly fond of small arms. It's all about a very memorable appearance. The Belgian company FN Herstal has released a model that is difficult to confuse with other samples on the market, while providing the weapon with an excellent set of characteristics.

The designers from Belgium invested in the design and paid off. The bullpup model is in demand all over the world and is in service with dozens of countries. Turning to the bullpup scheme allowed the developers to reduce the overall dimensions of the weapon, without sacrificing the barrel and firing characteristics. With a total FN P90 length of 505 mm, the barrel length is 264 mm. This is a very decent indicator.

FN P90 submachine gun, photo: fnherstal.com
The main cartridge in the FN P90 is 5,7x28 mm ammunition. Belgian samples are made specifically for this cartridge. The weapon, in addition to its compact size, is also distinguished by its low weight. Without cartridges, the model weighs approximately 2,6 kg. The FN P90 submachine gun has an effective range of 200 meters. Rate of fire from 850 to 1100 rounds per minute, depending on the model.

A distinctive feature of the Belgian submachine gun is an unusual magazine, designed for 50 rounds. The store is unique; a US patent was filed for it in March 1990. The box magazine is located on top of the receiver of the weapon, while the cartridges in it are located horizontally, perpendicular to the barrel of the submachine gun. They are rotated 90 degrees before being fed into the chamber. The magazine is made of transparent plastic, which allows the shooter to always see how many cartridges remain at his disposal.

Talking about submachine guns, it would be difficult to ignore the Israeli model "Uzi". This is a truly iconic and well-recognized example of small arms, which has become the hero of numerous films, leaving a large mark on popular culture. There is nothing strange in this, considering that various modifications of the Uzi were in service with the armies, police special forces and security forces in more than 95 countries of the world.

The submachine gun, created by the designer Uziel Gal, was named after him and has been mass-produced since the second half of the 1950s. In Israel, weapons are produced by the large arms concern Israel Military Industries. This is one of the few examples of Israeli weapons that have been widely distributed throughout the world, having taken part in many wars and conflicts of the second half of the XNUMXth century. In the XNUMXst century, weapons are still relevant. 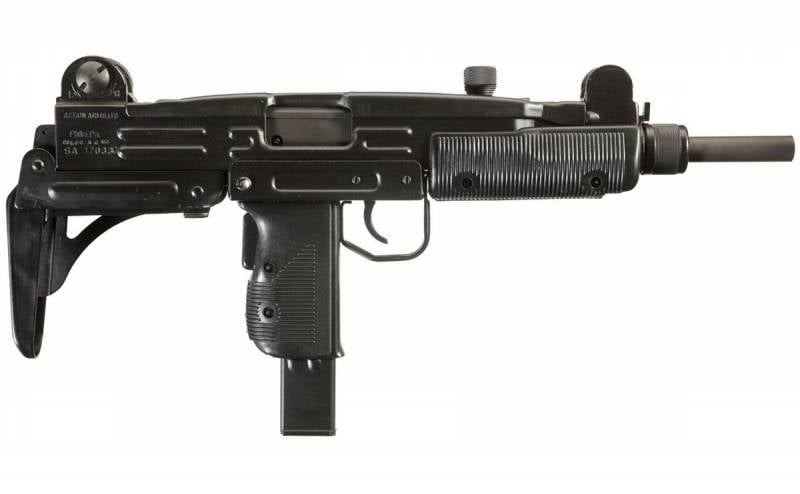 Israeli army Uzi submachine gun, photo: wikimedia.org
The submachine gun turned out to be compact. Modern Mini-UZI and Micro-Uzi models are truly miniature. So, the Mini-UZI model has a total length of 360 mm with a folded stock, and the Micro-Uzi does 250 mm, according to this indicator, the submachine gun is as close as possible to automatic pistols. Simultaneously with the total length, the trunk also decreased. For the Micro-Uzi model, the barrel length is only 134 mm. The weights of the models are also appropriate: 2,75 kg and 1,95 kg, respectively.

Of course, Israeli submachine guns cannot boast of good accuracy or effective range. But in confined spaces, dense buildings or at short distances, they are very effective, for which they are often used by police units around the world. The cartridge used is the timeless classic 9x19 mm Parabellum.

Experts call another important advantage of the Uzi submachine guns the method of reloading the weapon when “the hand finds the hand”. The UZI handle also serves as a neck for box magazines, it is very convenient to use, especially in the dark. At the same time, a wide variety of magazines for 20, 32, 40, 50 or 62 rounds are available to the shooters.

In the ranking there will be a place at once for two representatives of the German company Heckler & Koch. Designers from the small town of Oberndorf am Neckar have created two small arms, which are widely distributed around the world. So, created in the early 1960s, the MP5 submachine gun chambered for 9 × 19 mm Parabellum was in service with more than 50 states and was widely used by NATO countries. This model was used even by American special forces from the Navy SEALs.

The weapon turned out to be reliable and durable in German. MP5 does not lose its relevance, many police and military special forces are still armed with this particular submachine gun. At the same time, externally, the weapon is an adaptation of the G3 assault rifle, which has decreased in size and received a pistol cartridge. The overall shape and configuration of the G3 and MP5 are as close as possible, right down to the adjustable sights.

One of the earliest versions of the MP5A3 submachine gun, photo: wikimedia.org
The MP5A4 submachine gun model with a plastic stock and the ability to fire "with a cut-off" of three rounds has a total length of 680 mm, the barrel length is 225 mm. Weight of the submachine gun without cartridges 2,66 kg. Mass models with a folding stock have a maximum length of 550 mm.

The effective range of the MP5 submachine guns is 200 meters. The models are equipped mainly with two magazines: for 30 and 40 rounds. Experts highlight the good muzzle energy of submachine guns and their low recoil in comparison with small arms with a blowback. Due to firing from a closed bolt on the MP5, high precision of single fire is realized.

The second very popular and successful model of the German arms company was the MP7 submachine gun. A small compact submachine gun, created in the early 2000s, can in some way be called the answer to the Israeli Uzis, only more advanced and designed at the most modern level.

The model is currently actively conquering the market. Moreover, the operators are located not only in Europe. Thus, the MP7 submachine guns are in service with the special forces of South Korea and Japan. It is also curious that this particular model is in service with the Vatican Swiss Guard.

Despite its small size, the MP7 submachine gun surpasses many competitors of the same dimensions in accuracy of fire. The length of the submachine gun with the stock folded is 415 mm, with the stock folded out - 638 mm. Barrel length - 180 mm without a flame arrester. The weight of the weapon is also very small - only 1,8 kg without a magazine with cartridges. For shooters, two main types of magazines are available: for 20 and 40 rounds, differing in weight (0,1 kg and 0,2 kg, respectively). 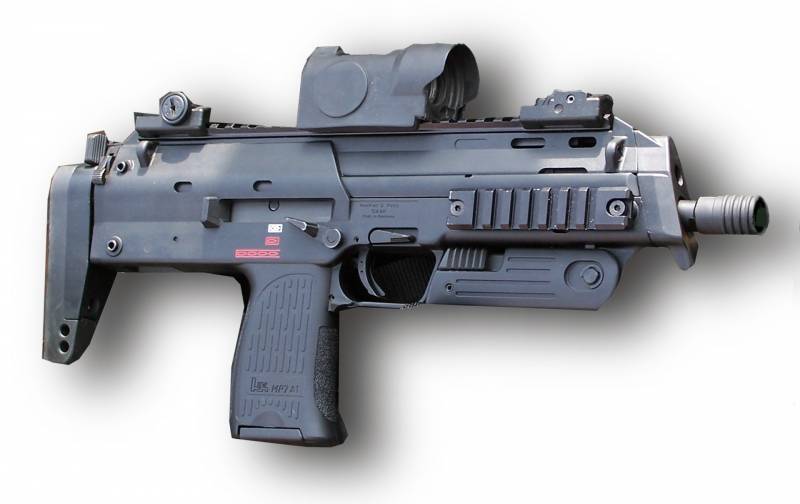 MP7A1 submachine gun, photo: wikimedia.org
A distinctive feature of the model is the cartridge 4,6x30 mm. Automatic weapons were specially developed for this new ammunition. Experts say that the advantages of this cartridge are low recoil when firing, good flatness of the trajectory, and high firing accuracy. At the same time, the stopping effect of such an ammunition is predictably small.

Like the Uzi, the German submachine gun is designed so that the magazine is inserted into the pistol grip. A folding telescopic buttstock and an additional front folding handle ensure ease of use of the weapon.

The rating is closed by the domestic Vityaz submachine gun. Small arms from Izhevsk are constantly being improved and presented in different versions. The model got its name from the name of the special forces "Vityaz", for which the submachine gun was created. Currently, this weapon, designed at Izhmash in the early 2000s, is in service with the Russian Guard, the police, the FSB, the Federal Penitentiary Service and other Russian power structures.

Like the MP5, the Russian submachine gun was inspired by its older siblings. So, "Vityaz" in Spanish. 10 was based on a shortened version of the AKS-74U Kalashnikov assault rifle. And here is the Vityaz model in Spanish. 20, also known as Vityaz-SN (PP 19-01), was based on the more advanced AK-105 assault rifle. It is reported that the models are unified by at least 70 percent. 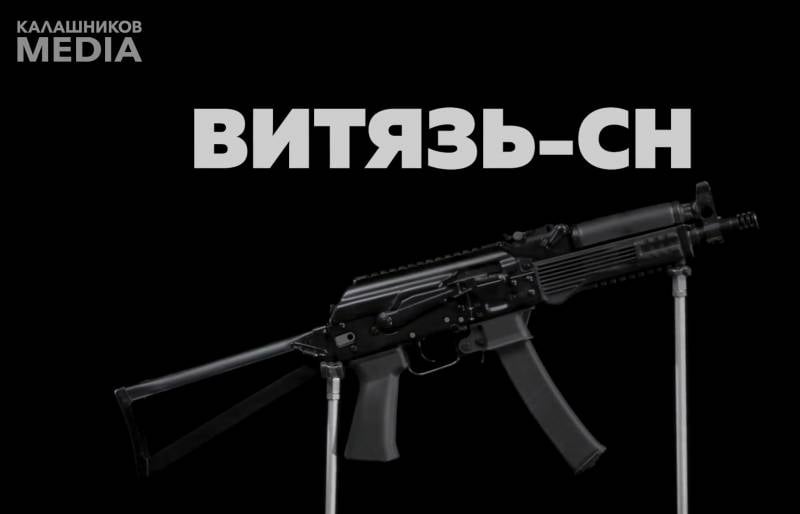 Possessing a standard sighting range of 200 meters for such weapons, the Russian submachine gun has a trigger mechanism that allows automatic and single fire. "Vityaz" is equipped with box magazines for 30 rounds. The technical rate of fire of the model is up to 800 rounds per minute.