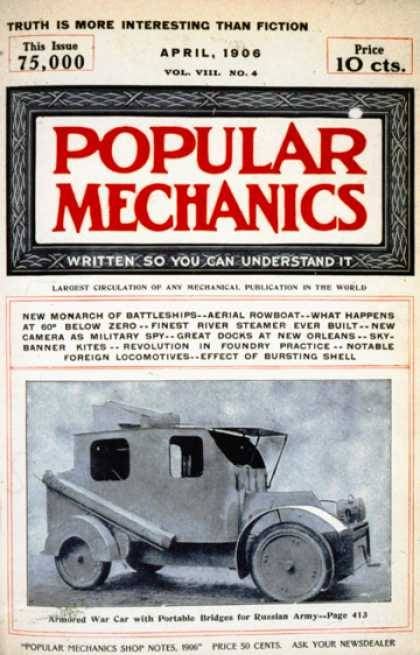 BA esaula Nakashidze on the cover of an American magazine. So much for you bast shoes Russia!

Many of His disciples, hearing this, said: What strange words! Who can listen to this?
Gospel of John 6:60
History armored vehicles. Let's start with the fact that we haven't visited our "tank freak show ”, and in the meantime a lot of interesting things appeared in it. And strange! And people at all times were surprised at the strange: some strange words, some deeds, and some various technical curiosities. Here we are today, let's look at them a little, admire and wonder, since there is something for it.

But let's start, perhaps, not with a drawing, but it is from them that our freak show usually consists, but from the photo on the cover of the April 1906 issue of the American magazine Popular Mechanics. On it, as you can see, there is a photograph of the Russian BA Esaul Nakashidze. Immediately, we note that this is the first photo of an armored car that appeared on the cover of an American magazine, and this armored car is Russian. So whether there were many of these armored cars, you never know, they were built in Russia or in France, does not matter. Only this photo and the inscription “Armored car for the Russian army” plays a role. Such photos are inexpensive (and sometimes just the opposite - very expensive!), But they are always highly valued. So appreciate this fact! 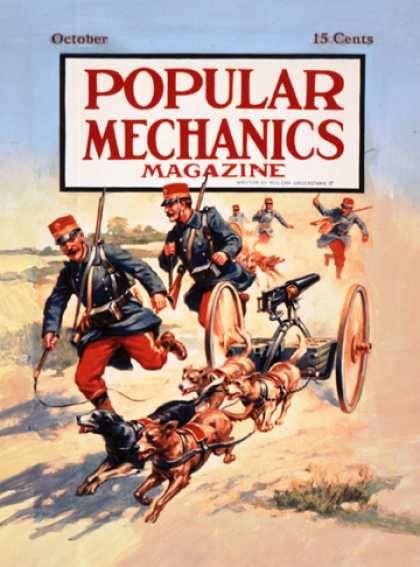 Another cover of the same magazine for October 1914 and ... it actually has a ready-made exhibit for any military museum of the First World War or military equipment, and the exhibit is simply wonderful: the calculation of a machine gun that is transported by a dog team! And French soldiers in red trousers are running next to the dogs! Yes, there was such a thing in the history of the PMM, until finally, instead of their red pants, they donned protective ...
But we will talk separately about the role of French artists in creating camouflage coloring, but for now we are looking at the next two drawings. On them - field wheel shields, which were proposed to be used to move the infantry across the battlefield under enemy fire.

The first is a 1915 French shield. It was assumed that by hiding behind such bulletproof shields, infantrymen would be able to attack enemy positions even under machine-gun fire. 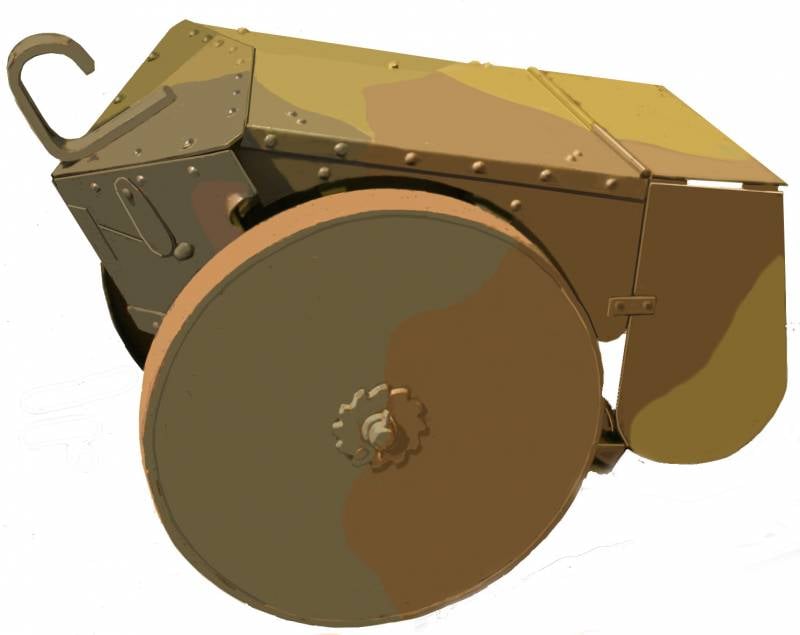 1915 French infantry shield. Located in the Army Museum in Paris
Interestingly, the French Colonel Jean Baptiste Eugene Etienne, back in August 1914, proposed equipping the infantry with such shields. Moreover, it was he who owned these truly prophetic words:

"The victory in this war will belong to the one who first installs the cannon on a vehicle capable of moving across any terrain," - Colonel Jean Baptiste Eugene Etienne, August 24, 1914 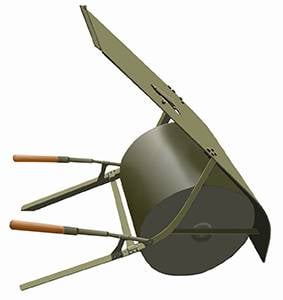 The design of the shield on one skating rink, which was supposed to increase its security ...
However, the same French quickly realized that the flat armor, substituted for the bullets, should be quite thick, and therefore heavy, and the passability of such "armored rollers for asphalt" would be small. Another thing is the "armor bullet", assembled from two stamped halves on small wheels. Thanks to this shape, enemy bullets would easily bounce off it, and the weight, due to the lesser thickness of the armor, would not be so great ...

The rifle was mounted on the wall so as not to burden the infantryman, and the armor of the "armored bullet" protected him almost entirely. All that was left was to push with our feet and move forward a little! 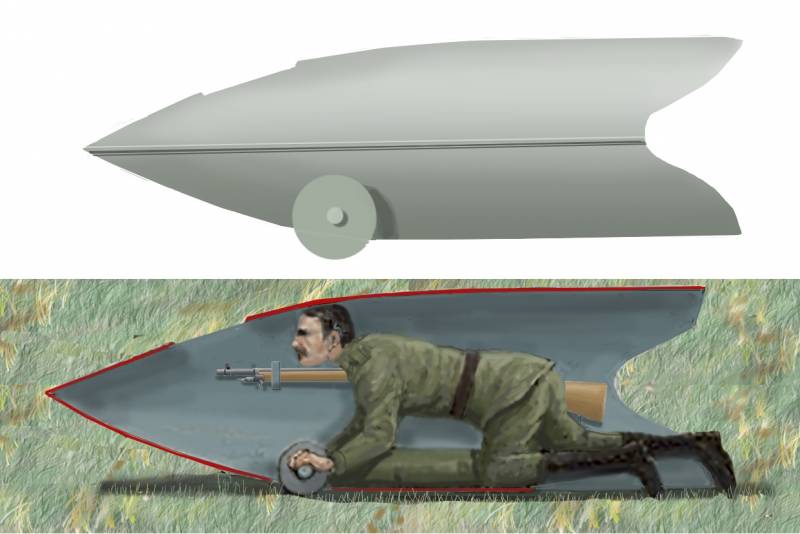 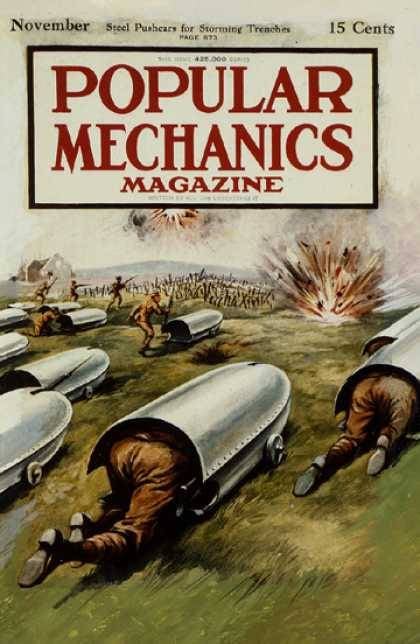 Cover of the magazine Popular Mechanics, November 1915. It seemed that here it is - a new means capable of removing the belligerents from their positional impasse, but in reality everything happened according to the Russian proverb: "It was smooth on paper, but they forgot about the ravines, and walk on them." Due to the "lunar landscape" and the abundance of barbed wire, these shields were practically useless

For some reason, our Russian armor shield looked most like a miniature tent, but it was arranged so that it was possible to shoot from it with a rifle, but not from a French "bullet"

The most economical in terms of covering their soldiers with bulletproof shields for movement across the battlefield were, of course, the Japanese. Who would doubt that!
We know what the first British tank was like. But we can only speculate, judging by the drawings, what their first tank might look like if they accepted the offer of the talented Canadian engineer Robert Francis McFay. The main feature of the machine he proposed was three tracks. Moreover, the front track played the role of a steering device, and in addition could change its position relative to the body in the vertical plane. Macfie provided for a special cutter for barbed wire, and a folding armored "nose" that protected this caterpillar from the front, and even ... a propeller that swung back behind, that is, presumably, this "tank" should have also floated with him! And then they would put on it a turret with a cannon, or even two at once, but with machine guns, and the British would have got a tank, on the model of which (this is quite possible!) They would start building tanks in other countries. Well, cars on two tracks would probably have been considered a technical curiosity for a long time!

A hypothetical drawing of a McPhee tank based on drawings from his patent application.
Then the United States entered the war, and American engineers offered the military an unusual "skeleton tank". Like, its large size will help it to confidently overcome the "lunar landscape" of the battlefield. And at the same time, getting into it in such a way as to inflict fatal damage or hit the crew will not be easy at all. The tests of this in its own way unique machine were successful! 1000 vehicles were ordered, but the war ended before they were ready.

Skeleton Tank. Located on the site of the Museum of Military Equipment of the Aberdeen Proving Ground in the USA
The tank had two engines with a total power of 100 hp, a turret with a 37 mm gun, and a crew of two. Even the gearbox was located between the tracks. The thickness of the armor was 12 mm - very good for those times.

The French were also late with relatively perfect tanks, although experiments in this area began earlier than the British, and if it were not for the annoying mistakes of the designers, France could have received the tanks already in 1915.But in the summer of 1917, the prototype Char Lourd was built here. 1A or FCM-1A. The tank was long to overcome trenches, and well armored: the frontal projections of the hull and turret were protected by 35 mm armor, the sides were of 20 mm of armor, the roof and bottom were of 15 mm of armor. The main thing is that his armor protected the tank from the fire of the German 77-mm cannon, which was very important for that time. 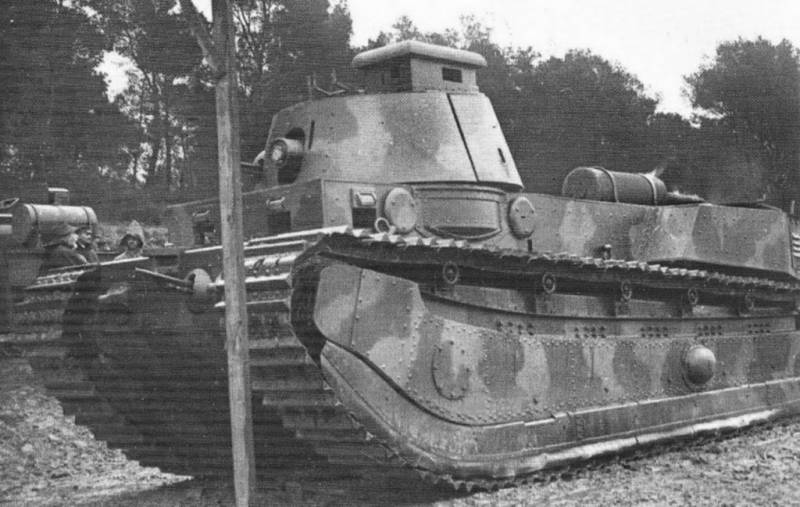 FCM-1A during testing
The crew consisted of five tankers: commander, gunner, loader, machine gunner and mechanic. The engine and transmission compartments were located in the rear of the tank, occupying more than 50% of the hull length. But the main thing was that the tank had very strong armament: a machine gun in the hull, a machine gun in the turret, paired with a gun, and ... a 105-mm cannon with 120 rounds of ammunition. It was effective weapon, but still it was replaced with a 75 mm gun due to the larger ammunition load of 200 rounds.

FCM-1A with 75 mm gun
Nevertheless, while the trial and business - the train left, the war ended and in ruined France there was simply no money for such advanced, but expensive tanks! But one can imagine what impression this tank would have made on both the Germans and the British in the same year 1917!

"Flying Tank" W. Christie 1936 - another fantastic project for its time, which, and even then - in a slightly different design was able to only we in the USSR during the war 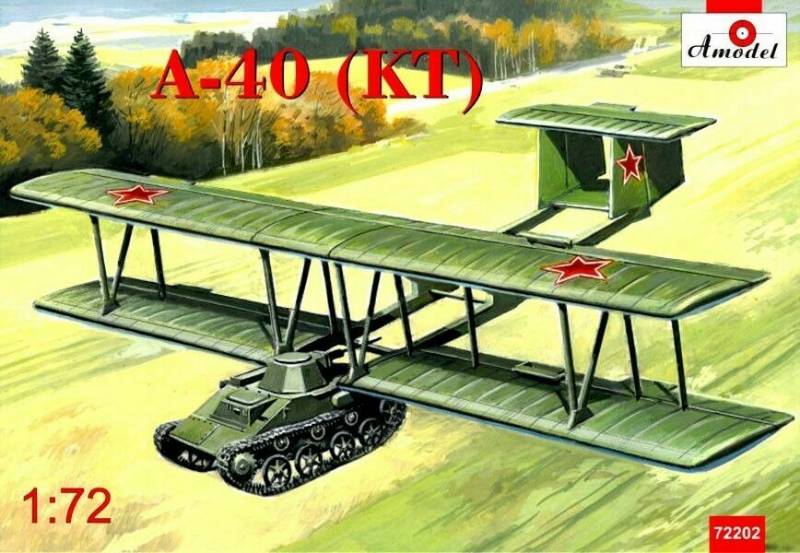 By the way, the modular model of our KT "Wings of a Tank" glider is being produced today in a scale of 1:72! 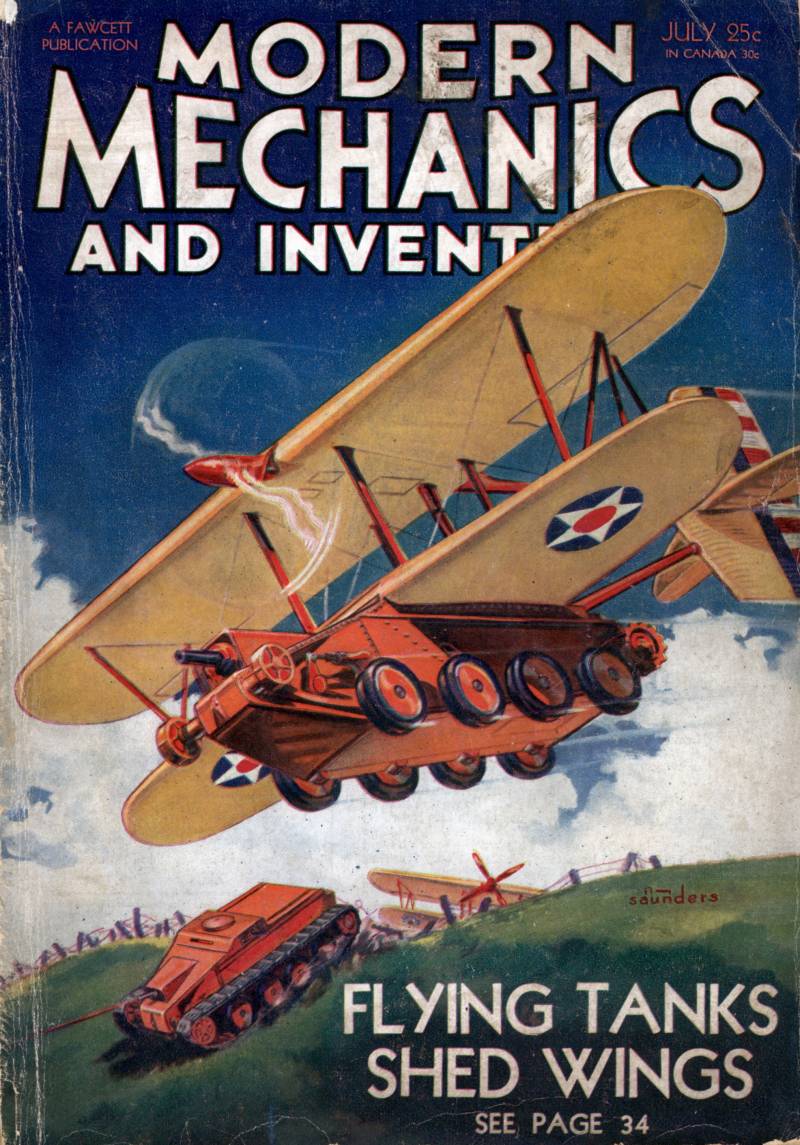 This is how W. Christie's "flying tank" was shown on the cover of the July magazine "Modern Mechanics" in 1934
But on the cover of the August issue of the magazine "Modern Mechanics" in 1936 we see something absolutely fantastic - the electric tank-auger, developed since 1935 at the Massachusetts Institute of Technology! Moreover, its augers served for movement over rough terrain and were lowered to the ground by the power of the engine, and this tank had to move on wheels along the highway! And he was armed not with a cannon or a machine gun, but with a van der Graaff generator! This large ball on a high cylindrical stand, raised above the tank's hull, was the accumulator of electric charges. They were developed due to the fact that inside the tank on rollers, a ribbon of silk was rewound, which rubbed against special brushes. As a result, electric charges appeared, accumulating on the inner surface of this ball, and the ball was naturally isolated from the body. The operator's cabin was also isolated, who had at his disposal a water cannon with a supply of water in a special tank! A stream of water was shot towards the enemy, through which an artificial lightning of hundreds of millions of volts immediately hit, and incinerated everything wet and alive. Van der Graaf himself managed to build a generator with a capacity of seven million volts, and this was by no means a limit, but the creators of this tank did not manage to increase the range of the water cannon, so the Americans did not build it. But today such a machine, only without augers, could well be used in cities against illegal protesters or insurgents. An electric shock through a stream of water will enlighten anyone! 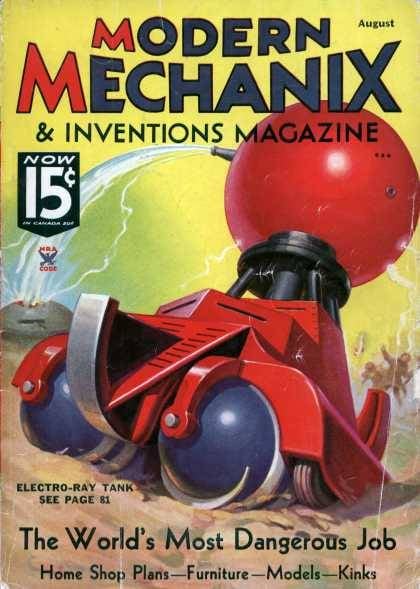 This is how he is drawn on the cover of this magazine. The fact that it is red shouldn't bother anyone. The red color of the cars depicted on the cover of this magazine was a kind of bait for the reader.
But in the magazine Popular Mechanics in 1936, the project of a tank in the shape of a ball was discussed in the most serious way. His armament was purely machine-gun: two machine guns in turrets at the ends of the hemispheres, one in the middle of the hull, from which one could shoot straight ahead, and another anti-aircraft gun. This "miracle of technology" would roll due to the rotation of two hemispheres with lugs, and the central part would remain motionless. Interestingly, instead of ventilation, it was quite seriously proposed to place oxygen cylinders in it! I wonder how soon this combat ball would catch fire if it was actually built ?! 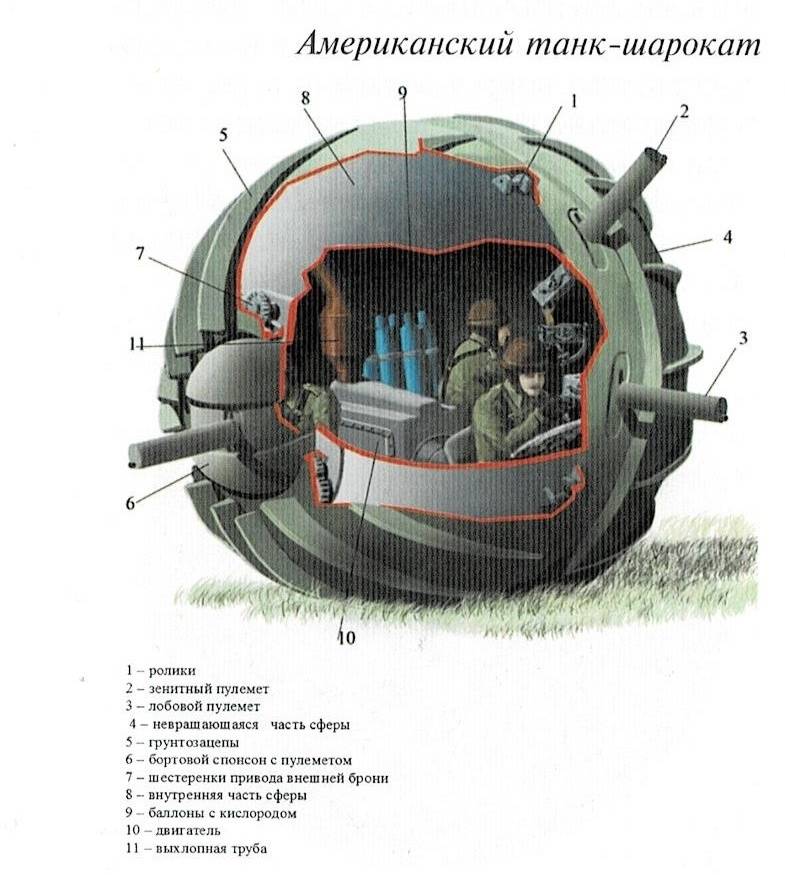 Drawing of a ball-roll tank by a modern artist based on an illustration from Popular Mechanics magazine
PS Drawings by A. Sheps are used in the material.