17 September 2012
107
By the forces of the Orthodox-patriotic public and law enforcement agencies in Moscow, acts of vandalism against Orthodox shrines were stopped 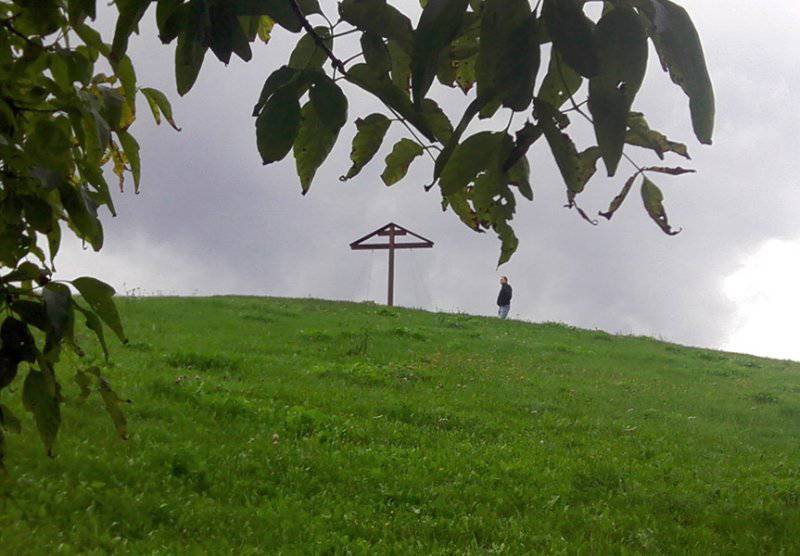 TO YOUR CROSS OUT YOUR OWN KING
AND HOLY RESURRECTION YOUR GLORIFE!

It is becoming increasingly clear that Russia is in dire danger. Her spirituality, as the last stronghold of statehood, came under serious blow from her haters.

The public hacking of icons, the arrangement of blasphemous exhibitions, attempts to introduce programs at schools that corrupt children, propaganda distortions disguised as gay parades, feminist dances in temples are all a consequence of these negative processes that the Russian Orthodox Church has now embarked on.

Recently, feminists attacked the Poklonny Cross in the center of Kiev and declared “krestopoval” in support of “Mad Vaginas” (Pussy Riot) sentenced to 2 years of imprisonment for desecrating Orthodox churches in Yelokhovsky and the Cathedral of Christ the Savior. This call of the “innocent girls” was picked up by the resurrected from non-existence “People” of the new formation and the followers of the resurrection theomachist communist religion. One hundred years ago, it was the “People’s People”, with active support from abroad, that brought a lot of misfortune and suffering to the Russian people. And the lovers of "free life" began just with the desecration of shrines, ending their work by shedding blood.

With financial resources coming from abroad, dozens of followers of the Satanists organizedly rushed to fulfill the God-hating call for the desecration and dismemberment of the symbol of Christians throughout the country - the Cross of Our Lord Jesus Christ.

But God is not mocked. On the way of the blasphemers the warriors of Christ rose ...

On the initiative of the Cossacks of the city of Moscow of the All-Great Don Army, a different Appeal was proclaimed - a call to the Cossack Oath, to the defense of the Orthodox Faith!

Each of the six Poklonnykh Krestov installed in the city of Moscow was taken under round-the-clock protection.

One of them, established by 21 June 1991 on Poklonnaya Gora in memory of the 50 anniversary of the beginning of the Great Patriotic War of the Soviet people against the Nazi occupiers, is truly called Golgotha. The Lord retained the huge, not made by hand hill in its original form, and according to the local inhabitants, it was from him that Napoleon looked at Moscow’s city keys that had not given him up.

24-hour duty on a voluntary basis took the Cossacks from:

- The All-Great Don Army: the communities of the city of Moscow;
- Terek Cossack Troops: communities of Moscow, Shchelkovo, Fryazino, Serpukhov and Ryazan;
- Black Sea Cossack Troops: communities of the city of Tiraspol;
- Central Cossack Army: Communities of Moscow, Kurkino and Zelenograd Moscow Region
- Cossack Community of the oldest city of Russian military glory - Kozelsk;
- Third Training Cossack Hundreds of TsKV in the face of command officers;
- The Cossack Community "SPAS" in the name of the martyr Patriarch Hermogen ...
and many others.
The Cross of the Crucified Lord united around him Cossacks from different cities and communities, law enforcement officers into a single whole. Law enforcement agencies of Russia and the Poklonnaya Gora Division of the Internal Affairs Directorate provided active support and effective assistance.

Attempts of desecration and blasphemous actions took place in almost all areas of protection of the Poklonny Krests.

In the area of ​​the Sokol metro station, an attempt was made to desecrate a memorial sign, the Poklonniy Cross, at the burial site of the heroes of the First World War 1914-1917, who died of wounds in Moscow hospitals.

In the Poklonnaya Gora region, several attempts to organize illegal actions in relation to the sign shrine were stopped.

Attempts to desecrate a memorial memorial on Krasnaya Presnya outside Government House were also prevented, in memory of the heroes of the anti-liberal uprising 3-4 on October 1993.

These blasphemous anti-God actions have the task of striking both the spiritual and moral state of society and our memory of the terrible and instructive events of Russia. Stories.

The desecration of our holy sites is an essential part of Russia's liberal terror, the aim of which is to split society, to undermine the spiritual and moral core of the Russian people, and ultimately to destroy the Russian State. After all, each Poklonny Cross is not only a tribute to the memory of ancestors, who laid down their lives “for their friends”, but also a tangible manifestation of popular faith and conscience.

The enemy of the human race with the hands of his followers - revolutionaries, is trying to break and crush the most holy thing that remains with the Russian people - our Orthodox Faith.

Only by rallying around the Life-Creating Cross and the Orthodox Faith, it is possible not only to rise from the dust of disbelief, but also to PROTECT YOURSELF, save the state of Russia for our descendants.