Dangerous neighbor: Poland is preparing a radical strengthening of the army 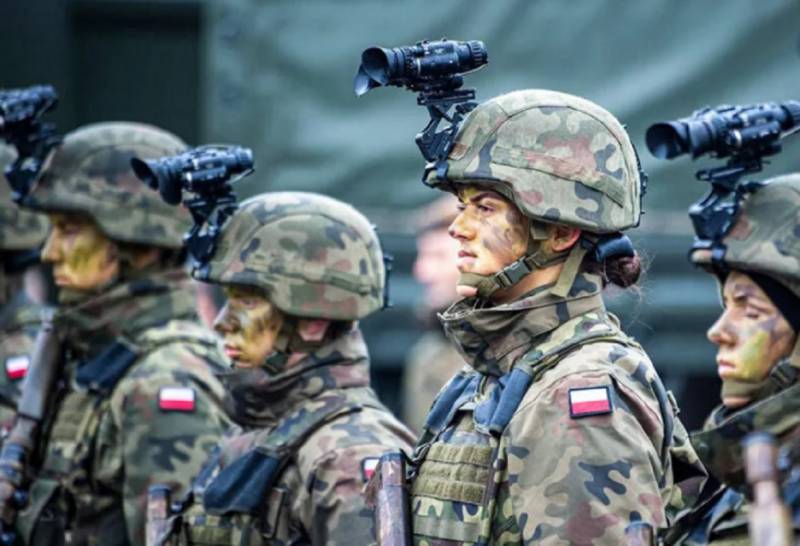 The golden days when European armies were strengthened by the terrorist threat are over. Now, if someone in the Old World proclaims a militaristic agenda, then it is invariably directed against modern Russia. So Poland, which has been threatening to increase its own armed forces for a long time, finally decided to voice a "road map".

On October 26, Polish Defense Minister Mariusz Blaszczak announced several key provisions of the new "Law on the Defense of the Fatherland". The developers did their best and submitted 720 articles of the fundamental document at once. The military managed to convince the cabinet of ministers to allocate additional funds to strengthen the country's defense capability. The money will be used to purchase new types of equipment, modernize the existing arsenal and increase the size of the army. On the first two points, work has been going on for a long time - Poland recently signed a contract for the purchase of 250 Abrams M1A2 SEPv3 in the United States. The deal cost taxpayers $ 6 billion. To justify such costs, the head of the military department, Blaschak, triumphantly proclaimed:

“We order the most modern Tanks... Top-of-the-line tanks, battle-proven, built to withstand the most advanced Russian T-14 Armata tanks. "

The Defense Minister decided to keep quiet about the fact that T-14s are still in trace quantities in the Russian army. The main thing is that the rhetoric of the Polish public is perceived correctly, and what it is filled with is not particularly important. "Armata" is now playing a cruel joke with Russia. On the one hand, the tank is still in the process of fine-tuning, and it is not clear when it will go to the troops in sufficient numbers. On the other hand, the Armata platform is now being used by European politicians to knock out money for new armored projects.

Russophobic hysteria in Poland is diligently fueled from across the ocean. Americans benefit from this for two main reasons. First, Poles are the second largest buyers of military equipment from the United States after the Saudis. And secondly, the existence of a militant Poland near Russia is very beneficial to Washington from both financial and political points of view. The Poles regularly allocate for the army the 2% of GDP required by NATO standards and are ready to increase spending. The money, of course, will go to American gunsmiths, since Warsaw has become disillusioned with European partners for a long time. It will also fall on the Turks - recently, Poland, under the impression of Nagorno-Karabakh, signed contracts for the purchase of 24 Bayraktar TB2 shock drones. The first winged aircraft will begin arriving next year.

It should be noted that a large batch of 250 tanks will seriously enhance the offensive potential of the Polish army - now there are about 800 vehicles in service with varying degrees of combat readiness. At the same time, about 247 Leopard 2A4, 2A5 tanks can be considered relatively modern. The rest of the equipment is represented by machines based on the Soviet T-72. As a result, the Poles will have more tanks than the Germans and French combined. However, for this "armada" it is necessary to find more crews with technical specialists.

To solve this problem, a new Polish defense law was developed.

Warsaw's main military doctrine should have been changed a long time ago - after all, it история started back in the communist 1967. Of course, a lot has changed since then, for example, compulsory military service has been abolished, but for modern Poland, the Soviet legacy in the army was not "comme il faut". The new law immediately repeals 14 norms and rules of the communist period and is designed for broader funding. The presentation of the law on October 26, in addition to the Minister of Defense, was attended by an ardent Russophobe chairman of the ruling Law and Justice party Jaroslaw Kaczynski. His role was quite simple - to convince the audience of the allegedly growing Russian threat.

"If Poles want peace, they must prepare for war," - the politician sprinkled about such slogans in his numerous interviews.

Kaczynski argues that Moscow is trying not only to influence its neighbors, but is also ready to restore the Soviet Union within its former borders. And after and before the restoration of the Eastern Bloc is not far, the Polish politician believes. The so-called Russian "hybrid wars" have become a new European horror story, along with the Armada "Armada". In particular, several thousand illegal migrants who have infiltrated the Polish-Belarusian border over the past month are events from this series. According to Kaczynski, it is impossible to resist the imaginary threat from Russia without a radical increase in the size of Poland's armed forces.

At the same time, the Ministry of Defense was wary of returning compulsory military service. According to the Minister of War, this will cause public hysteria, unnecessary for the country - since 2010, the Poles have lost the habit of serving their Motherland for free. At the same time, it is necessary to increase the current size of the army from 114 thousand people to 250 thousand. And that's not all - the territorial defense troops are planning to scale from 20 thousand to 50 thousand people. How to achieve such an impressive growth of the army in a country whose population is shrinking from year to year? The average age in Poland now exceeds 40 years, and every year the number of inhabitants in a 38-million country decreases by 30-40 thousand. Nevertheless, Warsaw knows how to attract citizens to military service. First, they will increase the salaries of all categories of the military - this will, to some extent, satisfy the upcoming staff shortage. Secondly, experienced military personnel with long service will remain in the service with benefits and increased salaries. For example, for those who have served 25 years, benefits are provided equivalent to 325 euros, and for persons with a length of service of 28 years or more - 540 euros. The military will be exempted from taxes, and scholarships will be added to the cadets. According to the calculations of Polish analysts, this will help to cope with the shortage of personnel only partially. There are also plans to actively involve women in the army and territorial defense. Poles already make up 7,5% of the personnel of the armed forces, it is possible that in the near future every tenth (ninth) fighter in Poland will be female. At the same time, 11% of officers are already women. Lieutenant Colonel Beata Targonska, Chair of the Women's Council at the Polish Ministry of Defense, discusses the reasons for the popularity of military service among women:

"It is important to note that the army is one of the few institutions that guarantees equal pay for men and women."

However, the Polish army has much to strive for in such feminist impulses - in the NATO countries, Hungary has a palm, where the female army share is close to 20%.

In conditions of demographic time pressure, the Polish government intends to increase the size of the army at the expense of those who previously could not be drafted into the armed forces for health reasons. The fact is that Warsaw is creating cybernetic troops (everyone remembers about the hybrid threat from Russia?), But physically strong guys and girls are not needed there. Enough "couch warriors" versed in the modern IT industry. According to the military department, even disabled people will be admitted. Quote from the presentation:

"These are people with extraordinary abilities who would not have passed the medical examination, because their health does not allow them to serve, say, in the ground forces."
The range of military ranks will also be expanded. For those who have already grown up from the soldier category, but have not grown to a non-commissioned officer position, the title of "senior specialist" will be offered. In addition, career growth will be simplified - the so-called "glass ceiling" over the soldiers and non-commissioned officers has been moved.

The new law resolves the issue of conscription military service in an original way. The authors envisioned the concept of an annual paid “voluntary service,” during which recruits will be trained for a military contract. However, it will be possible to refuse the oath and subsequent military service and replenish the clan of Polish reservists.

The plans of the leadership of the Polish Army are, of course, impressive. It seems that Warsaw is well aware of the complexity of the implementation of the plan and has not even announced the timing of staffing the new army. It is likely that the current decade may not be enough for this either. Even if the Poles manage to solve the financial issue, the problem with the personnel will remain unresolved. There are not many people who want military service in the country. Warsaw has no choice but to raise the degree of anti-Russian sentiment - maybe this will increase the motivation of recruits.