Tajikistan gives Russia rent a base in exchange for military protection 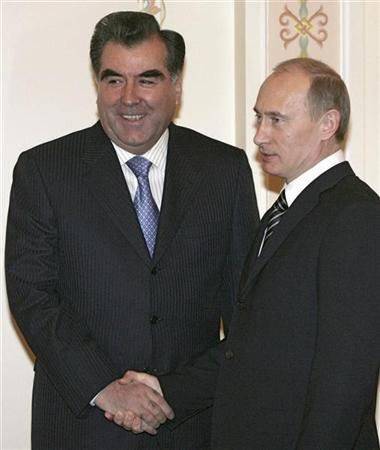 DUSHANBE (Reuters) - Tajikistan agreed to extend the lease of the Russian military base for dozens of years in exchange for the Kremlin’s promise to once again support President Emomali Rakhmon, whose regime is being tested for strength in disputes with the discontented in the outback and in frequent clashes with the militants.

High-level sources close to the negotiations of the Russian and Tajik sides told Reuters that the expiring lease two years later was being prepared for signing in October: Dushanbe is waiting for the visit of Russian President Vladimir Putin.

"The text of the agreement on the database is ready. It will be signed for a period of 20-29 years. Most likely, for 29 years," said a source in the government of Tajikistan.

"No financial issues are mentioned in the contract, that is, no one will take any money from anyone."

Official representatives of Russia and Tajikistan declined to comment on the progress in preparing the agreement.

A source close to the Russian delegation told Reuters that Moscow, which had supported Rakhmon during the bloody civil war in Tajikistan in the 90s, was ready to help the ally again.

"This (future) contract is about the 29-year free stay of the 201-th Russian military base in Tajikistan," he said.

According to him, the recent events in the autonomy of Gorno-Badakhshan had a significant impact on the compliance of Dushanbe.

Residents of a remote region in the Pamirs in August, after two days of rallies, made Dushanbe promise to withdraw from there additional special forces, whose clashes with militants led by a rebellious colonel of the frontier service claimed dozens of lives. The Pamirs during the civil war supported the opponents of Rakhmon. Rakhmon may run for another seven-year term in the November 2013 presidential election, but experts say that instability can undermine his popularity and is fraught with new violence.

"Given the recent events in Tajikistan, the presence of the Russian military base has become a necessary deterrent," said a Russian source.

"The Islamists are asleep and see that they come to power in Tajikistan. All this is aggravated by the possible consequences of the Americans leaving Afghanistan after two years."

NATO forces are planning to leave neighboring Afghanistan, and the West is negotiating with Dushanbe and Tashkent on the conditions for the transit of troops. Rakhmon emphasized his country's role, stating that an unnamed "other countries" would like to acquire a military base in Tajikistan.

Rakhmon and then-former Russian President Dmitry Medvedev announced in September 2011 that they had agreed to extend the deployment of the Russian military base by another 49 years, but did not fix it on paper, while continuing to discuss the conditions.

Sources in Dushanbe say Putin can make a stop here in early October on his way to Pakistan. According to Pakistani press reports, a quadripartite meeting of the leaders of Afghanistan, Pakistan, Russia and Tajikistan is scheduled for October 3 in Islamabad.

"While the possibility of a visit by the Russian head of state in October on the way to or from Pakistan, where in any case he will hold a bilateral meeting with the President of Tajikistan (Imomali Rahmon), is being settled," a Russian source said.

ARMY OF THE HUNGRY

The base in Tajikistan has 6.000 military personnel stationed near the cities of Dushanbe, Kulyab and Kurgan-Tyube, and is the largest land Russian military facility located outside Russia.

The government of Tajikistan fears public anger against the background of persistent poverty and speeches in Arab countries and is seeking support from Moscow, an expert on Central Asia, Jamshed Kadyrov, told Reuters.

"Tajikistan has nothing else to do: the country's leadership understands perfectly well that being alone in the middle of such an important strategic node is not the best option," he said.

“The Russian military base currently represents a kind of umbrella that protects against the influence or aggression of other countries,” said Kadyrov, who recently moved from Dushanbe to Moscow, like the million of his fellow citizens who cannot find work at home.

Russia fears that the influence of the Taliban and other radical movements in neighboring Afghanistan, which has a common 1.344-kilometer border with Tajikistan, may spill over to the southern borders of the CIS, and sees its base in the republic as a deterrent.

Dushanbe has little own forces, the expert believes.

“The recent events in (center of Badakhshan) Khorog showed that in the event of a major hotbed of military tension, the country's military forces would be very tight,” said Kadyrov.

The Tajik army consists mainly of representatives of the poorest segments of the population. Small allowances for officers forced many of them to go to Russia - to serve in her army or become a guest worker. About one million Tajik citizens work in Russia alone. Local media reported that Tajik soldiers during the operation in Badakhshan appealed to the local population to feed them.