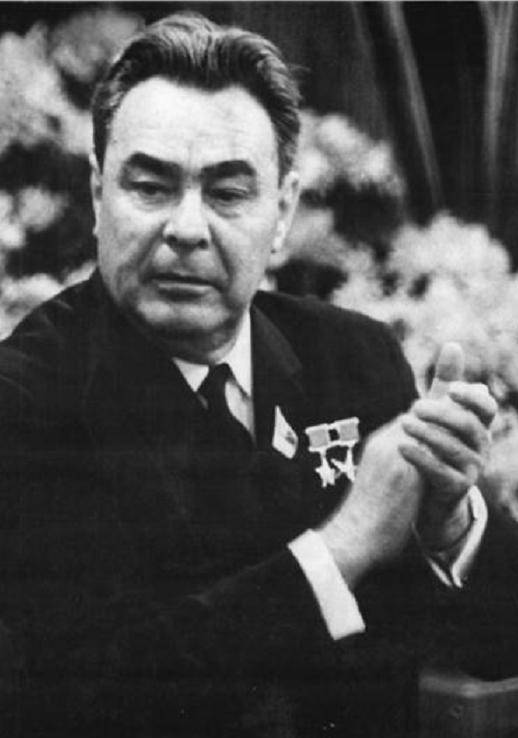 On November 10, a deep old man with an extremely worn-out body died in the District of Moscow. Since 1976, this old man has held on to this world only through the efforts of doctors, he survived a heart attack, clinical death, suffered from asthenia, was in drug dependence on sleeping pills ... He had a wrong diction, old age sharpened his love for the outside, and Leonid Ilyich became the author of memoirs about Malaya Zemlya and four times as a Hero, holder of the Order of Victory, and in the last years of his life he ruled occasionally, quoting a sad joke of that time without regaining consciousness.


His family was also in disorder, over which he had lost control. There has been disorder in the country in recent years, not the same, of course, as ten years later, but everything went somehow by inertia, and changes were really needed.

But this is Brezhnev late, because people are different at different periods of life, this is a truth that is often forgotten. In youth we are hot and unrestrained, in maturity we are already different, and by old age ...

Brezhnev was not just old, he was very seriously ill. Now, of course, 75 years is not so fatal, but this is for people who did not survive the Civil, industrialization, did not fight in the Patriotic War, did not work in the Stalin era, burning themselves, both at the front and in the rear. That generation was different, and its fate was probably the most difficult in stories our country. Something comparable people survived only in the era of Troubles and the Mongol-Tatar invasion.

Leonid Ilyich was born in 1906, exactly during the First Revolution, after the defeat in the Russo-Japanese War. The country was in a fever, shots were fired, rallies, strikes and terrorist attacks were the daily norm. I went to the gymnasium in 1915, when the First World War was already on fire, and finished it in 1921, just with the end of the Civil War and the beginning of the NEP. In the first 15 years of his life - two revolutions and two wars. And the accompanying devastation and poverty. Taking into account the origin (father is a metallurgical worker, mother is from a family of Donbass workers), he was lucky: the revolution opened up many prospects for his generation.

We must pay tribute to Brezhnev, like many young people of that era, he realized his chance in life and used it in everything: Komsomol - technical school - university - army - party career. Unlike the generation of revolutionaries, Leonid Ilyich was a technician to the core. Land surveyor, mechanic engineer, heating engineer, tank lieutenant. It was the same Stalinist youth who opened up all roads and dizzying prospects, as soon as they studied and worked.

He worked and approached the war as the secretary of the Dnepropetrovsk regional committee for the defense industry. The Dnepropetrovsk region in the USSR is an industrial one, it is a huge number of enterprises, these are universities and technical schools, the production of advanced products. And the firing position - everyone felt the approach of war, and Moscow demanded weapon - a lot and of high quality. A 35-year-old engineer with the rank of lieutenant was responsible for this.

He coped, a trait of Brezhnev's character - he always coped and was not afraid to make decisions, without passing, however, a certain line of risk. And he went to war right away, to the political department, of course, but to send an experienced party worker who studied Tanks in 1935, it would have been foolish to join the tank troops for the position of a commander. We have a traditional bias towards commissioners, but:

In repelling the German offensive, the head of the political department of the 18th Army, Colonel Comrade Brezhnev. The crew of one heavy machine gun (privates Kadyrov, Abdurzakov, from the replenishment) was confused and did not open fire in time. Two platoons of Germans, taking advantage of this, crept up to our positions to throw a grenade. Comrade Brezhnev physically influenced the machine gunners and forced them to join the battle. Having suffered significant losses, the Germans retreated, leaving several wounded on the battlefield. By order of Comrade. Brezhnev's crew conducted targeted fire on them until they destroyed them.
I'll leave the readers to think about what “physically affected” means, personally it seems to me that it all boiled down to good slaps in the face, and the thing, in general, is common in war, it's beautiful in the movies, but in reality it's scary to the point of stupidity, especially in the first battle. I didn’t shoot, I will note, I didn’t put him under the tribunal, but brought him to his senses. And he himself did not get lost, and he visited the front line, on the same later ridiculed Malaya Zemlya more than forty times. But there was also that meat grinder, local, of course, but the bullets and shrapnel do not care. Awards, injury and concussion remained in memory.

Major General and Order Bearer Brezhnev headed (together with Eremenko) the combined regiment of the 4th Ukrainian Front, and from 1946 he returned to his homeland - the head of the regional committees of Zaporozhye and Dnepropetrovsk, then the level of the Republic - Moldova, and since 1952 - the Central Committee.

What is remarkable about his biography?

In comparison with the previous generation, Brezhnev went through all the steps of the career ladder, received a solid education (both military and civilian), unlike many of his peers (the same Andropov), he fought at the front for real, and in peacetime he really worked and not only in leadership positions. He was not a party apparatchik, not a professional chatterbox, but a techie with vast (by 46 years of age) experience. And his career is deserved - he coped with everything entrusted to him. Plus it was not stained by the intrigues of the old Bolsheviks.

In the Central Committee, Brezhnev's posts, again, are not decorative - supervising astronautics and the construction of Baikonur are worth something. And what about virgin lands? Yes, the idea itself was not ideal, but Brezhnev is not the initiator, Brezhnev is the performer, but he coped, however, as always. And then there was the Presidium of the Supreme Soviet and the removal of Khrushchev.

Nikita Sergeevich, in general, is a special conversation - the last old Bolshevik in power, ideological, but illiterate, ambitious and impulsive, he was an irritant for Brezhnev's generation: both an unjustified inclination to take risks and elementary illiteracy in many issues. And Khrushchev's anti-Stalinism, crossing all boundaries of reason, with general rehabilitation, denigration of the era and attempts to raise its authority at the expense of its predecessors, could not but irritate the professionals who grew up in the era of Stalin.

To this should be added adventurism in ideological issues, all these "catch up and overtake" for people who know how it really is - it was stupidity, and for experienced party workers building communism in 20 years - and ideological sabotage. Well, techies, who know how it works, could not tolerate a person with the intellectual level of a good worker for a long time. And among the candidates, a charming front-line soldier, experienced and without a thirst for power, but able to work collegially, was number one.

At the head of the country

Actually, there were two Brezhnevs at the head of the Union - the first, who achieved parity with the United States, negotiated detente, being able not to give up positions in the process, which was proved by Czechoslovakia, which weakened ideological pressure without lowering the reins, like Nikita Sergeevich, in which the well-being of the population was slowly but surely growing, and old problems were gradually being solved.

From ideology - where from Khrushchev's manilovism and zoological anti-Stalinism they switched to sane politics.

It can be argued that Suslov's doctrinaire was destroying the idea, but Brezhnev was not just an ideological one, he always saw in the idea an instrument that it is simply dangerous to swing around, shifting the steering wheel as he pleases.

And before the economy - where exactly under Brezhnev were the first attempts at reform.

You must understand that time - the country, outwardly great and mighty, was seriously undermined by many factors. These are two big wars in half a century, with tens of millions of victims, and the best died, and the breaking of the traditional order, with the resettlement of the village into the city and the clash of the foundations of the old and new townspeople, and repression, and Khrushchev's discrediting of the past, and experiments with atheism in a deeply religious people ...

All this had to be smoothed out, calmed down, brought to some kind of denominator, and, finally, the problems - security, housing, food - had to be solved.

The state was sick, it could not be healthy after all that it had gone through. Peace was needed, years without abrupt changes, and Brezhnev provided them. It was under him that generations were born who, at last, lived without war, without social experiments and with firm guarantees, albeit modest, but prosperity.

And this is the merit of Leonid Ilyich and his team.

The country stopped, caught its breath, calmed down and finally stopped being afraid tomorrow.

Another thing is Brezhnev late, who let go of the steering wheel and after 1976 powerlessly watched the squabble of his comrades-in-arms. It is the second half of the 70s that is stagnation, Afghan madness, the breakdown of detente and insanely expensive weapons programs, with an emphasis on preparations for a new edition of the Second World War in the nuclear missile era.

It was during these years that the money supply grows, the deficit grows, and the people begin to feel some discomfort, mild, but still. This was evident in the social dimension - the growth of crime, alcoholism, hazing in the army.

I remember a conversation between Leonid Ilyich and his wife somewhere in 1977-1978. And my grandmother said, and later it appeared in the press that he wanted to retire, retire ... they did not let him go. They said: Leonid Ilyich, well, as a country without you, you are our holy, golden sun. Persuaded to stay.
Leonid Ilyich understood everything and realized everything, his mistake was not that he remained in that system, he would not have been dismissed from his post, his mistake was that there was no next generation of politicians prepared for the highest posts.

Stalin is often blamed for the absence of a successor, but the Brezhnev team are the successors who were raised, and at the right moment they seized power.

They picked it up, but the system itself did not change. A young group in the Politburo was not created that was ready to take power and understood why it was necessary and where to lead the country.

And the second mistake - no restrictions on power, neither in age nor in health, have been created.

For contemporaries, the Brezhnev era remained a golden age.

For the older generation - rest and peace, stability and abundance. Now, in the era of a surplus of goods, this is ridiculous, but for people of that time, remembering poverty and hunger ...

For the Brezhnev youth, it is a time of stability. There is no return to that era, but not to admit that she was well-fed and calm, and Brezhnev is a ruler, of course, not great in understanding the victories and breakdowns of society, but loved by many.

And he was a good man, and this is a rarity in politics. But his death at the post launched the processes of collapse, and this is also a fact.