Battle of the Mariana Islands. Rehearsal for the smash in Leyte Gulf

November 12, 2021
13
Decisive Marine Success aviation United States in the Philippine Sea, which brought victory in World War II closer. Read on for the new material from the creators of World of Warships!


The Pacific Ocean is the largest ocean on the planet. During World War II, these vast expanses of water and the thousands of islands scattered across them became a battlefield for the fleets of the Japanese Empire and the United States of America. It was here that the largest naval battles of World War II took place.

If in the early stages of the war the Imperial Navy won confident victories, then soon the initiative passed to the Americans. At the beginning of 1944, Japan could only defend itself. The imperial command continued to stubbornly believe that it could impose a general battle on the enemy and win. But in reality, this only delayed the inevitable defeat. The Americans were superior in numbers, technical support, and the level of training of the flight crew. The latter was especially lacking in Japan, since it was aviation that determined the principles of the war in the Pacific.

By the summer of 1944, the Japanese command had adopted Operational Plan A. The new line of defense was to pass through the central part of the Mariana Islands to Palau and south to New Guinea. The imperial admirals were well aware that the Mariana Archipelago, remote from the Japanese Islands, would become the base of the US strategic aviation. For the Americans, the seizure of these islands would make it possible to deploy squadrons of long-range bombers for subsequent attacks on enemy territory. 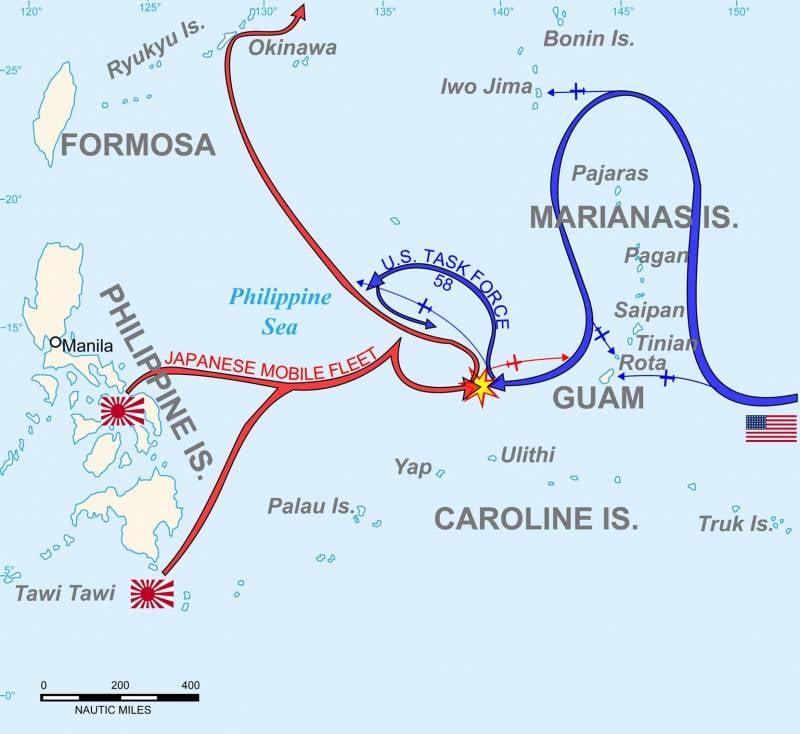 Map of the Mariana Islands and the Pacific Ocean, where the battle unfolded on June 19-20, 1944
To break through the Japanese defense line, the Americans sent the 5th Fleet under the command of Admiral Raymond Spruance. On June 11, carrier-based aircraft began to strike at Japanese positions on the islands. The 1st Air Fleet protecting them was partially destroyed. Already on June 15, two marine divisions landed on the island of Saipan - bloody battles for the island began. The Japanese command immediately reacted to this, on the same day ordering the commander of the First mobile fleet Vice Admiral Jisaburo Ozawa to attack and destroy enemy troops. However, the ships needed time to refuel, and the fleet was brought to full combat readiness only on the 19th.

The forces of the Imperial Navy consisted of 5 heavy and 4 light aircraft carriers, 5 battleships, 13 cruisers, 23 destroyers and 6 tankers. Air groups numbered up to 440 different carrier-based aircraft. At the same time, Ozawa received from Vice Admiral Kakuta false reports on the state of air groups based on the islands. When the forces of the aircraft carrier were preparing to strike the enemy, the coastal aviation practically ceased to exist. Thus, Ozawa was forced to rely only on his own strength.

Meanwhile, Admiral Spruence received a report on the movement of enemy naval forces on 15 June. Task Force 58 was sent under the command of Vice Admiral Mark Mitscher. It included 7 heavy and 8 light aircraft carriers, which carried up to 900 aircraft. The compound was covered by 7 battleships, 21 cruisers and 67 destroyers.

Admiral Ozawa correctly assumed that the American fleet would be located near the landing sites to cover the landing. Therefore, he had great freedom of action while on the high seas. On June 18, two of the Japanese reconnaissance aircraft spotted and positioned American units several times, but Ozawa did not decide to launch an attack until the next morning. This could have come as an unpleasant surprise for the Americans, since they had absolutely no expectation of attacks that day.

On the night of June 19, an exchange of messages took place between the headquarters of Spruance and Mitscher. The latter suggested that they come closer to the Japanese overnight and strike in the morning. Spruance, in turn, ordered the operation to continue to protect the huge amphibious fleet against Saipan. 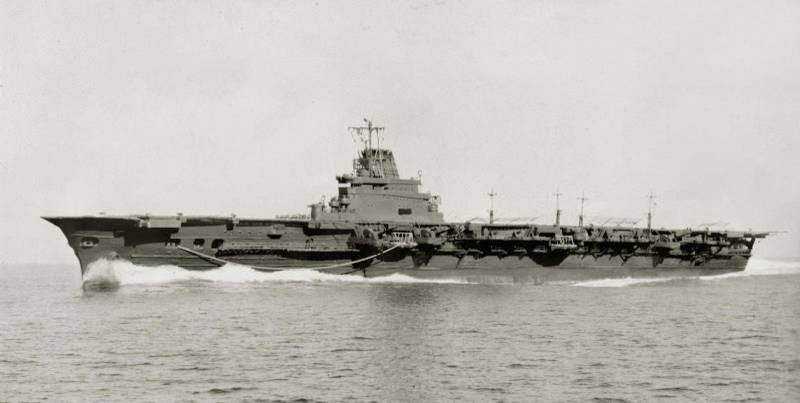 Japanese aircraft carrier IJN Taiho
From 3 to 4 in the morning, Ozawa's formation lined up in battle formation. Mindful of the mistakes of past battles, the admiral ordered battleships and cruisers to raise 16 reconnaissance aircraft. At 05:15 the second group of scouts took off - 13 carrier-based aircraft and 1 seaplane. At 07:30, the scouts of the first group noticed one of the American formations, after which Ozawa ordered to prepare the air groups for departure. The first wave of 59 aircraft rose from the division of aircraft carriers of Admiral Obayashi. Basically, these were "Zero", equipped with 250-kg bombs. A little later, other Japanese aircraft carriers began to release their groups. By 9 o'clock in the morning, another 129 vehicles took off.

Around 10 am, radar operators from the American battleship Alabama made contact with multiple air targets. Admiral Mitscher ordered to double-check the data. As soon as confirmation came from the battleship Iowa, an alarm was declared throughout the compound. The dive bombers and torpedo bombers preparing for takeoff were lifted into the air to clear the take-off decks of the ships for the fighters. While the Japanese delayed the attack, the Americans managed to lift up to 30 Grumman F6F Hellcat into the air. They intercepted the first wave of Japanese. The planes that broke through were stopped by a wall of fire created by anti-aircraft gunners from the ships. During this attack, more than 40 Japanese aircraft were destroyed, while the Americans lost only 1 fighter. The battleship South Dakota was hit by a 250-kg bomb (50 casualties were killed and wounded), and a wounded plane crashed into Indiana, which did not cause much damage to the ship.

A larger second wave of Japanese aircraft attacked an hour later. But, as in the previous time, most of the attackers were met by American fighters. Significantly superior to the Japanese in flight skills and quality of technology, American pilots shot down one plane after another. A small group that managed to break through the interceptors came under heavy air defense fire from the battleships. Only 6 D4Y Judy and a few B6N Jill were able to reach the carriers, but the close explosions of their dropped bombs did little to no damage. 4 people were killed on American ships and several dozen more were wounded. The Japanese used a small decoy-targeting trick: special planes dropped dipole reflectors to create false targets for radars. 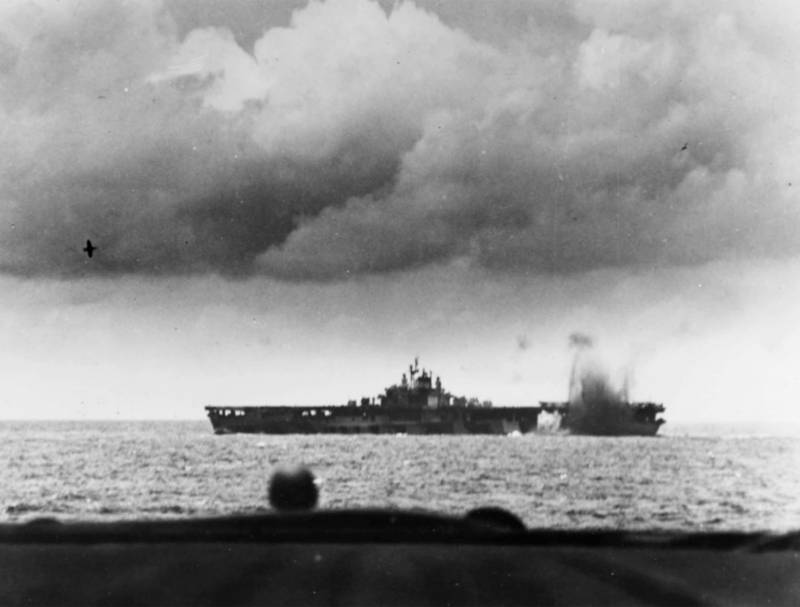 American aircraft carrier USS Bunker Hill during the battle on June 19, 1944
At 10 o'clock in the morning, Ozawa flew into the air for the third wave - 47 aircraft. They wandered for a long time over the endless expanses of the Pacific Ocean. Some of the pilots got involved in combat with American fighters, and 7 of them were shot down. The fourth wave, numbering 82 aircraft, was directed to the point where the American aircraft carriers were discovered by the scout. But its coordinates were transmitted incorrectly. According to the plan, the squadrons did not return to the aircraft carriers, but headed for the ground bases. Most of the fourth wave was detected by the radar of American ships stationed in the Guam region. And then it was intercepted by fighters pointed at them from aircraft carriers, who were on duty in the air, already during the landing approach. Only 9 aircraft managed to reach their airfields in Guam.

For the whole day, American aircraft did not attack Admiral Ozawa's compound. But the American submarines, which were on duty in the patrol areas established for them, had an excellent opportunity to solve everything on their own. Already at 9 am on June 19, the Albacore submarine was the first to open an account in this battle. Its commander spotted the Japanese squadron and launched an attack on the large aircraft carrier Taihō. A fan of 6 torpedoes was fired, of which only one hit the ship. Another torpedo was destroyed by the Zero pilot, who sent his fighter into it. It seemed that the aircraft carrier had collected a small amount of water and could safely move on. But this was affected by poor training of emergency teams. Gradually, gasoline vapors from the damaged tanks began to fill the hangar. From about 14:32, explosions were constantly occurring on board, and at 16:28 Taihō banked to the port side and sank. 28 officers and 632 sailors were killed, more than 1000 people were rescued.

At 10:52 am, another submarine, Cavalla, spotted a Japanese aircraft carrier with escort ships approaching it. It was Shōkaku. The submarine took a comfortable position and fired a volley of six torpedoes from a short distance - 3 of them hit the target. The damage to the ship turned out to be critical: fires blazed everywhere and aviation ammunition exploded. At 14 o'clock, the aircraft carrier sank. Escort ships rescued only 570 people out of nearly 1800 on board.

Ozawa decided to continue the attacks - on the 20th, the ships were supposed to take fuel, put in order the materiel of aviation and strike on June 21. Admiral Spruence received information about the location of the Imperial Navy at about 16 pm while refueling. Admiral Mitscher decided to attack, despite the late time - in this case, the returning aircraft would have to board the aircraft carriers already in the dark.

More than 200 American aircraft headed towards the target. For protection, the Japanese were able to deploy only 35 carrier-based fighters. While the fighters on both sides were engaged in aerial combat, the attack aircraft broke through to the squadron. Attacks began on various Japanese ships, primarily aircraft carriers. So, Hiyō got hit by 2 torpedoes, after which an explosion occurred on it, and the ship sank. Zuikaku received one direct bomb hit, and several more bombs went off near the aircraft carrier. His emergency teams were able to take control of the situation. The aircraft carriers Jun'yō, Ryūhō, Chiyoda, battleship Haruna were also damaged, and 2 tankers were sunk. After that, Admiral Ozawa ordered to inflict a night strike on the enemy by surface ships. But about 21 hours from the commander of the United Fleet, Admiral Toyoda, an order was received to withdraw. 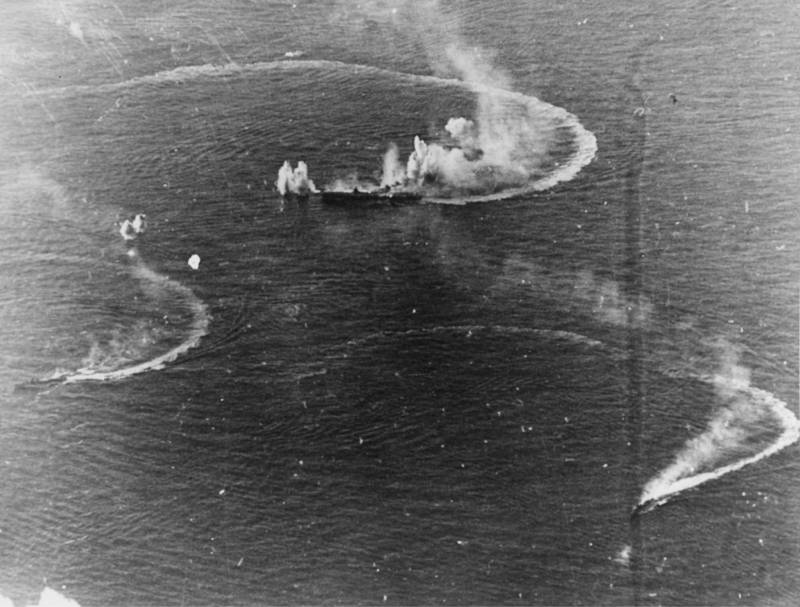 Japanese aircraft carrier IJN Zuikaku with escort ships under attack by American aircraft, June 20, 1944
The Americans lost 20 aircraft during this battle. And when the sun went down, they had to solve the most difficult task - to land the returning aircraft on aircraft carriers. Many pilots did not have this kind of experience, so 80 cars were lost.

With this, the battle in the Philippine Sea, or the Battle of the Mariana Islands, ended. The unit of Admiral Ozawa, which was much inferior to the American in strength, initially had no chance of victory. In 2 days, the Imperial Navy suffered a crushing defeat. Out of 400 planes, the Japanese had no more than 50. Most of them were shot down by American fighters. Hence another unofficial name for this battle - "The Big Hunt for Turkeys on the Marianas".

The Battle of the Mariana Islands almost completely disabled Japanese aircraft carriers. Now the Imperial Navy was forced to go exclusively to the defensive. With the fall of Saipan and Guam, the Americans acquired long-range aviation bases, and raids on Japan became regular. It was a big step towards victory in the war, although it was even more than a year before it.

Learn how US carrier-based aircraft became the main strike force of the fleet destined to decide the outcome of the war in the Pacific. A documentary from Wargaming tells history its origin and development before and during the Second World War.