Why Russia and China will not fight with each other ("Sublime Oblivion", USA) 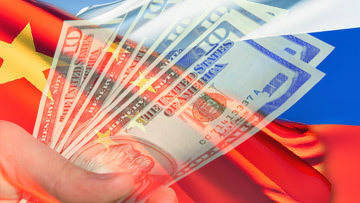 From time to time someone declares, not only in the Western press, but also in the Russian, that China (on the rise, but overcrowded) is doomed to destiny to fight with Russia (sick and crumbling) for the resources of the Far East (They also say that Russia is already enduring a “demographic invasion,” and Siberia is rapidly Sinic. It is not, and I showed it in one of my old postings about the “yellow danger myth”. "). For reasons that generally should be obvious, in the coming decades it is absolutely impossible. But let's explain these reasons anyway.

1. China considers India, Japan and, above all, the United States, its main potential enemies. This is connected with three geopolitical goals set for themselves: a) preserving the integrity of the country and the hegemony of the CCP, which is especially threatened by opponents who inflame nationalist sentiments among ethnic minorities (India — Tibetans, Turkey — Uygurs) and bribe the trade elite of the coastal regions (Japan, USA); b) the return of Taiwan; c) seizure of hegemony in the South China Sea and ensuring the safety of routes for the delivery of resources by water. The main obstacles to the achievement of the first two goals are the “dangerous democratic countries” represented by Japan and India, and the USA looms in the background. China regards the northern border as safe, and, in general, Russia and Central Asia seem to be a more reliable source of natural resources than the ocean routes.

2. But even if all this is not so. Of course, in the case of waging war with conventional means, it is now very likely that Russia will not be able to defend its possessions in the Far East due to the qualitative parity achieved by China, a very significant numerical superiority and an enormous positional advantage. If the United States and Japan do not intervene, and their intervention is unlikely, although it is possible, if Russia makes big concessions (gives up the Kuriles, gives the right to use the resource base of Siberia), defeat and subsequent occupation are guaranteed. BUT...

All this without nuclear weapons. After the post-Soviet demilitarization, it became clear that any war involving NATO or China would most likely become atomic. The official military doctrine allows the use of nuclear weapons against nuclear powers in the defense against non-nuclear attack; on military exercises held in the post-Soviet era, the use of tactical nuclear weapons was openly practiced in order to weaken the onslaught of the enemy during the retreat of the Russian army using the scorched-earth tactics. Now Russia has significantly fewer tactical nuclear weapons than it did in the past (its maximum number reached 16 thousands of units), but most likely it still has several thousand (unlike strategic platforms, no one inspects or checks them), and it's hard to imagine how the Chinese invasion will repel them.

Yes, if someone doubts that the Russians will strike at their territory with nuclear weapons, the Russian Far East is extremely poorly populated, and the air explosions, with which they will most likely hit enemy divisions, almost do not lead to radioactive fallout.

“Unfortunately, it does not guarantee rescue and nuclear weapons, because China also has them. Yes, so far we have superiority in strategic nuclear forces, but they are rapidly declining. At the same time, we have no medium-range ballistic missiles, while China just has them, which almost eliminates their lag in intercontinental ballistic missiles ... As for the exchange of strikes of strategic nuclear forces, the Chinese potential is more than enough to destroy the main European cities Russia, which they do not need (there are a lot of people and few resources). There are very strong suspicions that, realizing this, the Kremlin will not use nuclear weapons. Therefore, nuclear deterrence against China is an absolute myth. ”

This is not true. And that's why:

3 As far as we know, China adheres to a position of limited deterrence, its nuclear forces are constantly being modernized, but their numbers are small in comparison with the United States and Russia (this may change in the future or may not change). The sharp decline in the number of Russian arsenals in the post-Soviet period has almost ceased and, judging by recent trends, most likely will not resume. This is not surprising, the whole of Russia, of course, understands that it is the nuclear forces that most guarantee its security.

3-b. Besides the fact that China’s medium-range missiles still do not reach the center of the European part of Russia, even in this parameter it is very much inferior to Russia. “In July, 2010, the Russian strategic forces had six hundred and five strategic delivery vehicles capable of carrying nuclear warheads to the 2.” As of 667, China has an estimated ninety intercontinental ballistic missiles (without split warheads) capable of reaching cities in the European part of Russia, and several hundred medium and short-range ballistic missiles. The latter will completely devastate the inhabited regions of the Russian Far East and, to a lesser extent, the regions east of the Urals, but these are not the main territories of Russia, relatively few population and industrial facilities are concentrated there. In any case, most likely, they will not be used against the cities of Siberia, but against military and strategic sites.

3-in. It is also necessary to take into account the system of protection against ballistic missiles, civil defense and geographical factor. China has more C-300 missile systems; recently, it demonstrated the ability to shoot down ballistic missiles at the exercises, but there is no doubt that Russia is the first in this field. The C-400 systems now being replaced by the C-300 are equipped with an integrated anti-missile defense system, and thanks to the Moscow anti-missile defense systems A-135 with nuclear-interceptor missiles, the chances that the capital will survive more than high.

Both China and Russia are taking significant measures in the field of civil defense. According to the CIA, in 1986 the USSR had shelters that could accommodate about 11,2 percent of the urban population. By 2001, for Moscow this indicator reached, as it is supposed, 50 percent, and the construction of new bunkers continues. China also has large-scale civil defense projects and is building bunkers in major cities.

At first glance, it seems that from a geographical point of view, China has an advantage in the form of a gigantic population, a large territory and a higher proportion of rural residents. The population of Russia lives mainly in cities and, it would seem, more vulnerable. This, however, is not the case. Most of the population, fertile land and industry in China are concentrated on its east coast, as well as in the valleys of the great rivers. In a few years after a large-scale exchange of nuclear strikes, the level of agricultural productivity will fall dramatically, leading to famine, as it has already led more than once stories China, and also, perhaps, to anarchy and the death of the ruling dynasty (in this case - the CCP). Even if one succeeds in “conquering” the Russian Far East, it is unlikely that this will smooth out the population pressure that has suddenly become critical, since the construction of infrastructure for large settlements in this frosty, barren and mountainous region will stretch for decades. Russian agriculture is dispersed over a large area and to a lesser extent relies on equipment and fertilizers, and almost every year generates a substantial surplus for export, so it is less likely that Russia will fall into total hunger, like China.

3-g. The real outcome of the atomic war between Russia and China will be the following. Russia will be crippled, lose twenty to thirty million people, and tens of millions more will be on the verge of survival; the Far East will be lost, but the state will remain and the deterrent nuclear potential will remain. China, on the other hand, will fall apart and lose ninety percent of its industry, plunging into the abyss of mass starvation and anarchy, and for the foreseeable future will be out of the game being played around the Big Power. Two tragic, but at the same time different from each other post-war scenario, as Herman Kahn would have put it.

4. Of course, the Chinese strategists understand all of the above, which means they can in no way have any serious medium-term plans to seize Russian territory. This cannot be said of Taiwan and the South China Sea, where China’s interests are greater and do not fundamentally affect US security interests, so they will not consider the possibility of applying their most superior arsenal against China, risking the destruction of Los Angeles, San Francisco and a dozen more cities on the Pacific coast. This corresponds to the main objective of the long-term strategy of "minimum deterrence" adopted by China.

The strategic balance, of course, is not set in stone, and perhaps future changes will make the situation more dangerous for 2030 – 2050. It is possible: a) to create truly effective systems to counter ballistic missiles; b) the growing internal problems of China in connection with global warming and depletion of coal reserves; c) the emergence of the possibility of active settlement of the deep territories of the Russian Far East and Siberia due to the same global warming. But all this is just speculation, and the fact is that both the Chinese and the Russians act more or less rationally, which means that the probability of a full-scale war between them is extremely close to zero, whatever the fans of sensations might say.