17 September 2012
0
Any aircraft has a heart, which is its engine. It was rather difficult to copy the German powerful and advanced liquid-propelled Walter liquid-propellant rocket engine, since it worked on specific fuel components for the production of which in the USSR there was no industrial base. Also, there were domestic similar developments.

By this time, design teams under the leadership of Dushkin LS, Glushko VP specialized in the development of liquid rocket engines. and Isaeva AM Dushkineny created the most powerful engines: in 1942, the D-1А-1100 engine for the BI (thrust 1100 kg) and in 1944, the RD-2М for 302 (thrust 1400 kg). However, the reliability of data LRE left much to be desired. Isaev upgraded the D-1 A-1100, as a result of which its reliability increased, and the resource increased to one hour. In 1945, the engine under the designation RD-1M successfully passed the state. trials. Glushkov for the La-7 and Yak-3 aircraft was created accelerator RD-1, having thrust 300 kilograms, and also developed on the basis of this accelerator three-and four-chamber liquid rocket engines with kilograms in 900 and 1200 kilograms (data of LRE did not receive continued) .

Meanwhile, Dushkinin, who worked at the Scientific Research Institute-1 NCAP, created the RD-2М3В liquid-propellant rocket engine. The LRE worked on nitric acid and kerosene and had a pumping fuel supply. The main feature of the engine was the presence of two cameras - a large, having a thrust of 1100 kg and a small one with a load of 300 kg. This made it possible to take off and gain height with the maximum load while both cameras were working simultaneously, after which further horizontal flight, search for targets and attack occurred only on the 300 kg load (the large camera was turned off). Due to this significantly increased flight duration and fuel economy. The solution is progressive, since otherwise it would be very difficult to throttle the thrust of a liquid rocket engine at high altitudes, where maximum thrust is not required.

Initially it was assumed that this rocket engine will be installed on the Malyutka missile interceptor assigned to N.N. Polikarpov. still in 1944 goto. However, the sudden death of the aircraft was not allowed to finish the work.

In May, the 1945 of the year during the state tests of the RD-2MZV was obtained total take-off thrust 1,5 thousand kg, the minimum - 500 kg and nominal - 1250 kg. When the small camera was operating, the minimum thrust was 100 kg, the maximum 300 kg. The specific thrust per kilogram of fuel when both chambers are working simultaneously, or when one small chamber is operating in the maximum thrust mode was equal to 200 kilograms. The mass of the liquid-propellant rocket engine and all units is 224 kg. It was planned to release 30 engine kits, the first copy should have been given 10 March, and the last - 10 August 1946 year.

The engine was supposed to be manufactured by plant No. XXUMX in cooperation with other enterprises, and the assembly and control tests were to be carried out at SRI-165.

Formation of a new pilot aircraft construction plan for the People’s Commissariat aviation industry was facilitated by the fact that since February 1946 it was headed by M. Khrunichev A change of leadership of the air force (Vershinin K.A. instead of Novikov A.A.) occurred only in March, so at this time the disgraced command was practically turned off from the decision-making process.

It would seem that the successful approval of the new plan for the IAP was clouded by an internal scandal. At that time, an experimental aircraft with a liquid-propellant rocket engine built by engineer I.F. (in some documents the designer was Bolkhovitinov V.F.).

This work began 2 year before the described events, when 18 February 1944, by the decree of GFCS No. 5201, was assigned to the Institute of Jet Technology NII-1, transferred to the People's Commissariat of Aviation Industry, to develop jet engines. Led by NII-1 Fedorov PI, the former head of the scientific research institute of the Air Force, and V.F. Bolkhovitinov became deputy. - The creator of the aircraft "BI".

The people who headed NII-1 were not indifferent to aircraft building. In addition to the main work on the Dushkin and Isaev liquid propellant rocket engines, as well as AM Lyulka's turbojet engine, they decided to build an experimental aircraft designed by Florov and Bolkhovitinov. The task was approved by the 18-th General Directorate of the NCAA, responsible for jet technology. 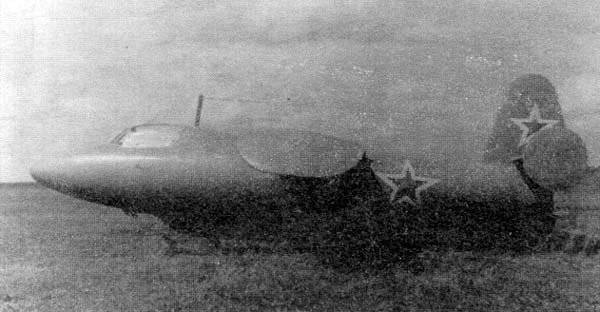 Both aircraft were designed to study liquid-propellant rocket engines, and aerodynamics at high flight speeds. In addition, they were intended to formulate the law of pressure distribution along the profile and magnitude of the loads that were obtained in flight, in the zone of occurrence of the wave crisis. In total, it was planned to build six copies of the aircraft: the first two - for training flight crews, four - for carrying out experiments. The institute did not have sufficient production capacity, so the gliders were built in the Gorky aircraft factory number XXUMX them. Sergo Ordzhonikidze. 21 developed working drawings, and the production of aircraft began. In March of the same year, the assembly shop had to leave the first two cars.

But the new leaders of the aviation industry reacted negatively to this aircraft, believing that NII-1 is engaged in an unusual business. In this regard, after the release of the decision of the Council of People's Commissars, funding for the creation of a prototype Florov aircraft ceased.

With this decision, the developers did not agree. Y.L. Bibikov, the new head of the Scientific Research Institute-1 and Bolkhovitinov wrote directly to Stalin that the first flight copy of the 01.04.1946 was about 70% ready, and if the work was continued, the aircraft would come to flight testing by 01.07.1946. The Deputy Chairman of the USSR Council of Ministers, N.A. Voznesensky, who oversaw aviation after Malenkov, who had fallen into disgrace, gave the command to Vershinin and Khrunichev to figure out and report on their proposals. Khrunichev immediately got a "tooth" on the complainants, but first he had to respond to the request.

Commander-in-Chief of the Air Force Marshal of Aviation Vershinin KA had a weakness for analysis and scientific approach, especially in the field of military perspective aircraft. He was offended that the pilot aircraft plan was approved without coordination with the air force. Therefore, together with the new chief engineer of the Air Force, Colonel-General NASOV I.V. supported the developers: "... The experimental fighter-interceptor of the construction of Comrade Florov, which is being built at Scientific Research Institute-1 MAP, is of undoubted interest because, according to its data, it is an aircraft exceeding the climb rate and speed of the fighters in the building.

The construction and testing of this aircraft ensures the development of measures to further increase the speeds of combat aircraft ... I consider it necessary to provide the Scientific Research Institute-1 MAP with the opportunity to complete work on creating an experimental aircraft of the Florov design and conduct flight tests of this aircraft in 1946. "

Khrunichev did not give up. His answer contained the following: "According to your instructions from a letter from comrades Bolkhovitinov and Bibikov, I report that the stated characteristics of the experimental aircraft of the SRI-1 having a liquid propellant rocket are questionable. To verify the reality of the data, a highly qualified commission was appointed consisting of specialists of the ministry ...".

In the commission headed by Professor O. Ostoslavsky included: Chief Designer of OKB-155 Mikoyan A.I., Head of the Department of TsAGI Matveev V.N., Head of the Seventh GU IAP Loktev I.V. and the head of the department of the eighth GU MAP Yakovlevsky V.V. Commission to the beginning of June 1946 of the year submitted the following conclusion: "... the maximum speed will be about 950 km / h instead of the stated 1100 km / h, and the ceiling will be limited to a height of 13 thousand m instead of 20 thousand m, due to the lack of hermetic cockpit on the plane. The flight duration stated in the letter is 46 minutes, the commission found that the maximum flight duration would be about 5 minutes. "

In particular, the commission was based on the fact that the aerodynamic configuration with a straight wing, developed in 1944, did not allow to reach the speeds stated in the project. But Florov insisted that the plane was made in accordance with the requirements of the strength requirements and with the use of high-speed wing profiles recommended by TsAGI. The designer argued that there were no more recent recommendations. Despite the conclusion of the commission, MAP was ordered to finish building an experimental copy of the "4302" and conduct flight tests.

The complaint Bolkhovitinova Bibikova them quickly backfired. In September, 1946, at the MAP board, Khrunichev attacked the management of the Scientific Research Institute-1 with criticism and demanded to restructure his activities in the direction of not scientific but scientific work. The minister ordered the design groups to be removed from the institute, transferring them to an independent experimental production base.

Keldysh M.V. appointed head of the Institute-1. The institute has three teams left: OKB-1 (head Dushkin LS), OKB-2 (head Isaev AM) and OKB-3 (under the leadership of MM Bondaryuk). The institute also included the powder accelerator department. KB Florov I.F. disbanded order Khrunichev. The personnel and production base were transferred to the designer Bisnovat.

NII-1 in this form existed for a year, and in 1948, it was poured into the Central Institute of Aviation Motors, where they transferred the Bondaryuk and Dushkin Design Bureau. KB Isayev, with his consent entered the Scientific Research Institute-88 of the Ministry of Structures, where he was engaged in the development of liquid rocket engines for anti-aircraft missiles.

Flight copy glider Florov I.F. (a copy of the first instance without an engine) by the autumn of the year 1946 was ready for testing and transported to the flight research institute, and the flight instance equipped with the engine Isayev ended in an assembly. MAP under pressure from the military was forced to continue at the LII to prepare the aircraft for testing. Of course, all of the above led to the fact that work on the experimental aircraft "4302" were deployed in much smaller amounts than planned.

The flights were conducted during 1947 of the year, 20 flights were performed in total, of which all but one in the glider version. This topic was not further developed, since the achievement of high speeds was already possible on airplanes equipped with turbojet engines.

The 4302 is a single-seat experimental all-metal monoplane. The straight wing had a constant cross-sectional span, without transverse V. To improve lateral stability and reduce the damping roll, the flippers (end parts of the wing) were bent down 45 degrees down. TsAGI 13145 wing profile, laminar, having a thickness of 13 percent. The fuselage of the aircraft had a cigar-shaped shape, a circular cross-section and a maximum diameter of 115, see. A towing lock was installed at the bottom of the bow, used for a motorless take-off in tow. Free-standing horizontal tail had round washers that complement the vertical tail. Structurally, the keel was one with the fuselage. Sheathing aileron and rudders metal. The chassis of the experimental aircraft "4302" was the most complex device of the aircraft. In the first flights, a non-retractable temporary chassis (three-core pyramid) with wheels from La 5 was used. Later "4302" was equipped with a landing ski, dumped trolley and tail heel.

Landing ski riveted, duralumin, with an outer casing made of stainless steel. The middle ski profile has two sockets for the bogie pins. Take-off three-wheeled cart was welded from two mutually perpendicular steel pipes. The main wheels are equipped with two-disc disc brakes, size 650x200 millimeters. The front twin wheels had a hydraulic Shimmy damper and a millimeter size 400x150. Coupling the carts and skis carried out locking hooks. To reduce the mileage of the truck after it was dumped, a brake system was mounted on it that worked after opening the hooks. The dumping of the trolley took place simultaneously with the movement of retracting the landing skis (pressing it to the fuselage). The ski had a hydraulic shock absorber.