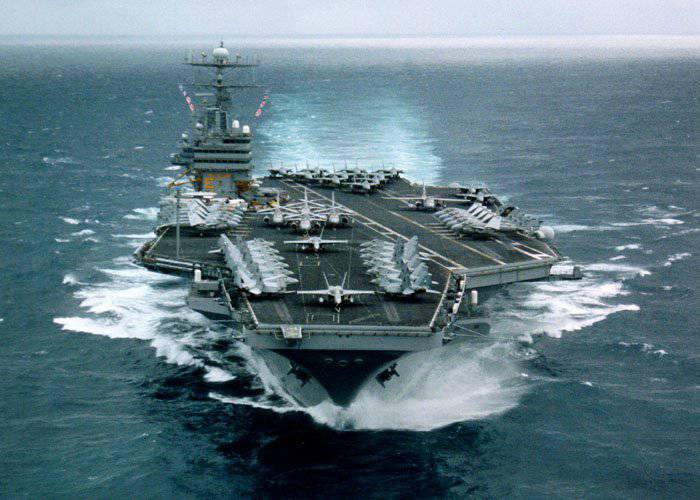 The officer bent over the mortally wounded Nelson, and at that moment a faint moan of “Kiss me” (kiss me) fell from the lips of the dying admiral. Vice Admiral Hardy was surprised and twice kissed Nelson. Historians are still arguing about the significance of this episode; according to one of the versions, the dying Nelson most likely pronounced “Kismet” (providence, rock).

The combat survivability of ships is quite a complex and controversial topic. Sea история full of amazing examples of the imminent death of ships that seemed unsinkable before, and, at the same time, equally incredible cases of salvation in hopeless situations. At first glance, the absence of any clear laws defining the survivability of ships suggests that the outcome of each exit to the sea depends solely on an accidental combination of circumstances.

The unsinkable ship during its first flight ran into an iceberg and turned into a legend. Perhaps this is due to the fact that when the Titanic was launched into the water, they forgot to break the bottle - and, as you know, a ship that did not try wine will definitely want blood.
Sistership "Titanic" - "Olympic" was launched on all the rules: the bottle broke on its board and the liner 25 years honestly worked on the transatlantic lines, receiving the nickname "Old Reliable." 24 on April 1918 of the year “Olympic” spotted the German U-103 submarine and, without thinking, went to ram. The liner with a full displacement of 50 000 tons ripped in half 800-ton Sambarina. Just like an iceberg ...

A completely fierce, paranormal story occurred on November 11, 1942, near the Cocos Islands. A small convoy from the Dutch tanker Ondin and the British minesweeper Bengal was intercepted by two Japanese auxiliary cruisers. The displacement of opponents differed 50 times. Sixteen 140 mm guns and 8 torpedo tubes Hokoku-Maru and Aikoku Maru against the only 76 mm minesweeper guns and one 102 mm tanker 32 ammunition. The speed of the tanker "Ondina" - 12 knots, the front speed of the minesweeper "Bengal" - 15 knots. The speed of the Japanese Raiders - 21 node.

One of the Japanese auxiliary cruisers was destroyed, the second one was damaged, and not a single member of the Bengal team was scratched. The convoy arrived at its destination without delay. Both ships survived the Second World War: the tanker Ondina was decommissioned in 1959, the minesweeper Bengal served until 1960.
No one can blame Japanese sailors for incompetence or cowardice. Such is fate, providence, irresistible rock. By the way, I had a feeling of déjà vu ... Exactly! Brig "Mercury" and two Turkish battleships.

If the reader has a feeling of hopelessness and doubt in his abilities to change anything, then it is absolutely in vain. The result of each sea battle is a combination of numerous factors and indicators. The invisible hand of providence only determines the order in which the ship’s vulnerabilities and the flight paths of enemy shells are combined (and here the unbroken bottle of champagne and the 13 number are probably crucial ... although it may be all about preparing enemy gunners?). And yet, considering each indicator separately (booking, type of GEM, stability), we conclude that the better the value of each of them, the higher the likelihood that the ship will emerge victorious.

Indeed, despite the enormous influence of chance, there are well-defined rules. For example, if the ship is well-tailored, then it is likely to be reliable and tenacious. There are a whole series of successful designs, for example, destroyers of the Novik type. 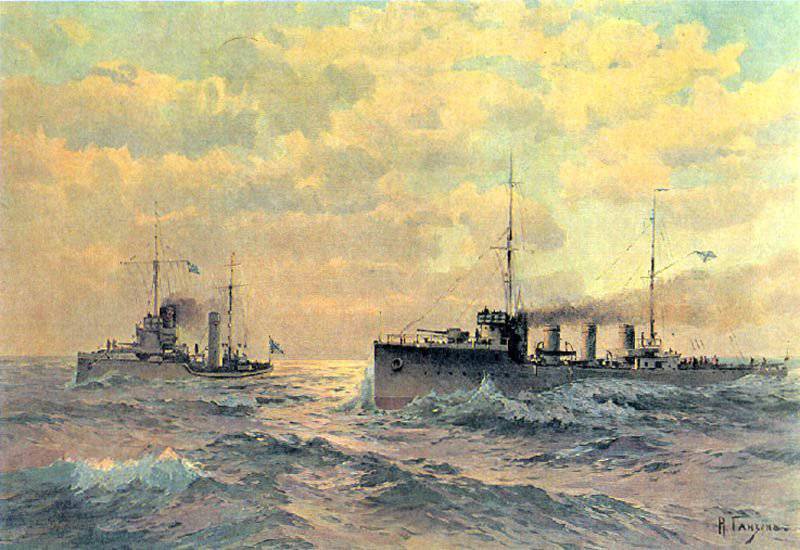 Noviki
In 1942, in the Barents Sea, eight-meter waves tore off the smash destroyer Smashing (the destroyers of the 7 project, like their progenitor, the Italian destroyer Maestral, differed in the unimportant hull strength). The destroyers “Kuibyshev” and “Uritsky” (former destroyers of the type “Novik” - “Zabiyaka” and “Captain Kern”) urgently came to the aid of the emergency ship. Despite its solid age, Noviki kept on the wave perfectly and nothing fell off in their 11-point storm.

No less reliable was the Fletcher-type American destroyer hull, assembled from 18 mm steel sheets - kamikaze aircraft often punched through destroyers, but the Fletcher hull, despite the extensive destruction of power set, retained longitudinal strength.
Another great example is the Soviet destroyers of the 56 project. On these ships, over the 30 years of active exploitation, not a single major accident has occurred with human victims - given the realities of our Fatherland, it’s just a phenomenal result.

It has long been known that any weapon - only a pile of metal without trained personnel. The human factor is key in every situation. For example, in the 1944 year, the submarine USS Archer-Fish sank the Shinano, the largest aircraft carrier of the Second World War, with a total displacement of 70 000 tons by four torpedoes. It's only been 17 hours, after he went on his first battle trip! Surprise is caused by the fact that after the torpedo attack, the Shinano retained the course, the damage turned out to be insignificant, but ... after 7 hours, the supercarrier rolled over and sank. Well, what did you want from the crew, who was not familiar with the plan of the interior of a huge ship? The Shinano team was formed two days before going out to sea — the sailors simply did not know how and what compartments needed to be flooded in order to level the list. The situation was aggravated by the fact that the watertight bulkheads were not sealed, because Shinano was unfinished!

The opposite example is the death of the shock aircraft carrier "Yorktown", which lost its combat capability after hitting two torpedoes and a 250 kg bomb. But the aircraft carrier was not going to die - emergency parties extinguished fires, prevented the inflow of seawater and tried to reduce the list. The next day, going in tow, "Yorktown" once again came under attack - it got two torpedoes from a Japanese submarine. The aircraft carrier stayed afloat for another day.
The Yorktown, like the Shinano, killed four torpedoes. What is the difference you ask. Yorktown was 3 times smaller than a Japanese supercarrier!

Of course, the technical condition of the ship is of great importance - there is no doubt that on the ship that went into the sea, which stood for 20 years of conservation or propping up the mooring wall with limited funding, various surprises are possible, such as a sudden flooding of part of the compartments or loss of progress in the middle of the ocean. To send such a ship into battle means to betray the crew (which was once again proved by the unprepared Shinano). 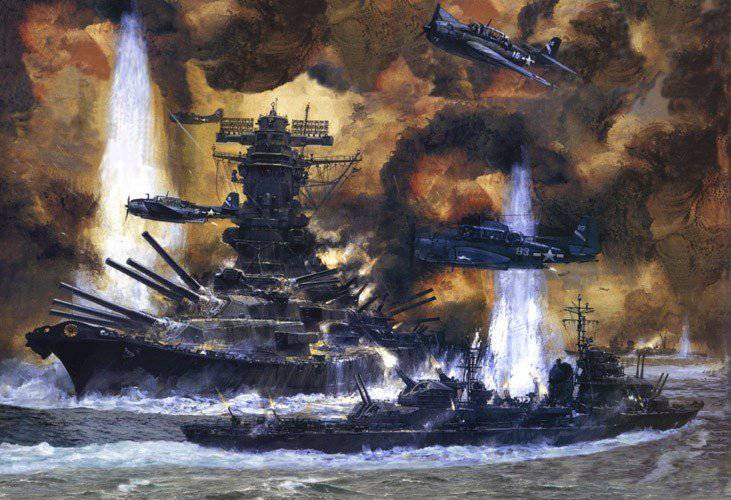 Drowning "Yamato". That's how it was.
There is another specific factor - if the enemy has a deck aviationHe is guaranteed to win any naval battle. The Yamato superlinkor turned into a laughing stock: despite 180 anti-aircraft artillery barrels and a half-meter battleship armor, the fragile and awkward torpedo bombers the Avenger drowned him in 2 hours, along with his entire escort from the cruiser and six destroyers. Killed 3600 Japanese sailors. Losses of Americans amounted to 10 aircraft and 12 pilots.
Sistership "Yamato" - Musashi superlinker was much more successful. he resisted as much as 4 hours and managed to shoot down entire 18 American carrier-based aircraft. The loss of the Japanese this time amounted to 1023 sailor. 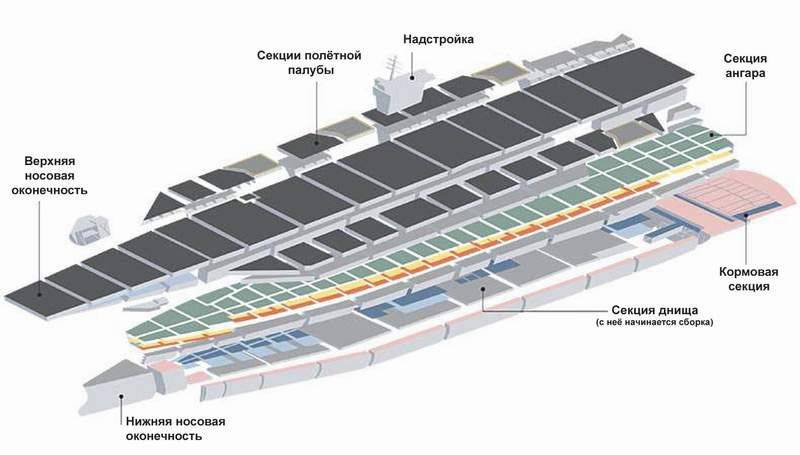 Of course, the survivability of the aircraft carrier is very high, which is ensured, first of all, the enormous size of the ship. The length of the "Nimitz" - 332 meter, it does not fit in Red Square.
Nimitz is assembled from 161 into a finished section weighing from 100 to 865 tons. The floating aerodrome hull is divided by 7 decks and watertight bulkheads into more than 200 compartments. The flight, hangar and third deck are made of armor steel with thickness 150-200 mm.

There is an erroneous opinion that a floating airfield is an extremely flammable object filled to capacity with aviation kerosene and ammunition. Misconception based on the fact that fuel reserves are considered without taking into account the size of the ship. Indeed, the supply of jet fuel on board is huge - 8500 tons. But ... this is just 8% of the total displacement of the aircraft carrier! For comparison, you can bring data on other types of ships:

1. A large anti-submarine ship, pr. 1134-A ("Kronstadt"). Full displacement - 7500 tons, ship stocks: 1952 tons of fuel oil F-5; 45 tons of diesel fuel DS; 13000 liters of aviation kerosene for a helicopter. The fuel reserve was 27% of the ship’s total displacement.
Perhaps someone will note the difference between kerosene and fuel oil, but the well-known trick with extinguishing a torch in a bucket with heavy oil fractions is not entirely correct. In battle, the cistern is not set on fire with a torch, it is beaten on it with a hot pig with supersonic speed, with all the ensuing consequences. 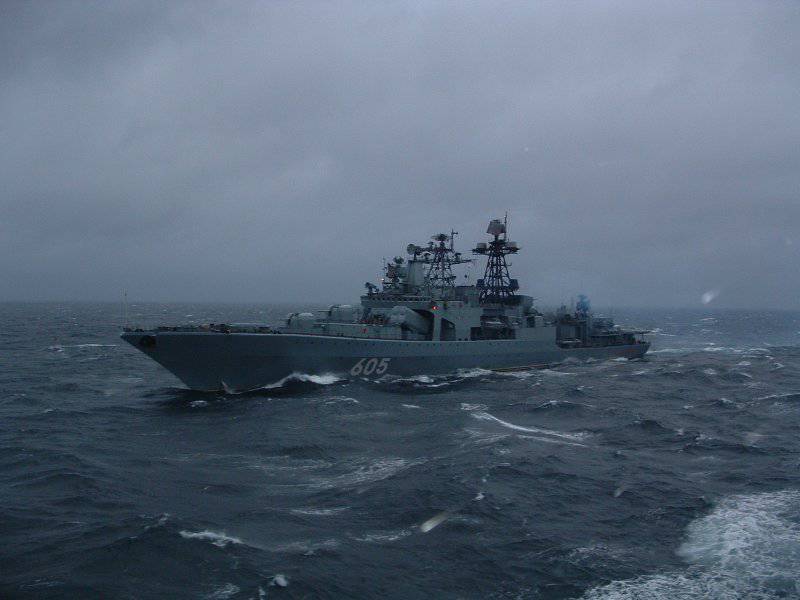 BOD "Admiral Levchenko" pr.NUMX - one of the most beautiful ships in the world
Moreover, on an aircraft carrier, unprecedented measures are being taken to store jet fuel - tanks located on the lower decks are covered with armor and surrounded by hermetic cofferdams (narrow uninhabited compartments) in which an inert gas is pumped. The fuel, as used, is replaced by seawater.

Regarding the amount of ammunition on board the Nimitz type aircraft carrier, many sources call the figure 1954 tons, i.e. less than 2% of the giant ship's displacement - not at all impressive. For security reasons, the ammunition cellars are located below the aircraft carrier's waterline - if there is a danger of an explosion, they can be urgently flooded. Most modern ships are deprived of such an opportunity - the ships of the NATO countries are equipped with Mark-41 UVP, in which the ammunition is above / at the waterline level. On most Russian ships, the situation is similar - most of the armament is generally moved to the upper deck. 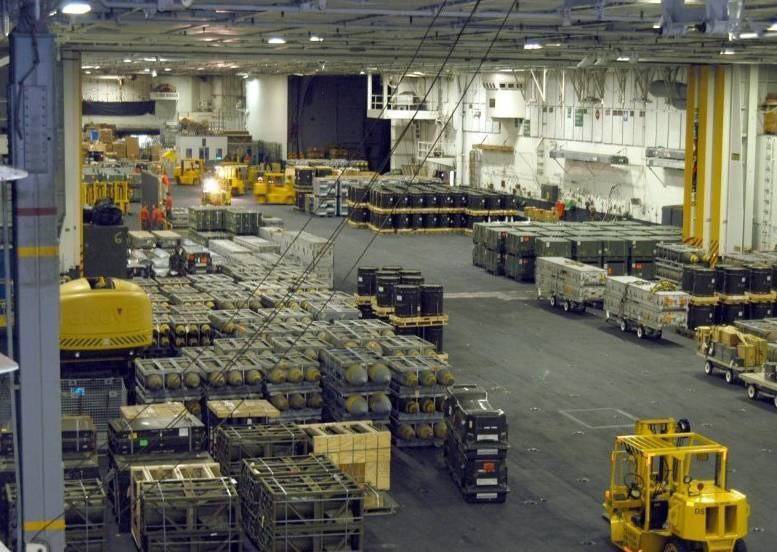 Exclusive photo. Cellar ammunition "Nimitz"
The main power plant of the Nimitz type aircraft carrier is layered and housed in four watertight compartments. The nasal compartments of each echelon are set aside for a nuclear steam generating plant, and the stern compartments are for the main turbo gear units. From the bottom, the aircraft carrier is protected by an unsinkable armored deck, and the onboard anti-torpedo protection covers areas of the reactor compartments, ammunition cellars, and aviation fuel stores and reaches the height of the third deck.

Considering all the above, it follows that the guaranteed destruction of an aircraft carrier is possible only in the case of the use of high-power nuclear munitions. That, in turn, is practically unrealistic during local conflicts. 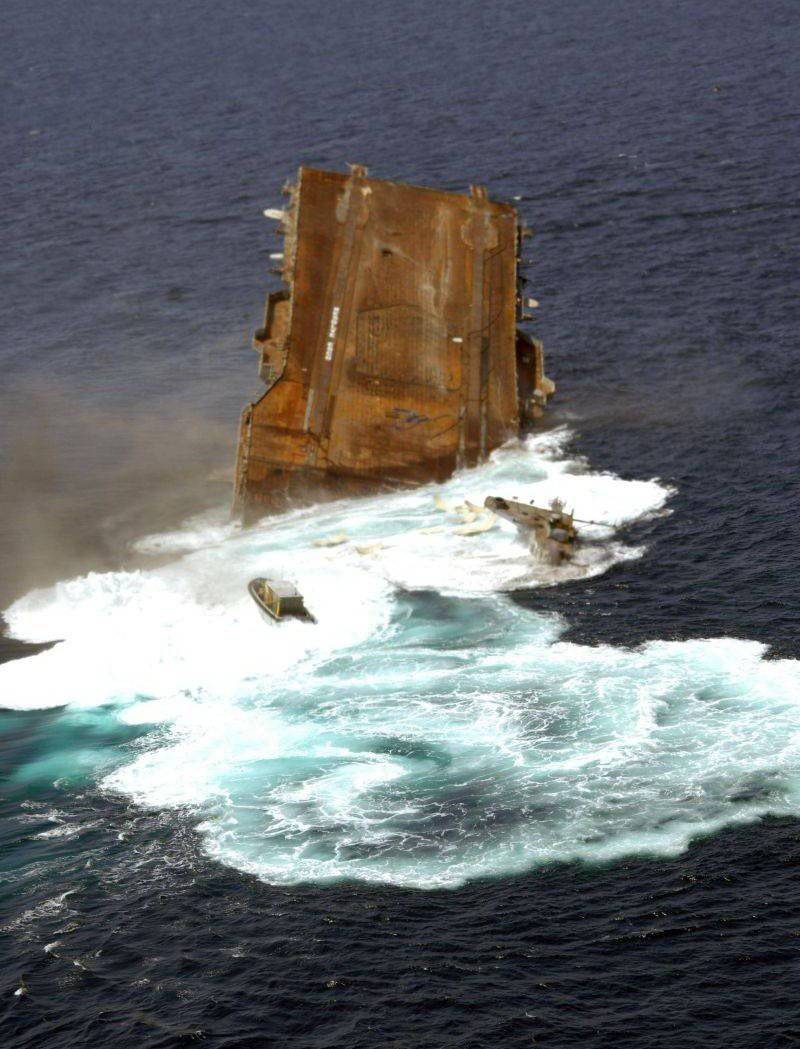