Once again about double standards of the West 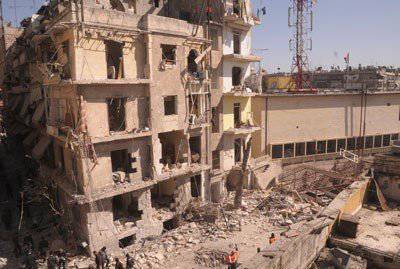 When the West refused to condemn the terrorist attack in the Damascus National Security building, which resulted in the death of the Syrian defense minister and other security officials, this was somehow understandable. After all, people who opposed Western plans for the colonization of Syria died. And so the attack was deemed "good", and the United States publicly praised him.

When the West refused to recognize an explosion directed at UN observers, committed by Syrian terrorists near a hotel in Damascus, where observers were based, this, of course, was harder to understand. But, in the end, in that explosion, by luck, no one died, only the wounded were.

But when the West refuses to recognize the terrible explosion in Aleppo, which took place on September 9, which killed dozens of people (according to the latest data, already 50), including many children, and a lot of wounded - what framework does it fit? The dead are innocent civilians. The school and two hospitals suffered from this explosion. So is it possible to shield the people who committed it?

It turns out, you can.

And when Russia raised the question of recognizing a terrorist act as a terrorist act to the UN Security Council meeting, the United States and other Western countries ... simply refused to do so.

In this regard, the Syrian Ministry of Foreign Affairs expressed extreme indignation. In a statement, the Foreign Ministry said that "Western countries that did not agree to accept the declaration followed a policy of double standards. They support the terrorist groups operating in Syria and strongly encourage the continuation of bloodshed in the country."

The statement of the Ministry of Foreign Affairs also expresses great gratitude to Russia and to all those states that have condemned the terrible terrorist attack in Aleppo.

As for Syria itself, it has always condemned the terrorist attacks that took place in other countries, including those that today are not able to squeeze out a single sound of elementary human sympathy. Syrian President Bashar Assad has repeatedly personally expressed his condolences to the relatives of the dead civilians, despite what relations Syria had with this country, which committed the attack.

The West, it turns out, justifies terrorism directed against unwanted countries. And the people dying in such terrorist acts are for the West "wrong people" who must die and who should not even be pitied.

Is this not a violation of all norms, all laws against terrorism?

By such an inhuman stance, the West only encourages terrorists to commit more and more crimes against the Syrian people.
Double standards of the West appear in other episodes. How many attacks on Syrian diplomatic missions over the past year! It was in different countries of the world - both in the Arab world and in the West. The atrocities of the so-called "oppositionists" in the Syrian embassy in Jordan were very cruel. Then the staff of the Syrian embassy were brutally beaten, the consul broke his arm. The United States cheered cheerfully - that’s supposedly true democracy, how we see it ...

But now in the Libyan city of Benghazi, a violent crime has also occurred, which has now hit the United States itself. This time, four American diplomats were killed by an angry mob. Mrs. Hillary Clinton was perplexed: "We brought them freedom, and they did this!"
Only now this “freedom” was brought not by any means, but with the help of “Tomahawks”, bombs and cruise missiles. And they supported the very forces - the radical Islamists - who have now committed this brutal crime. After all, American diplomats were not simply killed, they were sadisticly mocked at them before their death, just as cruel as in their time at the legitimate leader of Libya, Muammar Gaddafi.

Sadists do not have faces and souls, they don’t care about whom to mock. What they demonstrated in Benghazi. But all sober-minded people then warned the United States and Western countries that they should not support these forces, no matter how tempting it was to break a country whose only fault was only in choosing its own development path. You associate with the devil - and take your soul. And so it happened.

By the way, the rebellion in Libya itself began with the fact that its legitimate government defended the Italian embassy from a similar fate, which the same forces began then, in February 2011, to smash. The police had to use force, several people were detained, and with the demands to release them, riots broke out in Benghazi, which turned into a real war, NATO bombardment, which ended with the fall of the Libyan Jamahiriya ...
Now there is no legitimate authority in Libya, and therefore such atrocities are possible, the taste of the blood of which the United States felt on its lips ...

Syrian scumbags, supported by the United States and its allies, are no better. Think again, gentlemen Americans! Let at least the death of your four citizens not be in vain and force you to reconsider your position on the justification of terrorism. After all, you once again support the devil!