New - old: from the crooked Hamilton pistol to the KRISS-VECTOR 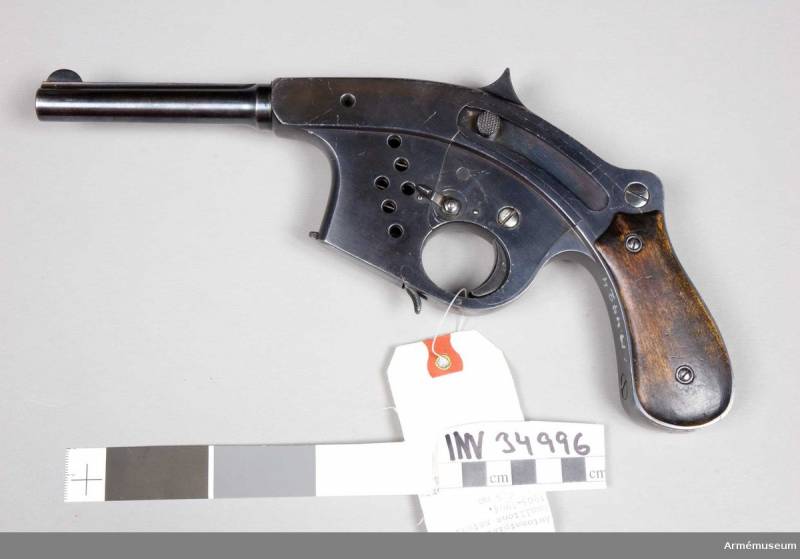 Hamilton pistol with "curved breech". Left view. The lever above the trigger guard is a safety catch. Army Museum, Stockholm

What has been will be;
and what has been done will be done,
and there is nothing new under the sun.
Ecclesiastes 1: 9
History firearms weapons. Let's digress for a while from Luger-type pistols, and look at some of the original samples of pistols that appeared, were tested, but, as they say, did not come to the court, or, rather, did not have to go anywhere at all.

However ... is it worth saying that they disappeared, leaving no memory behind?

No, of course, in the history of firearms there are, or rather - there were, many interesting projects that differed from others either in their unusual technical solutions or extravagant appearance. And at first they were looked at as "one of", then - as a technical curiosity, and only many years later - they used their own technical solutions at a different level. A similar story, for example, took place with regard to the "crooked pistol" by Gustav Hamilton. 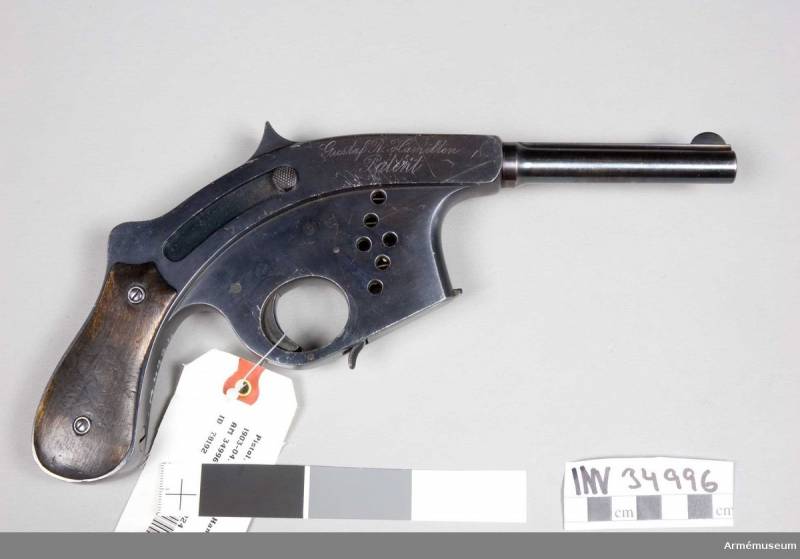 The same pistol, right side view. On the surface of the magazine, holes are visible to control the presence of cartridges through which the feeder spring is visible
And it so happened that when the creation of automatic pistols was in full swing in the world, a certain Swedish Count Gustav Hamilton applied for a patent for a very unusual pistol design on December 11, 1900. Actually, outwardly, he did not particularly stand out among others: a store with a batch loading in front of the trigger guard made him look like many models of the then automatic pistols.

The curved shutter made it unusual. 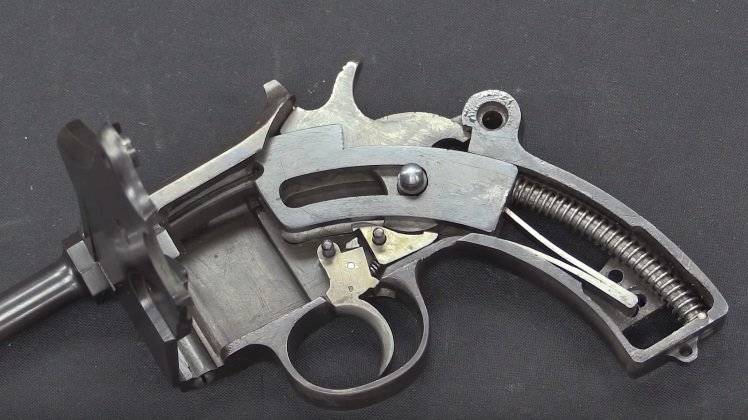 Bernard Müller's pistol. The magazine lid is open. It is clearly seen that the pistol had a separate trigger, but also a protrusion on the bolt, with which it was retracted. In this regard, Hamilton's pistol is simpler and more perfect. His trigger was hidden and was under the bolt. Rockyland Auction Photos
Again, even he was not the first on this path.

The first was the Swiss gunsmith Bernard Müller of Zurich, who in 1895 received a patent for a semi-automatic pistol most like a revolver ... without a drum. It had a caliber of 7,63 mm and a barrel length of 107 mm. It was charged from above, using a clip. Outwardly, both pistols of both Muller and Hamilton are similar, but apparently their design was still not so similar that Hamilton did not receive a patent. 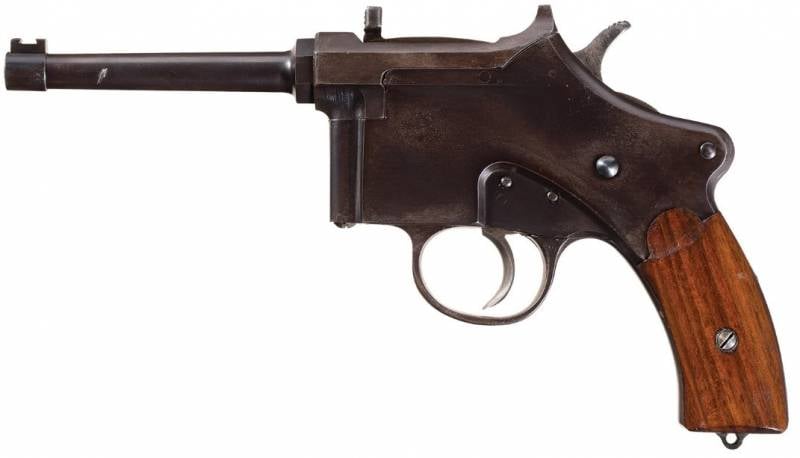 Bernard Müller pistol assembled. Rockyland Auction Photos
Interestingly, the first Hamilton pistols were assembled at the Torssen and Son sewing machine factory, but they were made in few, no more than ten units.

But this amount was enough both to shoot them, and in 1903 to apply for a pistol competition for the army. I must say that his pistol had to compete with very perfect samples. For example, two Browning were presented at the competition - the M1900 and the M1903, the Colt M1900, which the same Browning created, as well as the Luger, Frommer, Mannlicher pistols and even the 1895 Nagant revolver.

The pistol submitted by Hamilton to the competition was slightly improved. Now it was loaded with a seven-round magazine, but otherwise it retained all its features.

The competition showed that Hamilton's pistol had no advantages over other pistols, and the Browning M1903 became the winner.

Nevertheless, from a technical point of view, this pistol was very, very interesting. So, its curved bolt along the arc sector by the recoil force did not go straight back, but along an arc inside the frame with the corresponding profile, and rested against the spring inside the handle. 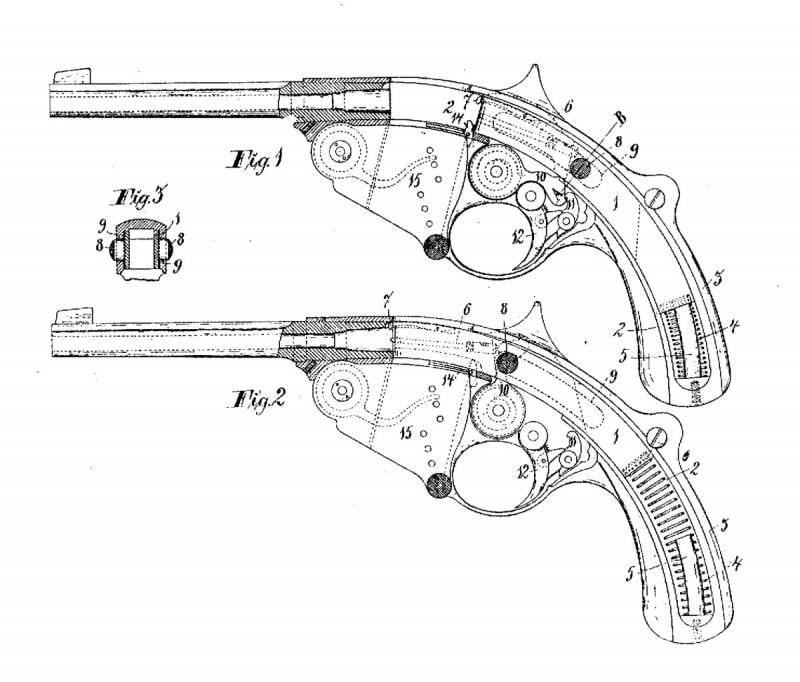 Hamilton pistol diagram from a 1900 patent.
A feature of the very first sample of Hamilton's pistol were two clock springs. The trigger spring under the bolt and the cartridge feeder spring in the store. The breech spring in the handle was flat. The striker was in the bolt. The bolt was retracted back by two corrugated washers protruding in the slots of the frame, and at the same time the trigger was set on a combat platoon.

The protrusion, which in the photo is visible above one such washer, served for aiming. It had a cutout for the front sight on the barrel. That is, on the one hand, the pistol was simple and perfect enough for those years. In any case, it is much simpler than the same Luger or Colt. But ... he had a significant weight: 1,2 kg, length - 270 mm, but he shot a bullet weighing only 4,1 grams, the speed of which at a distance of 10 m from the muzzle was 228 m / s and was clearly compared to other competitors insufficient.

Why didn't the creator of the pistol increase its power by using a stronger cartridge and a larger caliber?

Did the design really not allow it?

And then, how was this pistol doing with accuracy? After all, the recoil from him went into the handle and, in theory, toss the barrel up in the same way as it was thrown by others, the pistol seems to be not supposed to?

However, alas, there are no answers to all these questions.

But many years later, patents of S. N. Pavlov and A. G. Semenov for revolvers with ... curved barrels appeared in our country.

Moreover, this is not at all what people usually think when they hear about "curved" weapons. This was created, in particular, during the Second World War, and even earlier, too, for shooting from tank on the subject of self-defense from infantry and "shooting from around the corner." 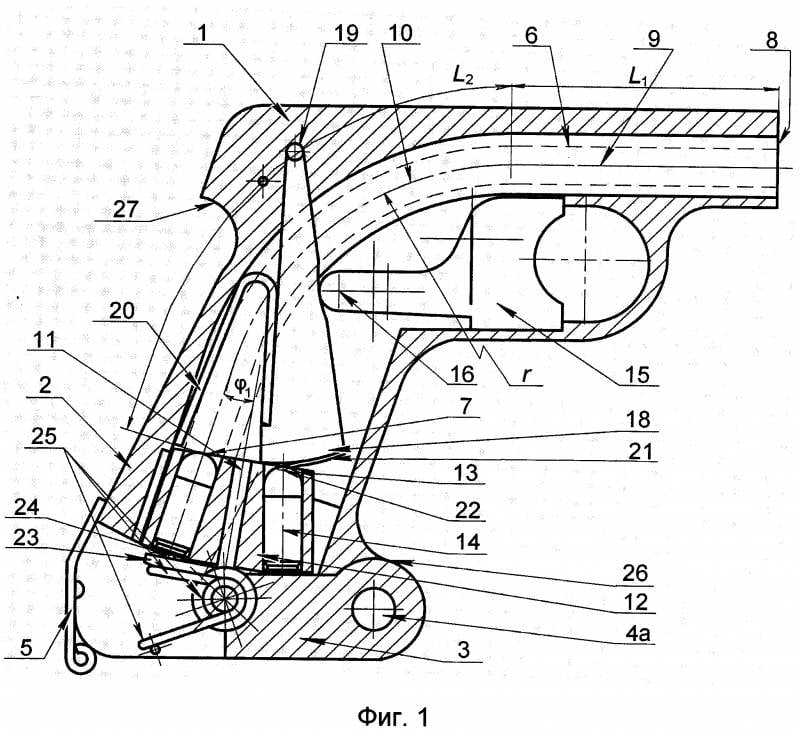 Diagram of a revolver by S. N. Pavlov and A. G. Semenov with a tapered magazine in the handle and a curved barrel
In this case, the barrel is curved in the longitudinal vertical plane and is located inside the revolver.

In a traditional curved weapon, the bullet is accelerated inside the straight barrel and only then hits the “curved nozzle”. Here the barrel itself is "crooked", and the bullet flies out of its straight part. The drum is made conical, while the axes of the drum chamber are inclined to the axis of rotation of the drum and are located in the lower part of the handle.

The authors published their article devoted to their development of such unconventional pistols in the magazine "Kalashnikov, weapons, ammunition, equipment" No. 6 for 2007. 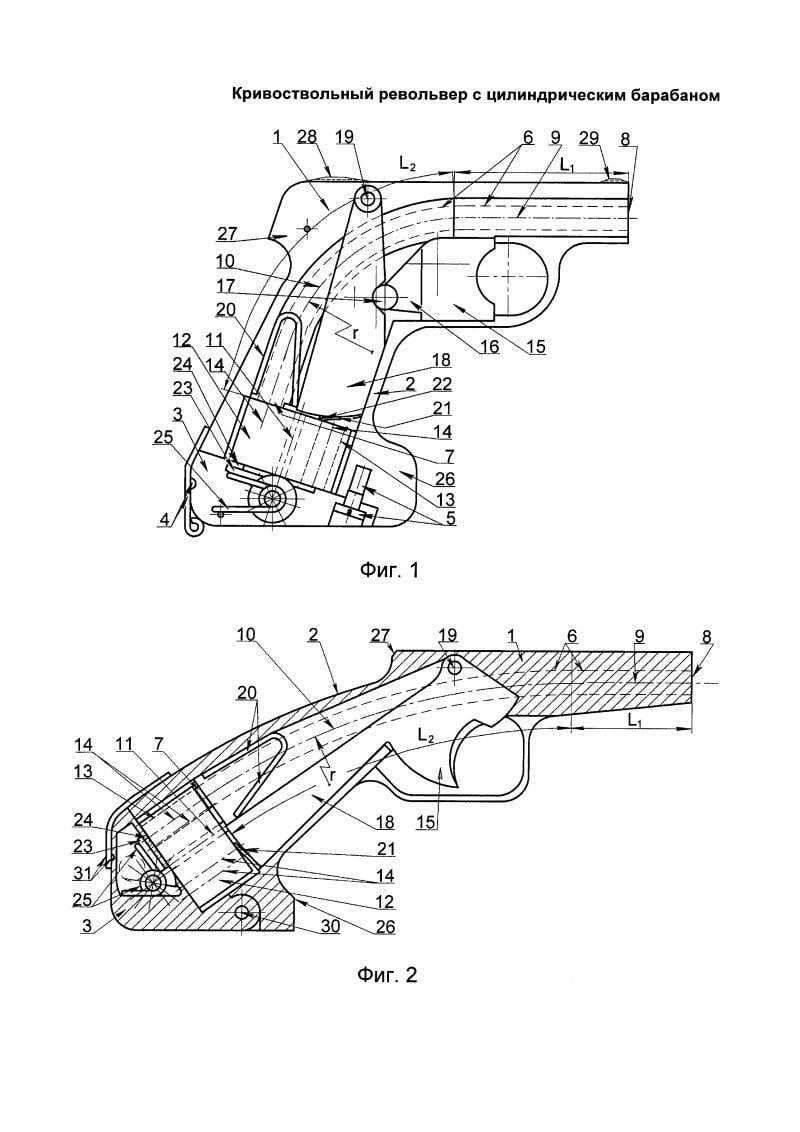 Revolvers S. N. Pavlov and A. G. Semenov with cylindrical drums
And the main idea of ​​such a curved revolver is precisely the redistribution of recoil forces, the energy of which is directed not backward, but downward, into the handle. In addition, the barrel itself of such a revolver acquires a considerable length, although the dimensions of the Pavlov and Semenov revolver themselves are relatively small. That is, its trunk is both long and ... short - that is, everything is according to TRIZ. 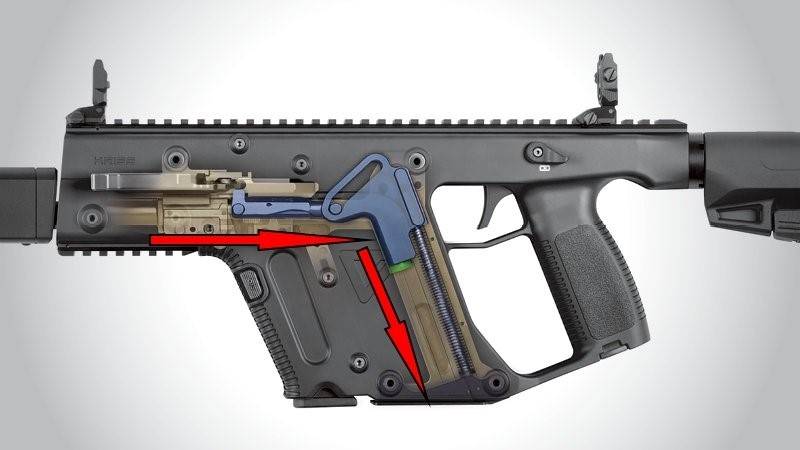 But the main thing is that, even though it shoots powerful .45 ACP cartridges (although there are modifications for other cartridges), the bullets of which have a very large stopping effect, its mass and dimensions are relatively small. But the most interesting thing is that when firing a burst from this submachine gun, the barrel toss is very insignificant, that is, the features of its design significantly increase the accuracy of automatic fire, which gunsmiths from all countries of the world have long been trying to achieve.

The author of this more than super-original design, using a semi-breech shutter with a shifted recoil momentum, was Renault Kirbra.
Today there are two main variants of this unusual submachine gun: the "combat" - Vector SMG, which is intended for use in law enforcement agencies and for the military - with a short barrel only 140 mm long, and the civilian Vector CRB / SO, the barrel of which (according to the law USA on civilian weapons) is made with a length of 406 mm. For greater aesthetics, a muffler simulator is worn over it.

The second difference from military and police models is the impossibility of firing in automatic mode. That is, all civilian models are semiautomatic devices. Although for those states where this is allowed by law, a civilian version of the Vector SBR / SO is also produced, which has a short barrel.

And it is natural that today the Vector submachine guns are produced for different tastes, at any price, in a wide variety of configurations and even ... in different colors.

This model has a more complex stock, and the color is the most sandy ... Photo by KRISS USA

Well, this KVG2 SMG FX is clearly intended for people with peculiar inclinations ... although there is also a bright red version! Photo by KRISS USA 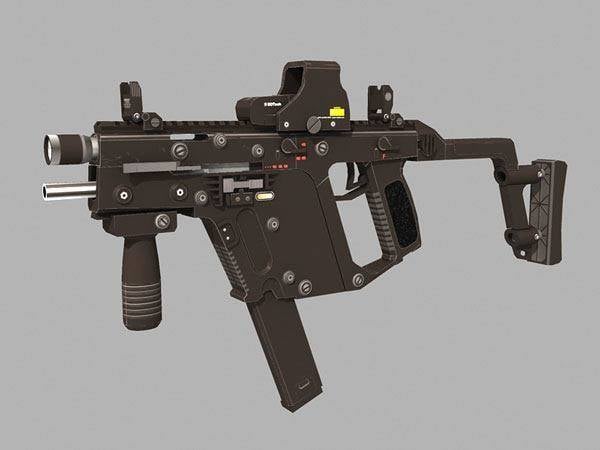 No one will say that this submachine gun is made of ... paper, but nevertheless it is so. Photo Paper-models.ru - free paper models and modeling magazines of any complexity ...
The KRISS Vector 22 CRB is a dedicated civilian semi-automatic sporting rifle that fires rimfire cartridges and combines the iconic aesthetics and ergonomics of the KRISS Vector carbine with a modern modular design.

The Vector 22 is a one-of-a-kind firearm designed for use with .22LR cartridges for competition, training and small game hunting. The bolt of these rifles moves in a straight line. With such a small caliber, the complication of the kinematic scheme of the shutter was clearly useless.