19 September 2012
87
The Turkish-Kurdish conflict has lasted for more than a quarter of a century. Serious armed clashes between the Turkish army and the fighters of the Kurdistan Workers' Party, formed by 27 in November 1978, began in 1984 and continue to this day with different strengths.

The Kurdish Workers' Party is waging war to establish its own state, and the Turkish government is fighting to preserve the territorial integrity of its state. By the beginning of the XXI century, the Kurds are the most numerous people who do not have their own statehood. 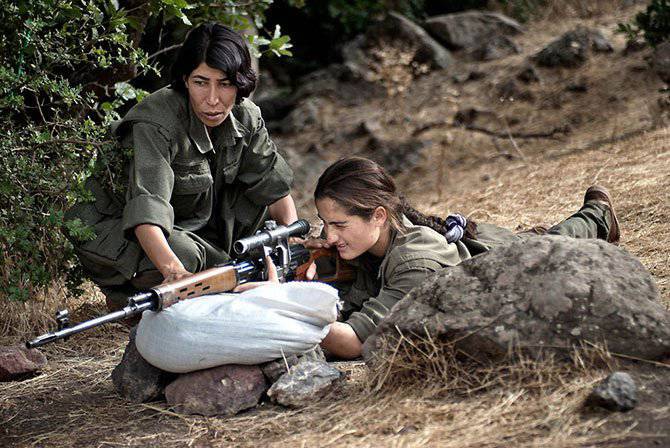 For all 30 years of war, armed clashes subside, then flare up with a new force. Beginning in the 1993 year, unilateral armistice was declared in the 5 war. Kurdistan Workers Party willingly accepts women in the ranks of the rebels. So in the 1990-s almost 30% of all its fighters were women. In the traditional culture of the Kurds, a woman is powerless and depends entirely on the man. But in the army, all this does not matter. All fighters, both men and women, undergo the same instruction, train together and eat together.

We offer a look at the photographs of Colin Delfosse’s “Amazon PKK” project (“Les Amazones du PKK”). The pictures were taken at the military base of Kurdish women in Iraq. 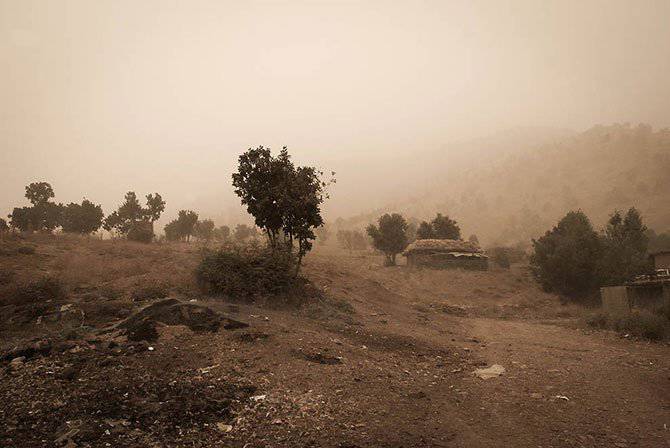 The road to the camp. The Kurdish population makes up the majority within Kurdistan - an ethnographic region located in Turkey, Iran, Iraq and Syria. In the mountains of the Iraqi region of Kurdistan are the rear bases of women from the Kurdish Workers Party. 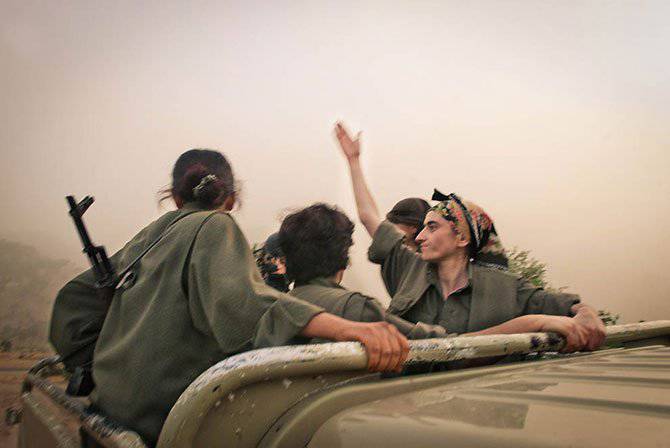 Rebel women. The rebel base is located near the capital of Iraqi Kurdistan, Erbil, one of the most ancient cities in the world. Getting to the base first on an SUV, and then have to walk a long time along the mountain paths. 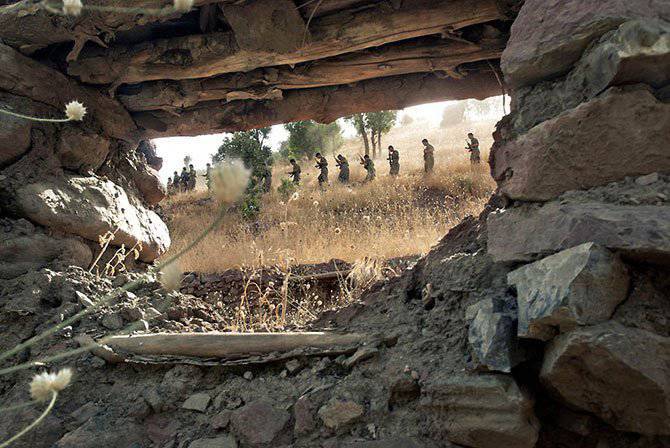 On this base, female fighters belonging to various sectors of society and having citizenship from different countries undergo military and ideological training. All fighters live in truly Spartan conditions. 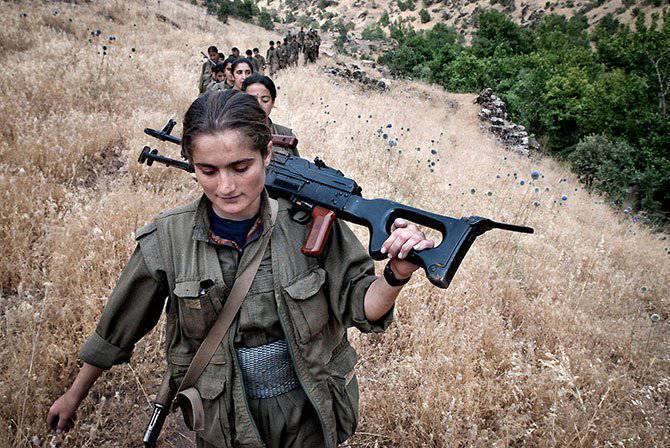 Women go to the military base, like to work. Each female fighter must undergo semi-annual training. In this case, women's loads are no different from men's. It is strictly forbidden for women to enter into close relationships with male fighters. In accordance with the party principles of the Kurdistan Workers' Party, society should grant women the same rights as men. One of the consequences of such equality is the observance of army discipline without any concessions and hard soldier's work on an equal basis with men. 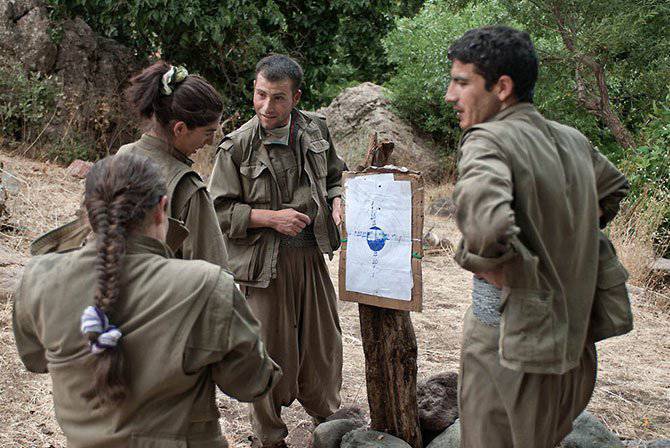 Female fighters must learn to own a gunshot weapons. After completing a full course of instruction, some women remain in the army and take part in hostilities, some go “to the reserve”. 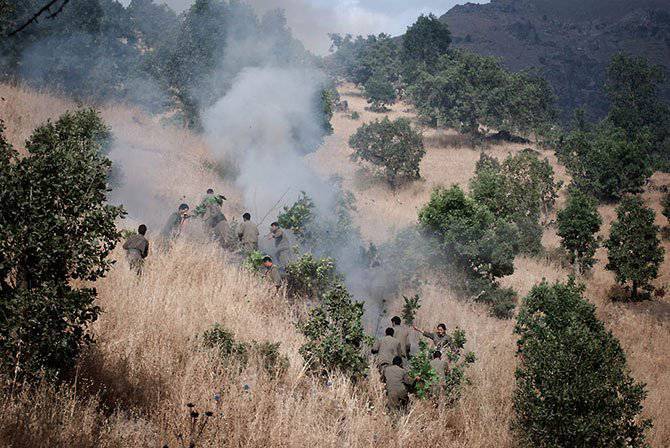 One of the bullets set fire to the dry grass. Those who are at the base, try to extinguish the fire as soon as possible, until they found the base. 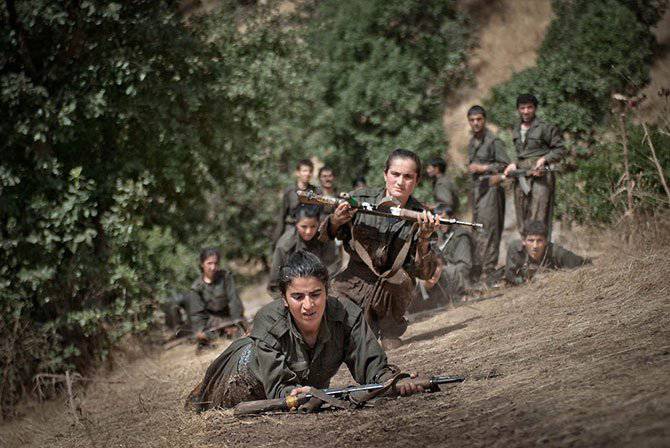 In traditional Kurdish society, women are assigned a subordinate role. But at the military base, the course of physical training is the same for men and for women. 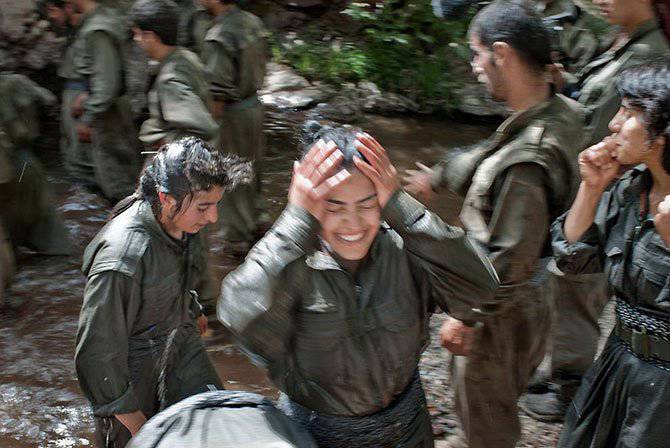 Cadets wash at the mountain stream. 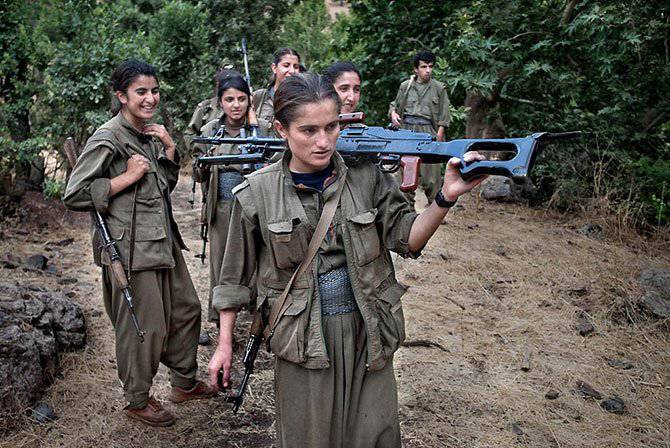 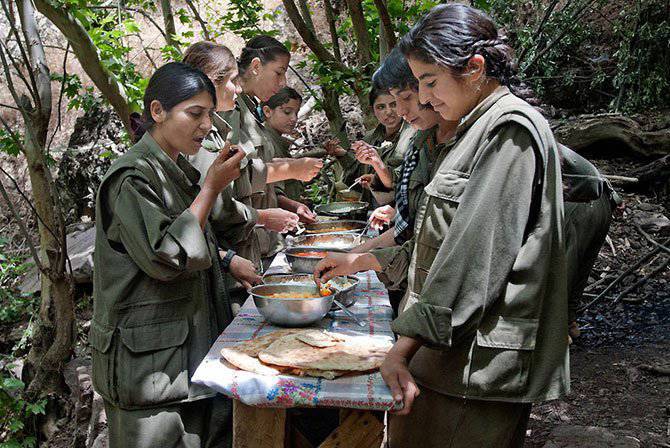 Cadets should eat standing up, like soldiers during real fighting. With such an organization, you can quickly repel a surprise attack of the enemy. The cadet carries his ration on himself, and the food supply is strictly rationed. The cadet menu includes bread, beans, traditional feta cheese and olives. 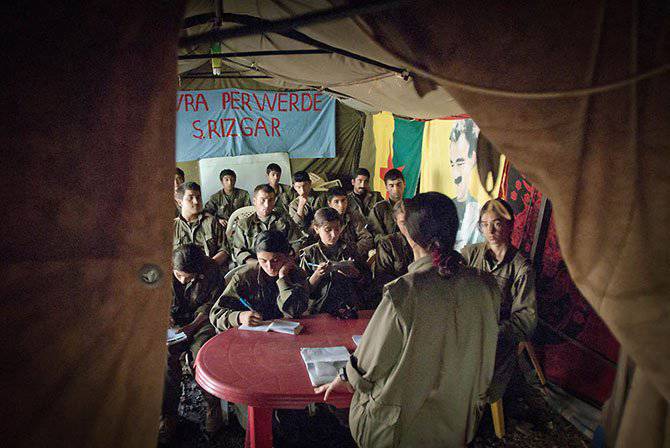 In the afternoon theoretical lessons begin. The humanities program that students must master is quite extensive. The fundamentals of the PKK ideology, philosophy and literature descend into it. 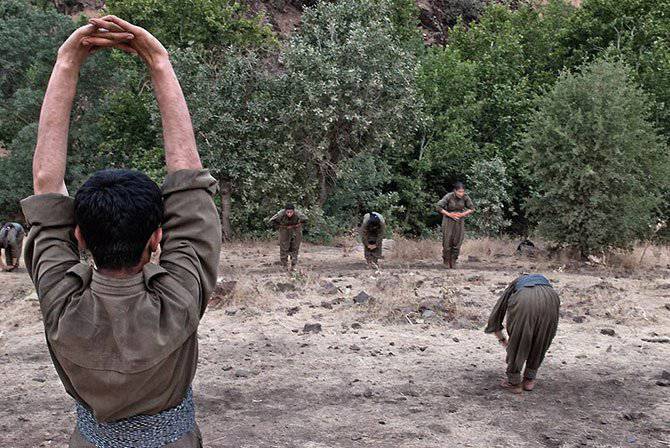 Morning exercises at five in the morning. 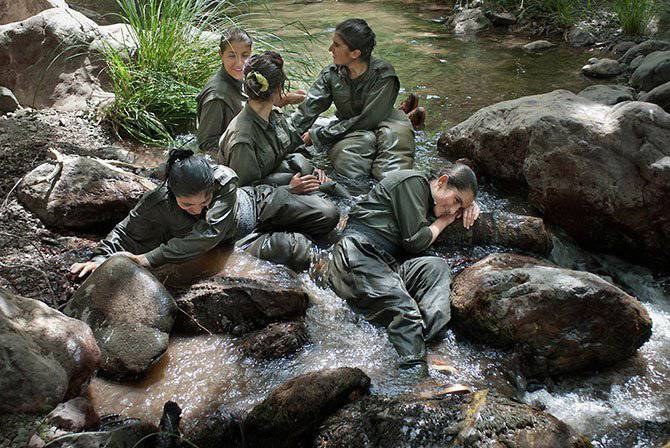 Female students are hiding from a Turkish drone. 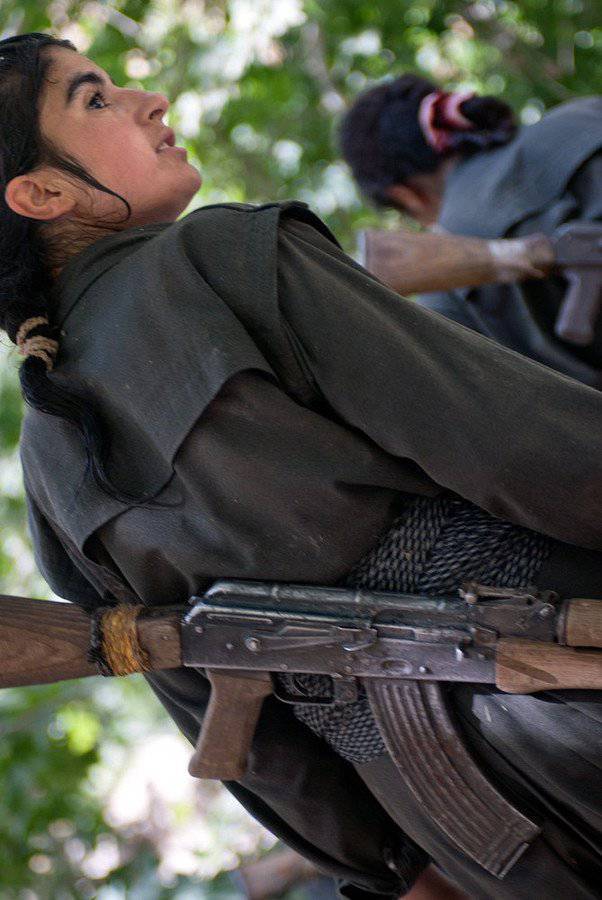 If the drone notice fighters, then bombers will arrive at this place in a few hours. 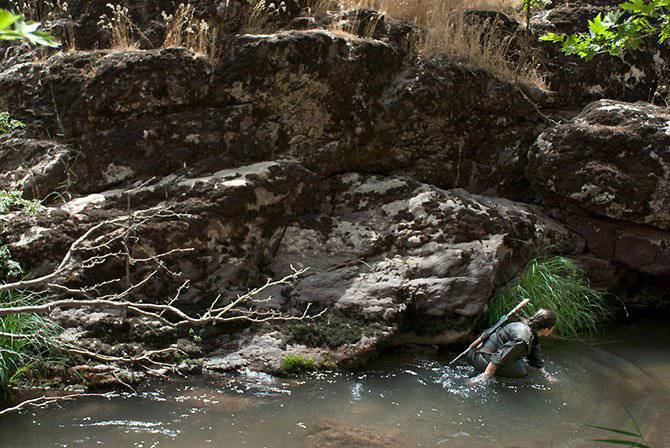 Even when the drone has already flown away, the cadets continue to move with great care, hiding in the ravines. 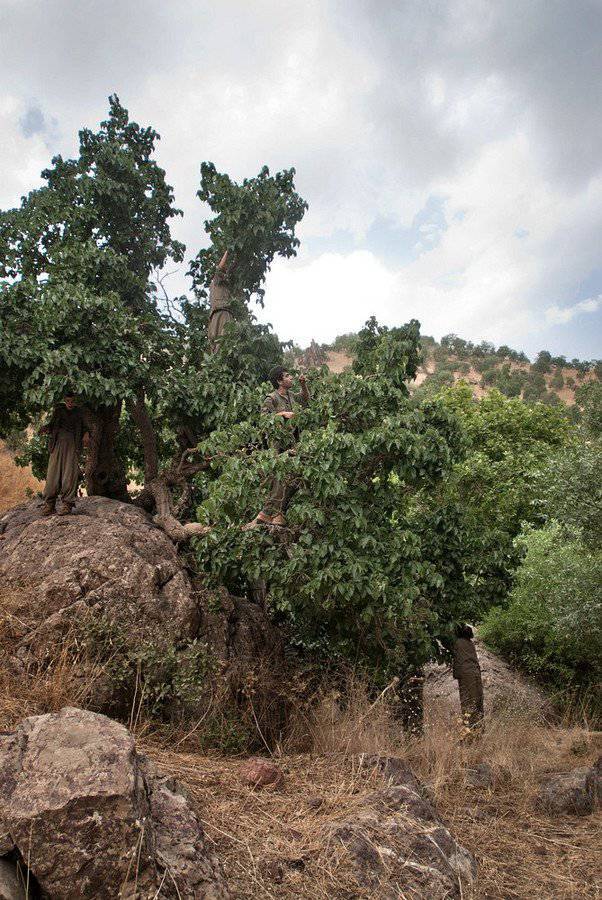 The female students allowed themselves to climb a tree to pick fruit. 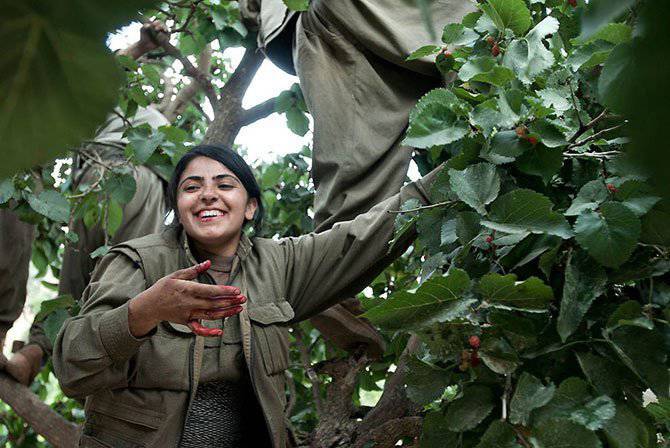 Right on the tree you can eat mulberry. 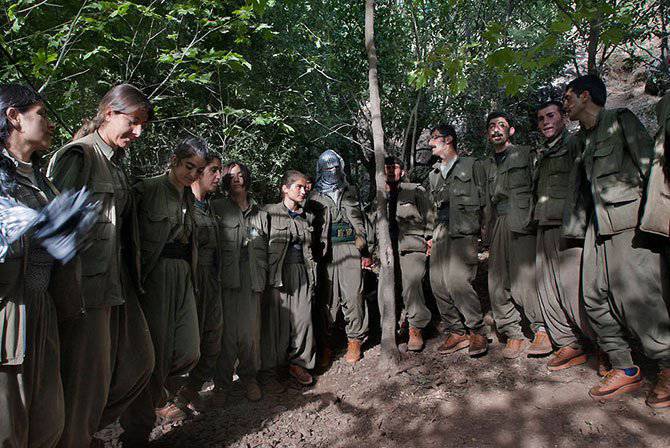 At the end of the day, the "cultural program" begins. 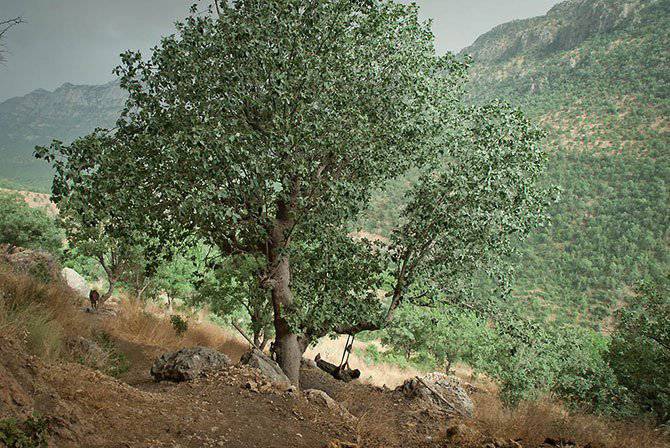 The base is hidden in the mountains of the Cadile ridge in northern Iraq. On this base, they are preparing new fighters, and also use it as a “base of rest” for those who return from the front for several days. 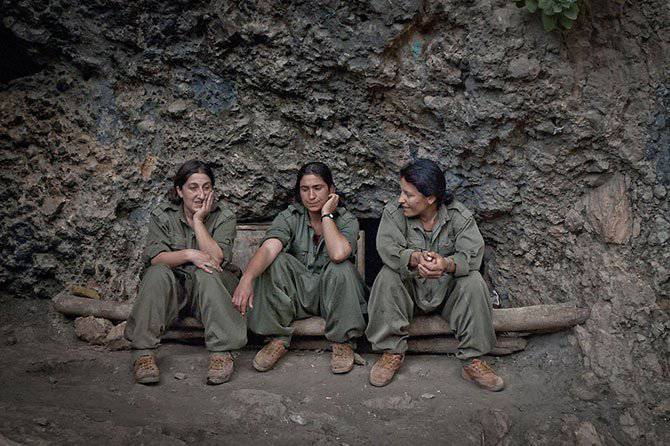 The fighters from the front come to this base for a short rest, and then return to the front again. 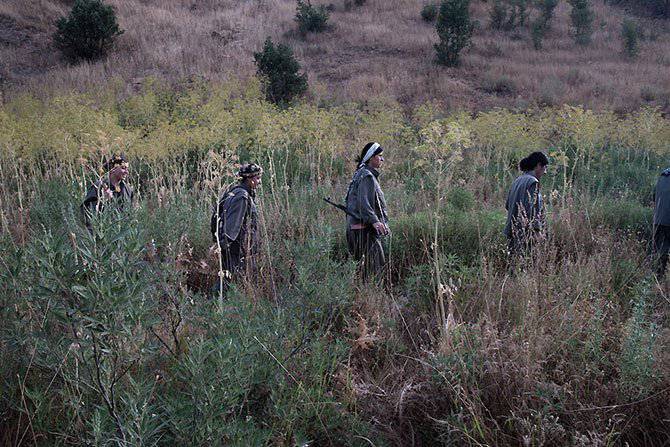 The fighters are going to meet in honor of Zilan Day. The PKK celebrates the Day of Remembrance of this Kurdish heroine quite widely: Kurdish politicians and even members of parliament take part in the events. Comrade Zilan (Zeinab Kinaji) 30 June 1996 was able to independently organize a large-scale terrorist attack. 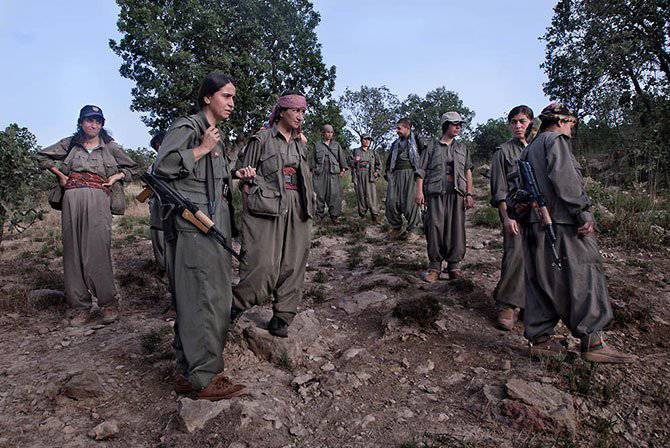 Dressing up as a pregnant woman, Zeinab Kinaji managed to mingle with the audience watching the Turkish military ceremony. As a result of the attack, 8 soldiers of the Turkish army were killed along with the suicide bomber, and 29 were injured. Party comrades declared Zilan a symbol of the struggle for the freedom of the Kurdish people and Kurdish women. 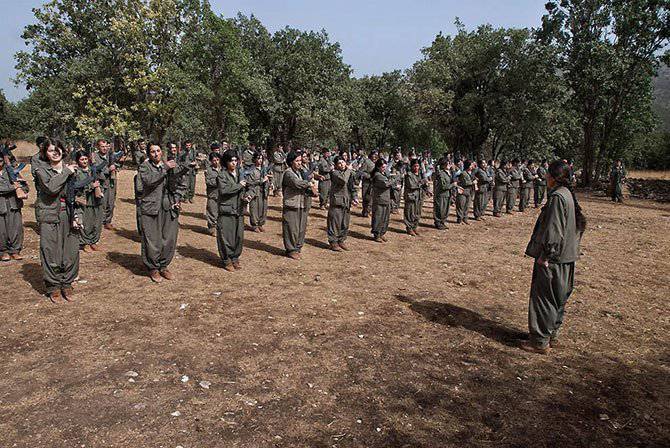 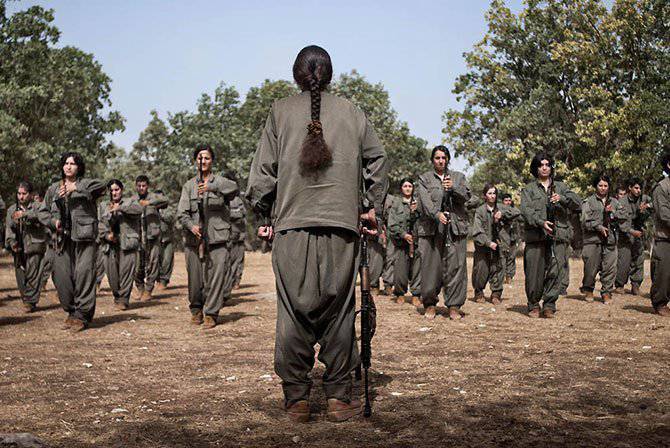 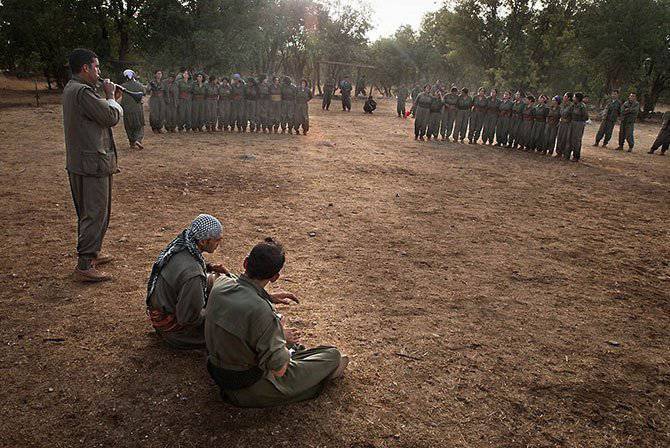 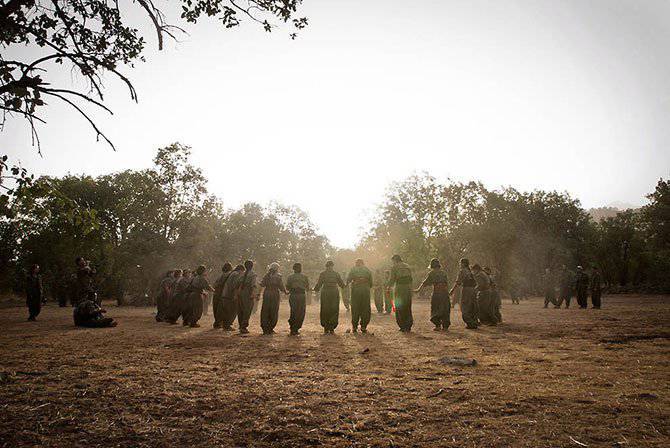 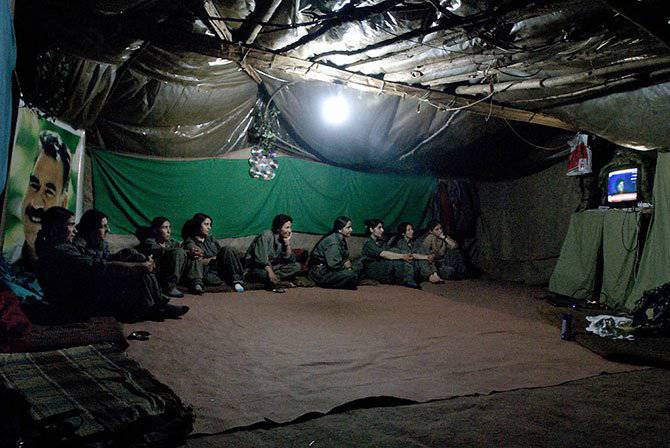