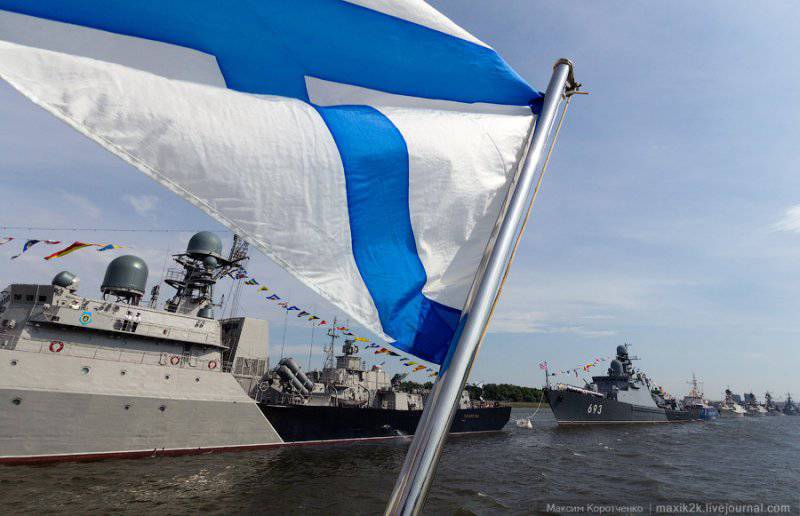 The specific geographical location of the Caspian Sea makes it a potential zone of geopolitical conflict. There are several international treaties, the purpose of which, first of all, is to regulate the issue of the use of natural resources. However, due to some reasons there are grounds to doubt that these agreements can be a full guarantee of the absence of any conflict. Therefore, in the media, statements by politicians and experts, as well as in the "kitchen" discussions, the topic of possible military actions in the Caspian Sea is regularly raised. Let's try to figure out what forces the countries have, whose shores are washed by this sea. 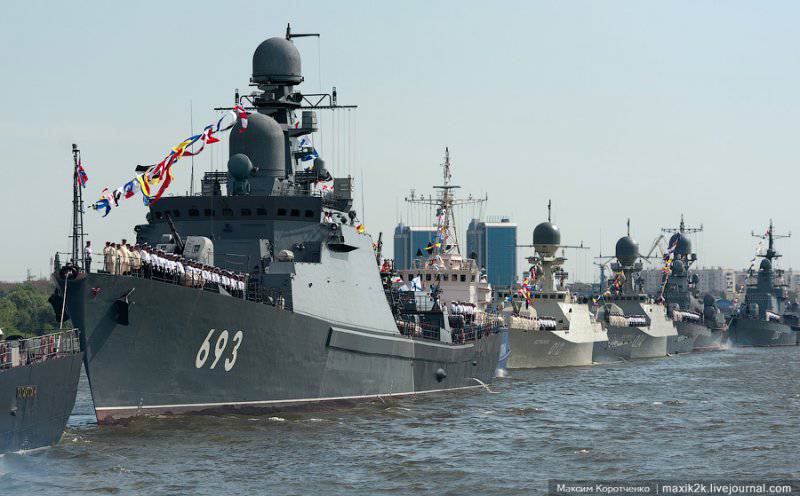 The region’s most powerful force is the Caspian. flotilla Navy of Russia. It includes ships and boats of various projects, the total number of which is almost three dozen. The largest, most powerful and armed ships of the Caspian flotilla are two patrol ships of the 11661 Cheetah project. The Tatarstan and Dagestan ships have artillery, torpedo and missile weapons: one 76-mm AK-176 gun mount, two AK-630M anti-aircraft guns, two 533 mm caliber torpedo tubes and two quad launchers for anti-ship missiles of the Caliber family . In addition, the crew has one RBU-6000 bomb to combat submarines and 20 Osa-MA anti-aircraft missiles for air defense. The watchdog Tatarstan is the flagship of the Caspian Flotilla. In addition to patrol officers, the flotilla also includes ships of other classes. These are small artillery ships of projects 21630 "Buyan" and 12411. The project "Buyan" is presented by the ships "Astrakhan" and "Volgodonsk". Each of these carries the A-100 190 mm artillery mount and the A-40 215-barreled multiple launch rocket system. In addition, for defense against an attack from the air, the Buyan ships have AK-306 anti-aircraft guns and launchers for 3M47 Gibka missiles. In addition, the Caspian flotilla has one small artillery ship MAK-160, belonging to the revised project 12411. Its armament is generally similar arms previous ships, however it does not carry launchers for anti-aircraft missiles. The MAK-160 main caliber is the 76-mm AK-176 artillery. The running characteristics of the 11661, 21630 and 12411 project ships allow them to navigate through most of the Caspian Sea without replenishing fuel supplies. To this range, you can add the range of anti-ship missiles (in the case of the "Cheetah"). In fact, at least half of the entire Caspian Sea is under the control of guard and small rocket ships alone. 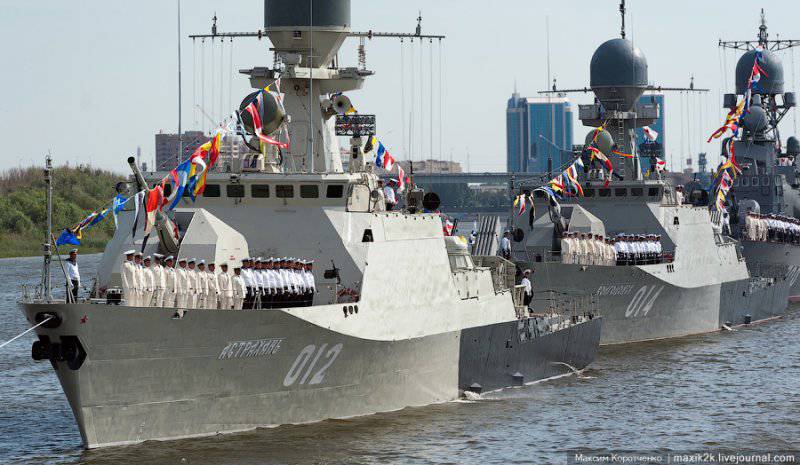 Despite the presence in the Caspian flotilla of fairly large ships with a relatively large displacement, the bulk of the equipment consists of boats of various classes and projects. At the same time, the majority of combat boats have served in the Caspian Sea for more than a decade. Thus, the newest of the artillery boats of the 1204 project was commissioned back in the 1972 year. Approximately the same situation with rocket boats, however, even the oldest of them (Р-50 "Karachay-Cherkessia") began service later than artillery boats 1204, in 1978 year. At the same time, there are newer boats on the Caspian Sea. AK-326 (project 1400М) was commissioned in 1990 year, and Р-32 project 12421 - in 2010-m. Due to such a large variation in the time of construction and the commissioning of the armament of rocket ships, the armament of the artillery ships is quite diverse. Artillery is mainly represented by AK-176 and AK-630, rocket armament - by Termit and P-15 Mosquito anti-ship complexes. The list of warships of the Caspian Flotilla of the Russian Navy is completed by six landing craft of projects 270, 11770 and 1176, as well as five minesweepers of projects 21820, 1258 and 12650. 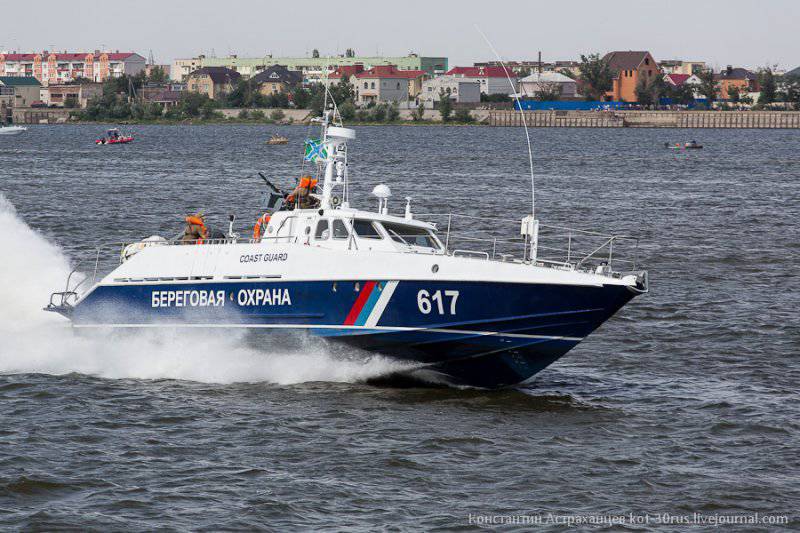 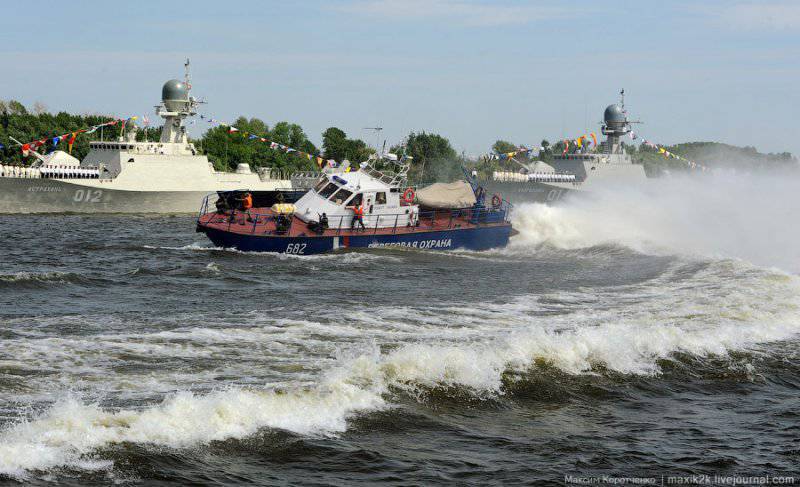 The main objectives of the Caspian flotilla, according to official statements, is to protect the coastal waters, fight poaching and protect national interests in oil-producing areas. Strictly speaking, similar goals are declared by other states that have access to the Caspian Sea. However, in quantitative and qualitative terms, their flotilla significantly lags behind the Russian.

The most powerful maritime group in the Caspian among foreign countries is Iran. In the Caspian Sea, the Islamic Republic has three naval bases, one of which is used for training purposes. A characteristic feature of the Iranian flotilla is the absence of large ships. The basis of the military power of the Iranian fleet in the Caspian Sea are rocket boats of Houdong Chinese-made, German Kaman and Sina projects. The main armament of all these boats is Chinese anti-ship missiles YJ-82. In addition, several dozen light boats and motorboats equipped with less solid weapons, from machine guns to recoilless medium-caliber guns, serve on the Caspian bases of Iran. Recently, there has been an increasing talk about strengthening the Iranian presence in the Caspian Sea. From time to time, admirals from Tehran promise to transfer more serious ships, patrol boats or frigates to the Caspian Sea. However, so far, the entire Caspian flotilla of Iran consists only of boats of various classes. 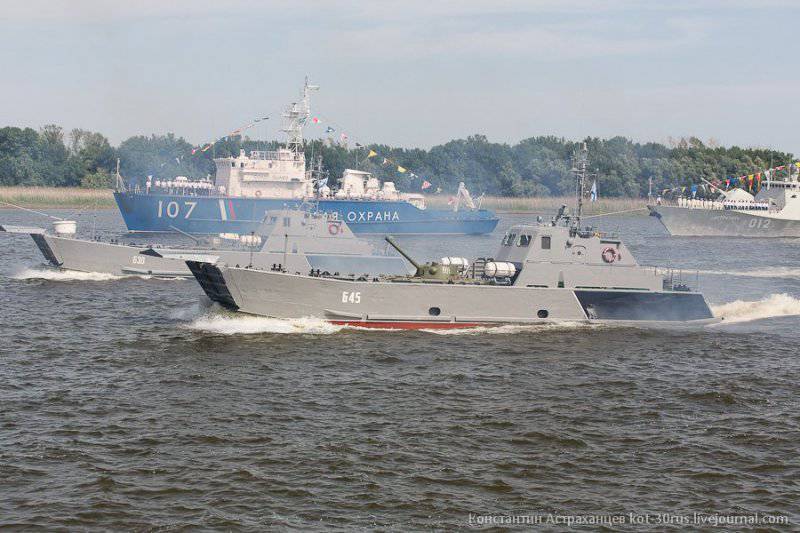 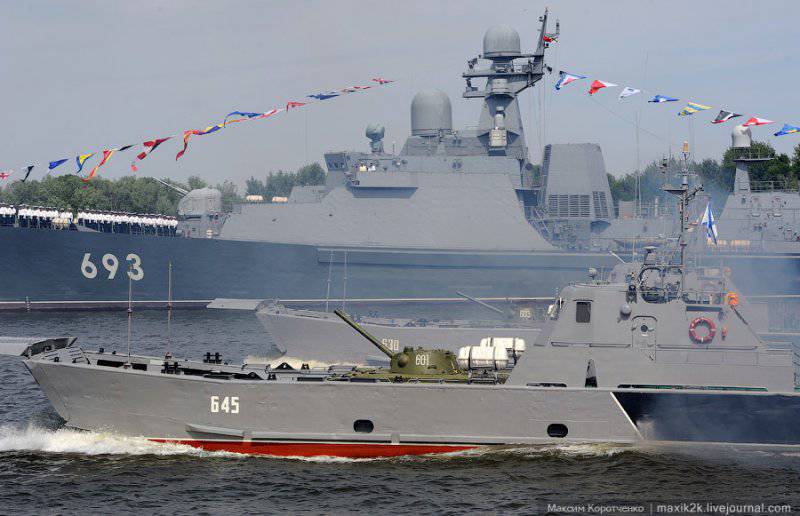 Amphibious boats of the project 11770 "Serna"

It is worth noting that Kazakhstan could share the second place in the power of its naval forces in the Caspian Sea with Iran. The latter lags far behind in the total number of vehicles, but it does have several more serious ships. The flagship of the Kazakh flotilla is the only rocket boat "Kazakhstan" project 20971. It was developed by the Russian Almaz Central Metallurgical Bureau “Almaz” and was built at the Kazakh factory “Zenit” in the city of Uralsk. The basis of the ship’s armament is eight X-35 anti-ship missiles. In addition to them, the ship has artillery, as well as air defense. In the coming years, Kazakhstan will receive three rocket boats of the Yoon Young-ha type, ordered in South Korea. Three more Korean-made boats, but only with artillery weapons, were received in the middle of the two thousandth. These are “Shapshan” (“Fast”), “Batyr” (“Brave”) and “Izzet” (“Fearless”), belonging to the Sea Dolphin project. A little earlier, Astana bought from Turkey a single patrol boat of the Turk project. It should be noted that large boats are not a priority for the development of the Kazakh fleet. The most massive class of vehicles in the Navy of Kazakhstan are patrol boats, of which there are more than fifty. It is noteworthy that most of the patrol boats that went into service after the collapse of the USSR were built by Kazakhstan either independently or with the help of Russia. Abroad was bought only about two dozen boats. Armament patrol boats rather diverse: from machine guns, including large-caliber, to artillery caliber 76 millimeters. 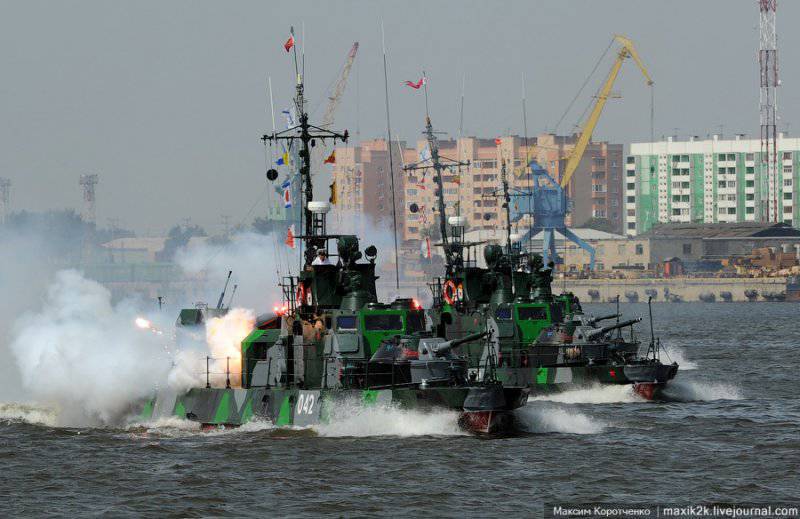 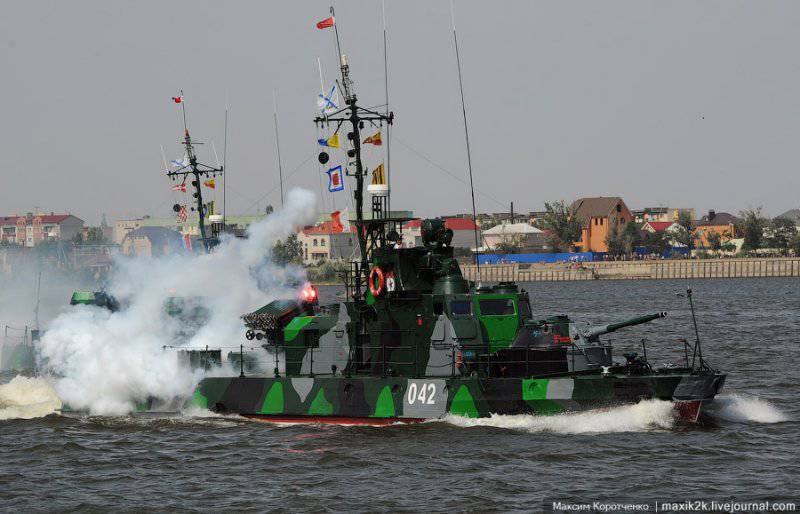 Azerbaijan has a relatively large fleet. This country has one patrol ship of the 159A project and five missile boats of the 205P project, built back in Soviet times. In addition, in the composition of the Azerbaijani fleet there are five patrol boats of various projects, including those purchased from Turkey. An interesting fact is that amphibious ships and boats are the most widespread type of equipment in the Azerbaijani Navy. About a dozen ships of 770, 771 and 106 projects serve on naval bases. The reasons for this original structure of the Caspian flotilla of Azerbaijan, apparently, are the peculiarities of the basing of the USSR Navy in the Caspian Sea, as well as the economic possibilities of the new independent state.

However, a dozen ships and boats with serious weapons and another ten landing ships are not an anti-record in the Caspian Sea. Turkmenistan received an “inheritance” from the USSR and, after its collapse, acquired an even smaller amount of equipment. Currently, this country has only two rocket boats of the 12418 "Lightning" project, ten patrol boats of Soviet, Ukrainian and Turkish production. In addition, Turkmen sailors serve on the same landing craft LCM-1, one clean-up boat and one tug. At the same time, it is necessary to make a remark: the boats of the project “Lightning” became part of the Turkmen naval forces only in the year 2011.

As we see, the composition of the naval forces of the Caspian states is quite heterogeneous both in quantitative and qualitative aspects. At the moment, the leaders can be called the Russian and Iranian Caspian fleets. At the same time, there are significant differences in the approach to the formation of the composition of these operational associations. Thus, in recent years, Russia has been trying to equip the Caspian flotilla with rocket and artillery ships. Iran, in turn, prefers to create a so-called. mosquito fleet. The reasons for this discrepancy are obvious: the Caspian flotilla of the Navy of the USSR and Russia always had a slightly lower priority than the other fleets. Therefore, the recently begun rearmament has become an occasion and a means for significantly increasing the potential of the Caspian Sea and updating its technology. In the case of Iran, the reason for the specific equipment of the naval forces is the need to deploy the bulk of the ships in the Persian Gulf. In addition, given the current political situation in the region, it can be concluded about the direction expected by Tehran strikes. Judging by the mosquito fleet in the Caspian Sea, the Islamic Republic does not consider Russia, Kazakhstan, Azerbaijan or Turkmenistan as potential adversaries, from which it is necessary to “shut off” an urgent powerful fleet.

As for the hypothetical military conflict between the states of the Caspian region, here some things are clear now. It is not difficult to guess that the same Turkmenistan with its few ships and boats can hardly fight with Iran or Azerbaijan. Much more unpredictable will be clashes between countries with good fleets - Russia, Iran, Kazakhstan or Azerbaijan. In the case of these states, the outcome of sea battles will depend more on the interaction of units and their management. In addition, other types of troops will necessarily be included in the conflict, which, in the end, makes forecasting even harder. Regardless of the current balance of forces or the possibility of a military conflict, all countries in the region should continue to develop and strengthen their armed forces. In the coming years, the Caspian flotilla of Russia will be replenished with two ships of the 21631 "Buyan-M" project and several other boats for various purposes. The construction of this equipment is carried out in order to update the flotilla, as well as to preserve its combat potential. In the light of regular statements about the strengthening of the fleets of the Caspian states, the renewal of our flotilla looks logical and useful. Perhaps in the future, the strengthening of the Caspian flotilla will even be able to prevent a conflict - “hot heads” from neighboring states will not begin military operations, risking to meet in battle with the “Buyans”, “Cheetahs” and other Russian ships.