How did the century of tanks begin

15 September 2012
8
World War I was a scrapping of eras. She changed the map of Europe, claimed the lives of 10 million, turned the usual ideas about the world, and the world itself. AT stories this great war was also marked by the fact that it was during this period that two fundamentally new types were used for the first time in the conduct of hostilities weapons - chemical and tank. The new weapon turned all military theory and practice upside down, making the customs of war even more cruel, and the man’s ability to destroy his own kind even more terrifying.

At the very height of the war, in the winter of 1916, the headquarters of the Entente's armies began preparations for a joint campaign to finally take control of the strategic initiative and lead the war to a victorious conclusion. It was decided to conduct operations to use the maximum of available forces and means, including those at the implementation stage. The main objective of the planned attack was the seizure of German communications centers and the transfer of the combat zone to the coast of France. The Somme River was chosen as the site of a major joint combat operation in England and France. The terrain conditions were unfavorable for maneuvers — too hilly and uneven, but the Allies hoped that numerical superiority over the enemy would allow them to overcome negative factors. To ensure the success of the operation, 6 cavalry and 32 infantry divisions were engaged. Fire support provided 2,2 thousand guns, 1,2 thousand mortars, 300 aircraft. For the first time it was planned to use a new type of heavy ground weapons - tanks.

The operation began on July 1 and continued until November 18 1916. The Germans were well prepared, and the success of the Allies was ambiguous. The British attack was repulsed, but the French in two days took several settlements and two positions. But the German army under the command of K. von Bülow in the shortest possible time was able to organize the defense and pulled up additional reserves.

By September 12, the Allies broke through the German position, but they didn’t have enough strength to develop the offensive. Then came to the aid of previously unused type of weapons. Exactly 97 years ago, 15 September 1916, the British launched the first tank attack in the history of mankind. For lack of experience, the crews of cars were still poorly prepared. The tanks themselves were non-maneuverable, bulky and slow moving. Night marches to the front were 49 machines, of which only 32 could advance to their starting positions. In support of the attack, only 18 tanks took part; the rest, despite their formidable appearance, could not overcome natural obstacles. But this number also had a decisive influence on the development of hostilities. Thanks to tank support, the British troops at the front of a length of 10 km advanced inland 4-5 km. The operation took only 5 hours, and the British manpower losses were much lower compared to other operations. 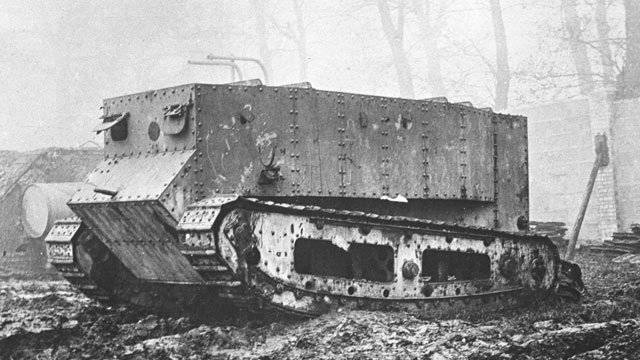 During the attack, the British used the Mk.1 tanks, an experimental model of which was released a year earlier, in the 1915 year. The creators called it "Little Willie". After a series of tests, the car was declared ready for combat. The first operating models of this tank came out in the 1916 year, at the same time the British command began to carry out an order for similar machines on 100. The tank Mk.1 was produced in two modifications: “Male” (the “male” version of the tank had a machine gun and two 57-mm guns) and “Female” (the “female” version was equipped with machine-gun armament). The thickness of the armor was 6-10 mm, it withstood fragments and bullets, but the direct hit of the projectile was destructive for it. The 30 car weighed in weight, the length was 10 m, the travel speed was 6 km / h, it could overcome trenches and wire barriers. The crew included a 8 man, in the same building with them was the engine. The temperature in the womb of the iron beast reached 50 degrees. The crew's equipment included a gas mask, as the crew lost consciousness from lack of oxygen and exhaust gases.

The next major use of tanks by British troops was 20 in November 1917 in the area of ​​Cambrai. It was the first mass tank attack. 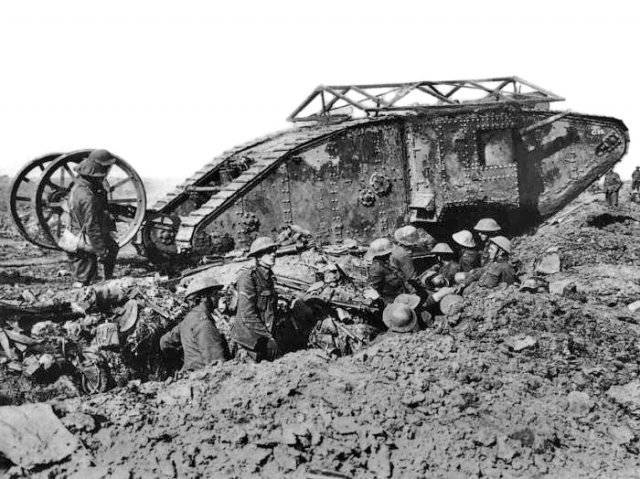 The 3 tank corps, equipped with 476 armored vehicles, took part in it. According to the plan of the operation, it was supposed, after breaking through the German defenses, to take Cambrai and go to Belgium. Early in the morning the tank corps struck the German positions. The sudden attack of a huge number of armored vehicles worked like a weapon of demoralization. The stunned adversary practically did not resist - the defenders had neither the skills to fight with tanks, nor the appropriate weapons, and most importantly - were put into a state of shock. Tanks made a truly frightening impression on the Germans, causing animal horror and panic. Toward the evening of November 20, the tanks, accompanied by infantry, advanced inland into 10 km and rushed towards Cambrai. More than 8, thousands of prisoners, 100 guns and several hundred machine guns were captured. But later there was a clear inconsistency in the actions of the infantry and tanks, and the British offensive stopped, and by November 29 stopped completely. On November 30, the German command organized a counter-offensive and soon the lost lands were returned. Then the British entered into battle 73 tank. The tanks attacked in groups of 3 machines located in a triangle, followed by infantry in three lines: the first captured the trench, the second destroyed the enemy's living force, the third provided the rear.

The first tank battle with the use of combat vehicles on both sides occurred only at the end of the war, 24 on April 1918. It was a clash between the British tanks Mk.1 and the German tanks A7V near the village of Viller-Bretonne. Artillery and infantry in this battle did not participate. Thanks to the higher maneuverability of the tanks and the coherence of the crew’s work, the British got out of the battle winners. 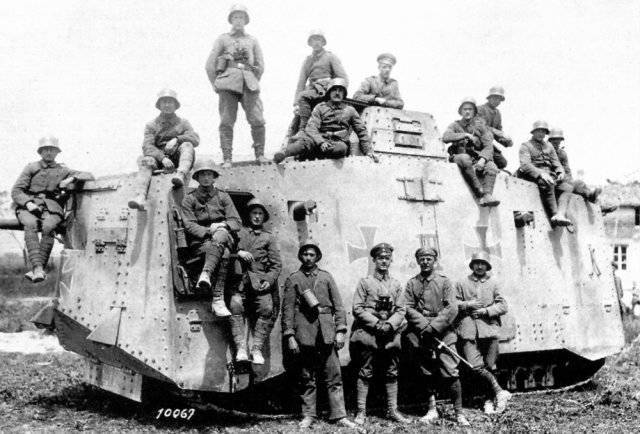 The order for the production of military vehicles in Germany was received by Josef Vollmer. The tanks had to meet a number of requirements: a reliable engine, minimized noise, the ability to replenish ammunition for 6 hours, a small silhouette, good sealing, quick replacement of the engine.

The tank designed by Volmer was called the LK-I (“light tank”), while the heavier LK-II tanks were also ready for release. It was supposed to make a third of tanks with machine-gun equipment, and the rest - with a cannon. They did not immediately take part in the hostilities - the war ended before the tanks were assembled. There was a paradox - Germany, which had the ability to make tanks that were not inferior to the enemy, slowed down their production due to the lack of flexibility of the industrial system. If she had a sufficient number of light combat vehicles, then it is unknown how the war would turn. 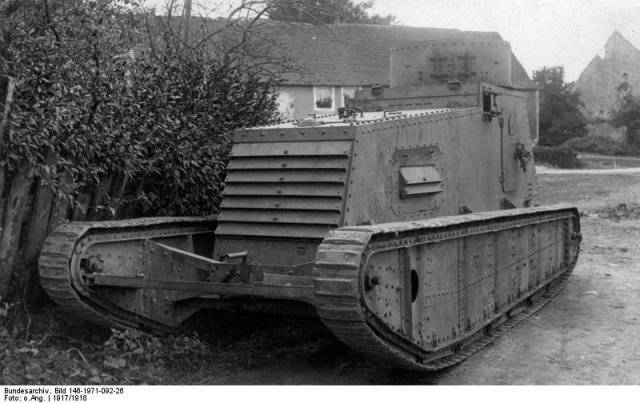 In the battles of the First World War, the tank clearly demonstrated its capabilities. In addition to significant physical damage, he introduced psychological confusion into the ranks of the defending side. It was clear that the enormous potential of the combat vehicle had yet to be revealed.