Ancient cultures of our country: tribes of the Bronze Age 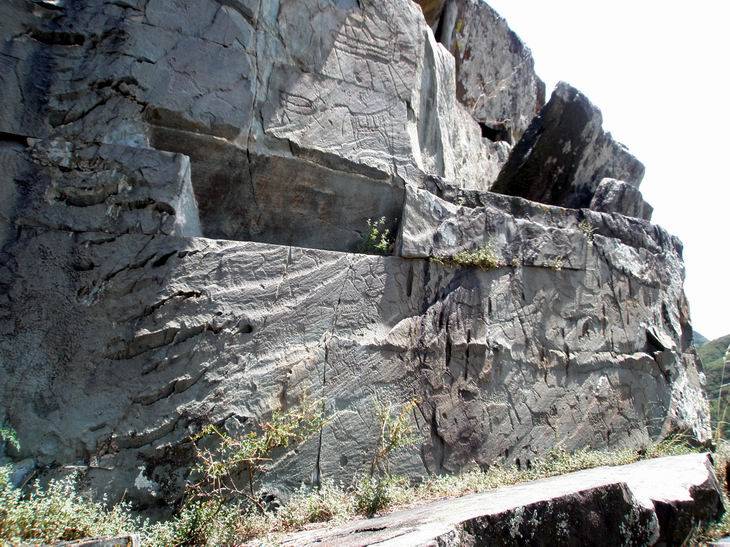 Petroglyphs of the Kalbak-Tash tract. It is interesting because here you can also see images of the Neolithic era (VI-IV thousand years BC) - figures of deer and goats; the Eneolithic and Bronze Age (III-I millennia BC) - this is the most numerous group of petroglyphs, among them there are female and male figures, as well as chariots, pack bulls and drivers. There are scenes of war, people with weapons in the hands, in particular with bows, fantastic predators and deer. There are also more recent images, that is, people have used this place for thousands of years! (http://www.liveroads.ru)

Third parent Kronid generation of people speaking
Copper created, nothing with the generation is not similar to the former.
With spears. There were those people mighty and terrible. Loved
Terrible affair Ares, violence. Bread did not eat.
Stronger than iron was their mighty spirit. No one approach
He did not dare to them: they had great power,
And neoborny hands grew on the shoulders of powerful.
They had copper armor and copper dwellings,
Copper work done: no one knew about the iron.
Hesiod. "Works and Days". Hellenic poets of the 1999th-1963rd centuries BC. Epic. Elegy. Yambas. Melika / Resp. ed. M.L. Gasparov. - M .: Ladomir, XNUMX. Verified with the XNUMX edition. Translated by V.V. Veresaev. 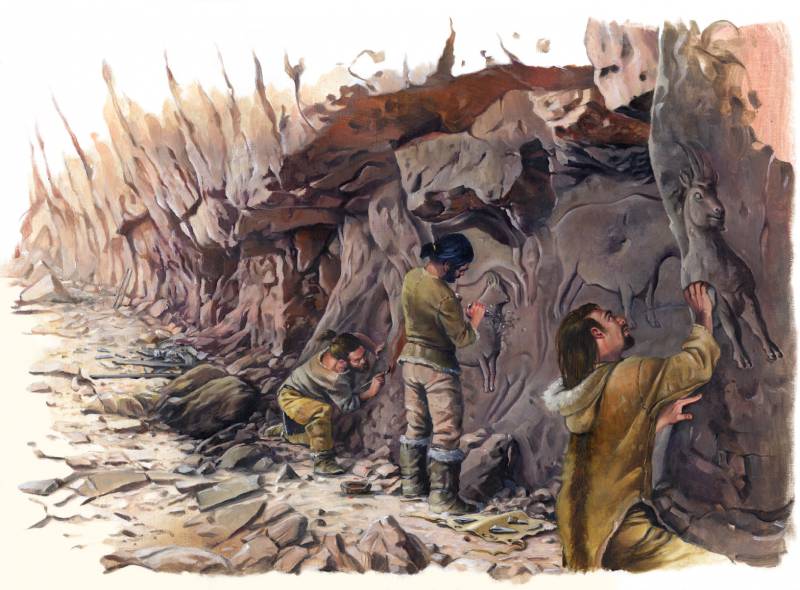 And this is how they may have been created ... Ill. Pierre Joubert (1910-2002)
Material история our homeland. Having visited the ancient caves, today we again go to the wide expanses of our Motherland to get acquainted with the archaeological finds of the Bronze Age discovered there. And let's start again with the tribes of the Volga region, where the first needles, punctures, awls and small knives made of copper appeared in the III millennium BC. NS. But the metallurgy of bronze was mastered by its inhabitants only by the middle of the XNUMXnd millennium BC. NS. And what are we seeing? Small tribes that had been scattered until then and isolated from each other immediately began to closely communicate, and with communication came the merger and the formation of the first cultures, such as Srubnaya, Andronovskaya, Abashevskaya and a number of others. And already on their basis, the formation of modern peoples began - the Kazan Tatars, Chuvash, Mordovians, Mari, Udmurts and others. 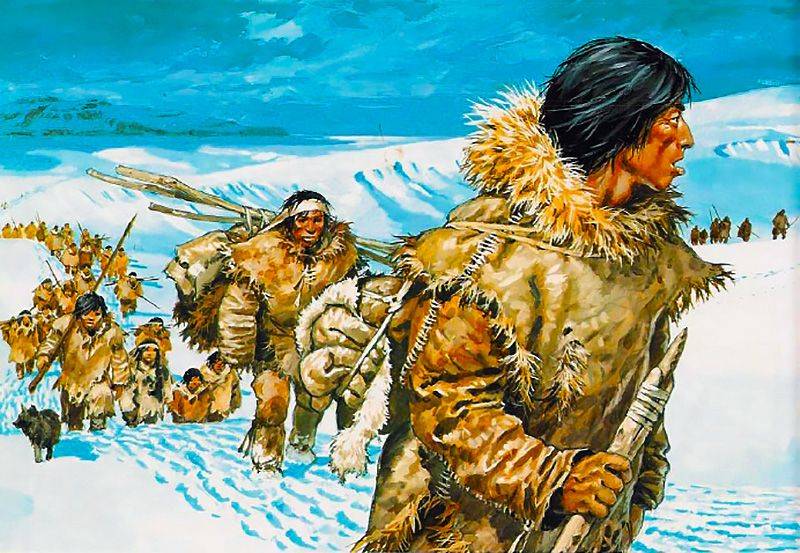 This is how the ancient people moved from place to place in search of still not frightened animals, and then ... more and more often they began to settle permanently. Fig. Pierre Joubert (1910-2002)

The studies of the Bronze Age in this area were started again by the same Kuibyshev expedition, which we have already talked about. She managed to find out that in the northern, forest part of the Volga region, and on the Lower Kama at that time, there were tribes engaged in hunting and fishing, who had Neolithic people as their ancestors. In the south, tribes of pastoralists roamed, while the interpenetration of these cultures took place, which complicated the work of archaeologists.

In the Bronze Age, people who lived in the forests already knew how to make dugout boats. Fig. Pierre Joubert (1910-2002)

Here, near the numerous tributaries of the Kama and Volga, the expedition found several dozen settlements of the Bronze Age. These settlements had no fortifications. If there were any clashes between their inhabitants, then, according to A.I. Soloviev, strictly regulated, in the form of single combats and until the first blood or the first killed. There were few people and people were valuable! It is interesting that large houses were discovered here (or rather, what was left of them, of course!), With an area of ​​50 to 200 square meters, moreover, a complex log structure, with many hearths and a number of auxiliary outbuildings. In the center of the so-called Balym site, an altar was found - an elevated platform: with a campfire at the foot, more than 10 square meters, and a dozen smaller bonfires that surrounded this elevation on all sides. Six human burials with things were also found here. Obviously, this place was very honorable and not everyone was buried here. It is interesting that these tribes did not pile mounds over the burials, so no other burials were found here. But they found: various decorated vessels, copper slag, fragments of crucibles, tools made of flint and bronze, as well as many bones of domesticated animals. 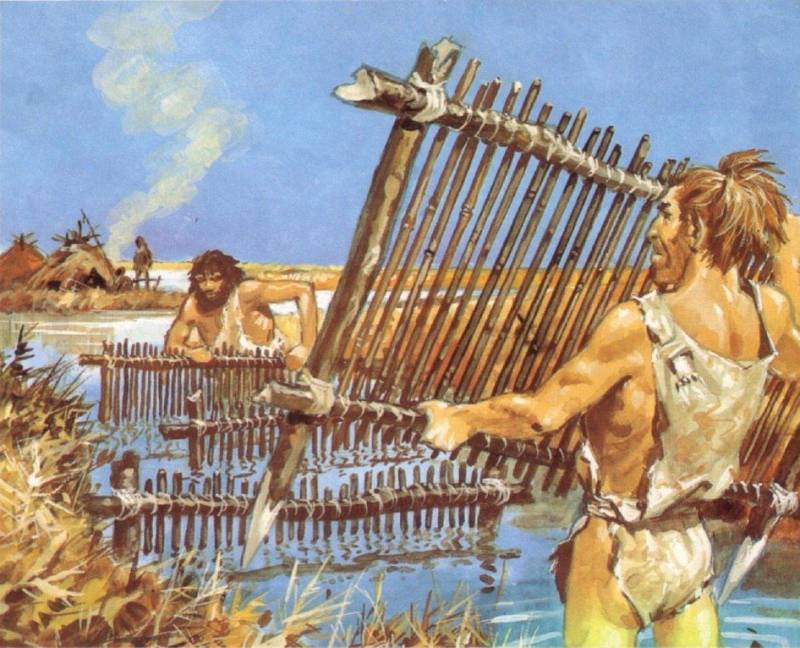 Log burials in the south of the Volga region

Having gone to the South, to the Saratov steppes, we will meet there with the burials of the Timber culture. They buried their dead under the mounds, and turned the graves themselves into a kind of log cabins. These tribes were engaged in pastoral cattle breeding, but they also knew fire-slash farming. In the middle of the II millennium BC. NS. individual tribes of the Srubna culture separated from the expanded Lower Volga group of tribes and went to the Azov, Donets, Northern Donets regions, and further to the Dnieper, while others left to the north in the Samara and Ulyanovsk regions. Later, already at the turn of the II and I millennia BC. e., the tribes of the Andronov culture, which formed in southern Siberia, also came close to this territory. 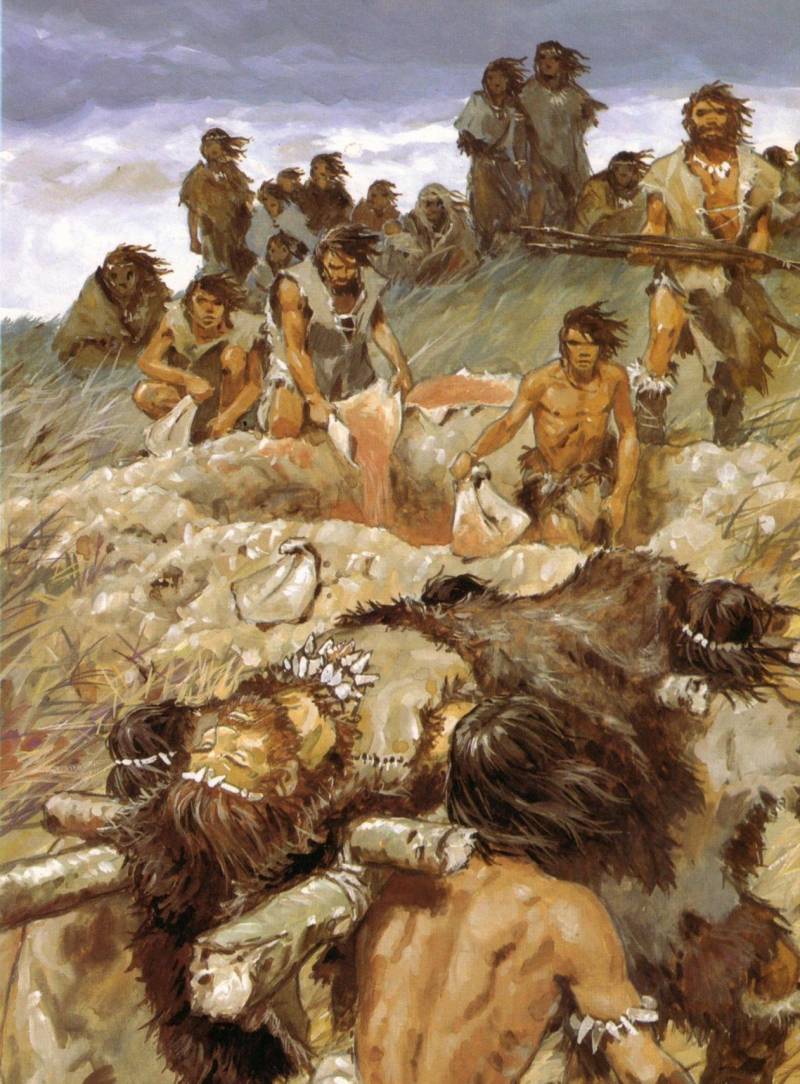 The burial of people in that era was of exceptional importance. Finding an ancient burial place for an archaeologist is always a gift of fate. Fig. Pierre Joubert (1910-2002)

A very interesting settlement on the Suskan River

Back in 1951-1952. on both banks of the Suskap River - one of the Volga tributaries, an ancient settlement was found, the excavations of which gave a lot of interesting information. It was located on a cape, but from the side of the coast it already had a low rampart and a moat. That is, the inhabitants of the village, and on both banks, had to be afraid of enemies, which is why they fortified it and chose a place washed by the river.

Arrowheads in the Bronze Age were still made of stone, especially if they were used for hunting. For example, there were some among them who inflicted deep chopped wounds. National Museum of Denmark, Copenhagen

Bow from Holmegard. It was about 170 cm long and 6 cm wide. Belongs to the Mesolithic era. National Museum of Denmark, Copenhagen
Only two houses were found on both banks, but what kind! During the excavations, a black rectangular spot 22 meters long and 12 meters wide was found, and at first a pit was dug here 1,2 meters deep, and clay was laid on the floor. Many bones of domestic animals and shards of broken pottery were found in it. Here, more than 30 pits were found for supporting pillars, which ran in two rows along the length of the house, as well as along the walls and in the center of the building. That is, the basis of the roof was a gable log structure supported by these pillars. 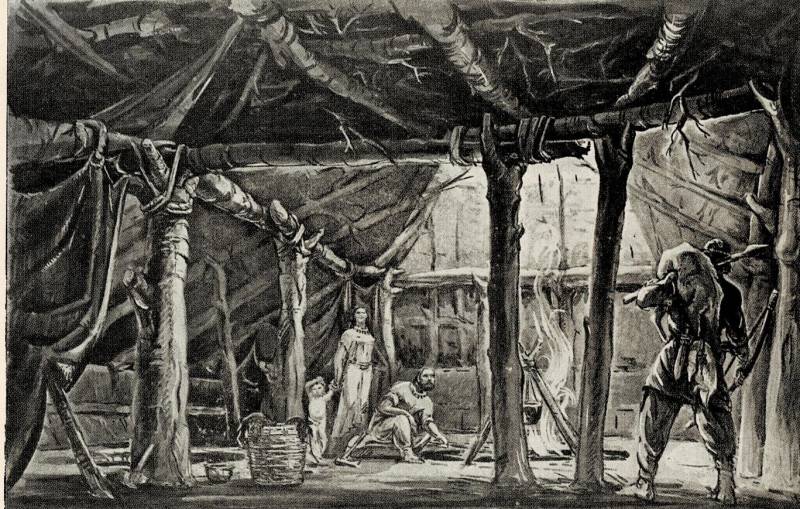 Reconstruction of a dwelling from a Bronze Age settlement on the Suskan River. Reconstruction by architect G.B. Shchukin. Illustration from the publication "In the footsteps of ancient cultures", M., 1954
In the center it was also supported by pillars connected by longitudinal beams. Then the logs were covered with brushwood, and the brushwood was covered with earth. It was necessary to cover 270 square meters in this way, that is, the people who lived in this house were good builders, and in addition, they had bronze axes, teslas, chisels, and knives. 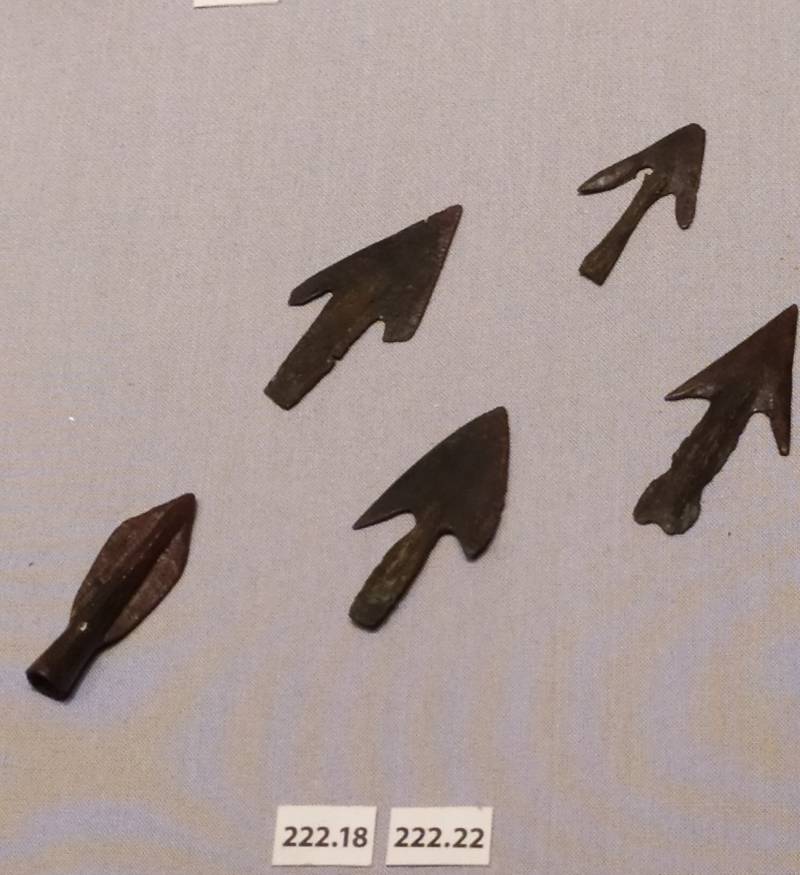 Bronze arrowheads. VIII-VII centuries. BC NS. State Historical Museum. (Photo by Anton Bazhin)
Inside the house, they found one large hearth and many small ones, apparently belonging to separate families. About 150 people could live in such a house, so they needed a lot of food. But where did they store the perishable food then?

"Refrigerator of the Bronze Age"

It turns out that its inhabitants had their own refrigerator! And right in the house. On the clay floor near the exit, archaeologists found a black spot about 1 meter in diameter. They began to excavate it, although it was very difficult. And only at a depth of 5 meters the secret of the "pit" was revealed. There were found walls, braided with rods, a log bottom and earthen vessels with the bones of domestic animals. Moreover, at the very bottom, even a whole skeleton of a piglet was found. That is, it was a cold storage pit for food! And these pots were lifted with the help of ropes passed through special holes made at their edges! In the second settlement opposite, they also found exactly the same pit, even deeper. 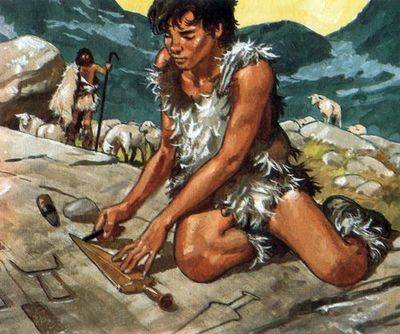 At the same time, the people who lived here already knew how to ride a horse. This is evidenced by the bone cheekpieces found here - the details of the bit. But they were not only horse breeders, but also farmers, as evidenced by the finds of stone grain bearers. It is interesting that the development of steppe lands due to dense turf was beyond the power of the inhabitants of these houses. But they thought of burning forest plots for fields, the land on which was cultivated with stone hoes, but they already used bronze sickles for the harvest. 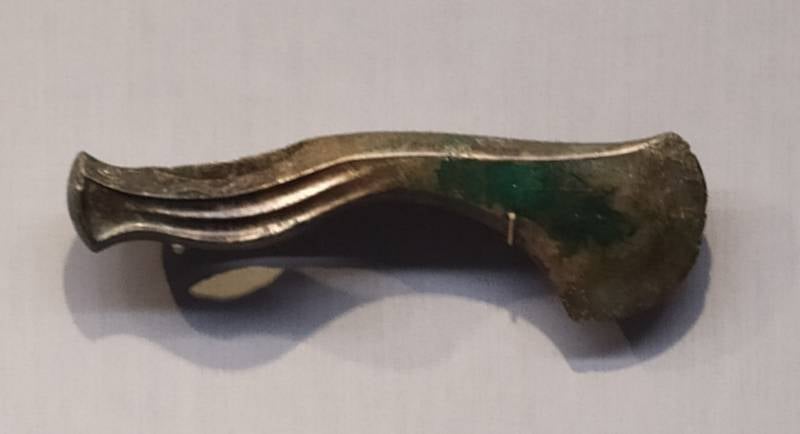 Bronze ax. First third of the 1st millennium BC NS. State Hermitage. It is one of the museum objects displaced as a result of the Second World War. Until 1945 he exhibited at the Museum of Prehistory and History in Berlin. (Photo by Anton Bazhin)
However, they also ate by hunting (bones of wild animals and birds were found) and, of course, fishing, as evidenced by the found fish bones, including the bones of large pikes. They beat them with bone harpoons, and the small one was already caught with nets with clay weights. Well, the nets themselves were woven, most likely, from strong horsehair.

And this is how our ancestors caught big fish! Fig. Pierre Joubert (1910-2002)
And, of course, the inhabitants of the village were engaged in various crafts. Earthen vessels are very skillfully fashioned and covered with whimsical ornamentation, there are many items made of stone, since their metal was obviously imported and therefore was expensive. As before, axes, arrowheads and even knives were made of stone. Although, most likely, all these tools were viewed as a relic.

Where have you gone and why?

The most interesting thing is that the results of the excavations unambiguously indicate that the inhabitants of both villages left them quite peacefully. There were no traces of fires, whole and valuable things trampled into the mud while fleeing or fighting, and most of the finds are blanks or defective and broken tools. All valuable things, and first of all metal, they took with them. But that's why they left these habitable places and where they went later, alas, is unknown.

Excavations of the Volga region continue today. For example, in July-August 2015 archaeological research was carried out by an expedition of the Penza State Pedagogical Institute named after V.I. V.G. Belinsky, who studied the Razhkinsky burial ground of the 1956rd-1957th centuries. n. NS. Work here began back in XNUMX-XNUMX, but continues to this day - this is the "slow science" of archeology. 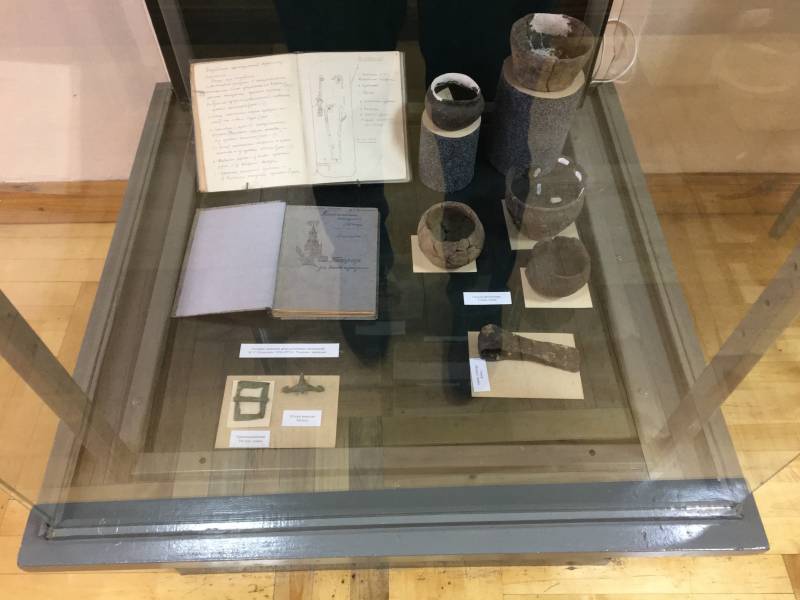 Objects and archaeological diaries from the excavation site of the Razhkinsky burial ground 1956-1957. Penza Regional Museum of Local Lore. Photo by the author 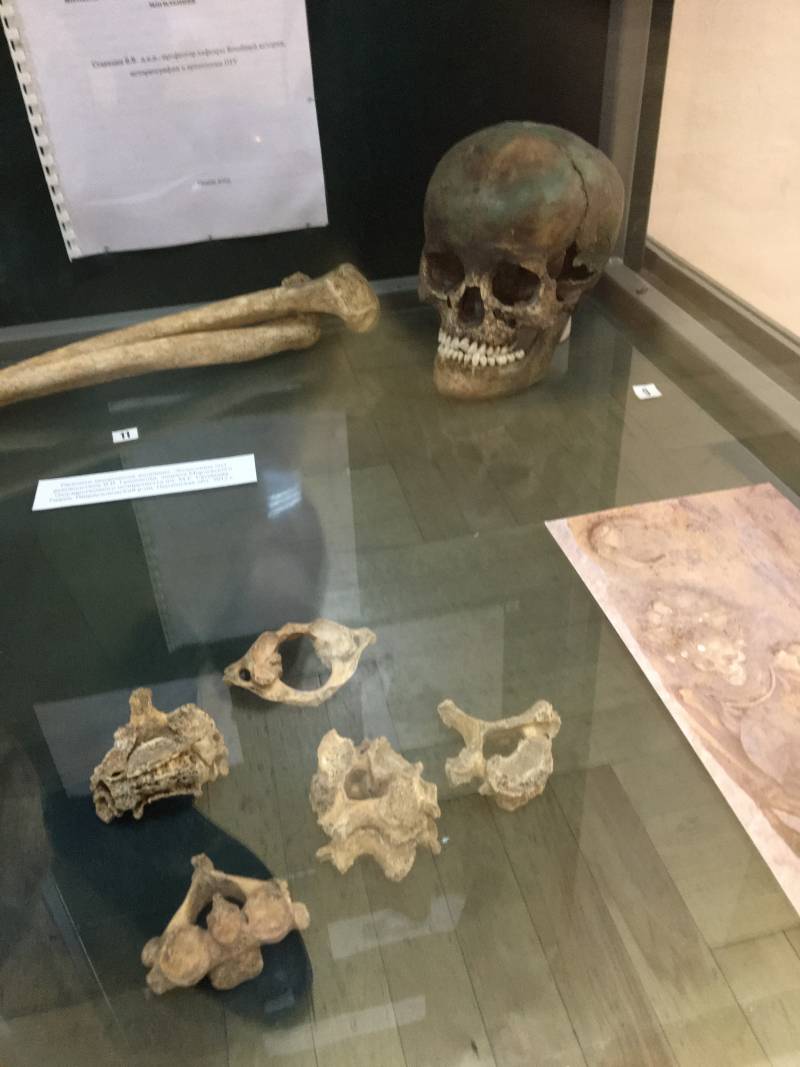 But these are the skulls and bones ... Photo by the author
First, 19 burials were found there, then, already in 2012 - 10 more. In 2015, the excavation area was 645 square meters. m., and 32 burials were found. Moreover, the men do not have funeral equipment, but the women - with a large number of jewelry: beads, beads, breast plates and bracelets. It is believed that these burials belong to the initial period of the history of the Mordovians-Moksha.