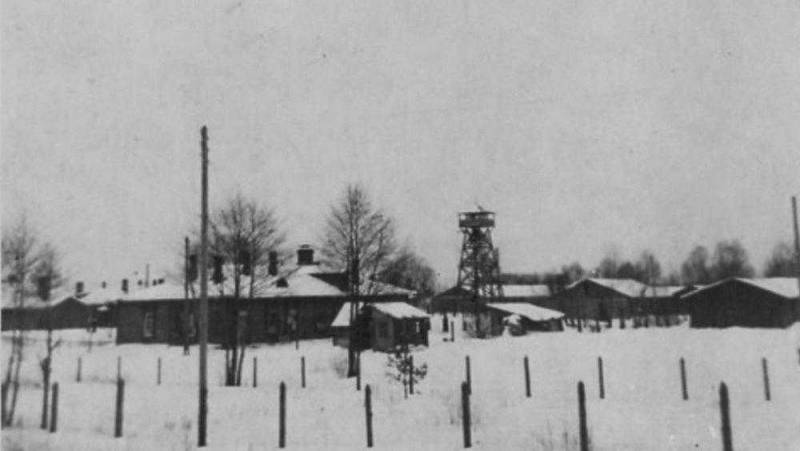 Since 1941, a regime of genocide of the population was established in the occupied territories of the USSR, both on the basis of nationality and others. In principle, the entire population of the USSR was perceived by the Nazis as inferior and deprived of basic human rights. And the policy of its destruction was carried out firmly and steadily, often with the use of accomplices from among other nations.

A word to an eyewitness:

“For the first two weeks the Germans did not feed the prisoners. Then, for about a week, they were fed like this: an officer on a cart loaded with rotten meat drove into the camp and threw pieces of meat. A hungry crowd of prisoners of war pounced on the meat soiled in the mud, and the officers and soldiers accompanying the cart opened fire on the crowd from machine guns and submachine guns. After that, they began to feed the prisoners with unrefined buckwheat, as a result of which diseases of rectal gangrene spread massively in the camp. "
Dulag 142 held up to 80 people, the daily death rate reached 000 people a day, at least 200 people were shot in the camp, a significant number during transportation and outside the camp. So, 1500 cadets were shot on the territory of the city prison, and other prisoners were also executed there. It is believed that up to 50 thousand people died in the camp. In principle, the scale is quite similar to other camps, like the infamous Uman pit. What to do with the prisoners, the Germans planned initially - as part of the Ost plan:

“All sentimental objections should be dropped. We need to rule these people with iron determination ... In military terms, we must kill three to four million Russians a year. "
And they did it without deviating one iota. They did not forget to rob beforehand - among other things, shoes were confiscated from all the prisoners. Torture was actively practiced:

“Among them is the corpse of a man in military uniform, the right hand was severed with some sharp object, the chest was shot in several places. The second corpse of a young woman is barefoot, with the severed phalanges of her left hand, with signs of military uniform (military uniform buttons). Another corpse of a man, stripped naked, with a severed left leg and right arm. In another pit, the corpse of a man in a gray khaki cap was found. Above the brow arch there was a bullet hole protruding to the back of the head, the chest was bloodied. "
Everything was done so that no one survived the captivity, the atrocities slightly decreased only in 1942, when it became clear that the war was dragging on, and the prisoners could work. But even then, the death rate in the camp was from one hundred people a day.

The civilian population was exterminated less planned, and no less brutally:

“They put them facing the pit and shot them with machine guns or machine guns. About 3500 people are buried in this pit. In another branch of the Verkhniy Sudok ravine in the upper part of the plateau, 370 people were buried in three pits. Nearby, at the bottom of the ravine, 830 people were buried in one large pit. To the right of this place, at the edge of the ravine opposite the alley leading to Sovetskaya Street, three more pits with the remains of 568 people were discovered. "
In addition to planned executions aimed at destroying those who could participate in the Resistance, there were also gratuitous atrocities to intimidate the civilian population:

“… In August 1942, along Lesnye Sarayev Street, near Matryona Mikhalkina's house, at 16 o'clock, from a car painted black, without windows, groans and screams of male voices were heard. Three armed Germans were standing near the car, after a while these Germans released a huge dog from the car, all covered in blood - chest, neck, muzzle and paws, which tore its victim to pieces. Mikhalkina confirmed that such incidents were frequent, especially in relation to the partisans. "
In one relatively small town of the RSFSR alone, about 15 civilians were killed. This figure was established by the Government Commission, the real number of victims may be large, the Germans themselves did not keep accurate records, and some of the graves of the dead were destroyed, including by blowing up mass graves. At the same time, the reasons for the execution could be completely different - from working in the Soviet authorities and to unwillingness to go to work in Germany, or even poorly cleaned boots of the occupier. To this should be added the forced removal of the population and post-war migration, which led to the physical impossibility of any accounting.

“Since December 26, 1941 in Bryansk and Ordzhonikidzegrad, a special team 76 has settled. counted 2 corpses of slain old men, women and children. "
The last executions were carried out literally on the eve of the liberation of the city. Even in the fall of 1943, amid the growing military catastrophe of the Reich, extermination and genocide remained the most important task for the Germans. The launched conveyor of death will not be stopped until the very end of the war. In total, in a small region of Russia alone, about 19 Jews and Gypsies were exterminated. An accurate count is again impossible, people from other regions were also moved to the ghetto, although it was Jewish organizations that did a tremendous job to establish the names of their victims. The work is much deeper than the names of the victims of the genocide of other nations.

That war in the people's memory is strongly associated with the Germans, but this is not entirely true - in addition to the Germans, there were also punitive forces of other nationalities. The Hungarians left a bad memory:

“When they arrived in Khvoshchevka on March 21, they immediately began to set fire to the huts. And the winter of 1942 was harsh. There was so much snow that some of the huts were completely covered, only one chimney was visible, from which smoke came out if the stove was heated. On the same day, the Magyars gathered all the old men and tall boys and drove them out of the village in the direction of Khinel. There, in the field, they were all shot. First, they stripped naked, then they shot from a machine gun. Then they stabbed and cut them with bayonets. "
Noted, including the use of BOV:

“The German fascists, who sent the 6th Hungarian str. Division to the Suzemsky region to fight the partisans, during a raid on May 16 of this year. in the village of Ustar, Suzemsky district, Oryol region, the entire village was burned to ashes, 170 houses and buildings, including 2 schools and one mill, brutally tortured 70 people of the elderly, women and children, including 20 people burned in the fire and gassed 19 people. "
Finns:

“They didn’t believe one woman who gave them two eggs and, having searched her house, they found another egg. For hiding one egg, her house was burned down, where all her property was burnt. "
Ukrainian nationalists and even ... immigrant landowners:

"Sonderführer Voldemar Bischler appeared in the USSR in February 1942 near Vitebsk as commandant of the Abwehr command 210."
Bishler Vladimir Avgustovich, a German father, a Russian mother, left Russia in 1918 after the loss of the estate, and returned as one of the most fierce punishers, gathering the same rabble around him, and the Bryansk and Smolensk regions were filled with blood:

“As a result, Bishler's detachment committed the following atrocities: 37 settlements of the Kletnyansky district and 4 Dengubovsky s / s [council] of the Dubrovsky district were burned; kolkhoz farms' yards were burned in 1591; 127 civilians were shot; 3233 Soviet citizens were taken to hard labor in Germany [...]. On the territory of 41 settlements, not a single living soul was left, no buildings and livestock. Everything was destroyed [...] "
The Germans trusted his "hunters" with something that even the hardened executioners did not want to get dirty in.

We know a lot about war as a confrontation between armies, a lot is written about battles and technology, but that war was also like that. In a dimension where there is not a drop of humanity, and what the Germans and their allies did has nothing to do with anything human. And all this is mentioned much less often, which ultimately leads to the emergence of “Bavarian lovers”. And we must remember: those who came then were not human.

The article uses materials from the collection “No statute of limitations. Crimes of the Nazis and their accomplices against the civilian population during the Second World War: documents and materials ”. Bryansk region.