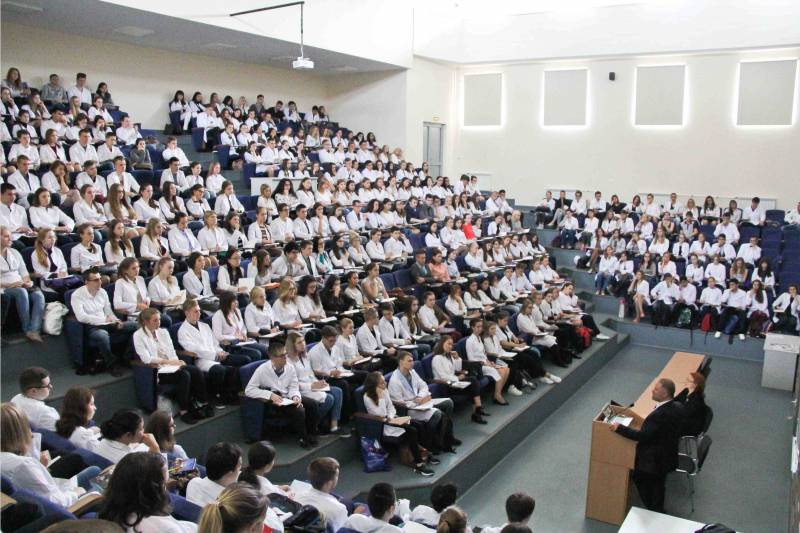 How can higher education reform harm the state?

In most cases it is very simple - it is enough to graduate ignoramuses from universities. But in modern Russia there is a different path. And it's much sleeker.

But first a little stories.

In the Soviet Union, fundamental and applied science was engaged in specialized research institutes (Research Institute). It was here that routine scientific work was carried out with varying degrees of efficiency. Institutions that were utopian in their essence (for example, the Research Institute of Marxism-Leninism) and world-class institutions existed in the Union. Among the latter, for example, the Institute of Chemical Physics, in which the only Russian Nobel laureate in chemistry Nikolai Semenov worked.

Higher educational institutions for the most part were separated from research institutes and were mainly engaged in education. Of course, quite serious research was carried out at departments in universities, but they could not be compared with the scale of specialized institutes.

At the same time, there were exceptions - for example, the Novosibirsk Academgorodok. This cluster of the Siberian Academy of Sciences brought together many specialized scientific institutions and universities. Senior and junior researchers worked with students at lectures, and future specialists were sent to local research institutes for practices and seminars.

With the collapse of the USSR, the new leaders took care of the transfer of domestic science and education to foreign standards. And in the West, they practically do not know what a research institute is.

The lion's share of breakthrough research there is carried out at universities - from the first year students are taught to engage in applied and fundamental science. Taking into account the considerable technological lag of our country from the leading countries, we decided to introduce exactly this know-how. Not multiply to increase funding for science, following the example of the West, namely, to plant a real scientific life in universities.

This is how national research universities appeared, for example, NUST MISIS National Research Technological University Moscow Institute of Steel and Alloys. From the point of view of natural and technical sciences, such innovations can only be welcomed.

Firstly, students are determined earlier with a future profile.

Secondly, the qualifications of teachers are much higher - in their free time from lectures, they are engaged in world-class research and do not lose their qualifications, bringing science to the young people from the forefront. It remains only to measure the whole thing correctly.

How to tell if a university is doing well or badly?

As a result, a failure - none of the selected universities by the reporting year 2020 was included in any of the ratings - British QS, THE and Chinese ARWU. Among those included in the top 5 was Moscow State University, but it was not initially enrolled in the "100 - XNUMX" project.

The specialists of the Accounts Chamber argue that 80 billion of budget money for the project was wasted. However, this is a topic for another conversation, and now we will concentrate on the western orientation of Russian higher education.

Now, to be successful (read - access to budget funding), a Russian university needs prominent scientists on its staff.

How to become a prominent scientist?

Of course, to be published in peer-reviewed foreign journals, thus proving their scientific worth. It is important that the article is cited as many times as possible - this is how the citation index grows, perhaps the most controversial artifact of the modern world.

In the field of natural and technical sciences, everything is simple - no one can fundamentally deceive anyone. By and large, one cannot argue against the laws of physics and mathematics.

But with the humanities, everything is more complicated.

For example, to become a professor at any leading Russian university, you need to get into the British SCOPUS database. Once again, a private office SCOPUS from a "friendly" UK determines (albeit indirectly) whether a scientist from Moscow State University will work as the head of the department or not.

In scientific Russia now it is like this - if the articles of a researcher are included in databases such as SCOPUS, then you are respected and with career prospects. In general, it is better to publish in English in foreign journals with a good impact factor, that is, with high citation in the scientific community.

Such are the realities of the large-scale reform of the higher education system, which started in the late 2000s.

Tricks with Hirsch indices together with impact factors have been a dubious idea before. For example, how to achieve recognition if you specialize in a narrow topic for which you don't get much grants, and you can't send an article to a reputable magazine? And now it has become even more difficult.

An illustrative example is with historians, which was very vividly characterized during the round table of the Public Chamber "Publication activity of universities in the humanities", which took place on October 28 at MGIMO. Dean of the Faculty of Governance and Politics Henry Sardaryan spoke about the requirements of British journals to authors from Russia to choose topics for articles exclusively on topical issues for Europe.

That is, to openly criticize the foreign policy of the Kremlin, to consider the results of the Second World War through the prism of European politics and to look for reasons for another repentance of Russia for its past.

"Among the priority topics for the British in the humanities, one of the first lines is occupied by issues that run counter even to the Constitution of the Russian Federation in its latest edition."

He echoes the dean of MGIMO Alexander Vasilievich Okorokov, Doctor of Historical Sciences, Deputy Director for Research of the Russian Research Institute of Cultural and Natural Heritage. D. S. Likhachev ":

“Research by Russian scientists, in particular in the socio-humanitarian sphere, is often associated with the history of the state development of our country and the goals of preserving traditional national values, which sometimes arouses rejection among Western colleagues. Especially in recent years, there has been a period of active anti-Russian rhetoric and sanctions policy of some foreign countries. However, the currently obligatory assessment of the effectiveness of the work of Russian scientists, in particular, humanitarians in publications in foreign publications, forces domestic researchers to "adjust" to Western concepts, sometimes to "tick" to sacrifice the traditions that have developed for decades in Russian scientific schools, which causes a tangible a blow to the prestige and authority of Russian researchers. However, the opinion of Russian scientists was not taken into account by the Ministry of Science and Higher Education of the Russian Federation, which causes, in the light of modern state policy aimed at strengthening the national interests of Russia, at least bewilderment. "

There is only one way out in this situation - to create our own independent system of scientometrics with home-grown impact factors and Russian analogues SCOPUS.

In this case, there is no need to talk about the scientific recognition of foreign researchers, but at least there is a chance to preserve the Russian identity. If it does not work out, then people who have a subtle sense of the mood of the British and other NATO public will infiltrate the faculty of the humanities departments of Russian universities.

At the lectures of such associate professors and professors, personalities will be formed who will create the Russia of the future. Hands will also reach pedagogical universities, where overly liberal scientists with big "Hirschs and Scopuses" will show future teachers how to bring up children and what to teach. With this approach, we will not need any notorious foreign agents for the collapse of the country, enough of our own.