LOMO under the microscope 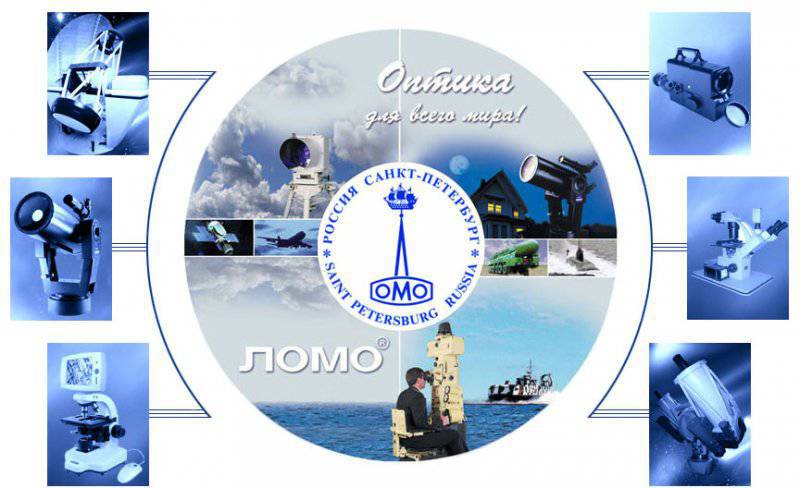 Rosbalt continues a series of publications on the current state of enterprises that were the pride of the Leningrad economy. Today we will speak about the Soviet industrial giant LOMO, which more successfully fit into the new economic realities. What is the mystery of such success?

Almost all analysts agree that LOMO - unlike the overwhelming majority of other giants of Leningrad industry - has quite successfully stepped from socialism to capitalism. However, the reasons for this are different. Here are the main ones from the list: skillful management, the use of administrative resources and, finally, trivial luck. No wonder: in the competition of industrial giants with a staff of several tens of thousands of people, luck plays an important role. Let's start with it.

Like other monsters of Leningrad industry, LOMO is an enterprise with pre-revolutionary roots. In just a year, on 2014, it will celebrate the 100 anniversary. It all started with optical-mechanical workshops engaged in the development and supply of artillery sights and detonator tubes for gun shells. In the Soviet period, an optical-mechanical plant arose on this basis. And in 60, an enterprise was merged with several others of the same profile into an association of optical-mechanical enterprises (from the year 1965 the Leningrad Optical-Mechanical Association).

At this time, LOMO is one of the main symbols of the Leningrad industry, 30 thousand employees work here, who receive very good salaries (even by union standards). And the reports about the main successes of this period sound good today. "1966 year: the beginning of serial production of lasers for scientific research. 1968 year: the first contact luminescent microscope was developed for intravital examination of human tissues. 1976 year: the world's largest Big Azimuth telescope was commissioned."

Recall that in Leningrad at that time there were several complete instrumentation chains at once, but it was LOMO that was the head company in optics. A little later this became his main success: optics at the turn of the 1990s turned out to be much more necessary tanks or warships.

“LOMO survived for two reasons,” says Lev. Savulkin, a senior researcher at the Leontief Center. “The main one is concentrating on the production of civilian products that were competitive. They supplied medical products (microscopes and endoscopes) to the foreign market, and so are lasers and night vision devices. "

Due to the peculiarities of the existing production facilities, LOMO was able to manufacture these products in the quantities and quality required by Western counterparties. The same Kirov plant simply did not have such opportunities.

Luck? Of course. But, of course, not only she.

Since 1992, LOMO has gone through several cycles of internal reforms and adaptations to new economic realities. Among other things, the company was able to successfully privatize, not giving the state any share in its share capital. But then, ONEXIM Bank, which became increasingly prominent and influential on the market, became a shareholder.

Reforms, of course, could not change the type of production itself. LOMO, in fact, turned out to be fragmented into several small companies, whose management received the right to make their own management decisions. And soon there was a division into "goats and sheep". The first (unprofitable) were closed, the second (respectively, profitable) focused on production, the demand for which was available not only in the domestic market (where would buyers have money in those years?), But also outside the country.

One problem: the whole complex of events resulted in more than threefold reduction of personnel. By the end of the stage of radical transformations, only 7 thousand people worked at LOMO. True, according to assurances from both the enterprise and external observers, the main thing - the production potential - was saved.

Far from every Petersburg director would be allowed, for example, to introduce into the shareholders of his plant several “offshores”, but not to take the state there. However, Ilya Klebanov it happened.

"Professional, energetic, courageous leading cadres are our national wealth. At least one name will be called - Klebanov, director of the Leningrad Optical Mechanical Association. He, like many others, had a hard time. After all, the factory had been focused on military production ... And nothing - the plant, as they say, floated. " These words in the summer of 1997 of the year were not uttered by anyone, but by President Boris Yeltsin. And not just anywhere, but in a weekly radio address to the nation.

At LOMO, Ilya Klebanov went through all the steps of the career ladder: from the design engineer and senior master of the optical shop to the director of the consumer goods complex and, finally, the general director. Perhaps the most significant was the stage with consumer goods: after all, Comrade Klebanov then moved to that chair in the second half of the 1980s, when there were almost no such people on the shelves of Soviet stores. Under the conditions of a wild commodity deficit, any tolerable goods were snapped up on the fly, and not taking advantage of this would be an obvious managerial sin.

Since January 1998, Ilya Klebanov has been the “economic” vice-governor in the government of Vladimir Yakovlev. Since May, 1999 is the vice-premier of the Russian government for the military-industrial complex. And since November 2003 is the plenipotentiary of the president in the North-West.

It is clear that in all the interviews both from the government and from LOMO all these years it was said that the new official does not allow any protectionism addressed to his production "alma mater". However, it is vital to correctly separate the concepts. Is it bad if an important state order is received by a company that has sufficient production capacity, the necessary human resources and capabilities to quickly and efficiently complete it? But on the other hand, in what situation are other developers of the country's factories?

In any case, since the beginning of 2000, most of the LOMO revenue has been generated by the state defense order, and "consumer goods" turn out to be less and less honored here.

According to official statistics, during the Soviet period LOMO worked in 20 scientific areas and produced 700 types of products (300 of them were serial, the rest - one-time). Since then, the number of types of products has halved (150 types of serial products and the same one-time). Today 2,5 thousand employees are employed here.

The company's revenue in 2011 amounted to 3,3 billion rubles, exceeding the level of 2010 of the year. The main products are microscopes and microvisors, endoscopes, observation instruments, instruments for monitoring meteorological conditions at airports, eye-safe lasers.

However, defense goods are considered especially pride here: "LOMO is the only Russian producer of homing heads for man-portable air defense systems, large-size optical-electronic systems for remote sensing of the Earth, and polarizing ultra-precise goniometric systems. In addition, in the framework of state defense procurement, a number of experimental tests are carried out "design work in the interests of the Navy, strategic missile forces." Defense products bring the company more than half of its revenue (over 1,7 billion rubles). Moreover, the main revenue growth is due to an increase in the share of export contracts.

Not surprisingly, civilian products "remain on the periphery." The most famous in this regard история with a camera "LOMO-compact", which for several years attracted the attention of many foreign amateur photographers to St. Petersburg.

At the beginning of the 1990-x, these cameras were already going to be removed from production, however, an unexpected thing happened: it seemed that an outdated unit found its fans in Western Europe. The media even talked about a new direction in photography - lomography, which, according to enthusiasts, captured up to half a million people. But in 2005, a message appeared on the company's official website that Compact is becoming a story. They say that production is unprofitable, modern technologies are conquering the market, and bad competitors are dumping. In return, they promised to create a new “digital lomographic camera,” which will be created — correctly — in China.

In general, the hippie end did not work.