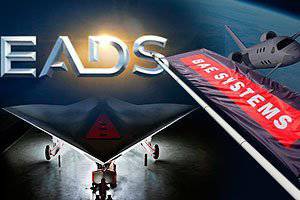 According to a statement by BAE Systems, in the new concern BAE Systems will receive 40% of the shares, and 60% of the shares will go to EADS. Negotiations should last in the coming days, a final decision will be announced on October 10. “The merger would produce an international concern with competencies in aviation, defense technology and security systems, with technology centers in France, Germany, Spain, the UK and the United States, ”BAE Systems told reporters. Meanwhile, according to the EADS press service, the final decision on the merger has not yet been made and "it can not yet be guaranteed that negotiations will lead to the transfer of shares."

Both European concerns have long been closely cooperating in the production of aerospace equipment. Thus, EADS and BAE Systems jointly produce the European combat aircraft Eurofighter Typhoon, which is in service with the Air Forces of Austria, Great Britain, Germany, Spain and Italy, as well as the Air Forces of Saudi Arabia. Also, both concerns are participating in the capital of the French company MBDA, which produces a wide range of missile weapons: EADS and BAE Systems own the 37,5% of the company's shares, the remaining 25% are owned by the Italian company Finmeccanica.

Concern EADS is in the joint Franco-German property. 22,36% of the shares of the concern belong to the French holding SOGEADE, controlled by the French government. Another 22,36% are in the hands of the German concern Daimler. The Spanish industrial holding SEPI owns the 5,44% concern group, the remaining 49,3% shares circulate freely in the market.

Meanwhile, the business profiles of concerns differ to a considerable extent. While the Airbus Civilian division brings 67% of the EADS turnover, the British military company BAE Systems brings over 90% of the turnover. Unlike Airbus, which focuses on aerospace products, BAE Systems is active in the field of land weapons, producing, in particular, M2 / M3 Bradley armored vehicles, M113 armored personnel carriers, Tanks Challenger II, as well as the M777 howitzer.

The merger with BAE Systems will help EADS to gain a foothold in the American market - today the British concern, which actively bought its American competitors in previous years (for example, United Defense, which produced armored vehicles, small weapon and precision munitions), has 47% turnover due to sales in the United States.