The first weapon of Homo sapiens. How did Cain kill Abel? 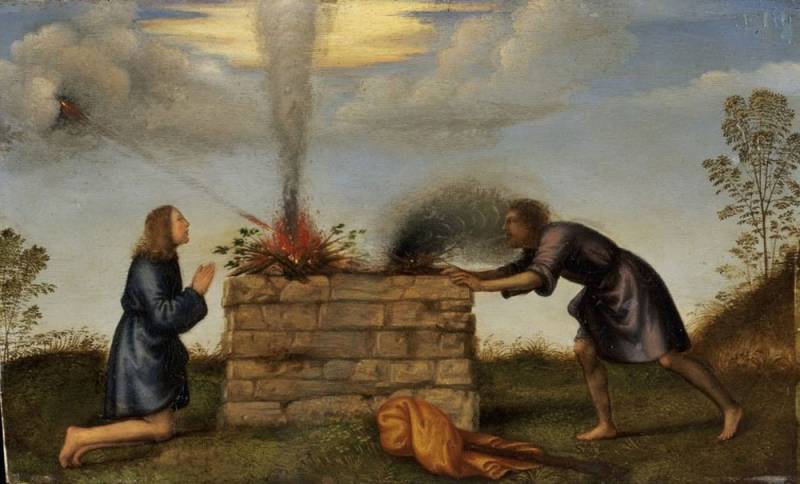 And Cain said to Abel his brother: [Let us go into the field]. And when they were in the field, Cain rose up against his brother Abel and killed him.
Genesis 4:8
History weapons. Everyone, even people who are absolutely non-believers, of course, know the biblical legend about the first murder on Earth. Describing what happened in legal terms of today, we can say that between the blood brothers Cain and Abel, on the basis of personal hostility caused by certain preferences received by Abel from the Lord God, he decided to kill him and, being with his brother in the field, fulfilled his plan ... This is how the first crime in the history of mankind was committed, connected with the murder of one person by another. But here's what's interesting: for some reason, in the Bible, which usually gives a lot of all kinds of details, the description of this event is extremely short. Moreover, it does not name the murder weapon, and this is very strange.

The fact is that other types of weapons of that time are mentioned in the Bible very often. For example, a knife is mentioned 5 times; sword 194; spear 34 times; bow 45 times; sling - 4; poleaxe - 3; club - only 1 time. That is, judging by the frequency of mentions of types of weapons in the text of the holy book, then it was the sword that was at that time the most popular and widely used weapon. 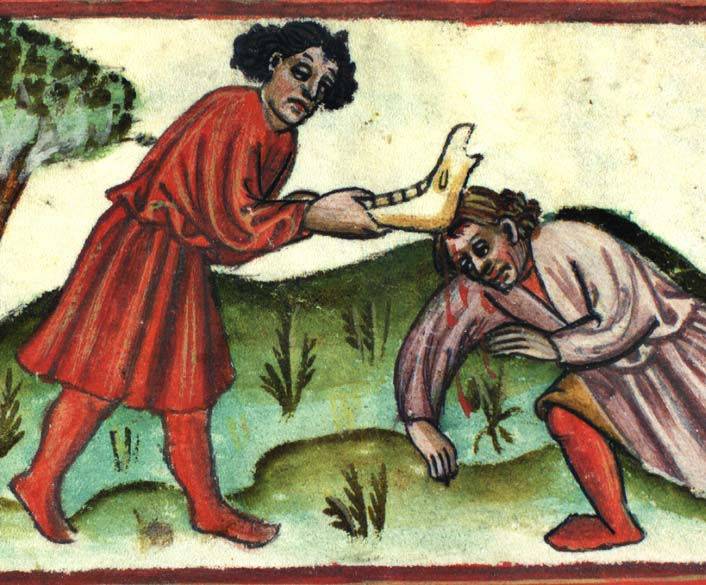 15th century miniature. Even then, people were preoccupied with finding out why Cain killed his brother Abel?
But could it be written that Abel was hacked to death with a sword? Probably not, because the sword is a warrior's weapon, and with whom could Cain fight at that time? That is, both brothers were peaceful people, which also follows from the description of their occupations - Abel is a shepherd, and Cain is a farmer. Further surprising: "And the Lord looked upon Abel and on his gift, but on Cain and on his gift he did not look. Cain was greatly upset, and his face drooped". Why would God have such a favor to one of the brothers and a negative attitude towards the other? That is, the Lord himself provoked this conflict, which might not have flared up if his attitude towards the brothers were the same. 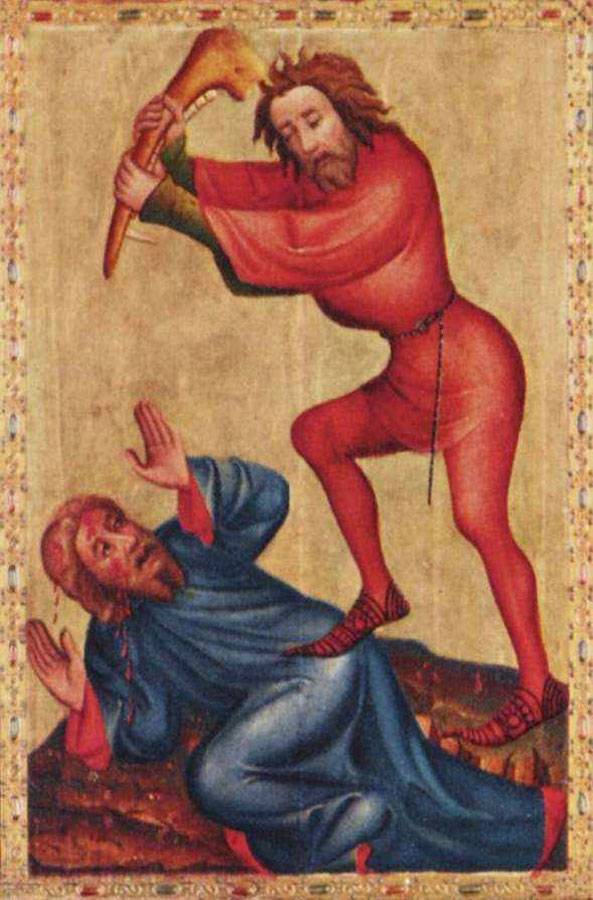 Cain and Abel. "Master Bertram". Grabovsky altar from 1379, made for the church of St. Peter in Hamburg (now it is in the Kunsthalle in Hamburg)
But let us not blame the Lord, for his ways are inscrutable, and what he wanted to achieve by committing such an injustice, we will never know. Unless he penetrated into the soul of Cain, saw that he was a "bad man" and decided to finally make sure of this, leaving him a little free will, which he used for ... murder. 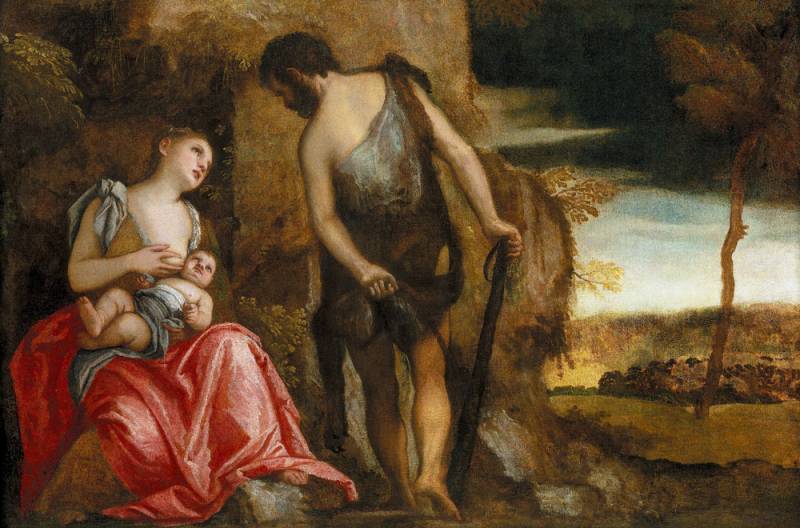 Cain and His Family, 1585 by Paolo Veronese (1528-1588). Here he has a heavy club in his hand ...
In this case, we are more interested in the question of the weapon with which this murder was committed. If this is not a sword, not a spear, and not a club, then how else can you kill a person in the field, moreover, a shepherd, that is, a person accustomed to physical labor? Firstly, Cain, having rebelled against Abel, could get up from the ground where they both were sitting, take a stone in his hand and ... take his brother's life with a blow to the temple. So, the first contender for the murder weapon is an ordinary stone. 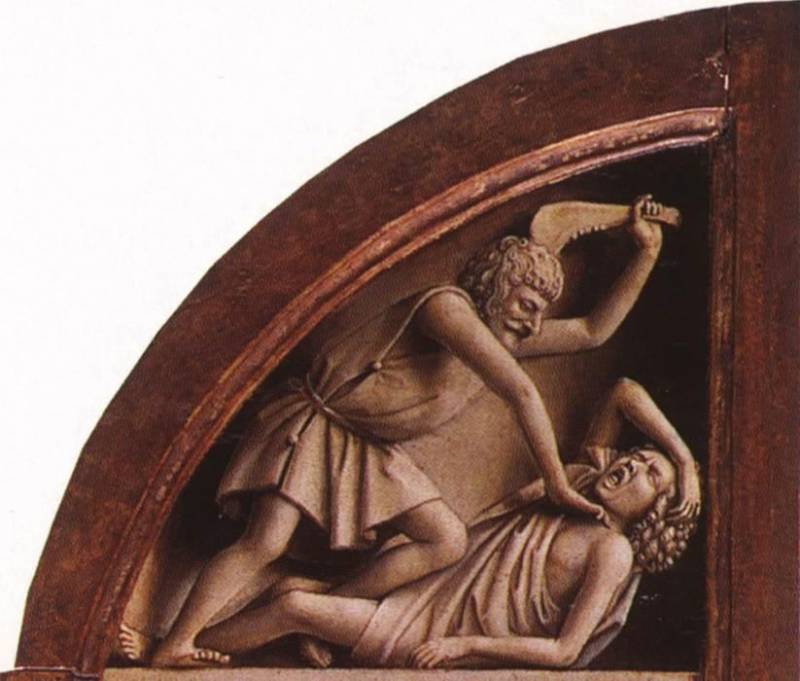 Panel of the Ghent Altarpiece, 1432 Jan van Eyck (c. 1385-1441)
Both the one and the other could walk with a staff. This was customary in primitive societies. With a staff in hand, young David goes to battle with Goliath. By the way, the word "staff" occurs in the Bible 6 times. So not only the shepherd Abel could have the staff, but also the evil envious Cain, who could well have started it only because Abel had it, but he, Cain, did not! And so he beat him with a staff! 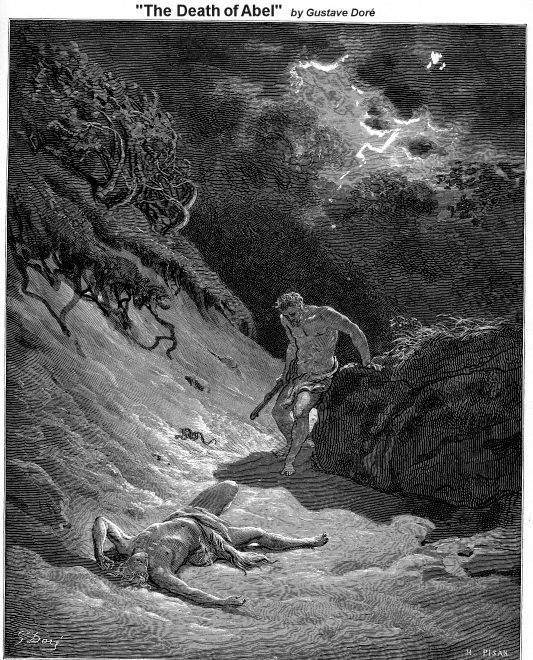 Classics of the genre: "The Bible by Gustave Dore in illustrations"
Or maybe stabbed to death with a knife? The knife could, most likely, be just with Abel. After all, he was the shepherd, not Cain. 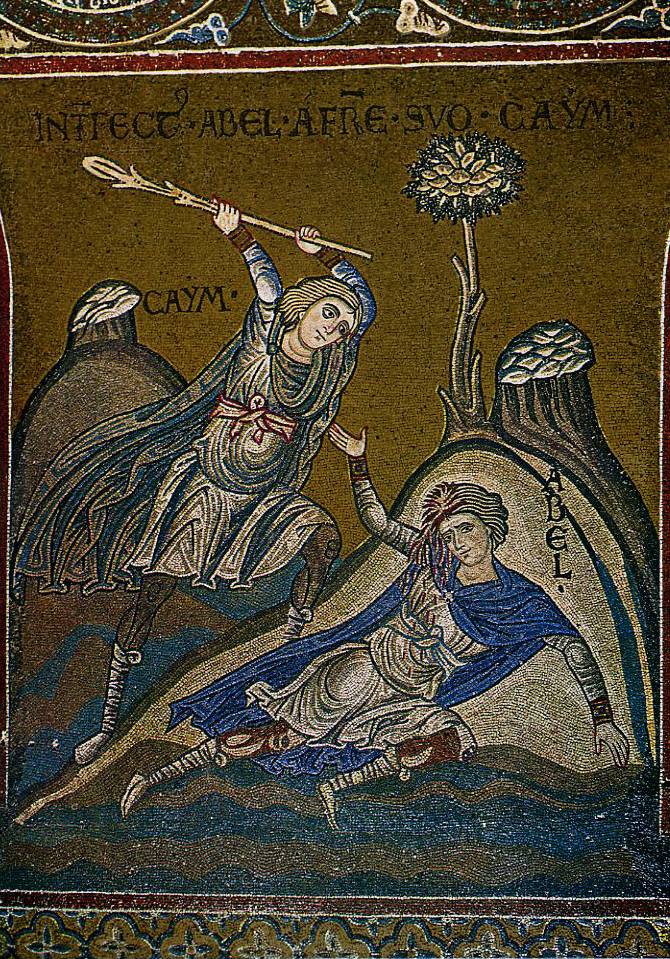 One of the earliest depictions of the scene "Cain kills Abel", mosaic of the main nave of the Cathedral of the Nativity of the Blessed Virgin Mary in Montreal, between 1183 and 1189, Sicily, Italy
Did he beat him with a truncheon or just strangle him? It is also quite possible, but ... not proven!

That is, the question of how Cain killed Abel remains open for thousands of years. But people constantly tried to give an answer to it, and first of all they were artists, people creative and with imagination. Let's return once again to the conversation about the direct weapon of this murder. The Bible describes this episode with just one phrase: “And when they were in the field, Cain rebelled against his brother Abel and killed him". Therefore, the artists were completely free to choose any weapon, conceiving the composition of their paintings. And here's what is interesting: nowhere, in any of the paintings or anywhere else, Cain does not kill his brother with his bare hands - the artist necessarily draws some object, in addition, Baroque artists usually depicted the brothers naked. Well, yes - they wanted to show the beauty of the human body. But, most likely, they wanted by this to emphasize the antiquity of what was happening, and that Abel and Cain belonged to primitive creatures who had just begun to use some kind of tools. 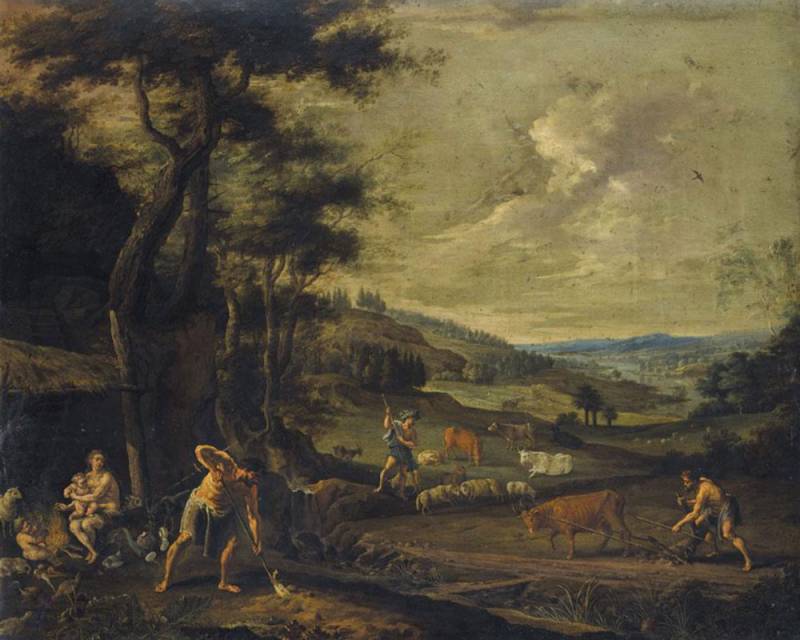 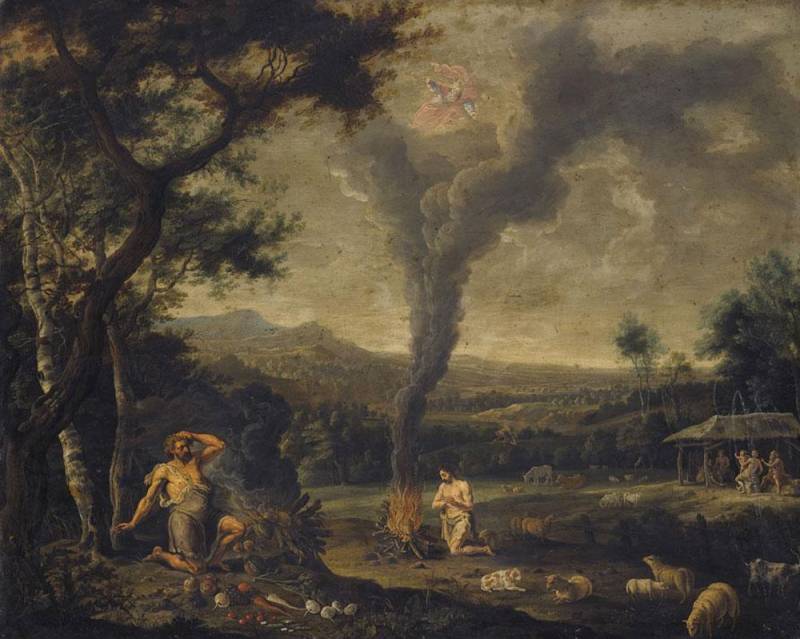 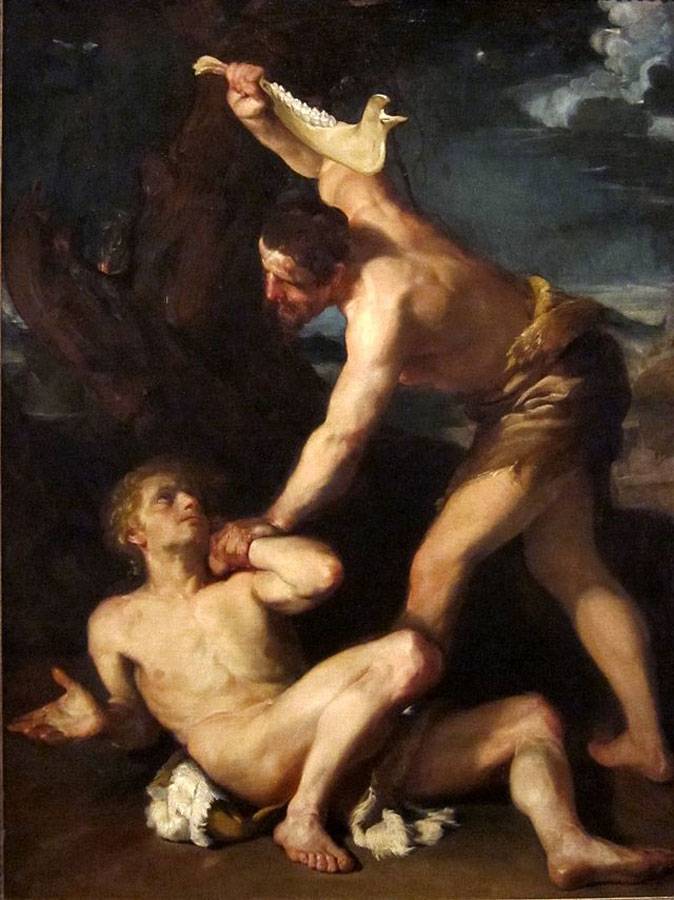 "Cain kills Abel", 1760-1780 Gaetano Gandolfi (1734-1802)
It is interesting that the jaw, as the instrument of Cain's murder of Abel, was mentioned in religious books. Although it is difficult to imagine how this can be written beyond what is written in the Bible ?! But there is, for example, a very early literary source where the jawbone of a donkey is the instrument of this murder - a commentary from the XNUMXth century AD. to the book of Genesis "The Canterbury School of Theodore and Hadrian." Later, this story about the jaw began to appear in many Christian commentaries on the Bible and collections of legends, which, of course, looks pretty ... stupid. For who of the people who lived then could boast of having received a revelation from God, and even on such an important issue. Although ... "special" people have always been. 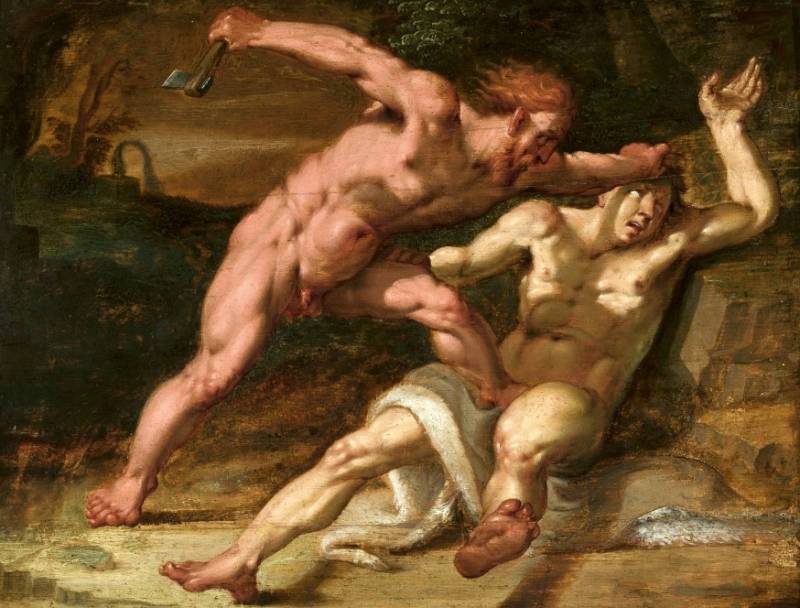 Abraham Bloomart (1564-1651), 1590s
However, the people of the New Age quite early got acquainted with Hesiod's poem "Works and Days" and could well have learned from it the idea of ​​successive centuries: gold, silver, copper and iron.

They had copper armor and copper dwellings,
Copper work done: no one knew about the iron. (Hesiod. Works and days) 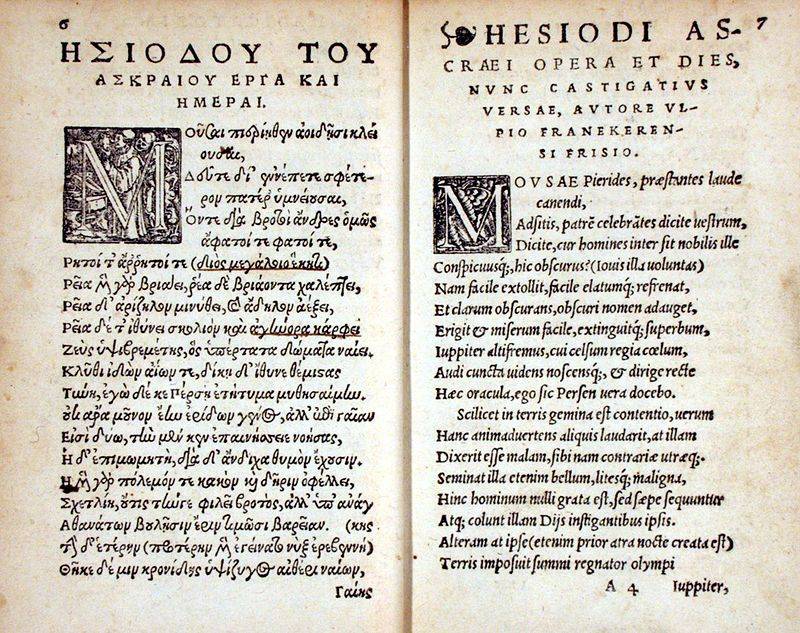 The first page of the edition of "Works and Days" in ancient Greek with a parallel Latin translation. Basel, 1539
«There will be no more love between brothers, as it once happened"- Hesiod writes about the people of the Iron Age, but ... he does not speak anywhere about tools made of stone. That is, the stone tools were unfamiliar to him, just as they were unfamiliar to later painters. Therefore, in art canvases, we do not find images of Cain killing Abel with a stone ax. But the primitivism of their existence was already felt by them quite clearly and, whenever possible, they were emphasized by the depiction of the most primitive instruments of murder! 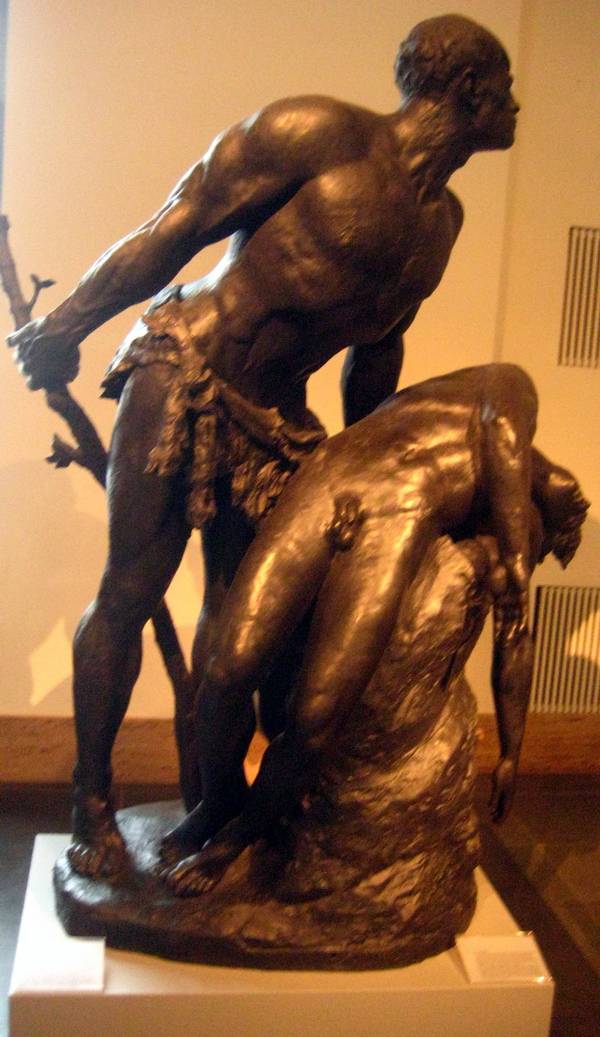 Cain and Abel. Reynold Begas (1831-1911), bronze, 1895 German Historical Museum
The most common, judging by the paintings of the masters of the 16-17 centuries, were the club and the jaw of a donkey, since it is mentioned in the text of the Bible as a weapon of Samson, who beat the Philistines with it. That is, it is obvious that the artists familiar with this passage from the Bible believed that if Samson used the jaw of a donkey, then ... what prevented Cain from using it? Whether this is true or not, whether this judgment is true or wrong, it is impossible to say now, but the fact that the donkey's jaw in the hands of Cain is found in the paintings even more often than the club is undoubtedly. 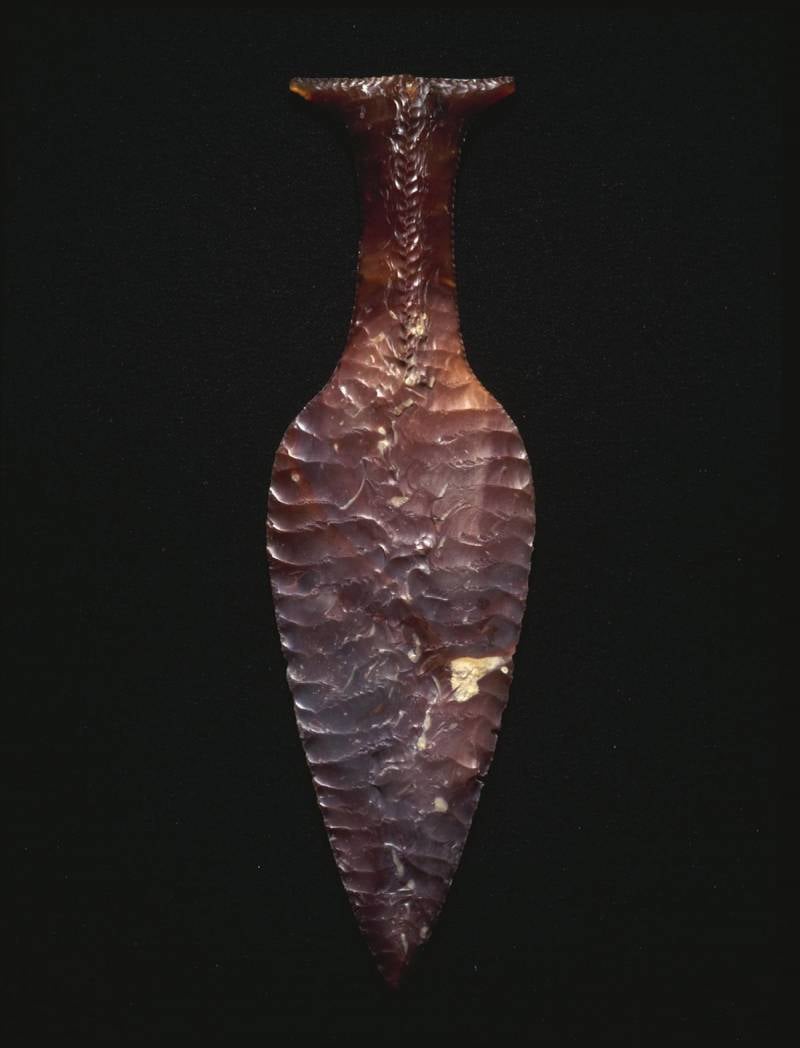 Flint dagger from Hindsgawl. Found in 1876 in the Hindshavl district, it is a national treasure of Denmark and is recognized as one of the finest examples of stone weapons ever made by human hands. Made of pink flint. The length is about 30 cm, the thickness is less than a centimeter in the blade part. Depicted on the 100 CZK Danish banknote. National Museum of Denmark, Copenhagen
It is interesting that modern artists are not interested in biblical subjects. It's a pity! One can imagine a whole series of paintings masterfully depicting the human bodies of Cain and Abel, and different options for killing the latter. On one of the canvases, he kills his brother with a stone, on the other, he cunningly strangles him from the back, on the third, he hammers him with a staff, on the fourth ... he snatches a flint dagger typical of the Stone Age and plunges it into Abel's chest. 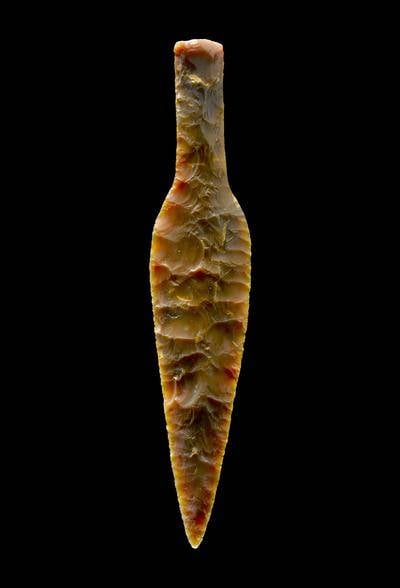 You can give Cain in his hand and such a dagger, simpler. Also found in Denmark. National Museum of Denmark, Copenhagen
Why not use the sharp horn of an antelope or a mountain goat? In the era of primitive tools of labor, this could well have been. And it would be quite possible to dress both of them in clothes made of skins, similar to the clothes of the heroes of the movie "Million Years BC". 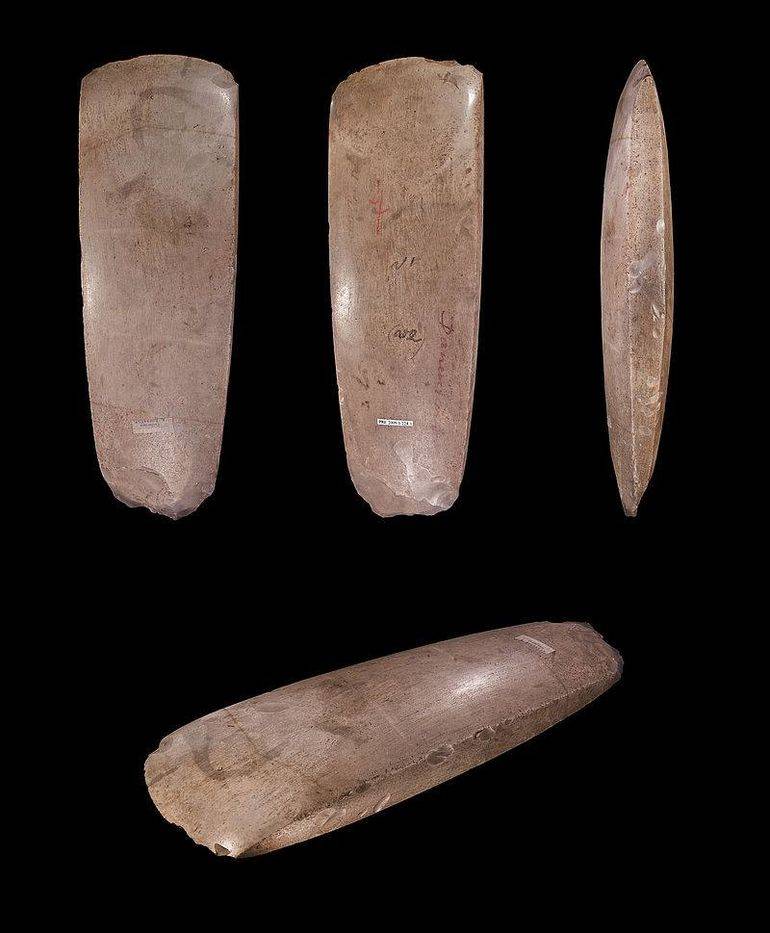 Stone axes (they are also suitable for hoes!) Of the end of the Neolithic era, approx. 3000-1800 biennium BC. Toulouse Museum, France
Moreover, if we are talking about the tools of labor of exactly two brothers, then let, say, both of them be with copper or bronze knives, dressed in coarse-wooled tunics and ... one with a shepherd's staff, but the other ... with a stone hoe on a long wooden handle ! For what kind of agriculture could there have been? Hoe! Here Cain scored his brother with a peasant hoe! Whether it was so or not, the picture - if, of course, the artist tries, it can turn out to be simply amazing in all respects.