13 September 2012
23
The article is posted on the rights of information cooperation. 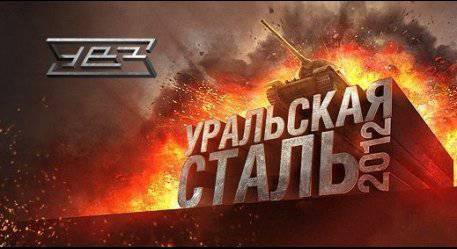 105 cybersportsmen will converge in the final battle in Moscow for the title of the best virtual tank crews of the year.

13 September 2012 - Wargaming, one of the world's largest developers and publishers in the free-to-play MMO market, announced that the final battles of the Urals Steel 2012 International Championship will be held in Russia 16 September 2012. The decisive battle of virtual tankers will take place in Moscow, where participants and guests of the championship are not only waiting for the hot final fights, but also a rich entertainment program and, of course, the opportunity to play World of Tanks.

For one day, the CSKA Universal Sports Complex will become a virtual battlefield where 15 of the strongest teams from Russia, the European Union, North America, China and Japan will fight for an impressive prize pool of 77 000 US dollars, as well as for the right to bear the honorary title of world champions World of Tanks.

For the first time, tankers from the Asian region will lead their steel cars to the final battlefields.

"It is a great honor for us to participate in a tournament with top players, and for the first time to represent China in such a large-scale World of Tanks tournament," says the Chinese Devil Team player.

The format of Ural Steel has undergone some changes: this year the final games will be held in only one division.

“The European teams are definitely good - they have a lot of practice playing ESL and Wargaming tournaments,” said a representative of the Polish 1st PAD Expendables team. - The playing style of the Russian teams is quite aggressive and risky, with the active use of French tanks. But the game of squads from China and Southeast Asia combines caution and harmonious interaction within the team. ”

“This will be a grand tank festival for players from around the world,” comments Alexey Kuznetsov, head of e-sports at Wargaming. “We hope that neither sportsmen, nor spectators will not be disappointed!”

This year, Ural Steel will be held on an even larger scale, which means there will be more pleasant surprises. A rich entertainment program awaits the guests of the Superfinal: interesting contests, a visit to the museum of military equipment, field cuisine dishes.

The event will be held at the Universal Sports Complex CSKA them. AND I. Gomelsky address: Moscow, Leningradsky Avenue, 39, building 3.
Ural Steel is the largest e-sports competition in World of Tanks, bringing together professional players from around the world.

The international tournament Urals Steel 2012 was organized by the Federation of Computer Sports of Russia with the support of Wargaming. Uralvagonzavod, Russia's largest research and production corporation, the world's leading manufacturer of main battle tanks, was the general sponsor of the event. The general partner of the championship, the Russian company Citylink, is a reliable and dynamic partner in popularizing modern technologies of service, entertainment and shopping in Russia.

Wargaming is one of the world's largest publishers and developers in the free-to-play MMO market. The company was founded in 1998, and during that time managed to turn from a group of enthusiasts into an international corporation with more than 1000 employees and has released about 15 games.
Currently, Wargaming is working on a military series of MMO games dedicated to tank, air and sea battles of the mid-20th century. The company's flagship project, tank action World of Tanks, managed to win numerous awards from the leading gaming publications and become one of the most successful MMO projects. Air World of Warplanes is on the list of the most anticipated releases of the 2012 of the year. dedicated to warships, scheduled for 2013 year.