52-th anniversary of the creation of OPEC 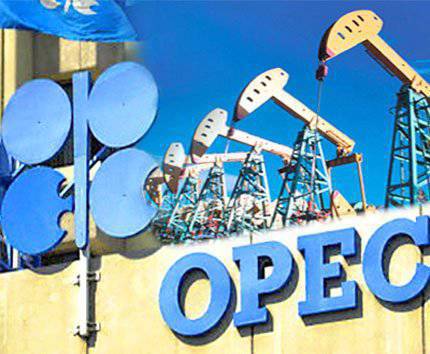 To your court, my friends are putting up another article this time on the creation and development of a cartel called OPEC.

These days, 10-14 September, but in 1960, in Baghdad, the main suppliers of oil to the world market - Venezuela, Iraq, Iran, Kuwait and Saudi Arabia - founded the Organization of Petroleum Exporting Countries (OPEC). English The Organization of Petroleum Exporting Countries; OPEC abbreviated. OPEC) - an international intergovernmental organization or in other words a cartel. OPEC was registered with the United Nations 6 September 1962 of the year (UN resolution No. 6363). Initially, the OPEC headquarters was in Geneva (Switzerland), but then moved to Vienna (Austria). The initiator of the creation of the organization was Venezuela - the most developed of oil-producing countries, which for a long time was subjected to the exploitation of oil monopolies. The reason for the creation of OPEC and the direct impulse that led to the creation of the oil exporters association was another reference price reduction in 1959 year after the Seven Sisters was a cartel that united British Petroleum, Chevron, Exxon, Gulf, Mobil, Royal Dutch, Shell and Texaco, which controlled the refining of crude oil and the sale of petroleum products all over the world, unilaterally lowered the purchase prices of oil, on the basis of which they paid taxes and interest for the right to develop natural resources in oil-producing countries, and the introduction was limited d of oil imports to the United States.

The Cartel countries also established the OPEC Fund for International Development (a kind of stabilization and prospects for innovative development), which, like the headquarters, is located in Vienna (Austria). The official language is English. Currently, the Libyan Al Badri is the Secretary General.

2. OPEC's main goals
2.1. Coordination and unification of the oil policies of the Member States.
2.2 Identify the most effective individual and collective means of protecting their interests.
2.3 Ensuring price stability in world oil markets.
2.4 Attention to the interests of oil producing countries and the need to ensure:

3. OPEC structure
The structure of OPEC consists of the Conference, committees, the Board of Governors, the Secretariat, the Secretary General and the Economic Commission of OPEC. The supreme body of OPEC is the Conference, consisting of delegations (up to two delegates, advisers, observers) representing member states. The conference is held by the secretary general, the highest representative person of the cartel. Usually the delegations are headed by the ministers of oil, mining and energy. Each delegation has one vote. The consensus at the conference is reached by a majority vote.
Meetings are held twice a year, usually at headquarters in Vienna.

4. OPEC quota
OPEC countries have now agreed to maintain the quota at the level of 30 million barrels per day.

5. OPEC Immunity
OPEC is exempted from any form of court proceedings. It is not subject to requisition, confiscation and expropriation either administratively or judicially. OPEC archives enjoy immunity wherever they are.

6. A brief excursus
In the 1960s, there was an excess supply of oil on world markets, and the purpose of creating OPEC was to prevent further price drops. However, in the 1970s, a sharp increase in world oil demand has allowed producing countries to significantly increase their sales revenues, especially by increasing world oil prices four times in 1973-1974 and another two times in 1979. OPEC looked strong in the 1970s, when oil demand remained high, and soaring prices brought huge profits to giant oil companies and dramatically increased the value of their oil reserves. However, OPEC’s weakness was fully manifested at the beginning of the 1980s, when, as a result of the full-scale development of new oil fields outside OPEC countries, the widespread introduction of energy-saving technologies and economic stagnation, the demand for imported oil in industrialized countries dropped sharply, and prices fell by almost half . The main disadvantage of OPEC is that it brings together countries whose interests are often opposed. Saudi Arabia and other countries of the Arabian Peninsula are sparsely populated, but they have huge oil reserves, large investments from abroad, and maintain very close relations with the "Seven Sisters". Other OPEC countries, such as Nigeria, are characterized by high population and poverty, they implement expensive economic development programs and are heavily indebted. These countries are forced to produce and sell as much oil as possible, especially after the prices of crude oil have decreased. In addition, in 1980-ies, Iraq and Iran brought the oil production to the maximum level to pay for military expenses. In 1990, Iraq invaded Kuwait and instigated the Persian Gulf War (1990-1991). After the defeat of Iraq, international trade sanctions were applied to it, which sharply limited Iraq’s ability to export oil and led to even greater price volatility in raw materials exported from OPEC countries. Despite the constant overproduction of oil in most OPEC countries and increased competition from other oil-producing countries, oil prices throughout 1990's remained relatively stable compared to the fluctuations they experienced in 1980's. Moreover, in the spring of 1999 there was a revival of the oil market; oil prices for the first time in a long time went up. The main reason for the change in the trend was OPEC initiatives to reduce oil production, supported by a number of other oil-producing countries. In general, there was an increase in oil production with a parallel increase in oil prices. The financial crisis of 2000 did not significantly affect production and price.

7. OPEC value
Despite the enormous impact on the oil market, OPEC produces only about 40% (recent data) from the volumes of world oil production. However, OPEC countries own 77% of all proven world oil reserves. As a result, non-OPEC countries, in particular, Canada, Great Britain, Norway, Mexico, China, Russia and the United States, produce about 60% of oil, but at the same time their own reserves are quickly depleted. As a result, in recent decades, there has been an ever sharper need for the development of alternative energy sources.

8.Russia and OPEC
Today the most important issue of the world economy is the global increase in oil prices. Oil will remain the most important primary energy source in the world for the next 20-30 years. And although Russia has been participating in OPEC as an observer since 1998, OPEC and Russia are inextricably linked with one common goal - to stabilize hydrocarbon prices on the world market. Unacceptable high prices are not beneficial to anyone. They undermine the sustainability of the global economy. And ultimately they will have a negative effect on manufacturers. Russia pays considerable attention to the situation in the oil markets not only in contacts with OPEC countries, but also in cooperation with the main consumer countries. For Russia, it is, above all, European countries (about 90 percent of oil exports) and, most recently, China. To cope with dependence on energy exports, Russia still does not allow not only the constant increase in gold and foreign exchange reserves of the Central Bank, but also the presence of the Stabilization Fund.

9. Oil production trends
Because of the UN sanctions, Russia and Iraq for the first time in 20 have bypassed Iran in the production and export of oil. In general, the OPEC countries compensate for the lack of Iranian oil in the world.

Conclusions:
All OPEC countries are deeply dependent on the revenues of their oil industry. Perhaps the only country that represents the exception is Indonesia, which receives substantial revenues from tourism, forests, gas sales and other raw materials. For the rest of OPEC, the level of dependence on oil exports varies from the lowest - 48 percent in the case of the United Arab Emirates to 97 percent in Nigeria. From this it follows that without a foreign market, there is no point in talking about the development of OPEC countries. Exports of raw materials, being the main source of income for countries, "pulls" for themselves and the domestic economy. It follows from this that the economy of the cartel member countries directly depends on world prices for hydrocarbon raw materials.