Features of the military reform of Nikita Khrushchev 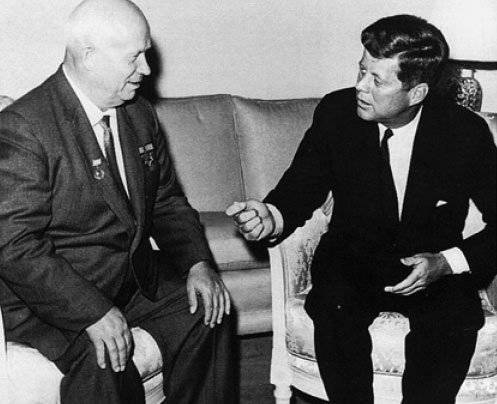 It is known that the reform of one of the main institutions of the Russian state, its Armed Forces, as a rule, took place either after suffering defeats in wars, or after another change of state or power in the country. So from stories Russia knows at least five of the largest-scale reforms of the state’s military machine. All of them were carried out in the period from 1550 to 1960: this was under Ivan IV (Grozny), Peter the Great, Alexander II and already in the USSR, reforms carried out by Mikhail Frunze and Nikita Khrushchev. Of all these reforms, the military reform of Nikita Khrushchev, which he carried out in the 50s - the beginning of the 60s - continues to be of some controversy.


This reform was remembered by many, first of all, by large-scale reductions in personnel in the army and navyas many eyewitnesses of that time recall, “they cut it as if alive.” So, in 1955-1958, even under the Minister of Defense Zhukov, Khrushchev initiated the first reduction of the Soviet Armed Forces by a third, and this is almost 2 (according to other sources, 140 million 2 thousand) of soldiers and officers. Then, in January 100, the Supreme Soviet of the USSR without discussion approved the Law "On a New Significant Reduction in the Armed Forces of the USSR". Up to 1960 million 1 thousand (according to other sources for 300 million 1 thousand) soldiers and officers were dismissed from the army and navy, which is almost a third of the total number of all military personnel in the USSR by that time.

It is still not clear why it was necessary to carry out such large-scale events without any calculations and preparation, and in such a short time? Yes, it has long been clear that actually maintaining the army in the wartime states of the USSR could no longer continue (on 1 in March 1953, the USSR Armed Forces numbered 5. 396. 038 people (over five million people). Yes, it was clear that that urgent modernization of the entire military machine of the state is necessary, but the servicemen, who were then fired or, in other words, were thrown into the street without pensions, did not really think of housing and work.

The very first stage of the cuts was the most painful, when in less than three years more than 2 million people were fired from the army and navy, a huge figure, together with their families, these cuts affected the fate of millions of Soviet people. Not only military schools, various repair, industrial enterprises, but also the real deployed combat units and warships were reduced. The rampant demobilization caused discontent among the most loyal and class-conscious category of Soviet citizens, in the officer corps itself. Often, many officers were dismissed even without pensions, there were those with pensions who went through the whole war, but they could not find a job by themselves.

In the Central Committee there were reports of the seriousness of the situation with demobilized officers. So, for example, in June 1956 of the Central Committee of the CPSU informed Marshal I. Konev, "in the Odessa region.. Still not employed 329 officers dismissed from the army last year, of whom 120 people are not entitled to a pension" not improved even two years later.

The KGB reported to the “authority” that when writing letters from servicemen of the Transbaikalian military district in just one week — from 10 to 17 in February of 1958 — more than a hundred letters from officers were found that contained the condemnation of the reduction of the armed forces and how it happened. Here is one of the most typical letters: “For some time now we are under the fear of these events, but now this campaign has not passed us. Our division will be disbanded. From our regiment (according to rumors) only 5 people will remain, that is, almost everyone will be fired to the reserve ... We have to say that we are dressed and shod, but you would see how our officers are demobilized who have 2-3 children, no clothes, no money, nothing, and they are dismissed without a pension, 1,5 is not enough -2 years. The mood of all is terrible. Now it’s just a total demobilization. Why this? ”(Http://www.kprf.org/sho wthread.php? t = 7023).

On the other hand, it was clear to the country's leadership that the time had passed by the millions of armies and colossal battleships in modern conditions, and the next technical revolution was in full swing all over the world. The term Khrushchev's favorite, the nuclear missile shield, was firmly in use. The first under the press of reforms Nikita Sergeevich launched the Navy, where priority in the development of the Navy was given to missile-carrying submarines. As a result, many cruisers and battleships, even just built or still under construction, had to be disposed of. By order of this participation of the USSR Council of Ministers 25 March 1958 years divided 240 ships, including 6 destroyers, 12 submarines, 7 landing ships, 30 minesweepers, 89 torpedo boats, battleships project 24, heavy cruisers 82 project teams of all These warships, of course, were demobilized and sent to work in the national economy. However, it is worth noting one, but a very important point, and they demolished the old, but at the same time, the newest weapon systems were being created at the same time, so only for the period from 1956 to 1960 the domestic Navy replenished the 1863 of the new ship.

Already by the 1961, the Navy had nine nuclear submarines. The five-year program “On the creation of ships with new types of weapons and power plants for 1956–1962 ”and“ The program for the construction of ships of the Navy for 1959–1965 ”The missile armament, marine developed and developed on ships throughout aviation everything was also re-equipped, switched to missile systems, Nikita Sergeyevich, as if feeling his early resignation, was in a hurry to designers with the introduction of more and more new weapons. Thus, by the end of 1964, the domestic fleet already had 46 nuclear submarines (including 8 - with ballistic missiles, 19 - with anti-ship missiles) and 325 diesel submarines, as well as 150 missile boats.

It is also interesting that Khrushchev, being a man far from science, all sorts of innovations, etc., nevertheless, with his natural instinct managed to correctly identify the main directions in the country's defensive strategy. It is also possible that Khrushchev was just lucky with the entourage at that time dealing with military technical issues. In addition to nuclear submarine forces, Nikita Sergeyevich also had land rocket troops in favor, it was under him that various ground-based missile systems were tactical, operational-tactical, medium-range, and finally strategic (intercontinental). The latter two types later became part of the Strategic Missile Forces (RVSN), created by decision of the USSR Council of Ministers in December 1959, based on the missile units and formations of the Ground Forces and the Air Force. The Strategic Missile Forces have become a type of the Armed Forces of permanent readiness, equipped with modern combat control systems. Having such nuclear missiles in hand, Khrushchev began to talk on an equal footing with the Americans, and after the Cuban crisis the whole world realized that now only two countries of the USSR and the USA are deciding their fate.

The Ground Forces were also actively reforming, the number of towed barreled artillery was significantly reduced in them, thousands of guns were sent to storage bases, rearmament, saturation of formations and units with rocketry and self-propelled artillery took place. As part of the SV, a new type of troops was created - missile forces and artillery. Motorization of the NE increased, infantry units and formations are history, new motorized infantry units with a large number of tanks and armored personnel carriers (BTRs), the infantryman has now become a motorized rifle. Under Khrushchev, the new generation T-55 and T-62 tanks with weapon stabilizers, night vision devices, automatic anti-nuclear and fire protection systems, etc. were adopted. The combat training also underwent significant changes, the troops were now trained to act in conditions of the use of weapons of mass destruction. Everywhere various innovations were introduced, the infantryman with a rifle was replaced by a soldier in the OZK, and the aviator in a leather helmet was replaced by a pilot in equipment almost like that of an astronaut.

In 1958, the resolution of the Central Committee of the CPSU and the Council of Ministers on the start of work on the creation of the Moscow anti-missile defense system А-35 (built and tested in 1977, was adopted, in the 1978, the modernized A-35М system was adopted). In the second half of 1950, the development of the first station of the missile attack warning system began, and in November 1962 was given the task to create 10 of such stations. The first set of missiles placed on combat duty in 1971 year. At the same time, the domestic defense industry began to develop a space detection system for the launch of ballistic missiles from US missile bases. The transformations carried out led to the widespread introduction into the troops of computers, automated control systems, radio engineering equipment, new reconnaissance equipment, communications of other high-tech weapons and military equipment.

During the reign of Khrushchev, the West finally stopped flying its reconnaissance aircraft over the territory of the USSR, since the new Soviet air defense system showed its effectiveness in practice. To create and deploy the above complex systems, the most important branches of the defense industry, radio electronics, rocket technology, automated control systems, communications and data transmission were created from the ground up, hundreds of laboratories and design bureaus were formed, and so the country spent billions of people of money. Maybe all this was done in vain then, and all the funds needed to be simply channeled to the development of the light or food industries so that the common people could not stand in line for food and other elementary attributes of bourgeois life? And in general, can Nikita Khrushchev’s military reform be called one of the most successful in the history of the Russian state ...