The Battle of Manila Bay: How Did the Spanish Squadron Sink?

October 18 2021
6
History knows many cases when countries located on different continents declared war on each other. If the opponents are separated by oceans, and the distances are measured in thousands of kilometers, the entire responsibility falls on the navy.


So, in 1898, a war broke out between Spain and the United States. The reason for it was an explosion on the armored cruiser Maine during a mission to resolve the conflict in Cuba. The main theaters of military operations were Cuba itself and the Philippines.

Although the latter did not receive much attention, a notable naval battle took place there. In it, the Americans managed to win a decisive victory, destroying the enemy squadron with minimal losses. 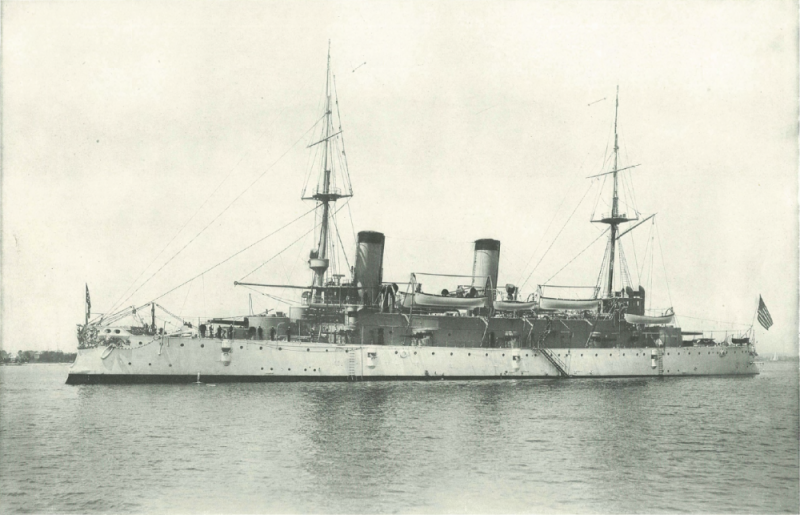 Commodore Dewey's flagship - armored cruiser Olympia
Due to the great distance from the metropolis, neither Spain nor the United States kept large military formations in the western Pacific. The Spanish fleet consisted of 12 ships, of which only 7 were ready for sea battle. The flagship was Reina Cristina: a cruiser with no armor, but with the most powerful artillery in the squadron - 6 160mm guns. In addition to him, there were 3 more armored cruisers Castilla, Don Juan de Austria and Don Antonio de Ulloa, and 2 small armored cruisers Isla de Luzon and Isla de Cuba. Of the 5 gunboats, only the Marques del Duero remained operational, while the rest were removed from their weapons to strengthen the coastal batteries. The command was carried out by Rear Admiral Patricio Montejo-Passarón.

The American squadron closest to the Philippines under the command of Commodore George Dewey was at that time in Hong Kong. It included the armored cruisers Olympia, Baltimore, Boston and Raleigh, as well as the seaworthy gunboats Concord and Petrel. The first 3 cruisers were armed with 203-mm main battery guns, which already gave an advantage over the Spaniards. The rest of the ships had 152-mm artillery on board. Despite the clear superiority in firepower and speed, the American squadron also had its weaknesses: due to the remoteness from its bases, the supply and maintenance of ships was greatly hampered. In addition, the cruisers were not suitable for fighting well-fortified coastal forts, since they did not have strong armor. Nevertheless, Commodore Dewey was ready to immediately go to sea and attack the Spaniards in Manila.

With the declaration of war, both sides took action. The American squadron headed for Manila, and the Spaniards prepared to meet them. Admiral Montejo led his ships to Cavite, which was protected by just a couple of artillery batteries. The admiral understood that it would not be possible to save the squadron, and tried to minimize losses. 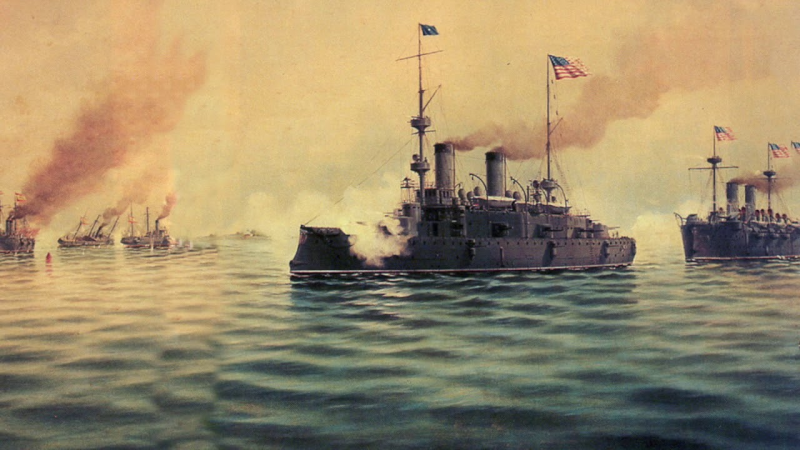 Painting "Battle of Cavite"
On the evening of April 30, Commodore Dewey's squadron approached Manila. Under cover of darkness, the ships entered the bay at low speed. After midnight they were spotted from one of the coastal batteries. The opponents exchanged several volleys, but to no avail. Towards dawn, the Americans approached Manila. Quickly determining that there were only merchant ships in the harbor, Dewey headed for Cavite, where the Spanish squadron was located. At about 5 a.m. on May 1, both squadrons established visual contact. The Spaniards opened fire from the utmost distance, while the Americans responded only 20 minutes later. Lined up, the ships were ready to engage.

The signal to open fire was a shot from a 203 mm gun from Olympia. A little later, the rest of the artillery joined him. After a couple of miles, the American squadron made a U-turn and was now firing from the other side. In total, the Dewey ships made 5 such maneuvers, gradually reducing the distance to a mile. Don Juan de Austria was forced to withdraw from the battle, and the Americans concentrated their fire on the largest Spanish ships. Castilla was soon incapacitated. The cruiser, which had lost control, was already engulfed in fire when it was turned towards the Americans by the side from which the guns were removed. The ship's crew transferred to the departing Don Juan. The flagship of the Spaniards, Reina Cristina, moved towards the enemies. But the ship underwent a hurricane of shelling, which caused monstrous damage: the wheelhouse and the captain's bridge were demolished, fires blazed everywhere, and among the gun servants there were many killed and wounded. At about 7:30 am, Dewey ordered a ceasefire following a report on the depletion of ammunition. There was silence for a while.

Admiral Montejo left the sinking flagship. He moved to the Isla de Cuba and began to prepare the remaining ships in the ranks for a new battle. In turn, Dewey, realizing that the report on the depleted ammunition was erroneous, decided to finally destroy the Spanish squadron. He divided his ships as follows: gunboats went south for reconnaissance, the cruiser Raleigh was to enter the bay, Olympia and Boston covered him, and Baltimore went out to intercept the merchant ship.

The cruiser Don Antonio de Ulloa became the first target of the Americans. Despite attempts to shoot back, the Spanish ship was soon finished off and abandoned by the team. Meanwhile, the Baltimore came under fire from coastal batteries. One of the shells hit the ship, knocking out the gun and wounding 9 people. Having quickly identified the "blind zone" of the fort, the Americans began to bombard it.

Soon the gunboat Petrel found the rest of the enemy squadron beyond the peninsula. Seeing no other way, Admiral Montejo ordered all ships to open the kingstones. Although Isla de Luzon and Isla de Cuba could still continue the battle, the Spanish commander feared that the rest of the ships would come after the gunboat. American sailors boarded the half-submerged Spanish ships and set them on fire. In the afternoon, Commodore Dewey issued an ultimatum to the Spaniards, to which they responded by raising a white flag, thereby ending the battle. 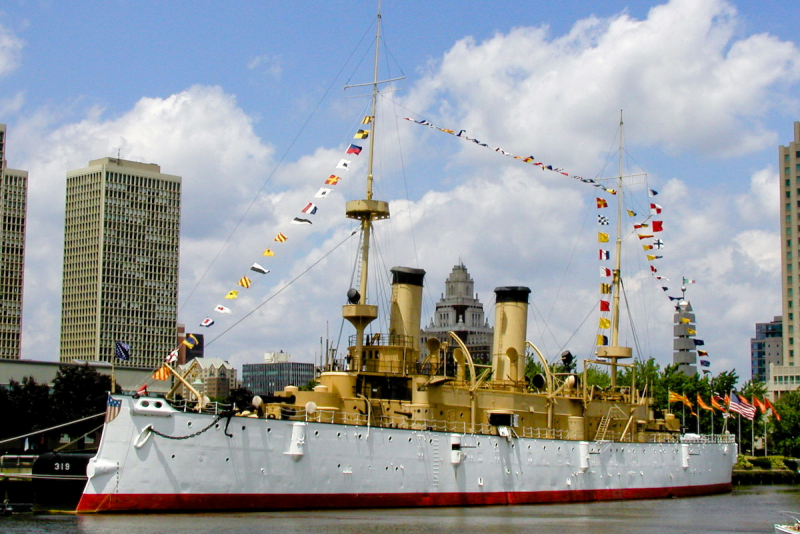 Armored cruiser Olympia in perpetual mooring in Philadelphia
The result of this battle was the complete destruction of the Spanish squadron in the Philippines. According to various estimates, from 60 to 160 people died on the Spanish ships (most of the losses fell on the flagship Reina Cristina), over 200 people were injured. American ships received 19 hits, of which only one, to the cruiser Baltimore, did any damage. During the battle, not a single sailor was killed, 9 people were wounded.

Strategically American victory fleet did not bring any significant immediate results. It was not possible to capture Manila without large amphibious forces. However, this event greatly raised the morale of the American troops and gave confidence in a quick end to the war in favor of the United States. Among other things, the American fleet thus declared that it was ready to compete with the leading maritime powers. Commodore Dewey was promoted to Rear Admiral. Its flagship, the armored cruiser Olympia, was later turned into a museum ship, and to this day it recalls this glorious page in the history of the American navy.

Learn more about another US museum ship, the USS Slater, in this documentary from Wargaming. Happy viewing!