Buy a maroon beret and ... not die 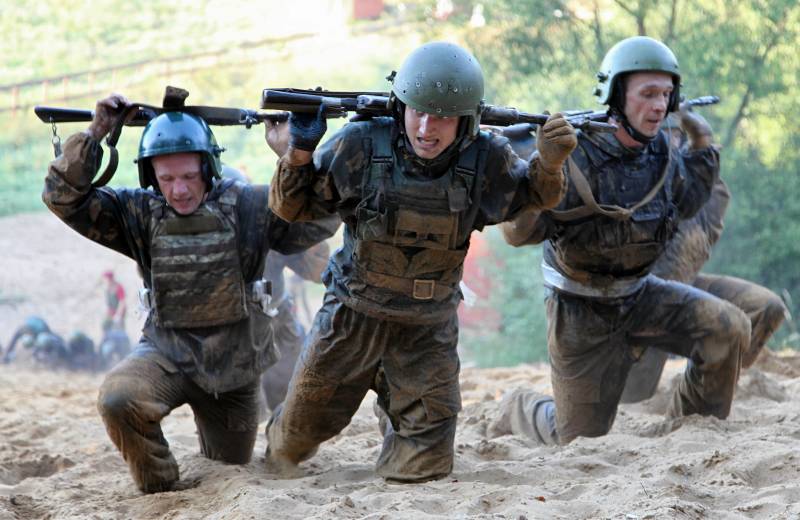 There are things that command respect even among people far from the army, from the Armed Forces in general. The blue takes the airborne troops. Vest of sailors and paratroopers. The sailors' peakless cap. Tank headset. This is material evidence of belonging to a particular caste of people. It's like a reward for what this person has done.


One of these symbols of belonging to the elite is the maroon beret. The insignia that both soldiers and officers dream of getting. And they receive it not for their position and rank, but for knowledge, skills, combat training and fortitude. And all this must be proved without patronage and assistants.

The applicant goes to the exam himself. He himself fulfills the necessary standards. He himself goes to the end or leaves the race if he knows that he cannot reach the finish line yet. Nobody condemns such a person just because the tests are really the most difficult. And those who reached the end and received berets from fellow armsoften cry for joy. With tears of men, for which you are not ashamed ...

And yesterday, October 17, a message appeared that amazed everyone. A message about a fact that cannot exist in principle. Alexander Kots, a war correspondent for Komsomolskaya Pravda, on his Telegram channel, told about a fight that happened during the delivery of the maroon beret at the Tambukan training center of the Russian Guard.

During the march, some members of the special forces were brought up in cars, while others honestly passed the tests. Simply put, fraudsters have appeared among the Rosgvardia specialists. People without honor and conscience. Naturally, these manipulations were noticed by instructors from the "maroon berets".

At one of the areas where the march takes place, the judges "krapoviks" recorded that the Chechen participants were not hesitant to be driven by car while the rest of the fighters passed the control area in accordance with the established rules, equal for all.

After that, the judges of the competition made a decision to remove the participants from Chechnya from the surrender, as a result of which a fight broke out, in which ordinary fighters, who sided with the senior combat comrades, did not stand aside either.

The maroon beret is a symbol of honor, professional skill, courage and devotion to the special forces of the Russian Guard. Therefore, servicemen and employees of special forces units are not shy. Therefore, the scammers were removed from the exam.

Here is how the Hero of Russia, head of the Brotherhood of Krapovy Berets Association, board member of the Union of Veterans of Anti-Terror Units, Sergei Lysyuk, commented on the incident:

I believe that loud slogans and emotions are not needed now. Especially on social media. You need to calmly and in detail to understand everything. This will be dealt with by the main councils of the "Purple Berets" of troops and reserve servicemen. And so it will be. As a result, we will give an objective assessment of everything that happened.

I cannot agree with a respected person, an excellent officer, a hero not only in rank, but also in life, Sergei Lysyuk. Once it was he who stood at the origins of the emergence of the tradition of putting on a maroon beret. And many of those who today tremblingly keep this symbol at home or proudly wear it in the service, wanted to be like it.

What happened during the passing of the standards, what the representatives of the special forces of Chechnya did, is a blow to all the "maroon berets"! For each of those who received this symbol of valor with sweat, blood, courage. It will pass unnoticed, then what will they say about the maroon beret? “You have to, like, take ... But you can buy examiners. Or intimidate. "

Intimidate the commandos? Intimidate the instructor? Intimidate the maroon beret? But there was an attempt to do just that! Scare those who cannot be scared in principle! Otherwise, how to explain the fight that arose on the march?

I understand the soldiers of the 604th Special Forces Center "Vityaz". To quote Alexander Kots:

The conflict did not end with the day of the competition and continued in the morning, when the commandos learned that the leadership of the competition sided with the participants who violated the rules and norms of the fighting brotherhood. In this connection, the soldiers of the internal troops refuse to go out in a maroon beret, which they received with sweat and blood, and not with a call from somewhere else.
The special forces of the 604th Red Banner Special Purpose Center "Vityaz" from Monday in protest takes off their maroon berets and switches to the usual statutory caps.

"Vityaz" takes off its berets in protest. Boggles the mind! I don't remember anything like this in stories Armed forces in general. This fact should not be blurted out, but, on the contrary, should be voiced. The spetsnaz of the Rosgvardia from the Chechen Republic has performed and continues to fulfill its tasks in the region and in other countries. Where the Motherland and special forces will send.

I do not know what decision will be made by the Council of the Purple Berets. I do not know how the leadership of the National Guard of Chechnya will react to the meanness of their fighters. I don't know how the director of the Russian Guard, General of the Army Zolotov, will react. I know only one thing, a maroon beret is not worthy to be worn by a swindler ... He is not worthy already because he not only dishonestly wanted to get a beret, but also because he betrayed the dead Krapovikov! ..

Amendment. Incident (https://t.me/sashakots/26263) on the test for the maroon beret took place in Grozny, where Russian instructors came to take exams from the Chechens. As a result, it all ended in a mass brawl, when applicants for the special forces symbol on the march were brought up in cars.
Alexander Kots