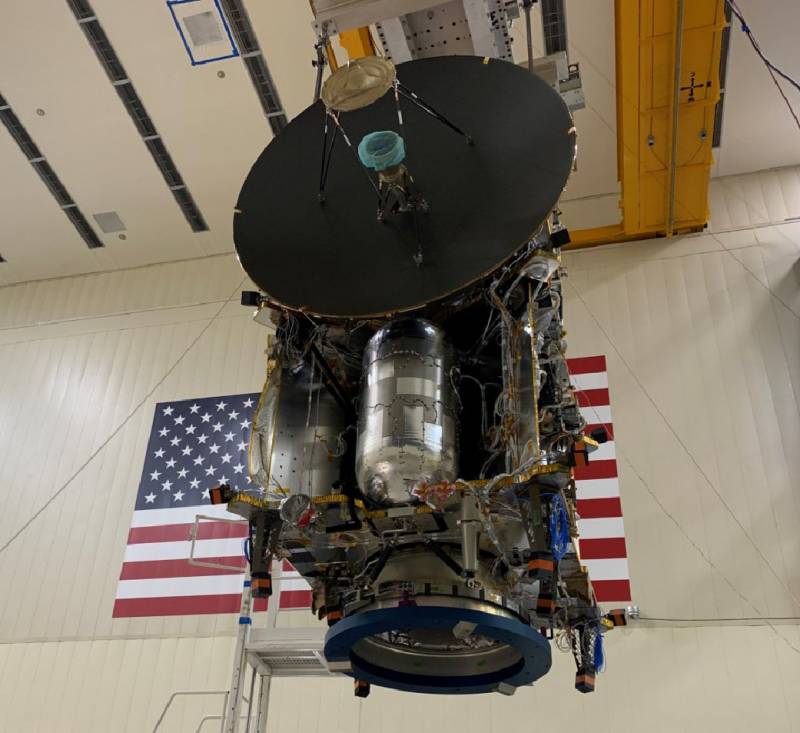 Lucy device in the final stage of assembly

On October 16, NASA plans to launch the Atlas V 401 launch vehicle with the Lucy automatic interplanetary station. The latter will go to the orbit of Jupiter, where it will study the so-called. Trojan asteroids. It is assumed that such a mission lasting at least 12 years will make it possible to collect new data on objects in the solar system, as well as to clarify history formation of planets.

On the way to space

In February 2014, NASA opened a call for bids for 13 and 14 missions as part of the Discovery Solar System Exploration Program. The most successful projects were to be supported by the Agency. According to the terms of the competition, the launch was planned to be carried out by the end of 2021. 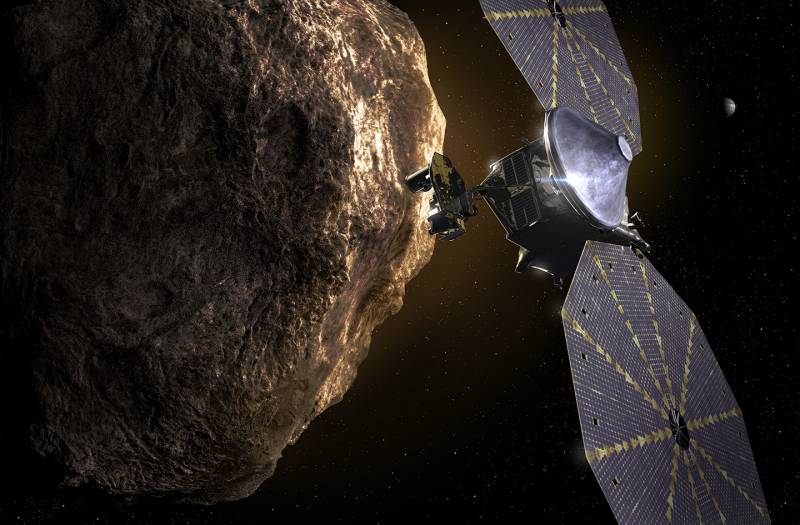 Station in flight configuration
Almost three dozen applications were received for the competition. In September 2015, NASA selected five projects for further development, and at the beginning of 2017 the winners were announced. So, the 13th mission in the framework of "Discovery" chose a project called Lucy. He received full support, and the full-fledged development of the AMC itself and the devices for it began. The general management of the project was entrusted to the Space Flight Center. R. Goddard.

In early 2019, the launch vehicle for the Lucy was chosen, the Atlas V 401 from ULA. The launch was scheduled for October-November 2021 during a 23-day launch window. It is these launch dates that will allow Lucy to get to the optimal trajectory and solve all the daring tasks.

On August 28, 2020, the Lucy project was approved, after which Lockheed Martin began construction of the station. A few weeks later, the first samples of the target load arrived at the assembly site. The construction of the AMS was completed this summer, and on July 30, the device was delivered to the Air Force base at Cape Canaveral, where the launch will take place. On the last day of September, NASA reported on the installation of the station on a launch vehicle. 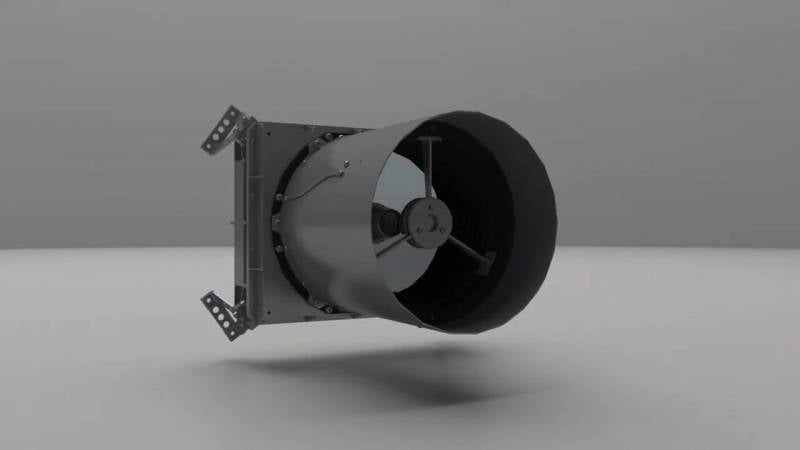 Spectrometer L'TES
According to the latest reports, preparations for launch are continuing on schedule and without delay. The start is scheduled for the first day of the launch window, October 16. While NASA cannot completely rule out small transfers, but the mission will necessarily start in the estimated period.

It is curious that in the program "Lucy" there was a place for symbolism and parallels. It was named after the skeleton of Australopithecus AL 288-1, one of the main fossil finds in the history of human origins. Trojan asteroids are also a kind of "fossil" and can store traces of the formation of planets in our system. In addition, the AMS must fly near the asteroid (52246) Donaldjohansson - it was named after the archaeologist who found Lucy.

AMS "Lucy" is a spacecraft with its own propulsion and power plant, capable of flying along a given trajectory, as well as carrying and using scientific instruments. Assembled station weight - 821 kg; including fuel - 1550 kg. A characteristic feature of the design is various solutions aimed at reducing the size and weight while maintaining the required operating parameters. 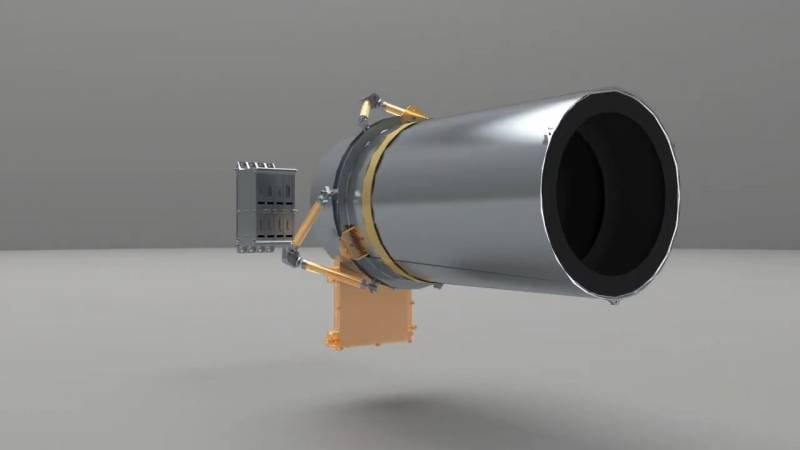 L'LORRI camera
The station is built on the basis of a rectangular body, inside and outside of which elements of various systems and the target load are placed. On its sides are two fold-out solar panels with a diameter of 7,3 m. On the front part there is a main communication antenna with a diameter of approx. 2m, covered with light protection. On the opposite surface is a platform with research instruments.

Due to the use of folding elements, the dimensions of the AMS were brought into line with the requirements of the launch vehicle. In the transport configuration, the height of the station does not exceed 3,8 m, and its diameter is 2,8 m. After the deployment of all elements, the width of the station increases to 14,25 m, and the height is determined by the diameter of the solar panels. 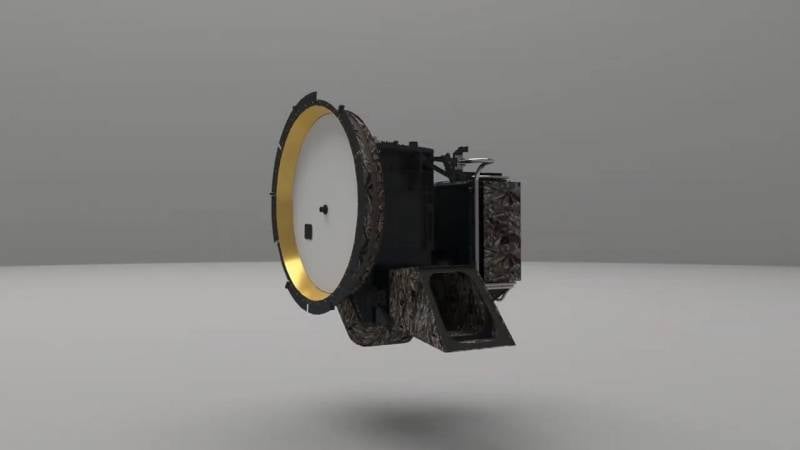 L'Ralph two-piece device
One of the main objectives of the Lucy project was to ensure sufficient power supply throughout the trajectory. For this, solar panels of large diameter are used. According to calculations, even at the maximum calculated distance from the Sun, they will generate more than 500 W, which is enough for the operation of all equipment. Also, batteries are distinguished by high survivability and stability. The station will receive energy even if a significant part of the elements fails.

The station's target load includes only three devices. The first is the Lucy Thermal Emission Spectrometer (L'TES), a thermal infrared spectrometer developed by the University of Arizona. It will help determine the thermal characteristics of asteroids and establish the composition of their surface. A high-resolution camera Lucy Long Range Reconnaissance Imager (L'LORRI) from J. Hopkins University will provide high-quality images of the surface of the Trojans. 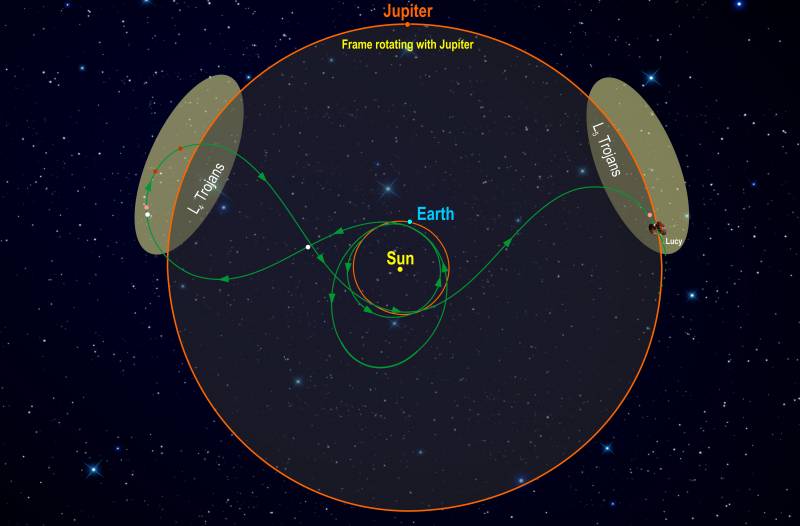 Flight plan for 2021-33
Photographing and carrying out various measurements will be carried out during flights near the asteroids. Even in a limited time, several instruments with different functions will be able to collect a wide variety of data. In addition, it should be remembered that Lucy is the first device to investigate Trojans, and therefore the amount of information available about them will grow anyway.

The Lucy station will have to study Trojan asteroids - two groups of objects located near the orbit of Jupiter near the L4 and L5 Lagrange points. It is assumed that these asteroids represent the remnants of matter that participated in the formation of the planets of the solar system. Accordingly, their study will make it possible to clarify the processes of the appearance of the Earth and other celestial bodies. The study of Trojans from our planet is difficult for a number of reasons, and therefore such tasks were assigned to AMC.

It was originally planned that "Lucy" investigates only two asteroids. However, further calculations showed that the device can be brought to an optimal trajectory, which will provide a flight past eight, incl. of particular interest. This will be a record in the entire history of space research - no other AMS has previously studied so many objects in one flight. 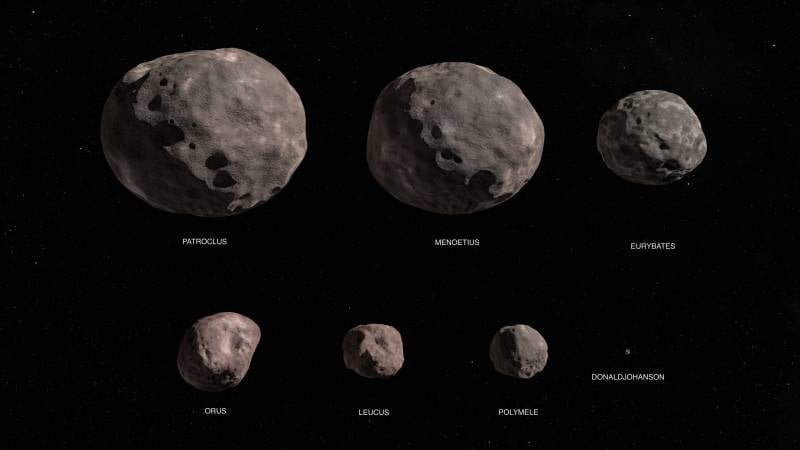 Asteroids - Mission Objectives
On October 16 or later, the station will use the launch vehicle to ascend into a low reference orbit, deploy and prepare for flight. Until December 2024, the AMC will remain with LEO, after which it will change its orbit, receive acceleration and go to the first group of Trojans. In April 2025, the device will pass through the main asteroid belt 922 km from the object (52246) Donaldjohansson.

In August 2027, it is expected to arrive at point L4, where the Trojan asteroids of the "Achaean camp" are located. In the course of several weeks, studies of the asteroids (3548) Eurybat (with the satellite Kveta) and (15094) Polimela will be carried out. After that, the trajectory will change, and "Lucy" will begin to move towards the Sun. Due to this, in April next year, there will be a rapprochement with (11351) Levkus, and in November - with (21900) Orus.

In December 2030, the station will return to Earth, receive a new acceleration and fly to point L5, near which the asteroids of the "Trojan camp" are concentrated. In March 2033, the asteroid (617) Patroclus and its satellite Menetius will be explored. 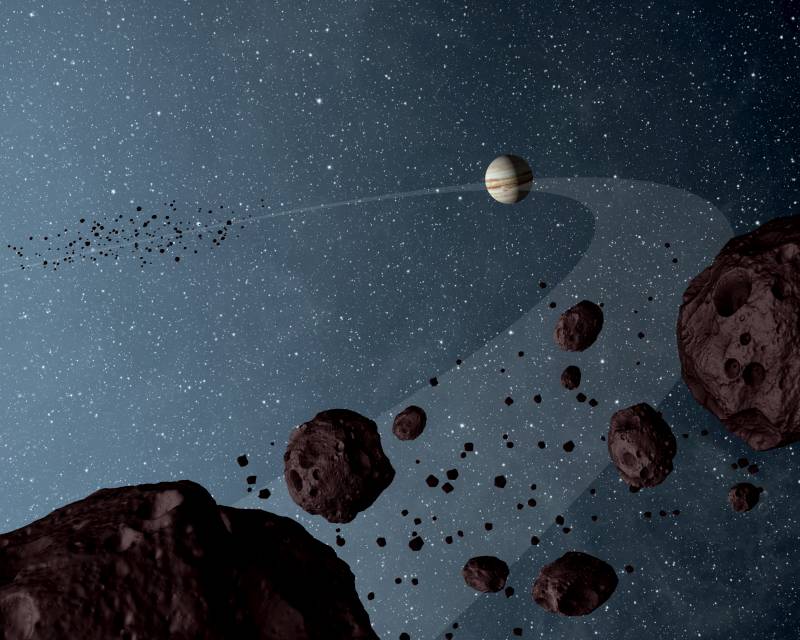 Jupiter and two groups of Trojans - so far only a drawing by an artist
Further plans will be determined based on the results of the work carried out. The Lucy station can be sent back to the "Achaeans" for new research - such a journey will take another 5-6 years. After the resource is depleted, the AMS will continue its uncontrolled flight and remain on the established trajectory. According to calculations, it will be able to continue flying past the Earth from one group of asteroids to another for tens and hundreds of thousands of years.

The launch of the Atlas V rocket with the automatic interplanetary station Lucy will take place in the very near future, and this will launch one of the most interesting space missions of recent times. The data collected by the new AMC will tell a lot about the little-studied objects in orbit of Jupiter, as well as clarify the history of the formation of our planetary system. Such information is of particular importance to science.

Unfortunately, the first results of the new mission will have to wait for several years. "Lucy" will pass through the main asteroid belt in 2025, and will reach the main targets only in 2027 and 2033. However, at the moment, the main task is to launch and prepare the station for operation, on the success of which the entire further course of the mission and its results directly depend.