Bell 360 Invictus and Sikorsky Raider X: The American press spoke about the prospects for the development of new helicopters in the United States 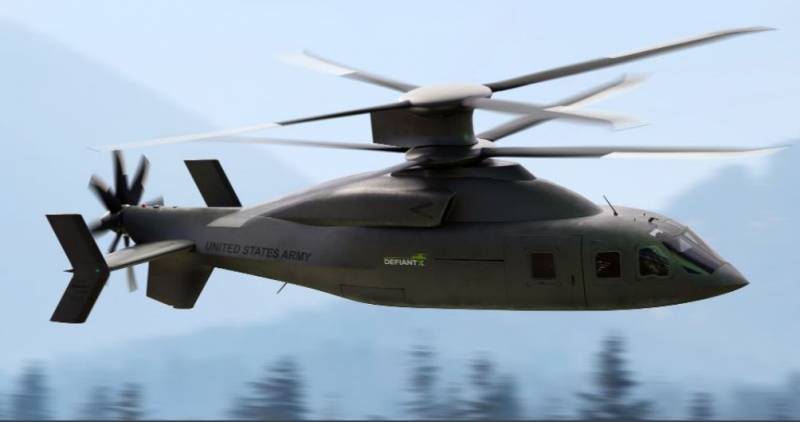 In recent decades, the United States has been actively exploring the possibility of introducing new solutions in aircraft construction, primarily by using them to create new models of army helicopters. aviation... By 2030, writes the Defense News edition, it is planned to develop and create a long-range attack (assault) helicopter and a reconnaissance attack aircraft. Both will be used for the needs of the army aviation, which plays an important role in local military conflicts.


The radical reform of the US Army's helicopter fleet is known as the Future Vertical Lift (FVL) program. It provides for the replacement of the old Bell OH-58D Kiowa surveillance, reconnaissance and support helicopters (they were decommissioned in 2017), as well as a number of heavy attack helicopters with an extended-range airborne assault helicopter and a promising reconnaissance and attack helicopter. So far, the Bell 360 Invictus and Sikorsky Raider X helicopter projects are considered to be real candidates for the finalist of the tender. In 2022, the army must conduct comparative tests of prototypes and select the most promising of them.

General Robert Barry, in an interview with Defense News, stressed that the Pentagon wants to once invest in the development of new technologies, and then use these technologies on various platforms. In turn, Major General Wally Rugen, who is directly responsible for the implementation of the helicopter program in the army aviation, believes that such an approach will find the best way to solve the problems facing the American armed forces.

The Army expects a modular aircraft engine so that individual components can be swapped out without having to replace the entire power plant. This will significantly reduce maintenance costs, not only financial, but also organizational. Also, the US Armed Forces expects from new systems the ability to quickly integrate with existing systems.

Meanwhile, the scale of investment also depends on the availability of attractive options: the military department is not going to invest in unpromising projects. Now the leaders of the American helicopter industry will have to strain their capabilities and show their best side in order to win the sympathy of the Pentagon generals and, accordingly, to claim victory in the competition.

For reference: the Sikorsky Raider X helicopter is designed in a coaxial propeller configuration with a so-called pusher propeller in the tail section. The car is created with the implementation of the principle of low visibility. For this, the "Raider" hull is designed for production from composite materials. The helicopter can be either manned or unmanned. On board, he can transport troops of up to 6-7 people. In this case, the helicopter will, according to the developers, have record speed parameters - more than 440 km / h. The first flight of the prototype took place over 5 years ago.

Video from tests this spring:


Bell 360 Invictus has a more modest top speed: about 340 km / h. At the same time, it will be equipped with a 20-mm air cannon and will be able to carry on board about half a ton of payload in the form of, first of all, missiles of suitable dimensions and weight.