13 September 2012
7
In the engineering design bureau in February 1973 of the year, work was launched to create a two-stage P-29P-based liquid BR, which was a further development of the P-29 ballistic missiles. The main difference between the missile and the previous naval ballistic missiles was the separable warhead, which has individual-targeting warheads, which made it possible to significantly increase the number of targets hit by one rocket salvo. The increased accuracy of the new rocket was provided by a more advanced inertial control system with full astrocorrection. During the further improvement of the complex, its accuracy increased, actually reaching the accuracy of nuclear strikes by a strategic bomber. This made it possible for submarine rocket carriers to destroy not only non-reinforced area targets, but also small-sized objects with a high degree of protection, such as ground-launch intercontinental ballistic missile shafts, special storage facilities. ammunition, protected command posts and the like. 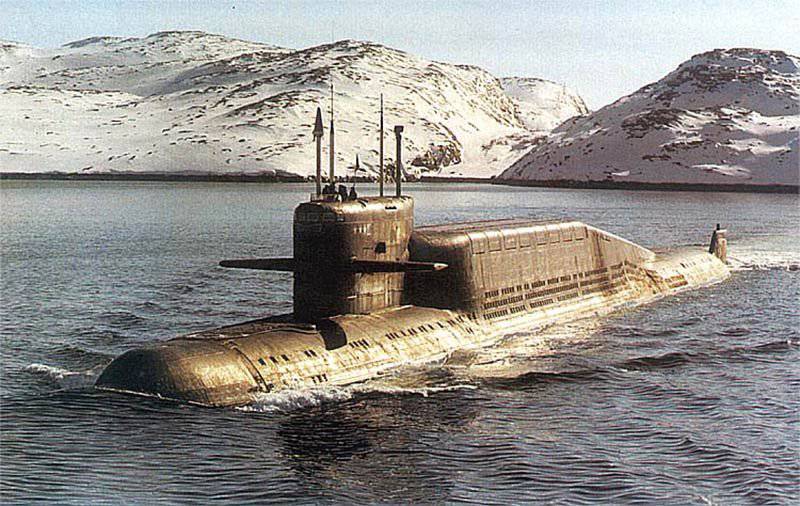 For the installation of new missiles in the Central Design Bureau of Rubin marine equipment under the direction of S. Kovalev (main observer from the naval fleet - Captain of the second rank S. Novoselov) began the development of an improved strategic missile submarine strategic cruiser project 667-BDR ("Squid"), which, like Murena-M, which was equipped with sixteen missile silos. Those. The mission for the new missile carrier was formulated in 1972. The submarine was a further development of projects 667-B and 667-BD. When creating a new nuclear-powered ship, special attention was paid to improving the fire control system: the entire missile ammunition, unlike the project 667-DB, had to be fired in one salvo, the intervals between missile launches were reduced.

The solid hull of the submarine cruiser was divided into eleven watertight compartments. The first, second and eleventh compartments at the same time were shelter-compartments (transverse bulkheads of these compartments were calculated on the pressure, which corresponded to the maximum depth of the submarine). Additional measures were also taken to enhance the fire safety of the vessel through the installation of a volumetric chemical fire extinguishing system in which freon was used. The project 677-BDR received further development and life support crew. In particular, a gym and a solarium appeared on the ship.

The main power plant consisted of two nuclear reactors VM-4С and two steam turbine OK-700А. New five-blade low-noise propellers with improved sonar characteristics were used on the submarine. There was also a pair of TG-3000 turbo-generators.

The submarine cruiser was equipped with the new Rubicon hydroacoustic complex developed under the leadership of S. Shelekhov. The new complex worked in the infrasonic range and had an automated target classification system. The target detection range with favorable hydrology in the direction finding mode reached 200 kilometers.

The more accurate navigation system "Tobol-M1" (on the later submarines - "Tobol-M2") had a storage time of navigation parameters between two observations, which exceeded the 48 hours, which improved the stealth of the cruiser. The complex also included the navigation satellite "Bumblebee", which allows you to determine the position of the vessel on the hydroacoustic beacons-responders. 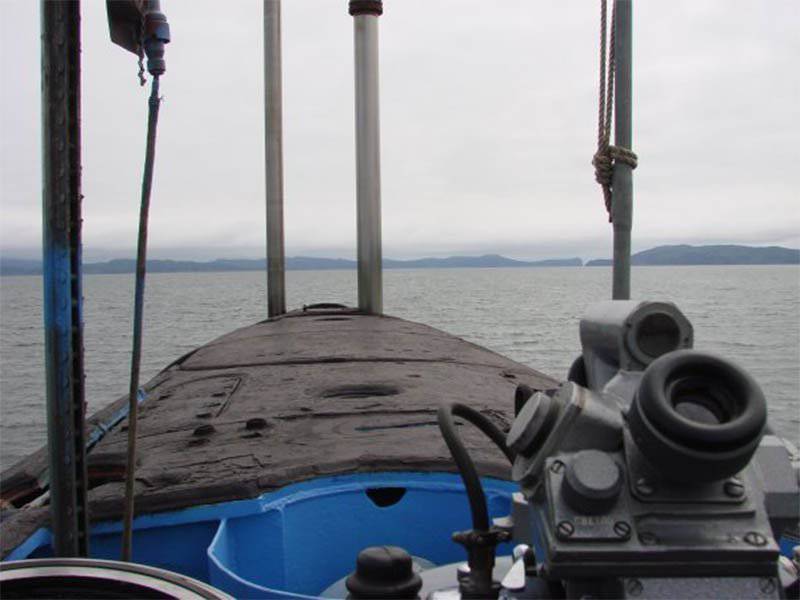 In November of the 1976 of the year, flight tests of the P-29Р rockets began, which ended in October of the 1978 of the year. In the Barents and White Seas, a total of 441 launches were launched from the strategic missile cruiser K-22 (4 rockets were launched in the monoblock variant, 6 - in the three-block launch, 12 - in the seven-block launch). The standard equipment of the cruiser became the P-29Р variants with one and three combat units.

For the submarine, the SKDO (Dynamic Error Compensation System) worked, which measured the instantaneous values ​​of the submarine’s pitching parameters for their transfer to the missile system. 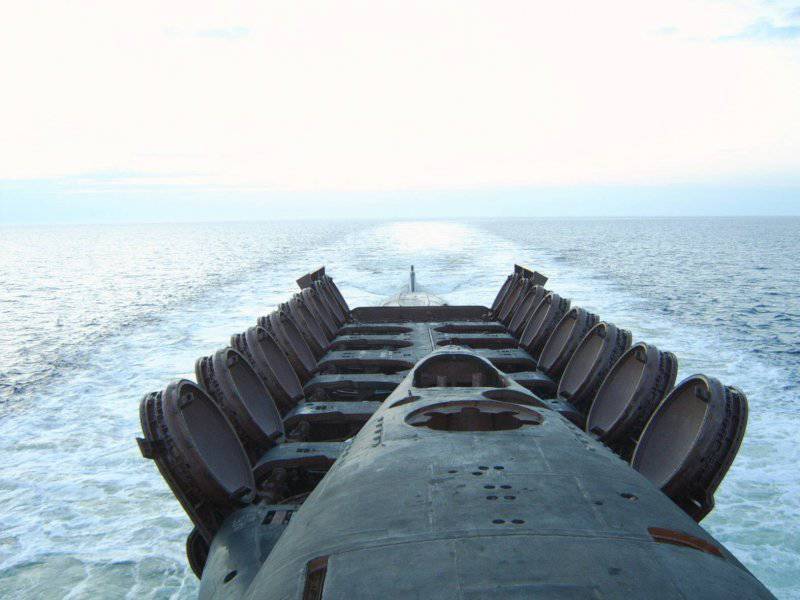 Externally, the rocket carriers of the 667-BDR project are distinguished by the size of the “hump” characteristic of these ships. Since the rocket was longer, the height of the fencing of the rocket mines increased, which in turn led to an increase in the total displacement. The contours of the bow upper part of the hull, where the torpedo loading hatch was located, have changed somewhat. The boats of the 667-BDR project in the West were given the symbol Delta-III class.

During the overhaul, some nuclear submarines of the 667-BDR project were upgraded to the D-9РМ complex having a new intercontinental SLBM R-29РМ (the complex was adopted in 1987 year, the NATO designation is SS-N-23 "Skiff"). The next modification of the P-29Р rocket in 1990 was adopted. During the upgrade, the Tobol-М2 navigation complex, the Aurora-1 hydroacoustic complex, as well as new communication facilities were installed.

On the submarine K-433, which was later renamed "St. George the Victorious ”in the period from 1992 to 2003, the work was carried out to restructure the strategic missile submarine into a carrier of deep-water vehicles for special operations.

The construction of submarines was carried out in the city of Severodvinsk by the Northern Machine-Building Enterprise on the CVD No. 402 in the period from 1976 to 1982 year. The K-441 - the lead ship of the series - was laid in 1975 and in December 1976 was put into operation. Total built 14 hulls SSBN project 667-BDR.

After commissioning, nuclear submarines with the RB of the 667-BDR project were distributed among the fleets as follows: 5 was based on the Northern Fleet (three in the Yagelnaya and two in the Olenya b.) And nine in the Pacific Fleet in the b. Rybachy (Kamchatka).

During the sea trials of the lead ship (K-441), the rocky submarine touched the ground at high speed. The ship was damaged in the forward part of the hull, but the competent actions of the crew allowed it to float, to avoid a catastrophe.

Of the five cruisers of the Northern Fleet formed a division of strategic submarines, which was based in b. Sayda mossy lips (3 SSBN) and in b. Deer (2 SSBN). All ships in the early 1990's. transferred to the bay Yagelnuyu. North Sea ships carried active combat service, patrolling in the Arctic Ocean and the North Atlantic. 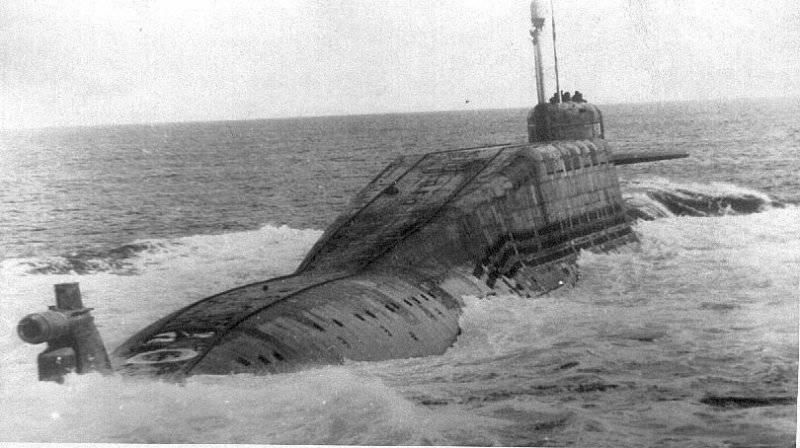 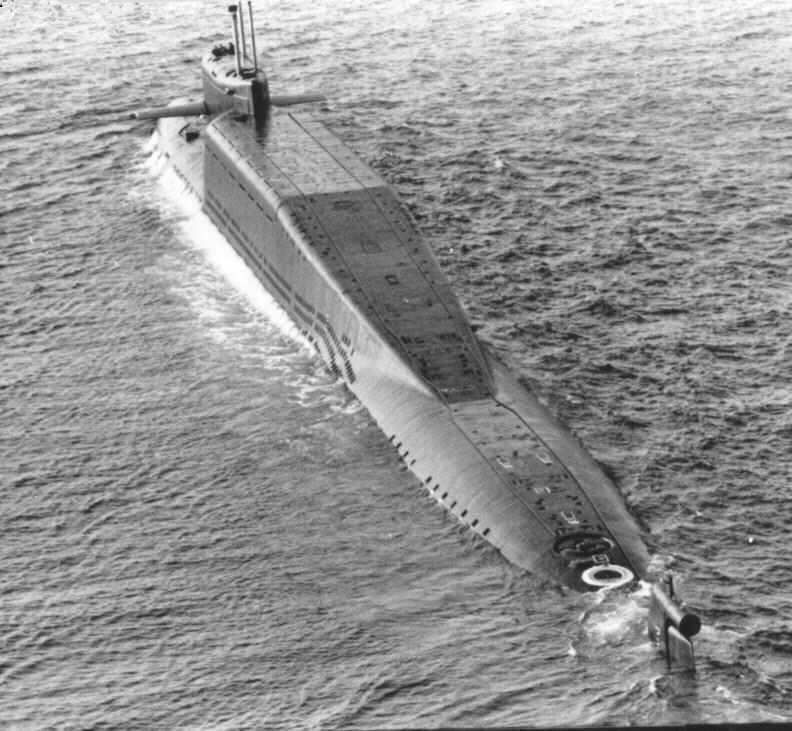 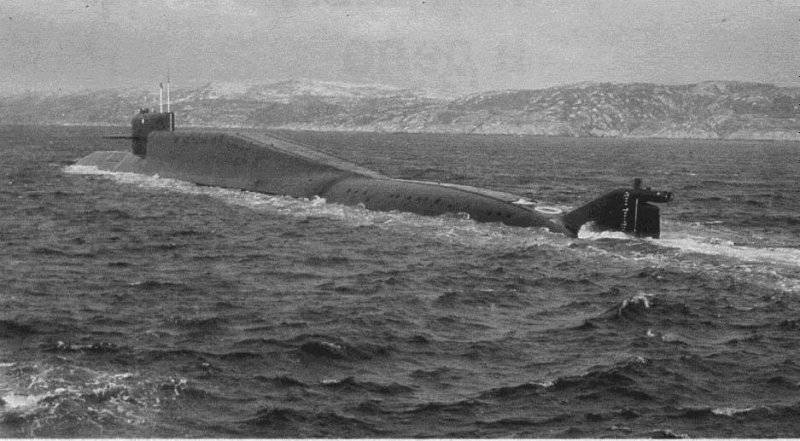 The 667-BDR project ships, starting from 1980, have carried out 7 single transitions of SSBNs to the Far East from the North under Arctic ice. The boats that took part in the inter-fleet crossings, and the end of the polar route (especially in the Chukchi Sea, when leaving the sub-ice) experienced particular difficulties. As a rule, the entire crew during this period for several days was constantly at their posts. Often the depth did not exceed 50 meters. The greatest danger was represented by the shoals and huge ice tracts deposited on them. Above the submarines was ice, up to 15 meters thick. At the same time, the space between the ship and the ice shell decreased to 3 meters with a depth of just 4 meters under the keel. In such conditions, the automated control system was turned off, and the submarine moved with manual control. The physical and moral tension of the personnel reached the limit, but the greatest burden fell on the commanders of the courts.

Despite the increased risk and complexity, the sub-transitions between the theaters attracted by their transience and swimming in the zone that adjoins the territorial waters of the USSR. In February-March 455 submarines K-490 and K-1979 crossed the Drake Strait into the Pacific Fleet along the southern route. During the transition checked the effectiveness of the navigation space system "Gateway".

In one of the SF landfills near the Kola Bay 23 in May 1981, a collision occurred between the Soviet submarine K-211 and the American Sturgeon submarine. The American submarine rammed with its cabin the stern part of the K-211 while it was working out elements of combat training. The American submarine did not surface in the collision area. However, in the area of ​​the English naval base of Holy Loch a few days later an American nuclear submarine appeared with pronounced damage to the cabin. Our submarine surfaced, and came to the base under its own power. Here the submarine was awaited by a commission, which consisted of specialists from industry, fleet, designer and science. The K-211 was docked, and during the inspection there were holes in the two main tank ball feed tanks, damage to the horizontal stabilizer and the blades of the right propeller. In the damaged tanks found bolts with hidden heads pieces of Plex and metal from the cabin of the US Navy submarine. Moreover, the commission for individual parts was able to establish that the Soviet submarine collided with an American Sturgeon submarine.

In 1982, K-211 for the first time made a voyage around the perimeter of the Arctic Ocean under polar night conditions. At the end of 1985, the K-424 submarine carried out an 80 daily voyage to the Baffin Sea, which passed through several arctic straits, during the subworld transition. During the transition, the ship 54 spent days at depths up to 150 meters under the ice.

It can be said that the submarines of the 667-BDR project were more fortunate than the others: many of them went through factory repair and modernization even before 1991, when the collapse of the Soviet defense complex began. The remaining submarines of this type later also passed through the SRH. Therefore, the ships to 2000 year retained a high combat capability. However, the second half of 1990's became the time of their gradual write-off, which was caused not so much by those. reasons, so much the need to respect the US-Russian agreements. K-129 left the line in 1995, K-424, K-441 “joined” it in 1996.

1-2 in October 1999 of the year during the exercise, two SSBNs belonging to the Northern and Pacific regions carried out three launches of the Р-29Р, which started from the Sea of ​​Okhotsk and Barents Seas, hitting training targets at the Kanin Nos and Kura (Kamchatka) test sites. At the same time, the launch of the missiles was carried out “a few minutes after the order was received”. According to the Commander-in-Chief of the Russian Navy, Admiral V. Kuroyedov, these launches should be viewed as “working out options for action by Russia if the United States withdraws from the anti-ballistic missile defense treaty against 1972, and then deploys them nat. missile defense system ". 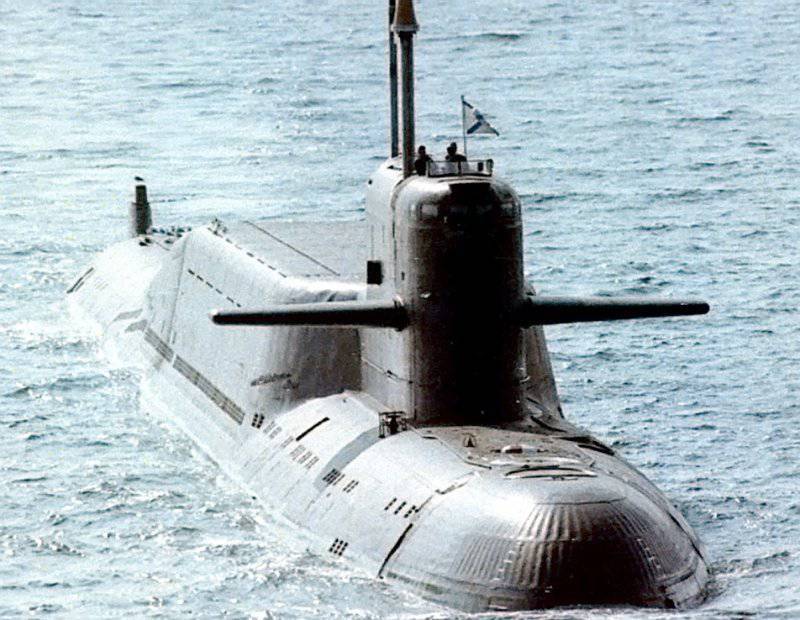