Self-propelled complex with patrolling ammunition OPF-M for the USMC 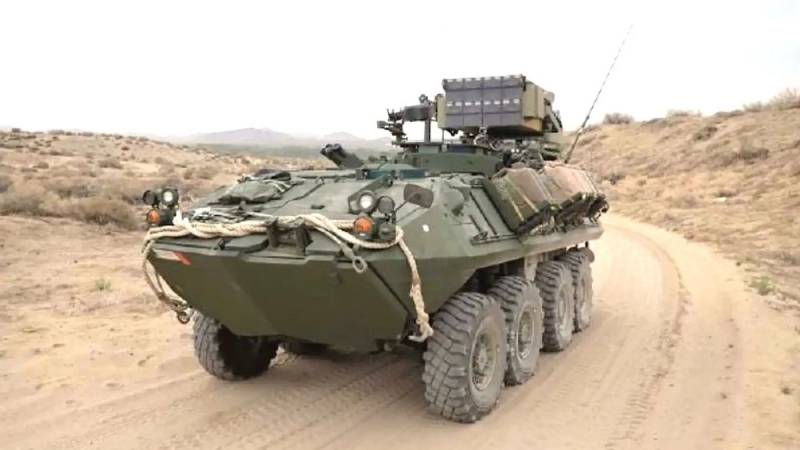 By order of the US Marine Corps, a family of promising combat vehicles OPF-M (Organic Precision Fires-Mounted) is being created. The new line will include several samples on different chassis, equipped with a unified launcher for patrolling Hero ammunition. It is assumed that such a technique will seriously expand the reconnaissance and strike capabilities of the ILC subunits.

From request to prototype

The OPF-M program started in early 2019. Its goal was to create a promising self-propelled complex on an existing chassis, equipped with loitering ammunition. Such a technique was supposed to be entrusted with conducting reconnaissance and delivering strikes when working from closed positions. The possibility of developing a whole family of equipment on a different basis, but with similar performance characteristics, was not excluded.

Several weeks were given for accepting applications, after which the ILC planned to study the proposals and choose the most successful one. At the same time, the start of the main work was postponed until 2020. The competitive part of the program began on time. In November last year, it was announced that its winner would be selected within a few months.

In June 2021, KMP announced the winner of the program and issued an order for the continuation of the work. The American company Mistral Inc. became the main executor of the project. The key components of the OPF-M complex were developed and supplied by the Israeli UVision Ltd. Under the terms of the contract, in the coming months, contractors were to complete the design and build several experimental combat vehicles for testing.

According to the terms of reference, the means of the OPF-M complex should be mounted on three platforms. These are the LAV-25, JLTV armored vehicles and the LRUSV unmanned boat. As ammunition, designated as the Loitering Strike Munition (LSM), the finished Israeli product Hero 120 is used. It cannot be ruled out that in the future new models will appear on a different base and with the possibility of using other weapons.

Shortly after the signing of the contract, UVision showed for the first time a new type of Multi-Canister Launcher (MCL) launcher and a loitering munition launch. In the near future, it was planned to complete its integration with the carrier. 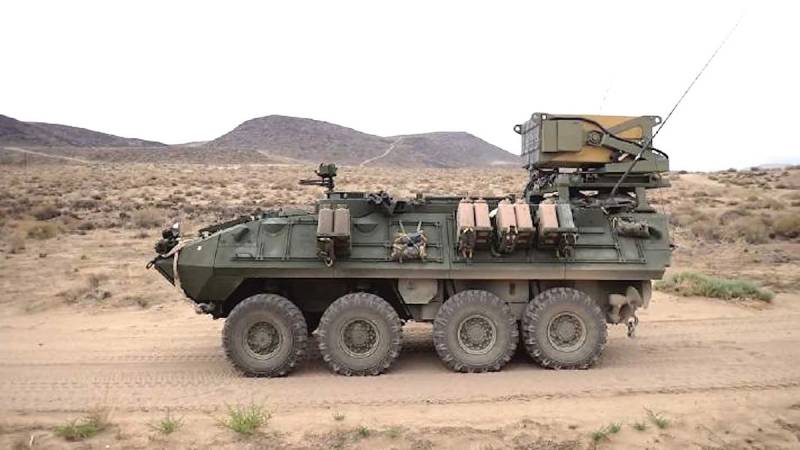 The annual conference of the United States Army Association opened in Washington a few days ago. An obligatory part of this event is an exhibition of the latest developments in the field of weapons and equipment. Thus, Mistral Inc. and UVision revealed new details about the OPF-M project and showed their new developments for the first time.

The two companies have officially unveiled the MCL unified launcher used in the ILC project. In addition, photographs of the OPF-M experimental complex, currently undergoing testing, were published. The first prototype was based on the LAV-M armored vehicle. In the future, the appearance of new prototypes on the chassis required by the customer is expected.

UVision announces that the MCL is compatible with all patrolling ammunition in the Hero line. Depending on the current needs and the task at hand, the complex will be able to use a light product with limited characteristics Hero-30 or use a heavy drone Hero-400. Thanks to this, the complex based on MCL and Hero is able to conduct reconnaissance and attack targets at ranges up to 75 km.

The OPF-M prototype is based on the LAV-M self-propelled mortar, one of the modifications of the LAV-25 serial armored personnel carrier. During the restructuring, new devices and operator consoles appeared in the fighting compartment, with the help of which loitering ammunition is launched and subsequently controlled. Probably, there are also places for placing ammunition.

An additional platform with an MCL installation is located in the aft part of the roof. The latter is a fairly simple structure in the form of a lifting device and a frame on which transport and launch containers are installed. In the transport position, the frame with the TPK is laid horizontally, in the combat position it rises to a large angle.

The number of containers on the installation depends on the selected ammunition. So, when using the main product Hero-120 or less large samples, it is allowed to install eight TPKs. The promotional material featured an image of a launcher with six larger UAVs.

Loitering ammunition of the Hero line
Compatibility of the MCL installation and the OPF-M complex with the entire Hero line is declared. These are small-sized unmanned aerial vehicles with an electric propulsion system, equipped with optical-electronic means for observation and reconnaissance in real time. Also on board there is a warhead to hit the selected target.

For "surgical" attacks, the developer suggests using the Hero-30 ammunition. This product weighs 3 kg, capable of flying for up to half an hour and hitting a target with a 500-g warhead. The larger and heavier Hero-70 ammunition can fly up to 45 minutes. With its own weight of 7 kg, it carries a 1,2 kg warhead. The largest of the short-range UAVs is the Hero-120, weighing 12,5 kg. This device can fly for an hour and carries a warhead weighing 3,5 kg.

Also, a 25-kg Hero-250 ammunition has been developed with a range of 150 km and a flight duration of 3 hours. It is armed with a 5-kg warhead. There are two modifications of the "heavy" UAV Hero-400. They weigh 40 kg each and carry 8 kg charges. The flight duration was increased to 4 hours.

The first version of the OPF-M complex on the chassis of an armored personnel carrier / self-propelled mortar has already been built and is being tested. The task of such tests is to refine the ergonomics and layout of units, check the interaction of various components, study various features of operation, etc.

It should be noted that the first OPF-M prototype is based on ready-made components that have already passed the necessary checks. Accordingly, the current stage of testing is greatly simplified, which allows the customer to count on a faster receipt of the desired equipment.

In the near future, an experimental complex should appear on the chassis of the JLTV armored car. Testing such a machine should also not be difficult and therefore will take a limited time. The same applies to all new projects of the OPF-M family, providing for the use of serial platforms. 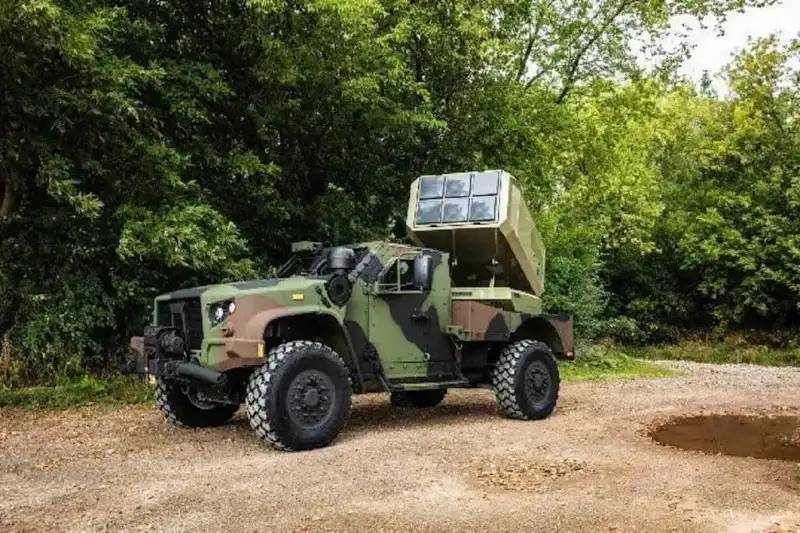 Experimental launcher for Hero based on JLTV. The new OPF-M modification will look similar
It should be noted that the possibility of placing the Hero-120 UAV on a JLTV vehicle has already been confirmed. In 2019, UVision and Oshkosh showed an experimental complex of this kind, equipped with an original launcher. However, this development was not related to the OPF-M program and therefore did not receive direct development.

Of great interest is the modification of the OPF-M complex based on the unmanned boat LRUSV. Such a project should combine two promising areas in the field of weapons and equipment, due to which the most interesting results can be obtained. The unmanned platform will be able to operate on water in different areas, including hazardous areas, without exposing the operator to risks. At the same time, the launch lines of loitering ammunition will be brought forward and the zones of reconnaissance and strikes will be increased.

However, the LRUSV boat is not yet ready for adoption, and the fate of the OPF-M surface version depends on the status of this project. The development of the boat itself is not easy, and the integration of the MCL installation and other tools will be a separate challenge. Time will tell whether it will be possible to solve it.

The United States Marine Corps is trying to keep up with military developments and explore promising avenues. Recently, this structure has shown great interest in loitering ammunition, which not only have known advantages, but have also repeatedly demonstrated them in real operations. In its own interests, the ILC initiated the OPF-M program, and these works are gradually leading to the desired results.

Apparently, the ILC has every reason for optimism and can expect that the OPF-M complexes of different versions will come to service. The new family of technology is based on off-the-shelf components and prototypes to help you complete all tasks quickly and without too much difficulty. However, the exact dates of entry into service and the pace of equipping units with new equipment are still unknown.

Ctrl Enter
Noticed oshЫbku Highlight text and press. Ctrl + Enter
We are
Is the "old" well forgotten to become the "new"? Part-2. At the call of honor and dutyArmored cars of the Piranyev family. Part II
Military Reviewin Yandex News
Military Reviewin Google News
45 comments
Information
Dear reader, to leave comments on the publication, you must sign in.