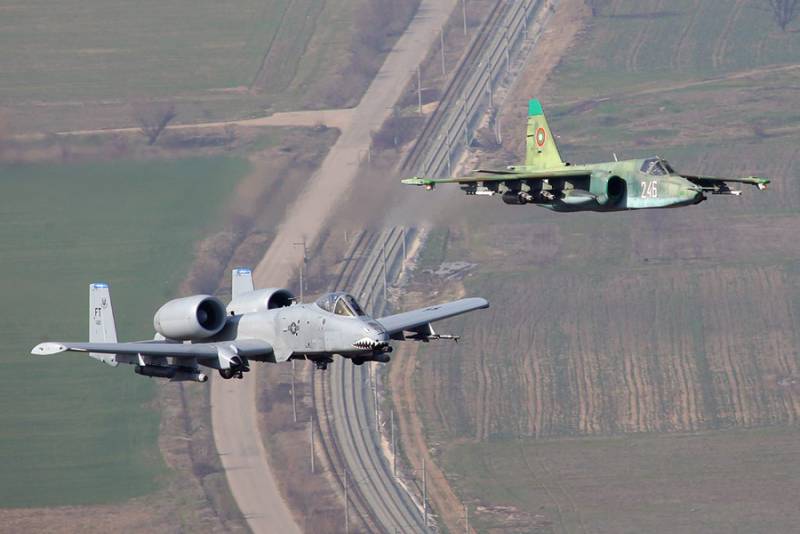 Indeed, an attack aircraft is a very peculiar phenomenon. Today in the world only two countries have been able to create and maintain this class of aircraft. This is Russia, using the Su-25 attack aircraft inherited from the USSR and the United States, which are armed with the A-10.

There are also countries that operate the Su-25, but there, too, the main majority are countries that are former brothers in the USSR and former allies. That is, the planes received at their disposal in terms of socialist assistance. The only exceptions are Congo and Iraq, which bought the planes at a real price. But again, the number of these machines is small.

So, in fact, only two and a half armies in the world can afford attack aircraft. Half is China, which also has the Nanchang Q-5 attack aircraft, which is a deep modernization of the Shenyang J-6, which in turn was a licensed copy of the MiG-19. 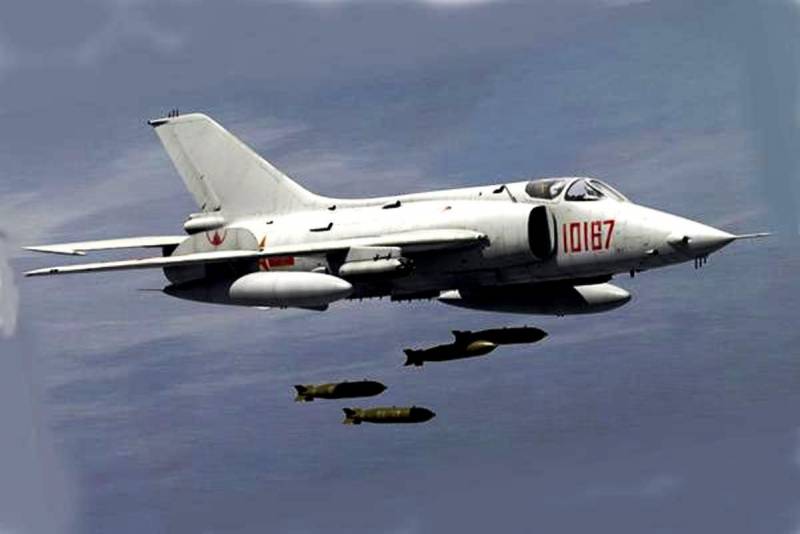 But this is not at all interesting, the MiG-19 as a model under 70 years old. So the Q-5 is still very old and therefore does not quite fit into the concept of what we might call a battlefield aircraft today. Moreover, in fact it is just a fighter converted into an attack aircraft.

However, it can also carry out certain combat missions. But the A-10 and Su-25 are still very far away.

Comparisons of our heroes, "Rook" and "Warthog", were given many gigabytes. We will not compare these aircraft, from my point of view, these are machines created for completely different tasks. 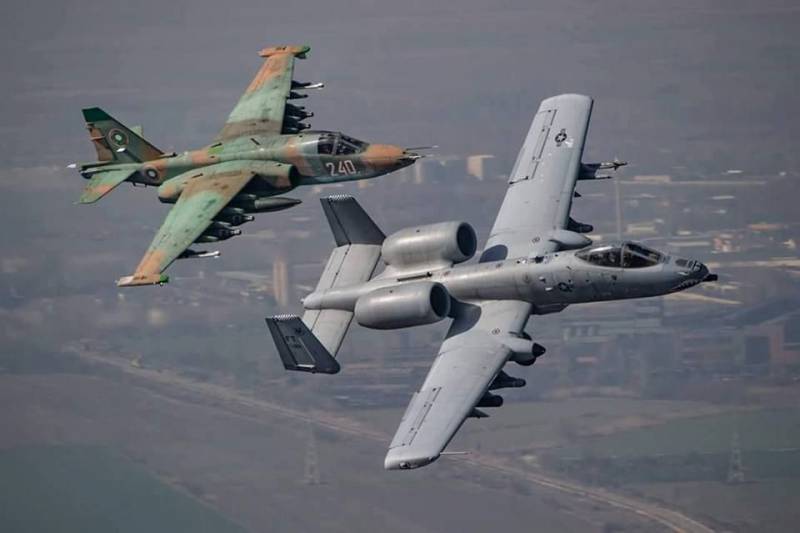 The A-10 was created in the 60s and 70s of the last century (first flight - May 1970), when all NATO was really in awe of tank armadas that the Soviet Union had. And who could really skate across Europe. Therefore, everything was created that could withstand such a force.

So the "Warthog", gathered around a powerful GAU-8 / A cannon and with additional weapons in the form of a very sane guided missile AGM-65 "Maverick" could well become one of the means of deterrence if it came to such a confrontation. 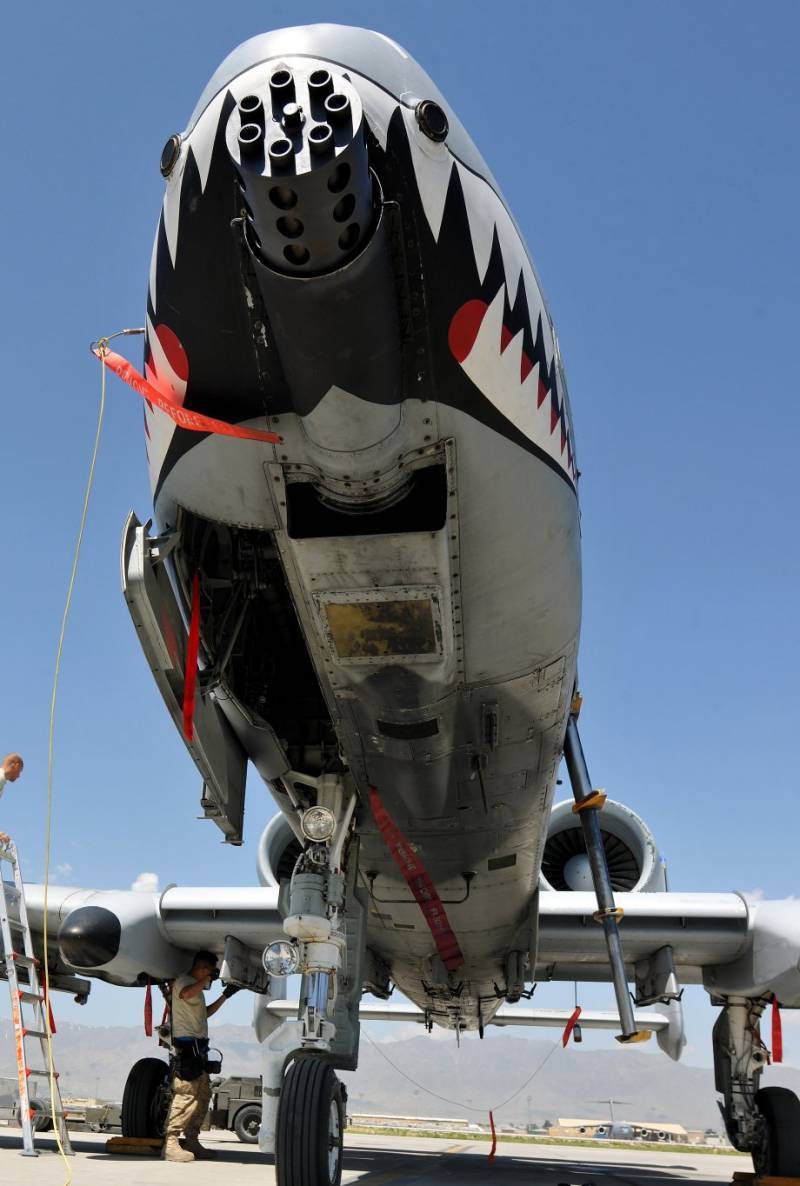 By the way, perhaps this is precisely why the United States surprisingly did not rush to sell the A-10 all over the world. "Only for myself".

The idea of ​​an "airplane around a cannon" can be said to have not justified itself, the main majority of targets in the conflicts where the A-10 took part were destroyed by missiles. Therefore, in its further development, the A-10 began to fly higher and "reach" with weapons farther than at the beginning of its career.

But without a doubt, the plane remained an attack aircraft. Albeit inscribed in the new concept of safe long-range combat. 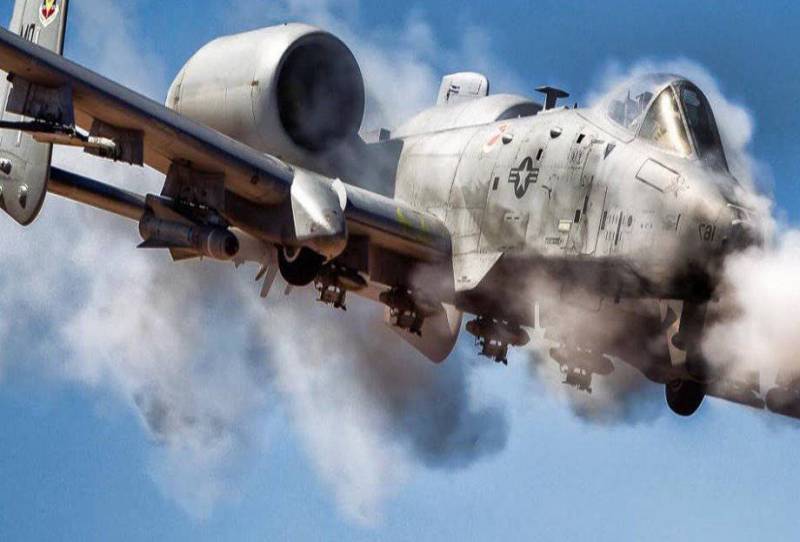 The Su-25, on the contrary, was created as a means of the Apocalypse for the front line. The principle of using this aircraft was identical to its predecessor, the Il-2. Support for ground forces and total annihilation of the enemy at the forefront by all means available for this. 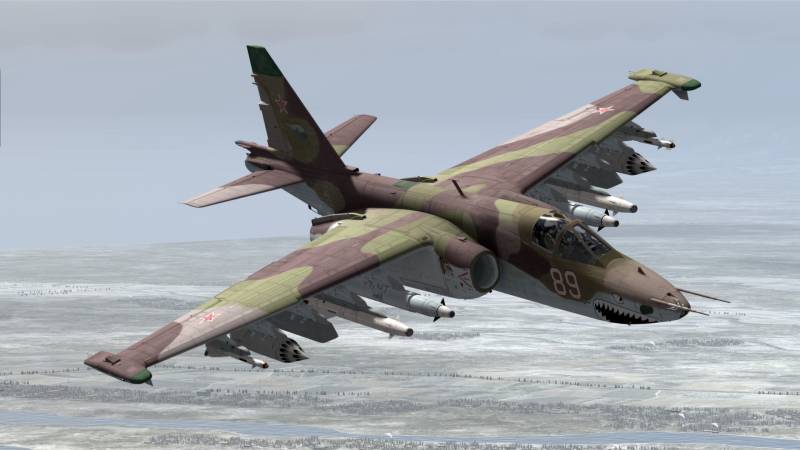 Above the A-10 for the last 20 years, the threat of decommissioning has been hanging like a sword of Damocles. The aircraft somewhat does not fit into the concept of war at long distances and with minimal losses. It is gradually squeezed into the sphere of tasks of conventional fighter-bombers, although from time to time the "Warthog" works on ground targets precisely as an attack aircraft.

But there are many arguments in favor of a complete rejection of the A-10 as a vehicle and an attack aircraft as a class. And, by the way, these views receive support from the US Air Force itself, since they believe that today the A-10 is even more vulnerable to air defense weapons than 50 years ago.

And after all, it is also necessary not only to maintain the machines, but also to train pilots and technical personnel for them. And this is a very, very weighty argument.

The most interesting thing is that the Air Force wants to get rid of the A-10, and the US Congress plays the role of lawyers. And in Congress they openly demonstrate their unwillingness to abandon the A-10 in favor of fighter-bombers.

Argumentation, let's say, is somewhat enticing, but it has rational grains in it. Today, in any conflict with an equal adversary such as Russia or China, aviation The United States may suffer losses from air defenses and fighter jets. But excuse me, this is the essence of war!

In addition, the US Air Force is armed with other aircraft, which by no means can be called new and modern. This is the F-15, and the F-16 and, of course, the B-52. And for all these machines, the statement is quite true that in modern combat they will suffer losses.

And yes, the A-10 can easily be used in conflicts with weaker opponents, as was the case, for example, in Afghanistan or Iraq. The so-called "expeditionary conflicts" against an enemy that does not have advanced air defense systems. Or in isolated conflict zones, in which the enemy's air defense will be suppressed, and resistance on the ground continued. 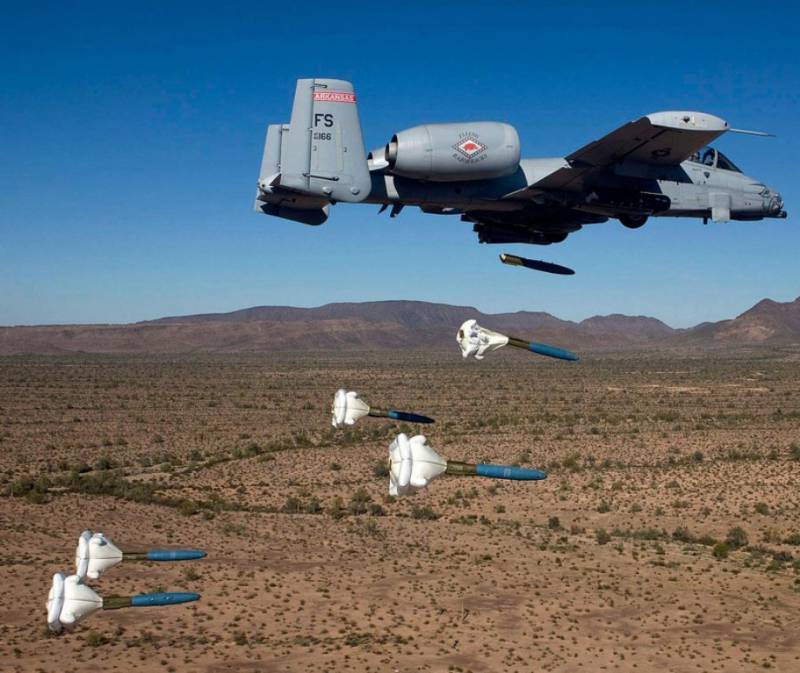 Well, yes, there is a certain feeling of similarity to the Ju-87 "Stuka" blitzkrieg instrument. The plane is very bad, but in the absence of opposition, the 87th was capable of causing great harm.

Apparently, the US Congress believes that it is too early to abandon an instrument like the Warthog. Apparently, conflicts of this kind, if not planned in the United States, are not disregarded.

Everything is exactly the same with us. No one is going to give up the Su-25, despite their age. Yes, some gestures were identified under the ROC "Shershen" program, we talked about the PAK SHA program, but after the "successes" with PAK FA and PAK DA, the conversations subsided. 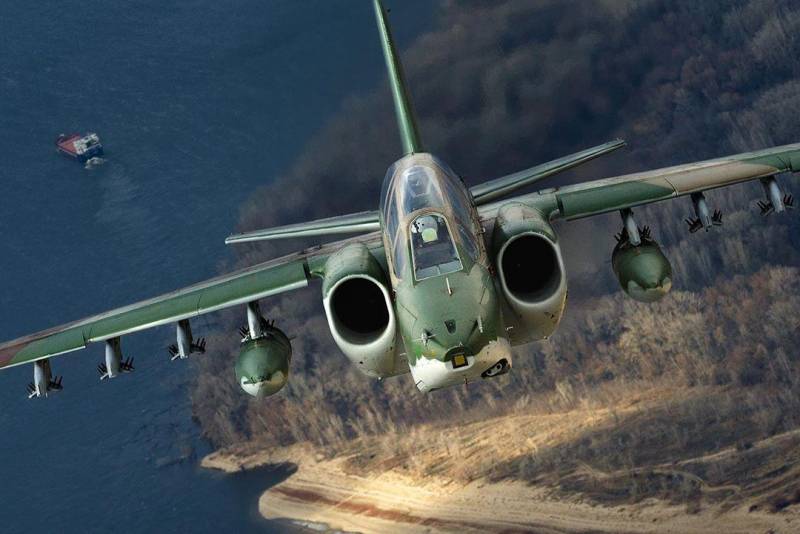 And then, having studied the capabilities of the Su-25SM3, our military came to the conclusion that it is possible to use the Rook for some time, bringing all the remaining aircraft in service to the level of SM3. And with the development of a new attack aircraft platform, we can wait until better times.

There were also voiced "ideas" about replacing the Su-25 with the Yak-130, but, to be honest, it just makes you laugh. And those who want to sit at the helm of a "light attack aircraft", practically unprotected in terms of armor, and iron the enemy's front edge or firing points on it, as the Su-25 did in Afghanistan or Chechnya, are likely to be very few.

Rather, it would be wiser to restore, just in case, the production capabilities of the aircraft building enterprise in Ulan-Ude.

On the whole, it turns out to be an amazing situation. Almost the whole world has abandoned the idea of ​​using attack aircraft, gradually replacing them with fighter-bombers.

At one time, Germany, England, Belgium, Japan, South Korea, Australia wanted to acquire the A-10. However, not a single deal was made. Potential buyers decided that it was too expensive, and therefore revised their concepts towards fighter-bombers.

Indeed, an attack aircraft is still a whole complex of costs, in which the acquisition of an aircraft is not the most expensive component. 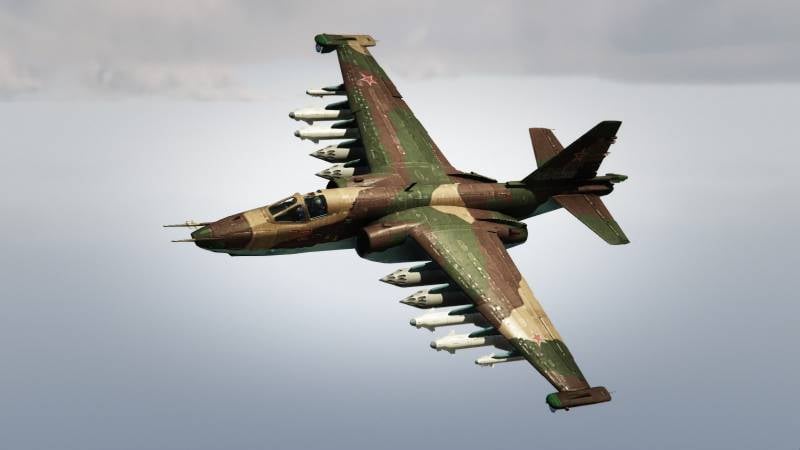 Yes, developing, testing, flying around, working out errors and starting mass production is just the beginning.

Next, it is necessary to prepare a technical base for maintenance, train engineering and technical personnel, instructors, who will then begin to train pilots. And at the headquarters of the Air Force generals and colonels should sit and develop instructions and manuals for the use of these aircraft. And then on-site crews will have to practice all this both on simulators and in a real and almost combat situation.

In general, it is a really troublesome and energy-intensive business. Therefore, the majority of Su-25 operators have from 2 to 10 such aircraft. Just in case. These are mainly African countries, where local clashes with neighbors are common and not very burdensome.

The countries of the former USSR that inherited the Rooks also have these aircraft in service and are using them. But we can say with confidence that with the practical application in the same Armenia and Ukraine, everything is not very good, mainly, not the best training of pilots affects. The Armenians lost 2020 aircraft in a collision in Azerbaijan in 5, the Ukrainian Air Force lost 6 aircraft during a very limited use in the Donbas. Mainly from MANPADS fire.

A-10 also suffered losses. During Operation Iraqi Freedom, 2 aircraft were lost, one with a MANPADS missile, the other was perforated by an MZA.

For an aircraft operating at the forefront of the war, the losses are justified and justified. This is the front line of the war, everything is shooting here. And therefore the work of an attack aircraft is quite logical and useful. 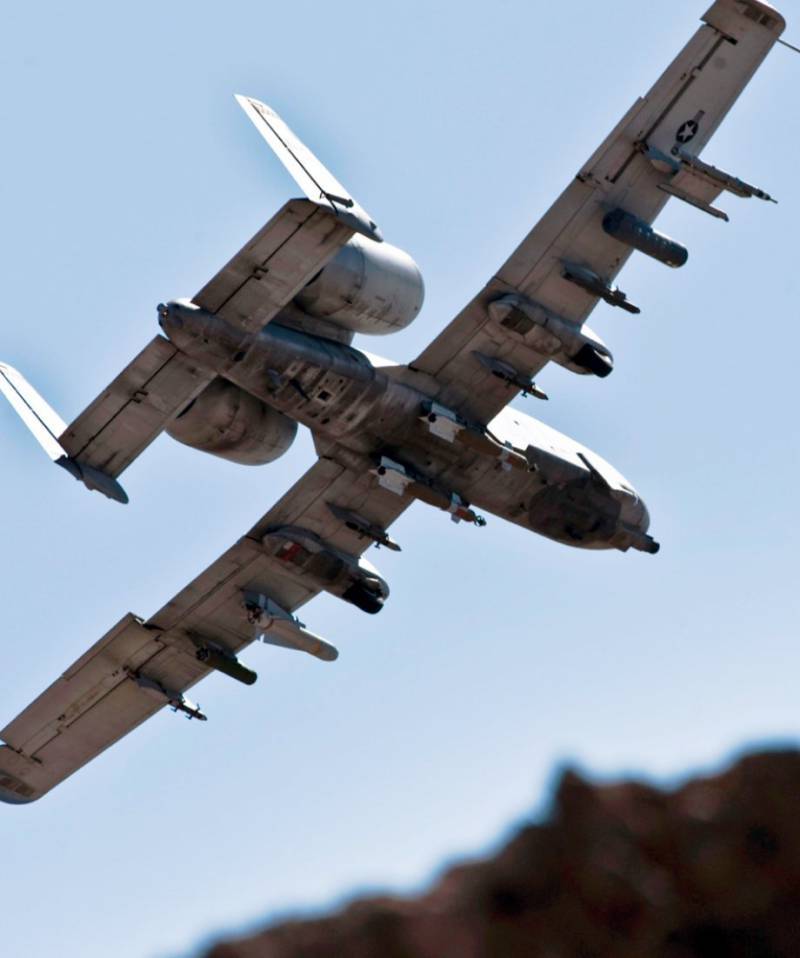 Nowadays, the military sometimes gets too carried away with fantasies, talking about how robotic systems will fight on the ground, and UAVs in the sky. Of course, the development of technology sooner or later may lead to such a development of events, but this is likely to happen a little later.

Artificial intelligence, which so far sits in parliaments and general staffs, of course, will one day receive a residence permit in the cabins of aircraft and tanks. Already today, robots and remotely controlled complexes are capable of performing certain combat missions. But a full-fledged replacement will take place very far away.

And here the closed assault club represented by the United States and Russia looks very, very meaningful. Yes, unmanned fighter jets with artificial intelligence, yes "network-centric wars" with equipment for the cost of under the clouds ... All this looks beautiful in commercials.

If we are talking about a local conflict, and even more so, with an opponent equal in capabilities, all this is still going into the realm of fantasy. "Network-centric war" can very easily end where the real electronic warfare begins. It will be very difficult for a UAV to portray something in a "blind" zone of complete suppression.

Well, about the use of high-precision ammunition worth tens of thousands of dollars against firing points dug out with shovels ...

In general, writing off such things as a mortar and an attack aircraft is not that early - it is stupid. Therefore, even in the future, the attack aircraft above the leading edge looks very logical. 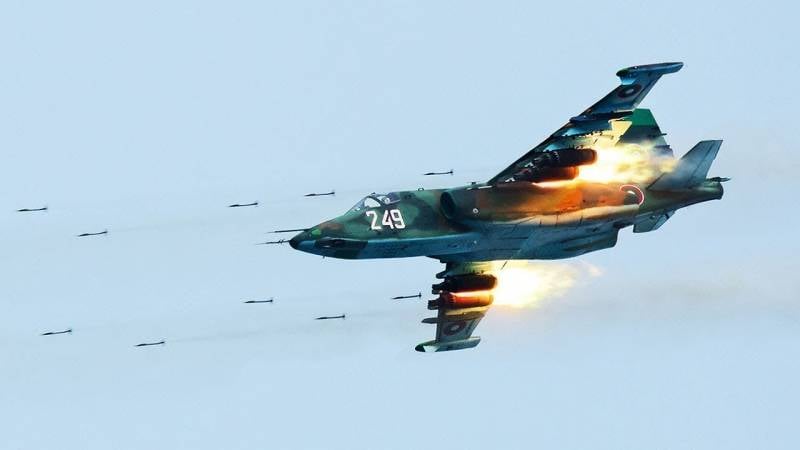 Apparently understanding this alignment, neither the Congress nor the command of the Russian Air Force, on the one hand, are in no hurry to develop new attack aircraft, but at the same time they are not going to retire the old aircraft.

In fact, the "oldies" A-10 and Su-25, tested by the fire of more than one conflict, may turn out to be a more expedient force than the hypothetically developed aircraft of the next generation. How difficult it is in the world today with new aircraft, we all see. And on the examples of the American F-22 and F-35, and on the example of our Su-57 and Chinese J-20 and J-31.

And the front-line aircraft (well, the A-10 is not quite that kind of aircraft) must be reliable, protected and inexpensive. So that it can be painlessly lost. 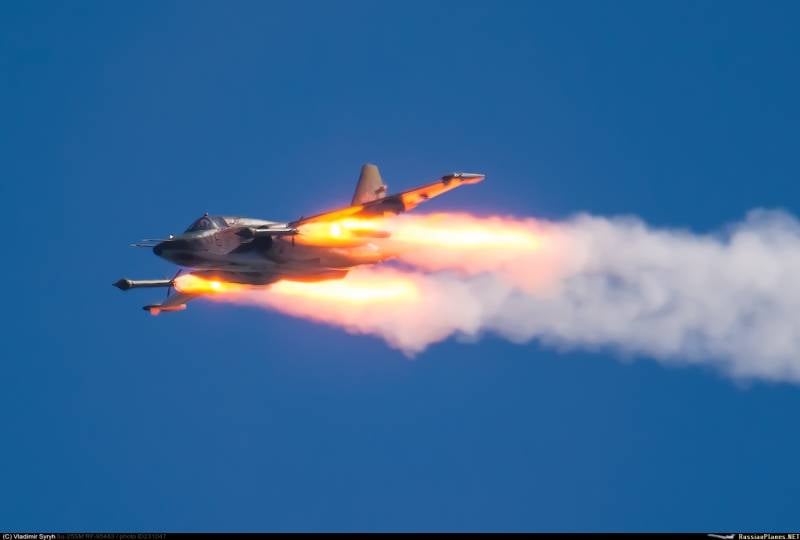 So "Rooks" and "Warthogs" still fly and fly. Moreover, they know how to do it quite decently and painfully for the enemy.