UAZ - 80 years old: a glorious past with an army bearing 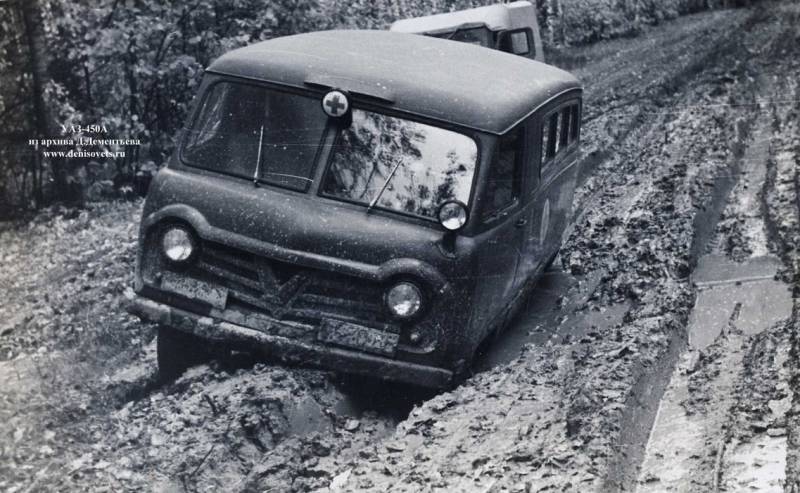 The first independent development that ended up on the assembly line of the car plant was the UAZ-450A. Source: denisovets.ru

In previous parts stories Ulyanovsk cars, it was about the evolution of the UAZ-469 model. On the eve of the anniversary of the automobile plant, it is necessary to pay special attention to the glorious history of the birth of the enterprise.

The Great Patriotic War had a tremendous impact on the location of industrial enterprises. The rapid German offensive in 1941 forced the government to hastily evacuate defense factories. The Germans launched the first air strikes on the Stalin Plant on 23 June. However, the enterprise worked until mid-autumn, right up to the beginning of the evacuation. Director Ivan Aleksandrovich Likhachev received an order to transfer the 40-thousandth plant on the evening of October 15. In the book "History of the Ulyanovsk Automobile Plant", this episode, according to the head of production of ZIS P. I. Smirnov, is described as follows:

“At about 20 pm I came to the director's office. Likhachev walked nervously from corner to corner. A revolver is fastened to the waist belt of the gymnast. Seeing me, he came up, shook my hand and said: - Well, Pavel Ivanovich, we will build a plant and establish the production of cars in Ulyanovsk. This is the direction of the government. Get documents and money. Take any car and, no later than two hours later, drive through Gorky to Ulyanovsk. Schwarzburg was appointed director of the Ulyanovsk plant.

I declared that I was ready to stay in Moscow until the last moment, but received a secondary and categorical order to leave immediately ...

I left the yard. Wet, heavy snow poured down. People scurried about in the darkness. In some places, the blue lights of the sidelights flashed.

It is hard on the soul of every car manufacturer. It was a pity to part with his native plant, and at the same time, anger towards the hated enemy is growing. Okay, Ulyanovsk, so Ulyanovsk! " 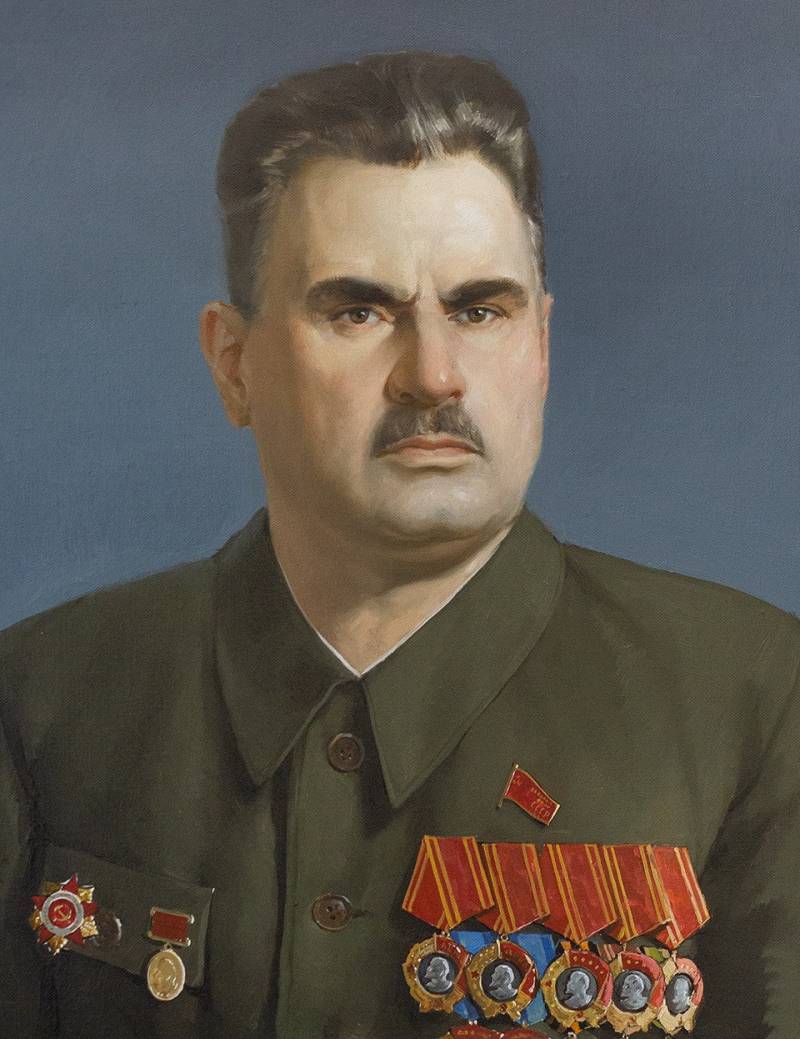 Ivan Alexandrovich Likhachev. Source: museum.mintrans.ru
Already on October 20, 1941, the first workers arrived at the new location of the plant. The warehouses of the State Customs Administration were chosen for placement, which were packed with ingots of non-ferrous metals, machine tools, rubber and medical preparations supplied under Lend-Lease. It was not completely possible to move the giant enterprise to Ulyanovsk - the engine builders relocated to Miass. By the way, it was the delay in the release of engines that became the reason for the storage of a large number of Ulyanovsk ZIS-5s with hollow hoods in the future. 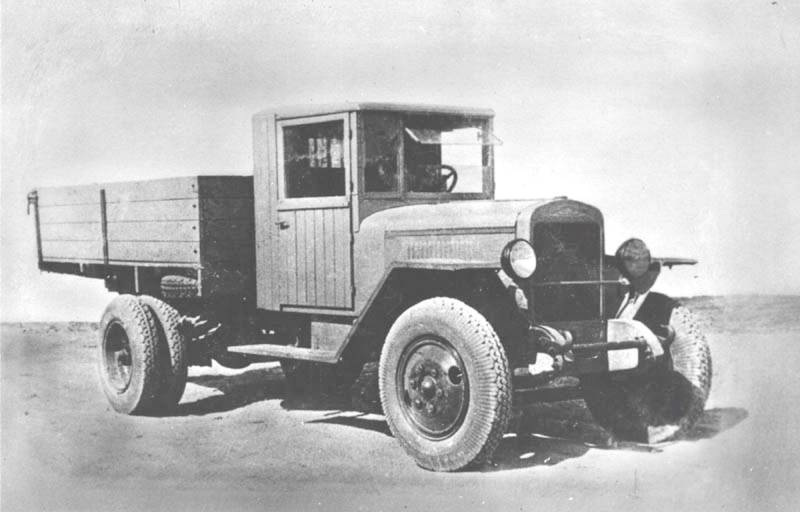 ZIS-5V. Source: denisovets.ru
Ammunition was the first product of the Ulyanovsk Branch No. 4 of the Stalin Plant (Ulyanovsk Automobile Plant named after Stalin). The release of the shells urgently needed by the front was organized in February 1942 in the tool shop No. 2. And at the end of April, the fully equipped ZIS-5 trucks finally came out of the gates of the plant - Miass was able to supply the engines in full. The assembly of the first cars was carried out on improvised wooden stocks from components that were brought back from Moscow. The main conveyor was launched only in October 1942, and this made it possible to double the productivity to 60 ZIS-5 per day. Since the end of 1943, the enterprise has also assembled several hundred American Studebakers from lend-lease vehicle kits. A year later, it was decided to transfer to Ulyanovsk the production of no less legendary than the ZIS-5, "one and a half" GAZ-MM. By the end of the war, it was not possible to master the full cycle at the UAZ, and the first GAZ-MM left the assembly line already in 1947. The plant produced 150 trucks per day, and finished with them only in 1951. The Ulyanovsk automobile plants managed to organize the production of almost 100% of all the components of the "lorry" independently. In 1949, an attempt was even made to make a cosmetic, as they would say now, restyling of the GAZ-MM. 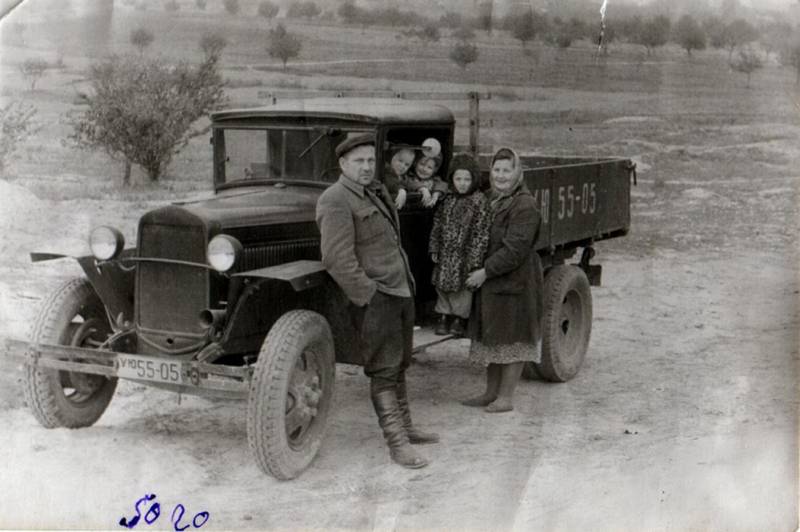 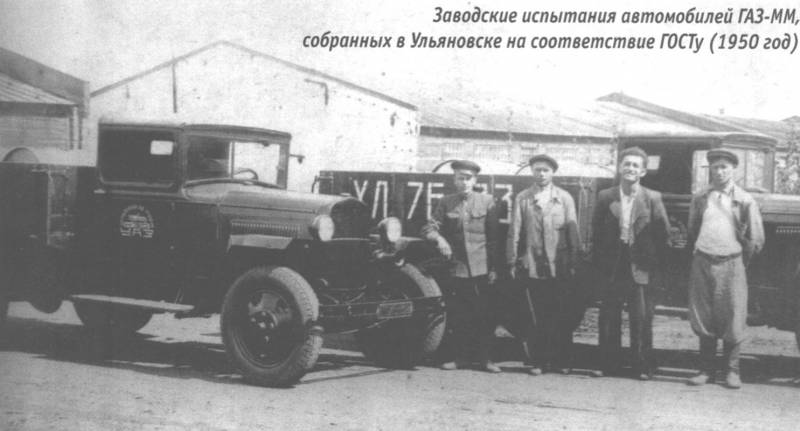 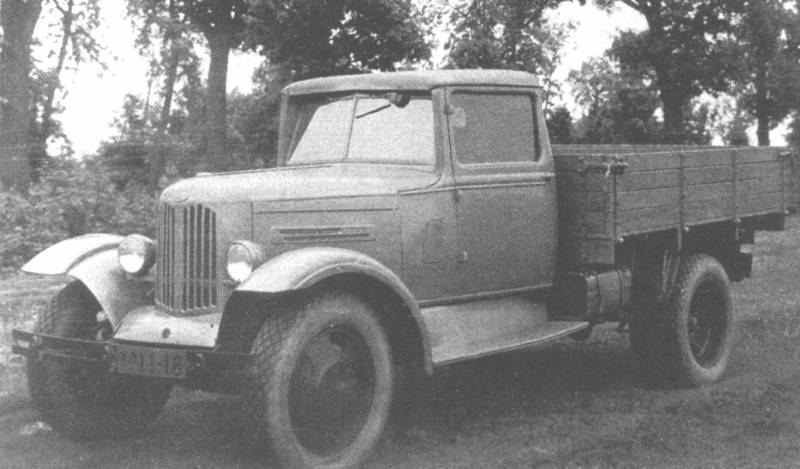 A rare photo of a GAZ-MM refined at a UAZ. Source: denisovets.ru
It should be noted that the Ulyanovsk Automobile Plant has become a forge of top-class engineering personnel. Among others, the figure of the chief designer Boris Lvovich Shaposhnik stands out, who after the war became the head of the SKB of the Minsk Automobile Plant. It is his talent that we owe to the MAZ family of heavy rocket carriers.

Shells and trucks were the main products of the Ulyanovsk plant, but not the only one. In August 1942, a directive came from Moscow on the urgent production of stationary subcompact engines L-3/2 "Leninets". Despite the fact that the engine was domestic, no documentation was sent to the factory workers. As a result, the plant director Peter Schwarzburg ordered the design bureau to switch to a 16-hour mode of operation and quickly "sketch" every detail of the motor. By the end of September, prototypes L-3/2 were ready. On the basis of this motor production, in 1944, a separate Ulyanovsk plant of small displacement engines was formed.

Army (and not only) history

A detailed 80-year history of the automobile plant in Ulyanovsk will take several articles, so we will focus on the most significant milestones of the post-war period. Like the entire domestic auto industry, UAZ was impressed by American technology. Despite the fact that the enterprise actually turned into a branch of the Gorky plant at the end of the war, engineers did not abandon attempts to create something of their own. 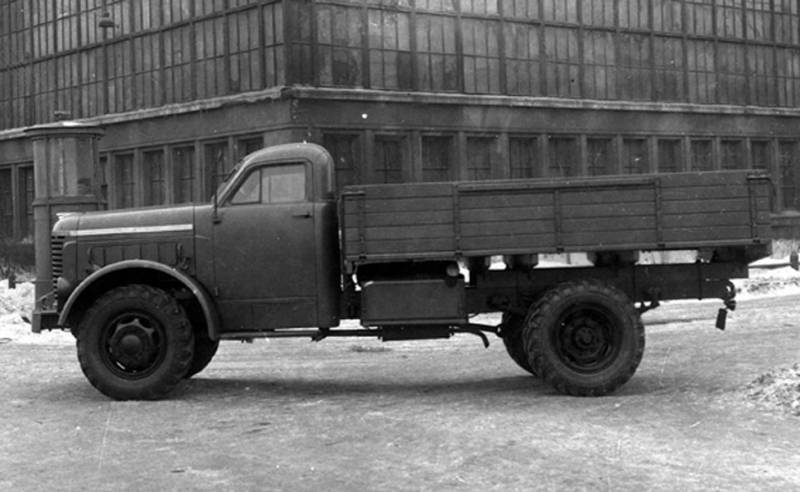 Diesel UlZIS-253, developed by NATI. Source: denisovets.ru
After the stillborn UlZIS-253, which was supposed to receive a two-stroke diesel, the plant developed pickups of the UAZ-300 family. The car was very similar to its American counterparts, it could carry up to 1 ton and was unique for the USSR. Also in 1949, several UAZ-302s were assembled - the distant ancestors of the modern one and a half ton "Gazelle". The carrying capacity of the 302 relative to the base model was added by a dual-slope rear axle tire. The plans also included the UAZ-308, which differed from its ancestors with all-wheel drive, but nothing is known about its implementation even in an experimental version. The engine of all cars was supposed to be a 50-horsepower unit from the GAZ-M-20 "Pobeda". 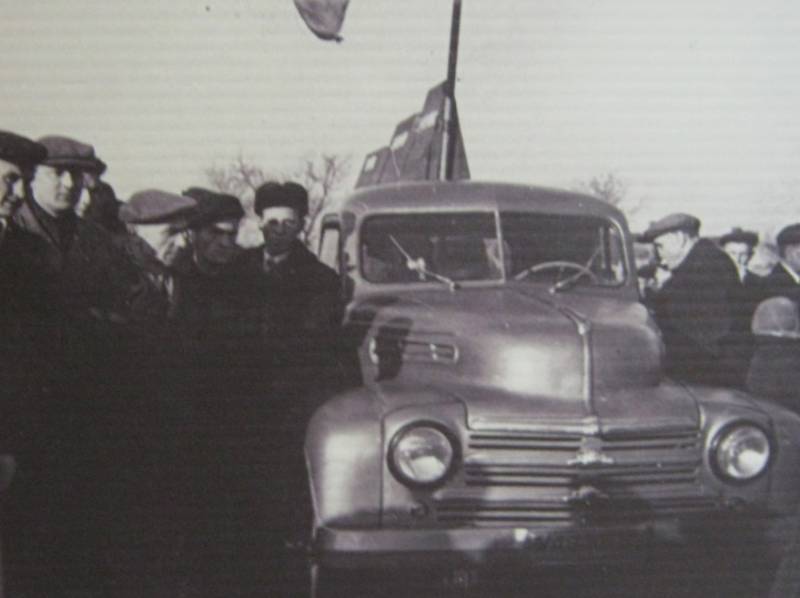 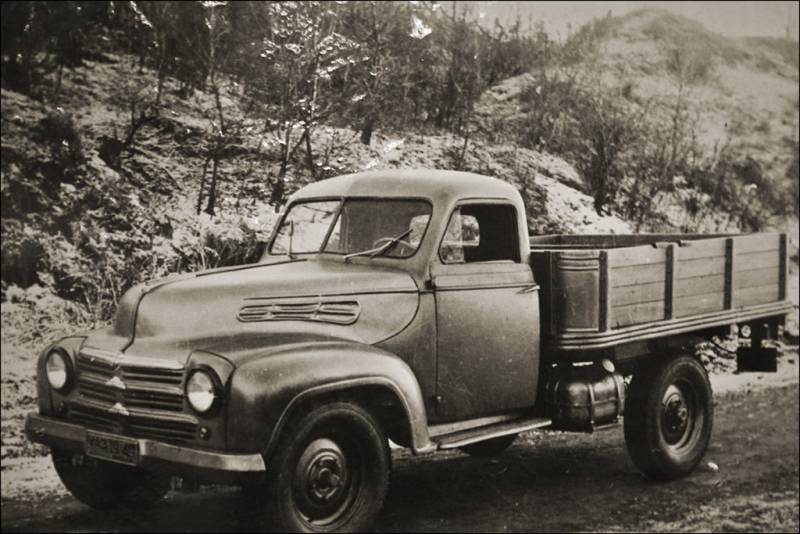 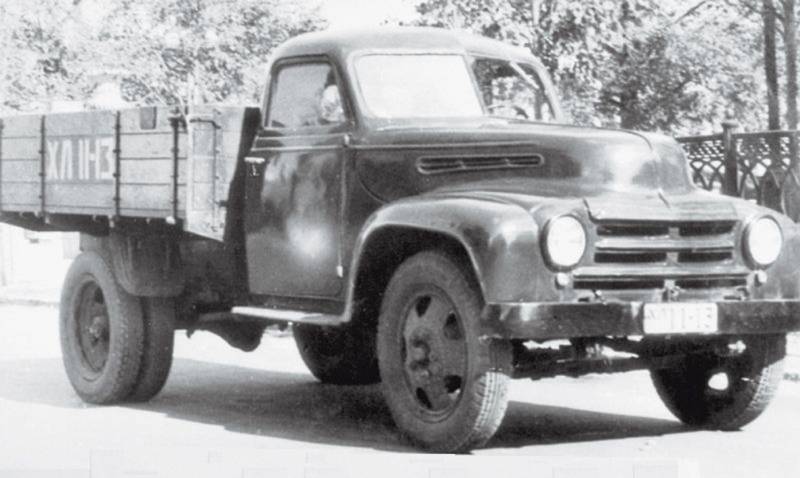 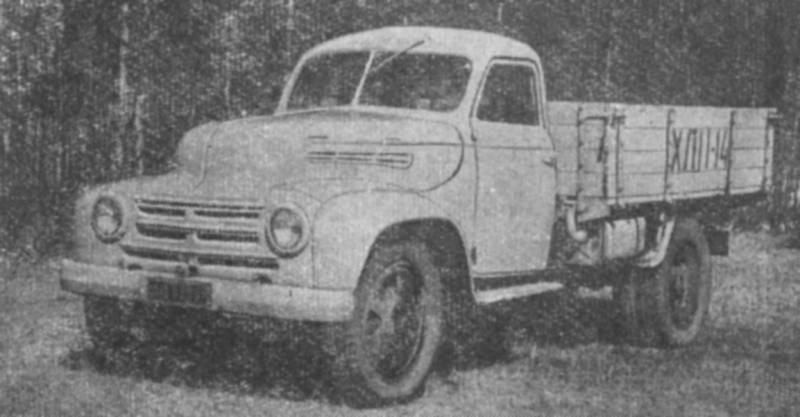 UAZ-300/302 family. Source: denisovets.ru
But the production plans were not destined to come true - in 1952 the UAZ was unexpectedly re-profiled for the assembly of ... SON-4 gun aiming radars. Even the company got a special name - "Plant No. 852". Of course, the entire staff of development engineers for new cars was dismissed.

The status of the automobile plant was returned to UAZ only in 1954, when the production of the Gorky all-terrain vehicle GAZ-69, which became the main product of the enterprise for many years, was transferred to Ulyanovsk. At this time, its own design bureau was revived under the leadership of Pyotr Ivanovich Muzyukin. The engineer was transferred to Ulyanovsk from Gorky, and it was he who oversaw the first independent development of the UAZ, which was serialized. These were trucks of the UAZ-450 wagon layout, the production of which was launched in 1956. By the way, the cars, practically unchanged, are still on the assembly line in Ulyanovsk - these are the oldest domestic cars that are still in production. Only now they are called "SGR Family" and are advertised in a very original way on the manufacturer's website:

"Passable, versatile, unpretentious and at the same time with the most simple design - a Kalashnikov assault rifle from the world of machines."

The Ulyanovsk people, of course, got excited about comparisons with the famous automatic rifle, but "Loafs", like the developments of Mikhail Timofeevich, are in demand abroad. 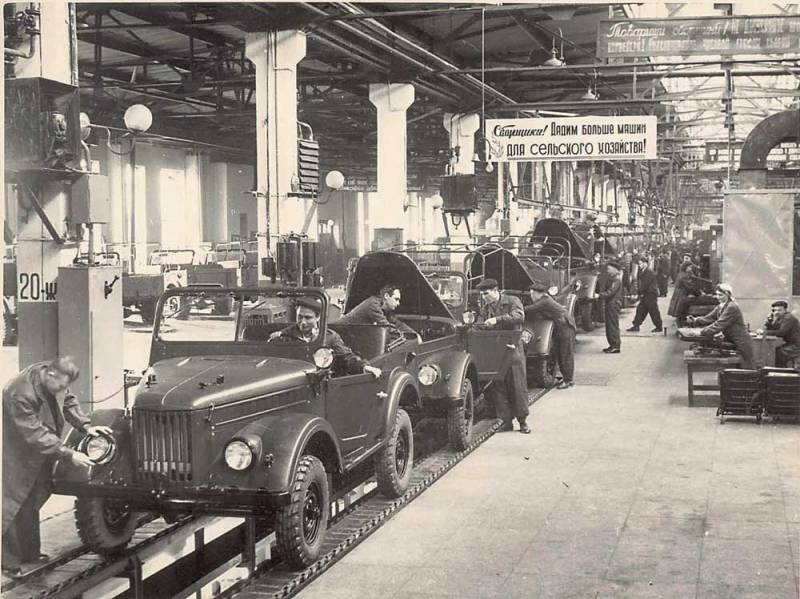 GAZ-69 on an assembly line in Ulyanovsk. Source: denisovets.ru 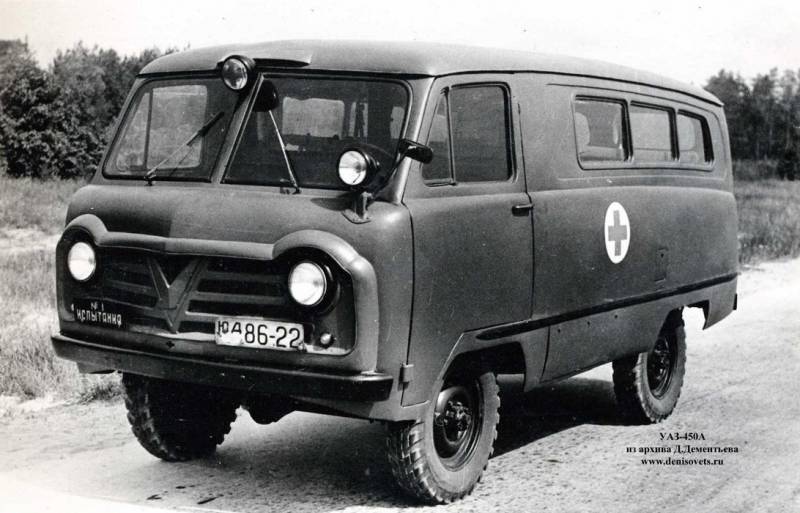 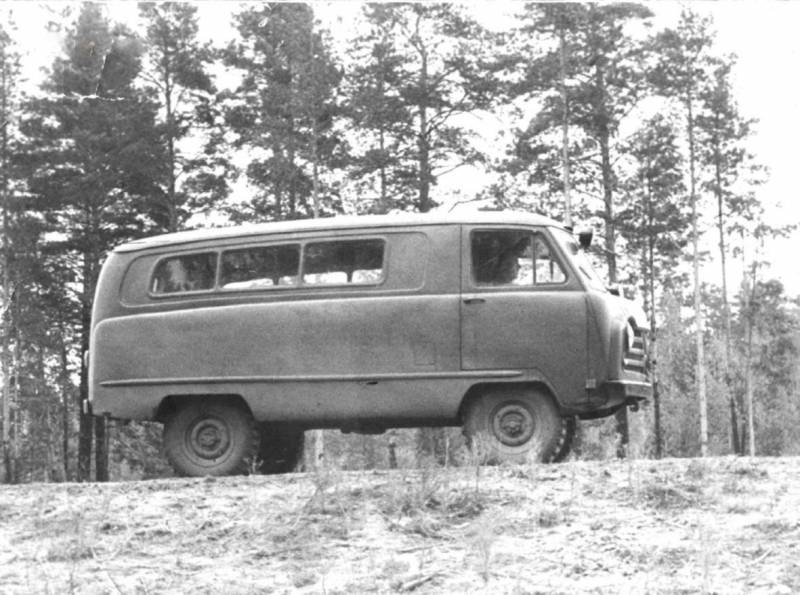 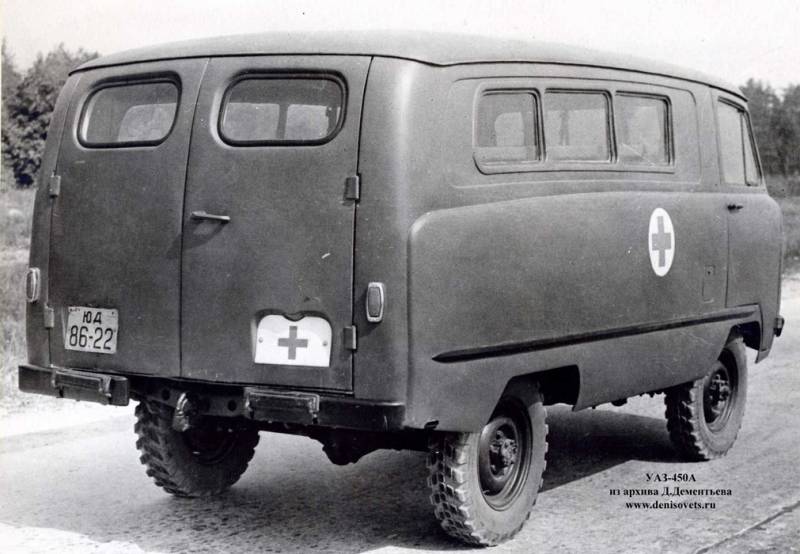 UAZ-450A. Source: denisovets.ru
RV lovers in Europe have appreciated the archaic charm of the UGR and are buying up dozens of cars a year. We see something similar with Ural motorcycles, the lion's share of which is sold to exotic lovers in the United States. In addition to Europe, SUVs are sold in regions where unpretentiousness and high cross-country ability are required from the car - these are Cuba, Chile, Laos, Mongolia, Kazakhstan, Belarus, Iraq and Myanmar. By the way, it was export deliveries that at one time forced UAZ to make changes to its models. Since 1959, the Ulyanovsk GAZ-69 has entered the markets of 22 countries at once, most of which were distinguished by a hot climate. The nitro paint used at the plant for car bodies was well suited to the climate of the USSR, but in the tropics it could not stand for a couple of years. As a result, the production process was transferred to hot-drying synthetic enamels, which increased both durability and quality of painting. True, in the first years of this cycle, only export modifications of the GAZ-69 were painted, all, without exception, the bodies were painted with "synthetics" only since 1964. Another example of domestic product segregation is the best abroad, and the rest, and sometimes illiquid, to our own. Ulyanovsk GAZ-69s have always had a notoriety for poorly assembled cars. However, the Indonesian termites loved them! In 1956, the first off-road vehicles entered the island state and were already in the port without wheels. Aggressive termites have eaten through the natural rubber of tires. The answer from Ulyanovsk was special tropical wheels, the taste of which no longer attracted insects.

Ctrl Enter
Noticed oshЫbku Highlight text and press. Ctrl + Enter
We are
Index 469: UAZ from sketch to steel model"The reliability of prototypes is low": the UAZ-469 makes its way into the series
Military Reviewin Yandex News
Military Reviewin Google News
84 comments
Information
Dear reader, to leave comments on the publication, you must sign in.