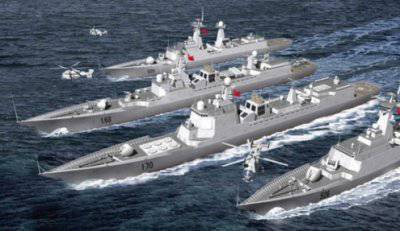 It would seem, why you need to start a serious diplomatic dispute over several patches of rocky land, which are lost in the open sea. We are talking about the Diaoyu Islands (Senkaku), which today are the objects of a sharp political conflict between Japan and China.

The dispute over the islands, perhaps, Beijing and Tokyo did not even begin to contrive, if it were not for the water area that is adjacent to the islands or, more likely, to small islands. The sea here is exceptionally rich in fish and other seafood, and the subsoil - in hydrocarbons. And if they knew about abundance of seafood in the local depths for a long time and, in principle, everyone who felt like it (both the Japanese, and Chinese, and Taiwanese fishermen), then they learned about the presence of large amounts of minerals relatively recently - in the seventies.

So, the problem of the richest natural reserves around these islands has recently become a pretext not only for diplomatic picks, but also for an open demonstration of the military force with which the PRC and Japan want to solve the territorial issue.

If we talk about stories Senkaku (Diaoyu or Diaoyu), whose name is translated into Russian as “fishermen’s islands” (“fishing islands”), then there are two versions to this effect.

The first version is Chinese. If we are guided by it, then it turns out that Diaoyu Islands were discovered by Chinese navigators in the second half of the 14th century, after which the same navigators marked them on their maps, which was the reason to consider the islands as Chinese. Official management was conducted not even from central China, but from Taipei. Such administrative affiliation persisted until the end of the 19th century, until Japan began the war against the Qing Empire. The reason for the start of the war was the fact that the Japanese wanted to get control of the Korean Peninsula, which by that time was under the rule of the last Chinese imperial dynasty. The result of this military conflict was the defeat of China and the signing of the so-called Shimonoseki treaty, which actually translated China into a cross between an independent country and a Japanese colony. Many Chinese historians call the agreement signed in the city of Shimonoseki a real humiliation for the country, because under the agreement China had to pay the Japanese a multimillion-dollar indemnity (in silver), give Liaodong peninsula, the island of Taiwan, along with which the very Diaoyu Islands, to which 1895, in principle, very few people paid serious attention. And if after the intervention in the Japanese-Chinese dispute between Russia, France and Germany, the Japanese had to abandon certain claims at the end of 1895, Japan’s control over Taiwan and Diaoyu, which became Senkaku, remained.

For exactly half a century, these territories were considered to be the Land of the Rising Sun, until it suffered a crushing defeat in the Second World War. After 2 September 1945, the control of the so-called Southern territories of Japan, which included Senkaku, was established by the Americans. But in the 70-ies there was a historical transfer of actual control over Okinawa (southern province of Japan) by the Americans to Tokyo. Chinese officials and historians say that such a transfer was illegal, because Japan was deprived of all the overseas territories it conquered by Japan, and the United States simply did not have the right to give such gifts.

The second version is Japanese. Tokyo, in principle, does not dispute the fact that Diaoyu Dao was discovered by Chinese navigators, but they say that the main milestone in Senkaku history should be considered the 1895 year, when the Land of the Rising Sun won the war from the Middle Kingdom, and therefore gained possession of the islands. But the results of the Second World War, Japan is not inclined to consider ...

Understanding that today it is time to take the "bull", or rather the Senkaku Islands, "by the horns", in Tokyo decided to use a very original move. It turns out that all the last time the disputed islands were in private hands. They were owned by representatives of the influential family in Japan - Kurihara. What these Kuriharas did on these tiny rocky islands, located more than 400 kilometers from Okinawa prefecture, is not reported, but it is reported that the authorities rented several islands of the mini-archipelago Senkaku from Kurihar for about 314 thousand dollars a year for fishing here. So, in order to show the Chinese that today only Japan can own Senkaku, the official Tokyo decided to pay a little more than 26,2 million dollars to the masters of Kurihar and thus simply buy the islands. They say that Beijing will immediately cool down if it finds out - now our islands are exactly ours, because we are about to buy them.

True, such a commercial move by the Japanese authorities did not really cool down the fervor of the Chinese. Instead of (as the Japanese thought) leaving their claims to Senkaku, Beijing took, and sent to a couple of the already purchased islands a couple of patrol ships of the Navy. Now, they say, and see who is the owner of the islands ...

After the advent of Chinese warships fleet from Tokyo, words were heard that Beijing was violating international law and trying to encroach on the territorial integrity of Japan. However, a few days before the appearance of the Chinese military courts, boats of the Japanese police and border guards sailed in these disputed waters, and what the Chinese called an encroachment on the territorial integrity of the PRC.

Apparently, the words of the Japanese and Chinese leaders, said at the APEC summit in Vladivostok that the problem should be solved by joint efforts, Hu Jintao and Yoshihiko Noda themselves forgot immediately after returning home. It is noteworthy that Japanese Foreign Minister Koichiro Gamba said in a very non-diplomatic tone that Tokyo would not surrender Senkaku under any circumstances.

Obviously, those same rocky scraps of land, lost in the sea, may be the cause of an even larger conflict in the near future. If we consider that each of the parties is not going to give in, then the conflict will most likely turn into a sluggish process with manifestations of a certain kind of provocation and demonstration of its rule on the islands from one side or the other. Naturally, it is unlikely that anyone will bring the matter to open fighting, which means that the problem will remain tense for a long time.

Without trying to take anyone’s (Japanese or Chinese) position on this issue, one can say the following: I found a scythe on a stone. Japan, which recognizes the results of the 1895 war of the year, which ended in victory for it, strangely does not recognize the results of the Second World War, the defeat in which deprived it of its claims not only to the South, but also to the Northern Territories (the Kuril Islands). The striking selectivity ... And in this respect, China in general can be called a country which, due to its often unsupported territorial ambitions, can be entered into the world book of records. Who will be more durable: a stone or spit - a question from the category of philosophical ...