Is there a big strategy in Russia?

The question of whether there is a so-called big strategy in the Russian Federation is very interesting. The West has traditionally rooted the view that the Russian leadership has some deeply thought-out, purposeful, and comprehensive strategic plans that determine foreign policy and military construction for the long term.

Such plans were attributed by Western observers to all Russian emperors without exception - from Peter I to Nicholas II and to all Soviet leaders - from Lenin to Gorbachev. Accordingly, any actions of Russia and the USSR were interpreted as corresponding to some profound long-term plans - even the most reflex and improvised, such as, for example, the introduction of troops into Afghanistan in the 1979 year.

This trend continues to live in the West, and now, good, Vladimir Putin’s purposeful authoritarian style in politics creates an atmosphere that allegedly has a long-term vision with the current Russian leadership. On the other hand, it was under Putin that there were indeed very active attempts to formulate a long-term strategy for the development of Russia both in the economy and in security policy. Although, undoubtedly, these attempts are largely a consequence of the ideological support of Putin’s aspiration to transform his power into lifelong, but they still reflect the intention to form some kind of strategic vision.

Nevertheless, in my opinion, now in Russia in the field of strategic planning there is a rather ambiguous situation, generally characteristic of the Russian storiesHowever, it is most clearly manifested in the Putin political system. This situation consists in the fact that the real domestic security policy is very poorly formalized, and accordingly all formalized schemes and texts designed to formulate this policy for the present and the future are rather conditional, sketchy and divorced from real activity. This fully applies to all sorts of doctrines, strategies, plans and concepts, abundantly released by the Russian authorities in the last decade, not excluding the last two mentioned supposedly "fundamental" documents (National Security Strategy and Military Doctrine). Therefore, it should be well understood that these formalized documents are not at all decisive for the actions of the Russian leadership, but are rather political and propaganda (or, more precisely, benevolent). 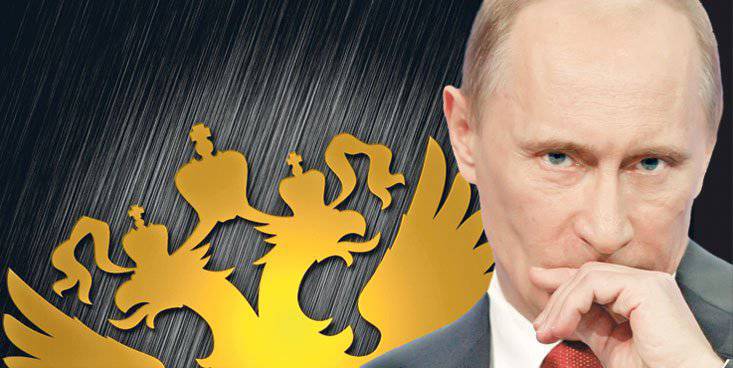 The real Russian strategy of action (if the term “strategy” can be applied to it at all) is defined as a bizarre compromise between the actions of various factors, groups of influence and other things and in many ways represents a kind of zigzagging between the declared objectives and plans and harsh reality. Russian politics has been and under Putin continues to remain predominantly reactive, following events, reacting to external factors and difficult to describe in terms of long-term planning. The personal qualities of Vladimir Putin, about which runaway oligarch Boris Berezovsky put it in the sense that "Putin is good at using situations, but cannot create situations, contribute to this." Hence the de facto general prevalence of tactics over strategy in Putin’s policy.

On the other hand, it is difficult not to see that Putin, at the same time, has some rather stable sum of views on the character of the Russian state and its policies, and that Putin’s foreign and defense policy is based on some relatively solid ideas. However, it is precisely these views that are still not very formalized and, apparently, can only be partially reconstructed.

Finally, it is worth pointing out that Putin’s vision is partly opportunistic in nature, based on the sentiments of a large majority of the Russian population. Putin rather follows these sentiments, rather than defining them. Putin's views largely correspond to the current consensus on security policy among the Russian population and Russian elites. This to a large extent contributed to the breadth of Putin’s support in the past decade, during the period of the so-called Putin majority. And it is significant that even now, during the collapse of this “Putin majority”, foreign policy and security policy issues are practically not the subject of serious discussion in Russia and are not particularly challenged even by opposition groups and political figures (except for the very unbridled marginal ultra-liberals).

In general, speaking even more broadly, it can be said that in Russia today we observe several main sources of shaping the main directions of the security policy:


If it is possible to speak of the existence of a “big strategy” in Russia, then this “big strategy” is a kind of integrated resultant of these sources, and therefore it makes sense to try to give a description of this resultant. Thus, here we are talking about trying to sort of “reconstruct” the current Russian “big strategy” and to highlight the main elements that make it possible to understand the logic of the political elite of the country when making certain security decisions. We will focus precisely on the military aspects of the problematic.

Russian consensus and its contradictions

It is quite obvious that in the last decade and a half in Russia a national consensus has gradually been forming on the goals and objectives of state-building. With this vision, the fundamental national goal can be called the restoration of Russia as a great power in economic, political and military terms. At the same time, an important aspect of this vision is the consciousness of the Russian elite of the need for a radical modernization of the country precisely for the revival of its great-power status. 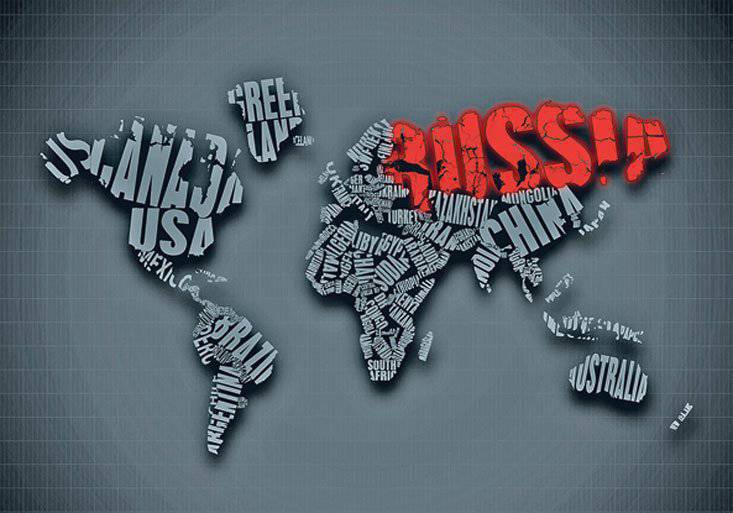 Actually, it is the interpretations of this formula that create the basis for determining the main directions of military construction, the main tasks of the Armed Forces of Russia, possible threats and possible opponents.

The main problem of the Russian security policy in this context is that this striving is in conflict with the policies of the United States and the West, which objectively, in principle, do not favor Russia’s strengthening economically, politically, and militarily. On the other hand, both Russia and the West are interested in economic and political cooperation, and the West is the main resource of modernization for Russia.

This predetermines the entire current ambiguous nature of the military-political relations between Russia and the West, when both sides are pursuing a contradictory policy of "friendliness and deterrence" regarding each other. Objectively, on the one hand, Russia looks to the West as the main resource for modernization, and on the other, the United States and the West are simultaneously (and often justifiably) considered to be the main external obstacles to national reconstruction and modernization and therefore are still identified as potential adversaries. Russia.

An additional complicating factor in this context is Russia's relations with its closest neighbors. It can be said that in general none of the states bordering on the Russian Federation (including most of the republics of the former USSR) are in principle interested in the revival of Russia. This circumstance is the main reason for their unbridled pro-Western orientation, their desire to join NATO, and so on. Nationalist post-Soviet formations (primarily the Baltic states, Ukraine and Georgia) in essence now represent the main immediate problem for the security of our country. Therefore, the Russian Federation is partly forced to consider almost all the states bordering on it as potential adversaries to one degree or another.

On the other hand, it is completely obvious that the republics of the former USSR are a natural sphere of Russia's national interests. They are connected by a myriad of social, political and economic threads with the Russian Federation. Therefore, from the point of view of the domestic elite, the revival of Russia as a great power is impossible without the preservation of Russian influence (and preferably domination) in the former Soviet republics. The forms and methods of this influence are a matter of separate discussion. However, it is clear that the preservation of this impact is impossible without breaking the current anti-Russian tendencies in the domestic and foreign policy of these republics and without restricting Western intervention in what Moscow interprets as a “historical zone of Russian interests”.

Finally, for Russia, the threat of terrorism and separatism persists.

Based on the above, it can be concluded that Russia faces three main types of military threats (in terms of probability):

At the same time, the first threat is considered to be conflicts of the first type, which has been vividly embodied in the direction of military reform conducted since 2008 under the leadership of the defense minister Serdyukov. Its essence lies in the transformation of the Armed Forces of Russia from the traditional mobilization system to the forces of constant full combat readiness. The fundamental conceptual basis of military reform is the reorientation of the Russian Armed Forces of the new look to participate mainly in limited conflicts, such as the five-day campaign of 2008 against the Georgia. The new structure of the Russian Armed Forces is being built up for these tasks - the Armed Forces should be more flexible, mobile, constantly combat-ready, capable of quick response and engaging primarily in limited conflicts in the territory of the Russian Federation and other states of the former USSR, as well as adjacent territories.

It should be particularly noted that Russia maintains and will maintain in the foreseeable future the full military superiority over the former post-Soviet states, ensuring its military-strategic domination in the territory of the former USSR. As for the military threat from the West, then, as can be judged, the main type of such threat is the possibility of political and military intervention in conflicts in the post-Soviet space by Western countries. Such intervention is seen as the main threat to the national goals of Russia in Eurasia.

Attention should be paid to one more aspect. The concept of a “multipolar world”, so actively promoted by Russia, is in itself a priori conflict, providing the world with the game of “free forces”, including the force ones. "Many poles" on the planet will inevitably compete with each other and try to surround themselves with their own spheres of influence. This means that Russia must be morally ready to fight for its position and must have a sufficiently powerful military potential to rely on it in this fight. Certainly, taking into account Russian military and industrial capabilities, stable imperial traditions and the unique geopolitical position in the center of Eurasia, the Russian Federation is much more capable than other nations to acquire the position of one of the most powerful powers. Therefore, from the point of view of Moscow, the multipolar world (and even partly geopolitical chaos) is beneficial for Russia, creating unique opportunities to promote Russian interests.

At the same time, the Russian Federation is simultaneously pursuing a policy of expanding ties with Western countries, and is no longer in a state of ideological confrontation with the West. Finally, Moscow is forced to reckon with the rise of new forces on the world stage — first and foremost China.

The combination of these factors, therefore, forces Russia to conduct multi-vector military construction, preparing to repel a wide range of threats and prepare in parallel for the most diverse types of conflicts - from counterinsurgency and interventions in the former Soviet republics to possible large-scale conventional land war with NATO or China and global nuclear war with the United States. Undoubtedly, such a multi-vector approach creates enormous problems for the development of the Armed Forces of Russia and for defense planning, especially in combination with the vast territory of the Russian Federation and the length of its borders and in the conditions of the continuing lack of resources.

Thus, the main immediate objectives of the Russian military construction can be identified: