Synthetic liquid fuels in Germany: past experiences and new technologies 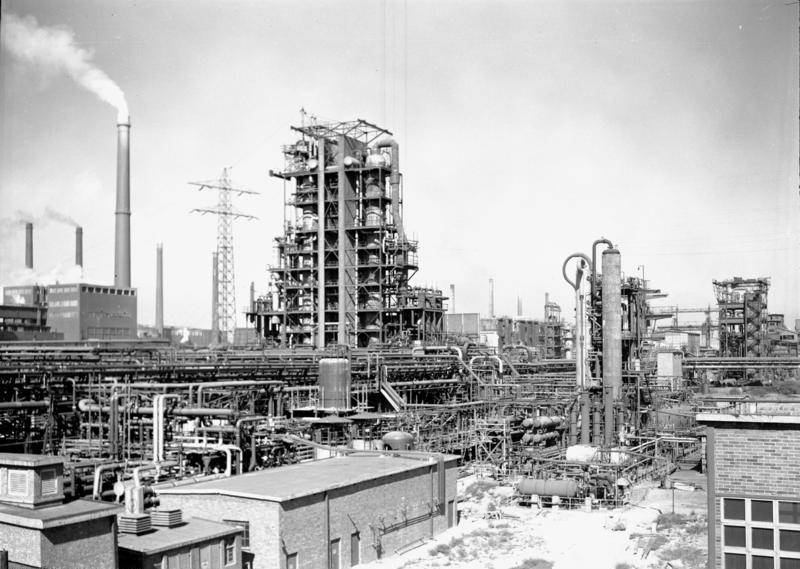 Leuna-Werke plant, one of the main producers of synthetic gasoline. Photo of the Bundesarchive of the Federal Republic of Germany

There are oil fields in Germany, but their volume is very limited. As a result, the country is seriously dependent on the supply of imported oil and petroleum products, which can threaten national security. In the distant past, the problem of dependence was solved by the production of synthetic liquid fuels from available raw materials. Now technologies of a similar purpose are being offered to improve the environment.

The search for alternative methods of obtaining liquid fuel to replace petroleum products began in the tenth years of the XX century. The first technology suitable for mass use was proposed in 1913 by the future Nobel laureate Friedrich Bergius. Two years later, he built and launched the first plant using the new process. Subsequently, the rights to use the berginization method were acquired by larger enterprises.

The Bergius process involved the use of coal or lignite as raw materials. The crushed raw material was mixed with a set of special additives and catalysts, and a suspension was made from it. The latter was mixed with hydrogen, also obtained using coal, and then fed into chemical reactors, where temperatures were maintained up to 450-485 ° C and pressures up to 500-700 atm.

The output produced synthetic crude oil - a mixture of gas oil, diesel fuel, several gases and other components. This intermediate product was then processed to recover medium and heavy oils, gasoline and gases. 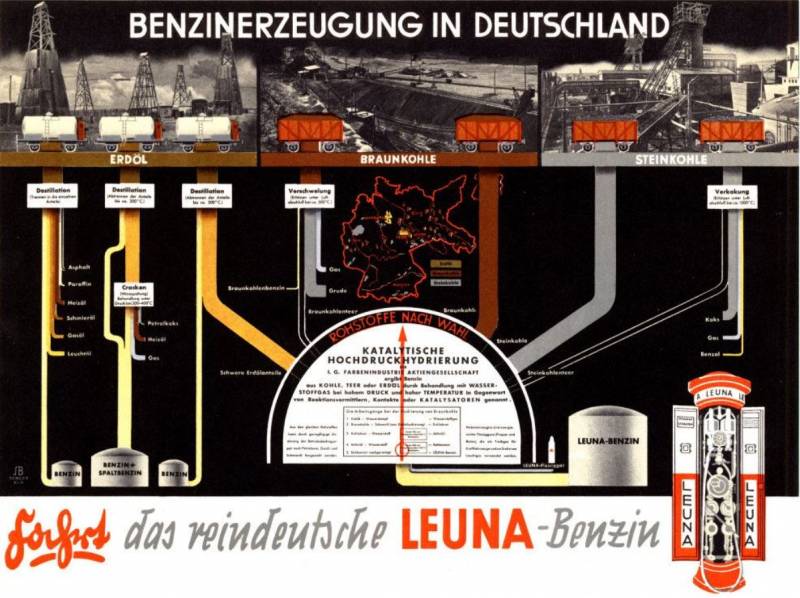 Gasoline advertisement from Leuna-Werke. Graphics LW / Wikimedia Commons
In 1926, chemists Franz Fischer and Hans Tropsch proposed an alternative technology that had its advantages. So, it made it possible to use both hard coal and brown coal, which Germany had in large quantities, as raw materials. By the end of the twenties, the so-called. the Fischer-Tropsch process was mastered by various enterprises and provided the country with the necessary fuel. At the same time, various ways of improving the technology were proposed.

The Fischer-Tropsch process began with the development of the so-called. synthesis gas or water gas - a mixture of carbon monoxide and hydrogen. It was obtained by treating crushed coal with superheated steam. Synthesis gas could be obtained in other ways. It could be immediately used in internal combustion engines. Also, by mixing with other substances, synthesis gas was converted into liquid fuel. The technology made it possible to obtain different types of fuel, but only synthetic gasoline was economically justified.

The Bergius process has been used in industry since the mid-tenths, and 10-12 years later, the introduction of the Fischer-Tropsch method began. Both technologies, in their original and modified form, showed themselves well and made a certain contribution to providing the national economy and the army with liquid fuel. However, the share of synthetic gasolines and oils in the total consumption of Germany remained insignificant until a certain time. During that period, the country relied on the purchase of foreign oil and petroleum products. 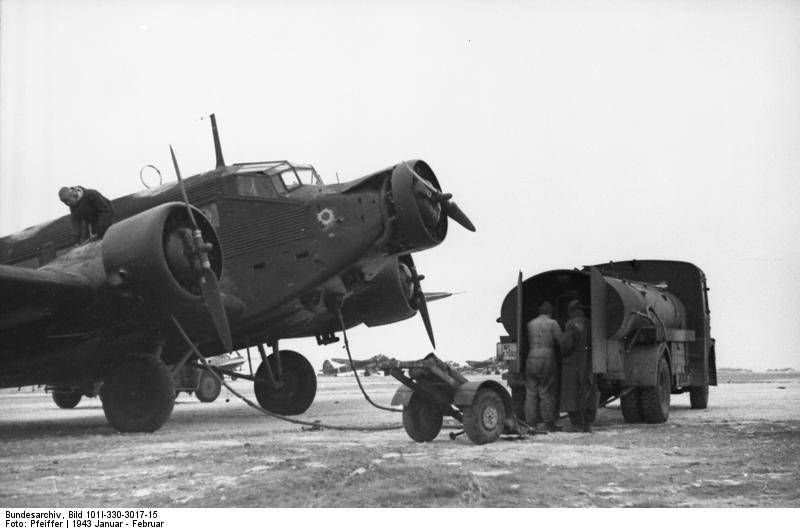 One of the main consumers of gasoline in Nazi Germany was the Luftwaffe. Photo of the Bundesarchive of the Federal Republic of Germany
The situation began to change with the coming to power of the Nazis. In 1936, a program for the development of synthetic fuel production was adopted. It was planned to build several new factories operating in two main processes. They were supposed to increase the total output of fuel, while reducing the need for imports. All large organizations from the IG Farben conglomerate were involved in the work.

The first factories of the new construction started working in 1938, they used "berginization". In 1939, several factories were launched using the Fischer-Tropsch method. Already in 1940, the production of new fuel reached the level of 70-80 thousand barrels per day. This was enough to cover a third of the country's needs at that time. Subsequently, the industry's indicators increased. Their peak was in 1944, when 25 plants together produced 5,7 million tons of fuel. At the same time, production was not very economical. The record annual fuel output required the use of about 60 million tons of coal.

Along with production, the need for workers grew. Since 1941, this problem has been solved through slave labor. Prisoners of war and prisoners of concentration camps became factory workers. The Nazis did not even think about improving working conditions or observing safety precautions. As a result, a significant part of the forced laborers died from poisoning and injuries, while others undermined their health.

In May 1944 the British aviation began regular strikes on factories and storage facilities for synthetic fuels in Germany and the occupied territories. The bombing raids over several months caused irreparable damage to the industry and also contributed to the deterioration of the position of the Nazis. In the spring of 1945, the remaining synthetic fuel plants ceased operations. The winning countries were banned from restoring this production. 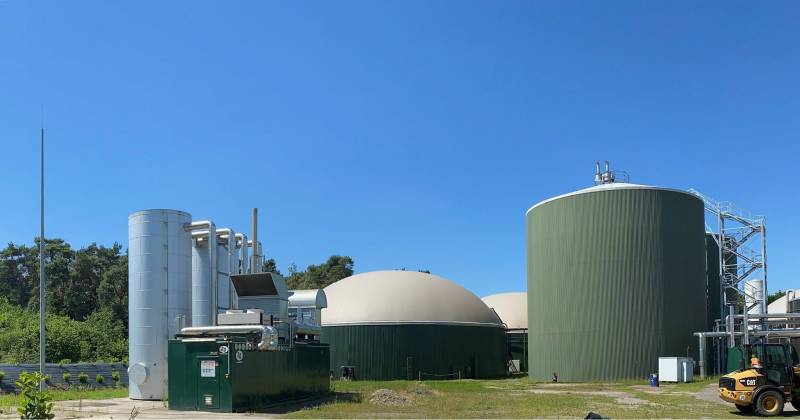 In the post-war period, both Germany gained access to foreign oil and could receive it in the required quantities. Own deposits were also explored and developed. All this as a whole covered the needs of the Federal Republic of Germany and the German Democratic Republic in liquid fuel, and also made it possible for many years not to even remember the production of synthetic fuels.

However, fusion technologies have attracted attention again, but not for economic reasons. Now they must contribute to the improvement of the ecological situation. The German non-profit group Atmosfair, with the assistance of the Federal Ministry of the Environment, Siemens and a number of other organizations, has developed and implemented a project for a "green" plant for the production of aviation kerosene. The plant was built in the commune of Werlte (Lower Saxony) and has recently started operations.

The plant should use the improved Fischer-Tropsch process. Carbon dioxide from the atmosphere and from a biogas plant is used as a raw material for the production of synthetic oil. Hydrogen will be produced by electrolysis from the water of local reservoirs. The enterprise receives electricity from the nearest wind farm. The resulting crude oil is distilled into aviation kerosene.

By the beginning of 2022, the Atmosfair plant should reach its design capacity - about 8 barrels of kerosene per day. Such fuel will cost approx. 5 euros per liter, significantly more than "simple" kerosene. However, the authors of the project are pushing for its environmental benefits. They indicate that the raw materials and energy for the production of fuels are taken from the environment. Due to this, when kerosene is burned, the same amount of carbon is emitted into the atmosphere as was used during the production stage. The balance of substances does not change, which is beneficial for nature. 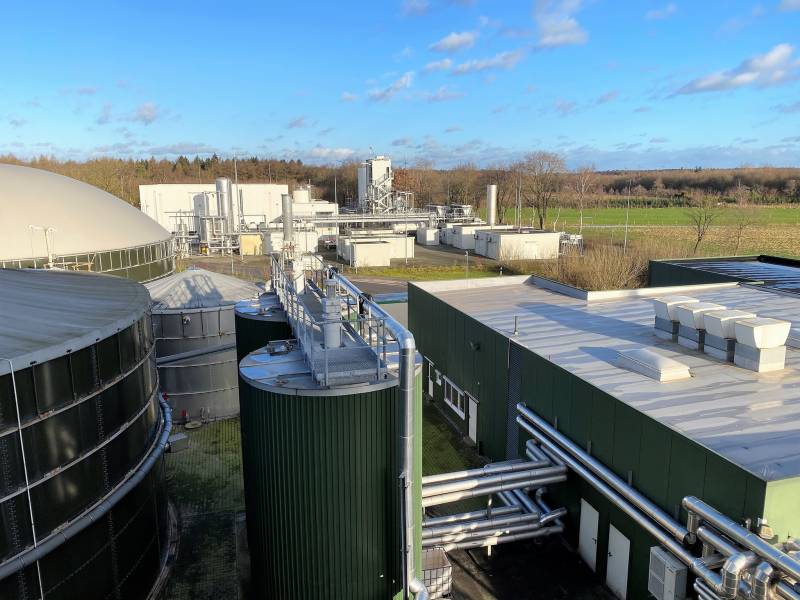 Whether the plant will be able to bypass competitors is a big question. Atmostar Photos
Atmostar believes that the new synthetic fuel will become economically viable in the future. However, for this, it is necessary to introduce additional taxes on fossil fuels, so that it will rise in price to the required level. Under such conditions, synthetic kerosene will become competitive and attract investors. It will also be possible to expand production, incl. with the release of new types of products.

Thus, over the past little century, Germany has accumulated a large scientific and technological experience in the production of synthetic liquid fuels and the replacement of traditional petroleum products. In the distant past, the need for such technologies actually disappeared, but now it is proposed to revive them, moreover, on a new basis and with a different ideological rationale.

Recent ones news green plant are of some interest, but are unlikely to attract the attention of fuel buyers or investors. Despite all the original ideas, Atmosfair kerosene is not economically viable and cannot compete with fossil oil fuels.

The situation can change in his favor only with the introduction of new unfair restrictions capable of hitting existing enterprises and their clients. Time will tell whether Germany will sacrifice its existing industry and infrastructure for the sake of current environmental ideas.