12 September 2012
23
Avro Vulcan is the second aircraft in the V series. And today the “flying wing” scheme applied gives the aircraft a modern look. The creation of the long-range bomber began at the beginning of 1947. The main developer is the British firm Avro. The new aircraft should have been built according to the requirements of “35 / 46” from 09.01.1947. 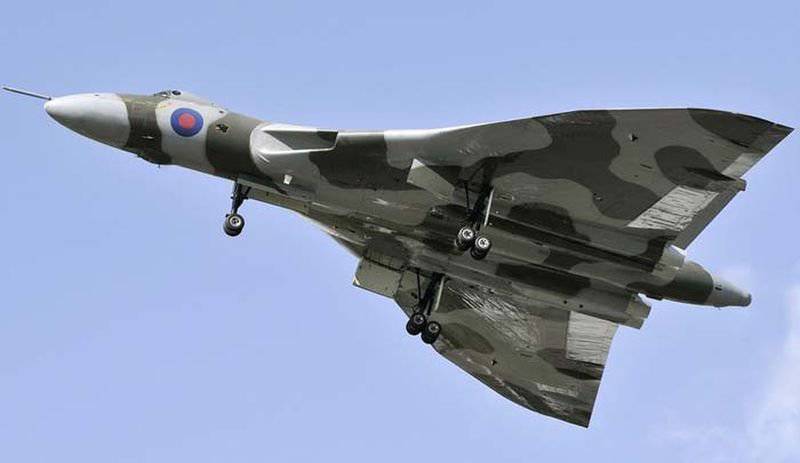 Work on the creation of a long-range bomber was based on captured documents and materials (Germany) for high-velocity aerodynamic apparatus. They formed the basis for the formation of the appearance of a strategic bomber.

At the beginning of the plane planned to create a normal aerodynamic configuration with a large sweep wing. But such a layout did not allow designers to invest in the specified characteristics. The decision is made to remove the horizontal tail and shorten the fuselage. The following changes in the layout of the aircraft lead him to the "tailless" scheme and the triangular wing of a thick profile. The wing provided the necessary capacity for air bombs, onboard equipment, units and fuel while maintaining aerodynamic characteristics.

In the spring of 1947, the design studies of the new bomber were completed and under the designation “Type 689” he was offered for construction. In the fall of 1947, after a “hot” debate about this model of bomber, Avro received the go-ahead for full-scale work. Perhaps, the decision to build the aircraft was influenced by American similar developments of YB-49 and XB-35.

However, when building a plane with a triangular wing, there was an unexplored area of ​​use of this scheme at low speeds and take-off / landing. Therefore, before building a prototype of a new aircraft, a decision is made to manufacture a small sample with a TRD. With further work on the project "Type 698" was revised and modified glider. In the second half of 1948, the aircraft model was built with an improved glider. Small analogue received the designation "Type 707" - reduced in 3 times "Type 698". TRD Derwent from Rolls-Royce was installed in its tail section. "Type 707" first rose in the sky 4.09.1949 of the year. He managed to make five sorties and as a result of an accident in the electrical circuit he crashed and completely collapsed. 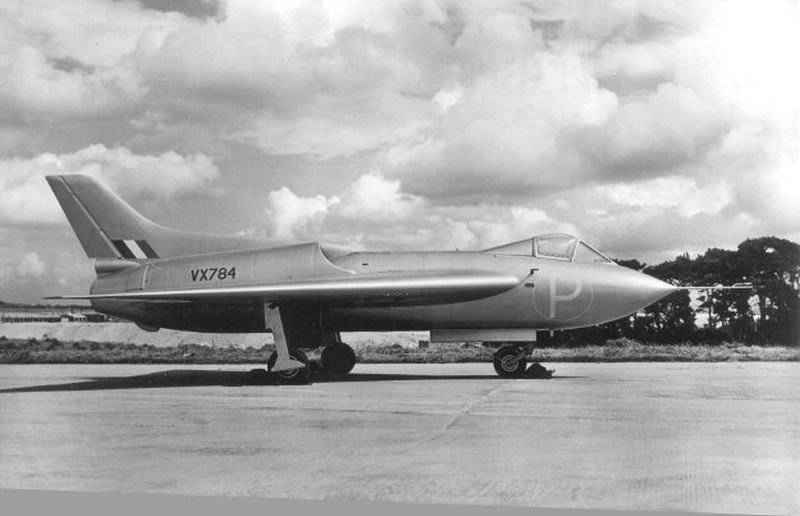 6.09.1950 of the year, the next prototype 707В rises to the sky, receiving changes based on tests of the first specimen (extended nose landing gear). The sample successfully made about 380 flights in two years, having flown more than 130 hours. 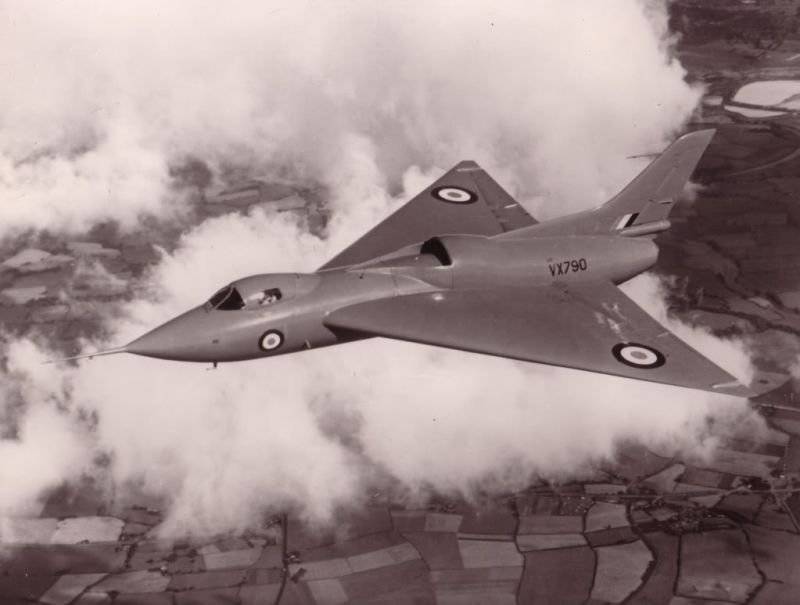 To study the design of the delta wing at high speeds and the configuration of installed air intakes (the final version was designed at the beginning of 1951 of the year), a third sample of the 707A was built. The first flight took place in the middle of the year 1951. The plane successfully flew 92 hours, making 197 flights.

1.07.1953, the fourth aircraft in the series of small analogues under the designation "707С" rises into the sky. The main differences from the "707A" - set double cab and dual control of the machine. It was intended to train future pilots of new long-range bombers. These "miniature copies" of the future Avro Vulcan made an invaluable contribution to the development of the project - it was the 707С flights that were covered in the press that proved to the doubters that the chosen scheme (the delta wing) was correct when creating the new aircraft. Another equally important merit of “707С” - pilot training on them was much faster than on the “big brother” and with less expenses. They continued to be used even during the creation and testing of the Avro Vulcan prototype. 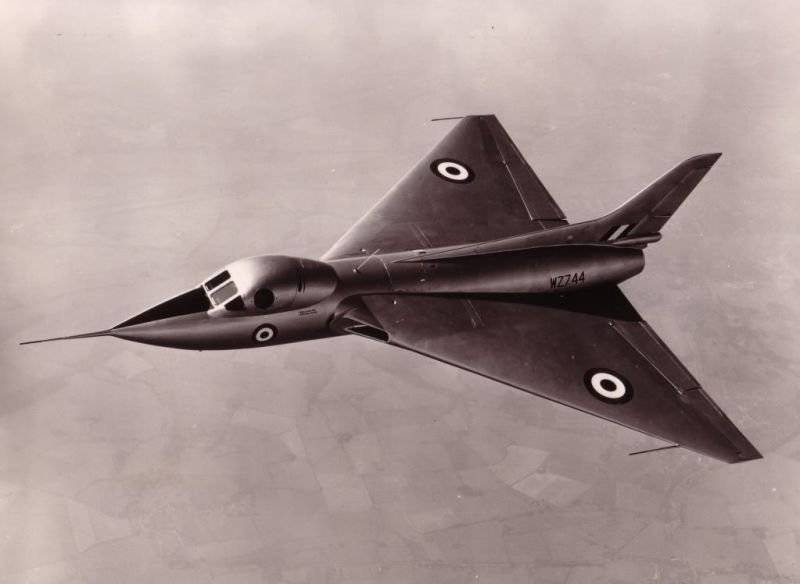 The technical design of the aircraft "Type 698" finished by 1949 year. Appearance by this time the aircraft has changed dramatically. The weight of the airframe increased, only one standard carriage was used and air intakes were installed in the leading edges of the wing. The first prototype under the designation “VX-770” began to be built in the 1950 year. He first climbed into the sky 30.08.1952 of the year. Because of the unavailability of engines for the bomber used 4 TRD "Avon" from the company "Rolls-Royce." To speed up the prototype prototype tests, a simplified fuel system and fuel tank were installed in the bomb bay. After the test began, the “Type 698” aircraft was called “Avro Vulcan”. At first, the prototype was used to determine the handling characteristics at high altitude. During the 6 months, the aircraft made an 32 flight, after which the engines were replaced. Sapphires (Sa6) were installed with an increased burden and other equipment designed specifically for installation in a new aircraft. In the middle of 1953, the aircraft resumed test flights. In July, work began on the creation of the first Vulcan bomber Mk.1. 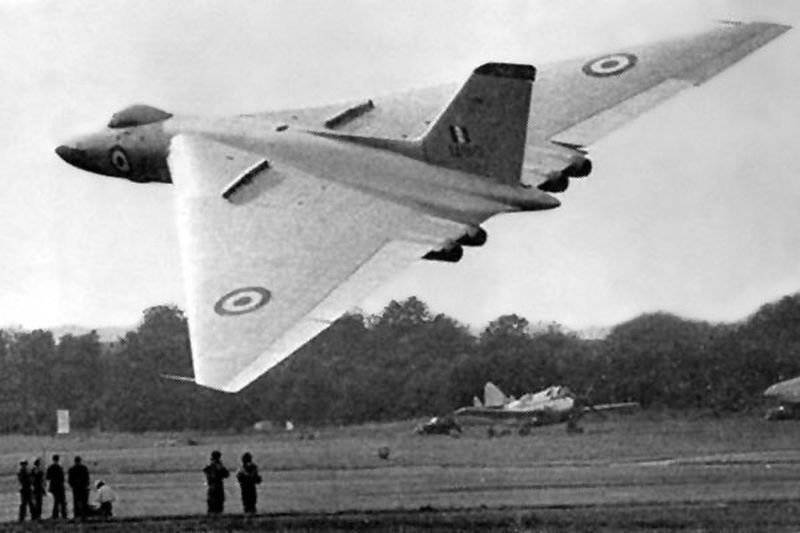 In early September, 1953 of the year made the first flight of the second prototype of the VX-777 with the installed Olimp-100 engines. In the middle of 1954, it breaks down when landing. The Olympus-101 engines are installed on the aircraft being repaired and the airframe is strengthened.

In the middle of 1955, the prototype was again upgraded because of the identified buffets - the wing increased inrush, which increased the sweep angle and reduced the Su ratio to 1.3 (1.56). This pushed back the line of buffing at the angles of attack.

The serial long-range bomber "Vulcan B Mk.1" for the first time rises into the sky at the beginning of 1955. It had the Olimp-100 engines installed and the non-modernized wing. After a series of tests, the aircraft is being revised - the wing is being modernized, the new Olimp-102 engines, the H2S radar and the automatic stability system are installed. All of the following serial bombers produced in the improved wing and avionics. 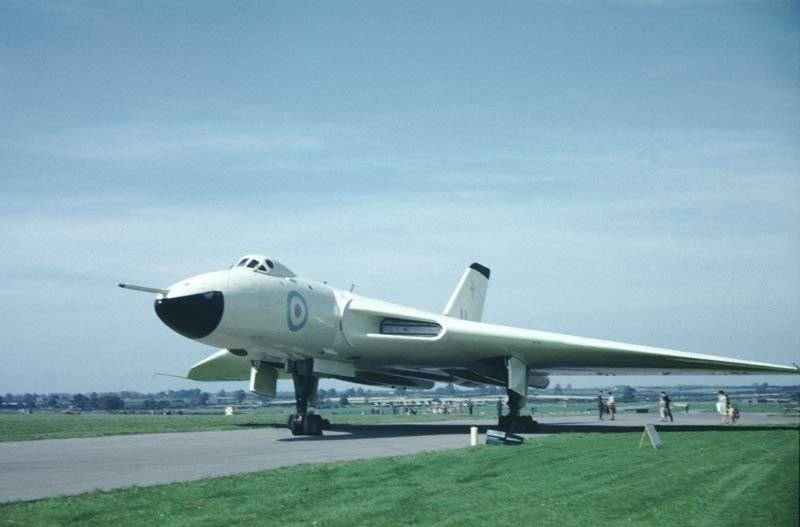 The third mass-produced aircraft received a modification of the wing and a system for filling fuel tanks with neutral gas. The fourth "serial" has already been released in full weapons, and it also conducted flight tests of weapons. By the middle of 1955, the aircraft receives a flight certificate of fitness. The total number of issued "Avro Vulcan B Mk.1." - 45 units. The British Air Force launched new long-range bombers at the end of 1956. The first combat squadron was formed by the summer of 1957. They became one of the most advanced aircraft of their time - superior to the American and Soviet counterparts. This was achieved to some extent by the abandonment of defensive weapons. Held in October 1957, joint competitions in the United States revealed another remarkable “feature” of British strategic bombers - they were barely noticeable on American radars (instead of bombers, they were classified as fighters).

At the beginning of the 1960-s, bombers receive new equipment - active and passive-type REPs. Aircraft that received new equipment, receive the designation "Avro Vulcan B Mk.1A".

In the 1955 year, work began on modifying the bomber. To test the new developments using the prototype "VX-777". In 1957, the wing is changed for the third time. Modification of avionics was tested on the prototype "VX-770". The first experienced serial bomber under the designation “Avro Vulcan B Mk.2” was built by the middle of the 1958 of the year. The main differences from Mk.1:
- the wing gets a visible conical twist;
- the back part of an edge is extended with giving of the last small sweep;
- use elevons instead of elevators and ailerons;
- installed new engines;
- the tail part of the fuselage is extended (the REB facilities are installed);
- modernized electrical system;
- enhanced chassis;
- increased the effective area of ​​the air intakes; 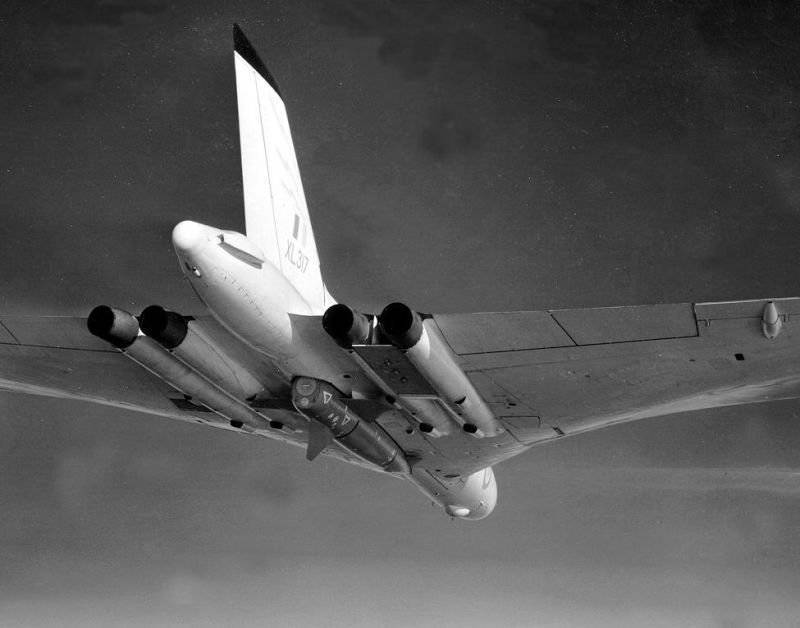 The first aircraft "Vulcan B Mk.2" are introduced into the Royal Air Force in the middle of the year 1960. The main armament is the Blu steel cruise missiles. They were already hung under the fuselage. The rockets were raw and were a necessary temporary measure. It was planned to arm bombers in the future with American-made GAM-87A missiles. However, American designers have stopped the creation of the GAM-87A APR - the United States military leadership decides that the missiles do not meet the main criterion of "cost-effectiveness". Before 1970, the second line of Avro Vulcan B was equipped with unsatisfactory Blu steel rockets.

After adopting nuclear submarines with the Polaris A3 BR, strategic bombers re-equip free-fall nuclear bombs. Aircraft began to develop small heights. This led 1979 to change the color of the aircraft from brilliant white to gray-green camouflage. A little later, the nose of the bombers acquired a “thimble” - they installed a radar station to support the flight around the terrain with the data output on the pilot indicator. Bombers began to arm and conventional bombs - 21 caliber 450 aerial bomb kilogram.

Use of long-range bombers
In a military conflict with Argentina, 1982 used six Avro Vulcan B Mk.2, converted into tankers under the designation Avro Vulcan K Mk.2. Aircraft received the ventral equipment refueling "hose-cone." Some of them were armed with guided PRR "Shrike". Four missiles were suspended by the APR type “Blu steel”. 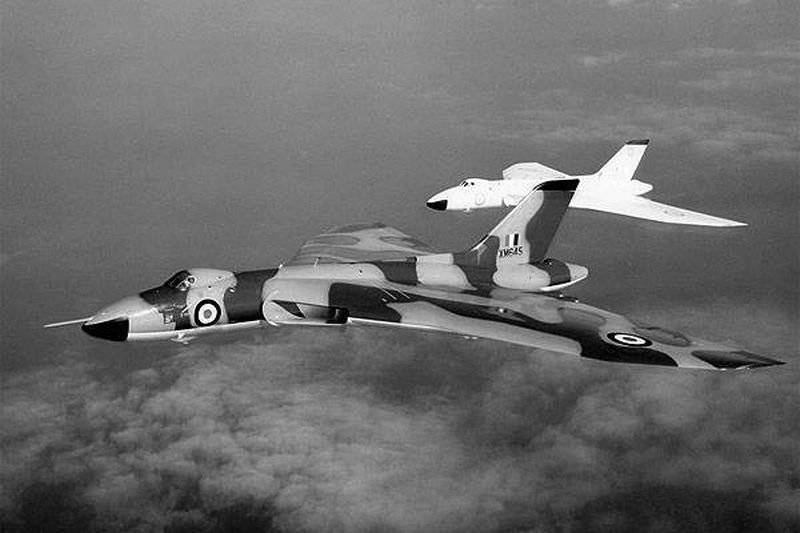 21.12.1982, the last long-range bombers removed from service. England could not pull underwater and aerial strategic carriers and refuses the latter. In total, during the period of peaceful exploitation, 7 Avro Vulcan units were completely lost in accidents and catastrophes. 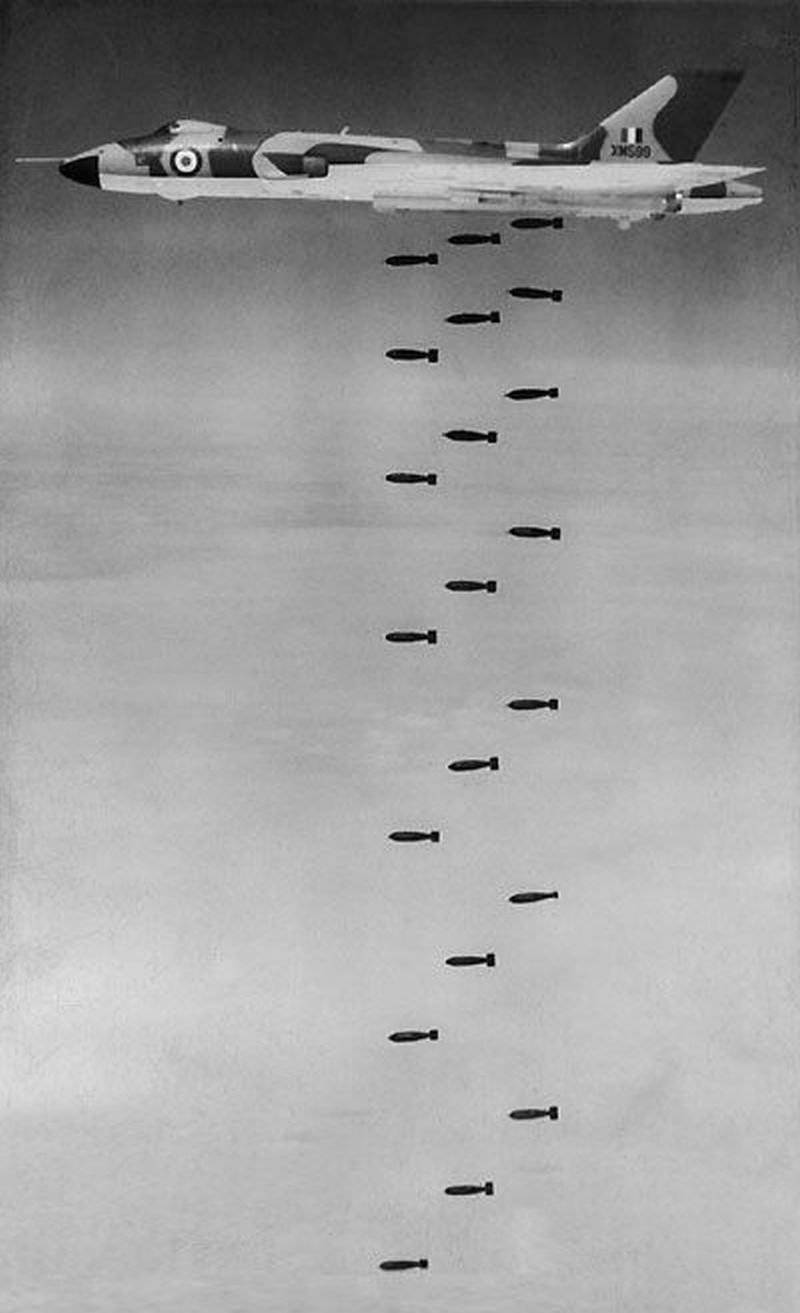 Device and design "Avro Vulcan"
The long-range bomber was built using a “flying wing” scheme, four turbojet engines and an 3-landing gear. The main structure of the airframe is made of sheet light alloys. Wing triangular type. Used two-spar wing design. Air brakes - eight panels of rectangular type, installed in pairs in the upper / lower part of the wing. To access the engines in the lower part of the wing made removable panels. The fuselage is a 29.6 meter long (with an extension of 10 meters) with a diameter of 3 meter. In front of the fuselage in front of the cockpit is a radar compartment. At the bottom of the front of the fuselage there is a blister of a bomber optical sight and an access hatch near it. The 8.5-meter bomb bay is made in the middle part. The back of the fuselage ends with an installed radar to protect the tail section of the aircraft. A brake parachute container is mounted at the bottom of the rear. The main landing gear ends with eight-wheeled carts, provided with liquid damping, the front landing gear ends with a two-wheeled steer trolley. 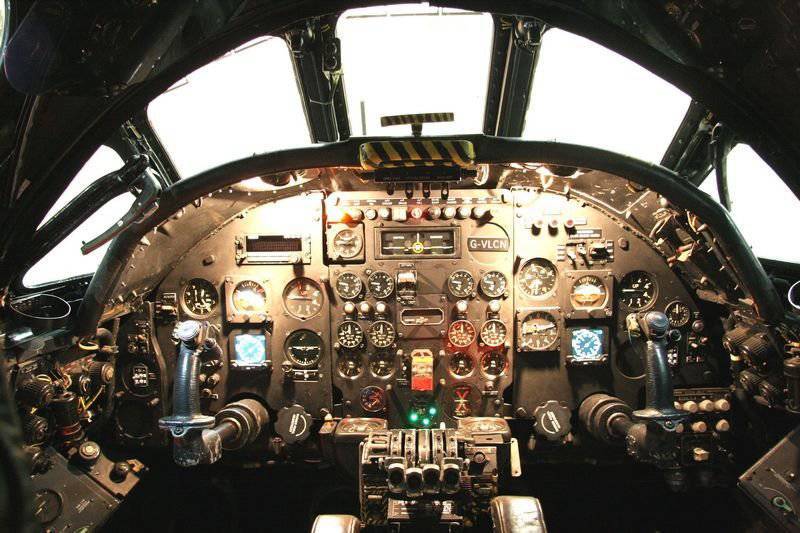 In the pressurized cabin is placed the entire crew of the bomber, consisting of:
- two pilots;
- navigator;
- Bombardier navigator;
- officer REP.

Only aircraft pilots were provided with ejection seats (ejection through the cockpit canopy, shot back earlier), the rest of the crew in an accident is ejected from the aircraft from the entrance hatch. In the cabin there are special periscopes for the rear view.