12 September 2012
144
Soldiers of the Ground Forces of the Russian Federation this fall will be able to test promising domestic developments in the field of military equipment for soldiers from the “Warrior” series, according to the press service of the Ministry of Defense of Russia. All in all, the tests that will take place from September to November 2012 on the territory of the Alabino training ground near Moscow will present around 40 various newly created or modernized elements of combat equipment: gunner, driver, and scout. The equipment will be included - small weapon, various body armor and clothing. Testing of new equipment sets will be carried out by military personnel of the 27-th separate motorized rifle brigade, stationed in Teply camp (Moscow).

According to Colonel-General Vladimir Chirkin, Commander-in-Chief of the Russian Ground Forces, promising elements of the soldiers' combat gear were created as part of the Ratnik design and development projects, as well as in the course of initiative development of Russian defense enterprises. Last December, Yury Borisov, the first deputy chairman of the Military-Industrial Commission established under the Russian government, said that the “Warrior” outfit would be developed in the coming 3 of the year.

Equipment "Warrior" is today considered the easiest. Its total weight in the standard version, including body armor 5-th class of protection and overalls, will be about 10 kilograms. The maximum version of the equipment, which will include in the guards for the hips and shoulders, helmet, assault armor 6-th class of protection will weigh about 20 kilograms. In total, the set of equipment "Warrior" will include up to 20 of various elements.

According to Yury Borisov, development and research work on the development of new equipment for Russian military personnel was carried out by dozens of national defense enterprises. In his opinion, Russian gunsmiths are fully capable of creating the equipment of a soldier of the future, who will be able to compete on an equal footing with modern foreign models already in service with some countries of the world. 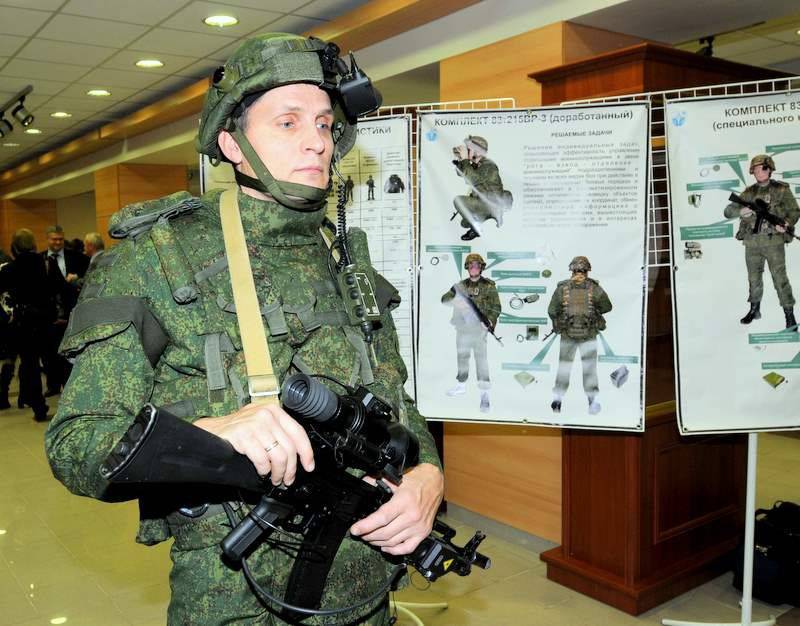 The new Russian combat equipment of the “soldier of the future” should combine work in many areas, such as modern small arms, effective protection kits and communications equipment. New combat equipment for ground troops should, in addition to functionality, that is, for example, provide communications in the right direction in the conditions of various jamming conditions, to provide effective protection for the soldier against various damaging factors on the battlefield. New equipment is, first of all, a comprehensive solution that should combine intelligence in oneself. According to Yuri Borisov, the new equipment of the ground forces should have a modular layout and be adapted for combat operations in a variety of conditions.

In the event that the ground test of new Russian developments in the field of military equipment is successful, the new ammunition will soon begin to enter into service with the Russian army. After that, the appearance of the Russian soldier will undergo major changes and qualitatively change. In total, the 10 order of various subsystems was included in the new Russian combat gear "Warrior".

The need for new equipment

Modern realities of warfare dictate new conditions and requirements, today the soldier must have on hand a modern means of communication in order to navigate in a combat situation and receive the necessary instructions. It is necessary that the entire current tactical situation is displayed on the screen. A modern soldier must fight all day and around the clock. This means that he must necessarily have at hand a night-vision device with which he can conduct aimed fire at night.

The modern fighter should have the means of communication with which he could communicate on a tactical level with his colleagues and officers, coordinating his actions in combat conditions. He should have a comfortable helmet that is able to provide not only a good level of protection, but also comfort for his head. His equipment systems should allow the fighter to feel equally comfortable in different conditions in summer and in winter. In this summer, he should not fry in his suit, and in the winter - not to freeze. 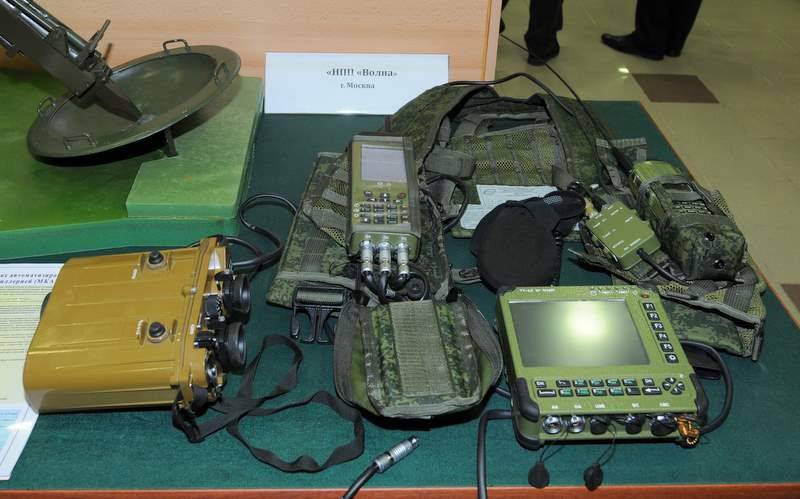 Providing all these conditions brings modern infantry to a qualitatively new level of combat. For the first time, sets of equipment that satisfy these conditions appeared in the West, where soldiers were always taken seriously. Recently, more attention has been given to this topic in Russia, which is confirmed by the work on creating equipment for the “soldier of the future”, for example, the same “Warrior”.

It's no secret that today, NATO servicemen in their appearance have become similar to cyborg, while the Russian soldier engages in battle, almost in the same clothes in which his ancestors fought on the Borodino field nearly 200 years ago. The style of clothes has changed in Russia, but its content has largely remained the same. The same pants, the same undershirts and jackets, the same shoes - boots and boots. It is not by chance that at one moment representatives of the Russian Ministry of Defense had an interest in the French ammunition FELIN.

At the same time, the fact that in the optimization of uniforms and the protection of a modern warrior was the Soviet / Russian scientific thought traditionally ahead of the world level is paradoxical and offensive. At present, it has been forgotten, but it was in the USSR that they were the first to start dressing motorized infantry in body armor. Heavy and not very comfortable body armor managed to save thousands of lives of Soviet soldiers in Afghanistan.

At the end of the 1980-s in the USSR, work began on the development of a fundamentally new combat equipment of servicemen. The work was carried out at one of the leading defense enterprises of the country - TsNIITOCHMASH within the framework of the Barmitsa project. It was in the USSR that, for the first time in the world, the implementation of the advanced concept at the time: “soldier as a combat system.” At the enterprise, work was carried out to create a fundamentally new set of uniforms, as well as separate subsystems of protection, life support, destruction, control, and even power supply for an individual fighter. 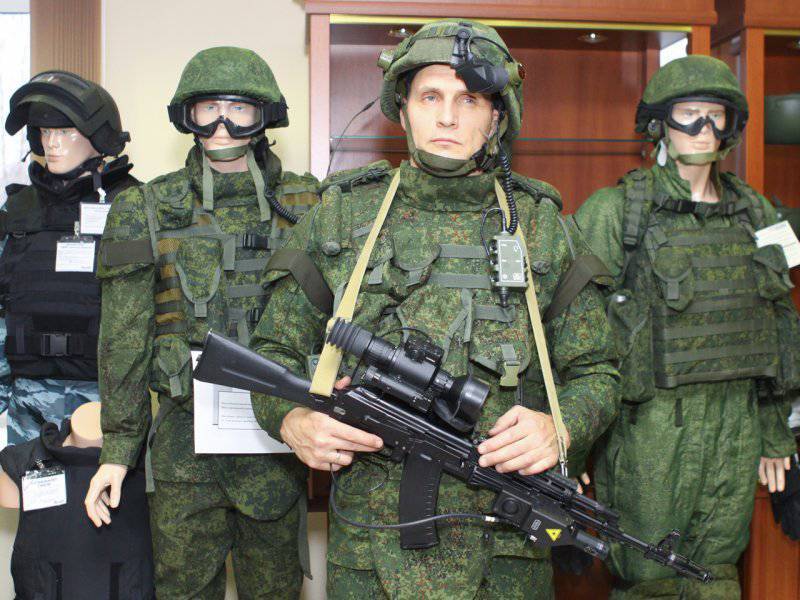 By the beginning of 2000, the main armament and equipment complexes were generally created, and even in small batches began to enter into service with individual units. At the same time, work was begun on the creation of an even more advanced military combat vestment complex already in the framework of the new project “Warrior”.

What is a new ammunition

In appearance, the new Russian combat ammunition looks even more aesthetically pleasing than the one that the US Army soldiers are wearing on posters. And in its content, it is no worse. New protection is differentiated and combined. The vital organs of a fighter may be covered with special armor, which, depending on the functional tasks to be performed, may be steel, titanium or metal-ceramic. At the same time, synthetic protection is widely used. The helmet we were used to was replaced by helmets of various configurations, which are also made from a variety of materials: titanium, composites, or steel. New helmets will save the head of a soldier in situations where old helmets just made their way through.

The basis of the new equipment is aramid overalls, which are made of Alutex fiber manufactured by Kamenskvolokno. This jumpsuit is able to withstand a direct hit by fragments of grenades, mines or shells, as well as withstand exposure to an open flame for some time. In addition, the composition of the "Warrior" includes a special body armor and helmet. The standard version, consisting of an 5 protection class and overalls, weighs about 10 kg, an assault kit version of a helmet, an 6 protection class, and armor protection to protect the shoulders and hips of the fighter weighs about 20 kg. In general, a set of new combat equipment will be able to cover approximately 90% of the body surface of a soldier.

The “breathable” design of the new set of equipment will provide for the continuity of wearing for at least 48 hours. And the level of protection that will be implemented in the “Warrior”, will allow not to be afraid in some situations, even sniper fire. In this case, if necessary, the entire set of equipment can be reset with almost one movement in a few seconds. 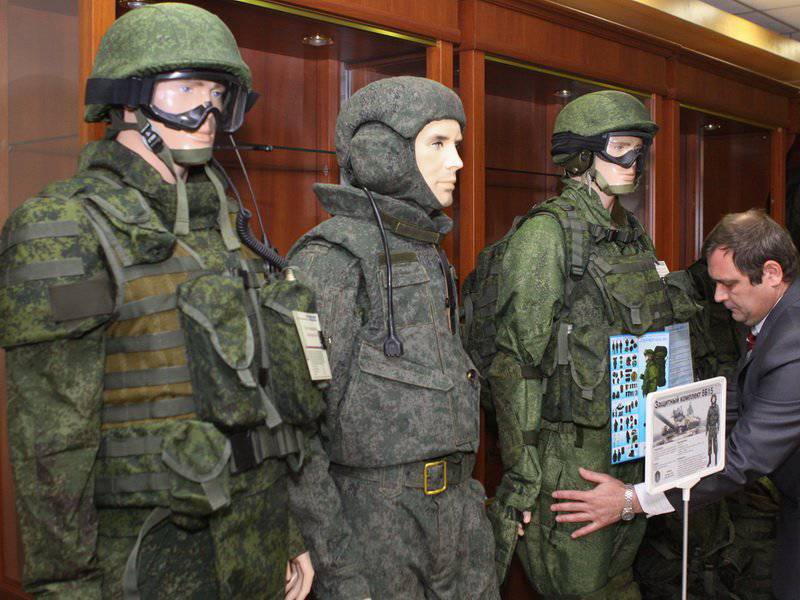 Equipment set "Warrior" is a completely Russian invention. It was created by the Russian nugget designer Denis Salahov. The bullet-proof vest created in Russia for military men of the Navy is a world know-how. Russian specialists managed to combine the capabilities of a life jacket with a bulletproof vest. Thanks to this, a sailor carrying a watch that requires wearing a bulletproof vest will not sink when it gets into the water, but will float on the surface almost like a float.

A fighter who will be dressed in a new set of equipment will be provided with reliable, secure communications, will receive a target designation system, navigation and much more. A communicator will be placed on his ammunition, which will determine the coordinates of the soldier using GPS and GLONASS systems, which will make it quite easy to accomplish the tasks of target designation, orientation to the terrain and other applied calculations. In this case, the location of the soldier on the battlefield will be automatically transferred to the command post and the fighter in principle should not go missing.

The armament system at the current stage of development of the complex includes the newest version of the Kalashnikov assault rifle, equipped with a rifle grenade launcher, night vision sight, and a thermal aiming system, which has no analogues in the world, according to the designers. In addition, the soldier will receive a video module that will allow him to fire from around the corner or shelter, without protruding.

It is worth noting that the transmission of video information will be carried out in a wireless mode. Whereas the same French, in their FELIN ammunition, transmit data from the sight of the machine into the eyeglass indicator using a wired connection. The Russian set of equipment "Warrior" will literally be crammed with electronics, which will allow the soldier of the Russian army to become part of a unified combat system, managed using the latest network-centric technologies. For the first time, the new ammunition was presented at the MAKS-2011 air show last year. In the fall of 2012, the time came for her real military trials.