Reminder to Moscow: do not go into our territory ("Investor's Business Daily", USA) 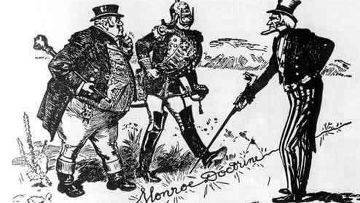 Russia agreed to assist the ruling regime of Venezuela in joining the atomic era: it will build the first nuclear power plant in the country. Does anyone in Moscow remind you that the Monroe Doctrine has not lost its relevance?

In 1823, the then President of America Monroe, in a message to members of Congress, stated that any attempts by European countries to interfere in the affairs of the Western Hemisphere would be considered a threat to US security. That is a bloody Europe with its wars will not be a welcome guest in the vicinity of America. We stay away from your business, said Monroe to the old Continent, and we hope that you will keep away from ours.

This doctrine of the United States returned more than once; Probably the most famous statement was made by President Kennedy, who during the 1962 Caribbean crisis of the year declared that "the country will do everything necessary to protect its security and the safety of its allies."

Soviet Prime Minister Nikita Khrushchev, two years before sending rockets to Cuba, said that this doctrine was dead and that "it should be buried, like any dead person, so that it does not poison the air with its decomposition." Almost fifty years later, Russian President Dmitry Medvedev returned to the idea of ​​Khrushchev.

At the Kremlin meeting on Friday, Medvedev and Venezuelan President Hugo Chavez reached an agreement that Russia would build two nuclear reactors in oil-rich Venezuela on one of two nuclear-free continents so far (the second is Antarctica); And this is despite the fact that Russia is already taking the most direct part in the construction of a nuclear power plant in Iran, another hostile country to the United States, in abundance with fossil fuel resources.

Of course, nuclear power plants and nuclear missiles are not the same thing. But after all, the technologies and materials needed to equip a nuclear reactor so that it produces electricity are not too different from the theoretical base and the resources necessary to create an atomic power plant. weapons.

These are the so-called dual-use technologies. Equipment that can enrich nuclear fuel for generating electricity is also suitable for enriching the same substance to a weapon-grade level. In one month, for example, a thousand megawatt nuclear power plant produces enough plutonium so that at least three nuclear weapons can be manufactured.

It is clear that this Russian-Venezuelan agreement is by no means a harmless contract in the field of energy. He conceived as a thorn in the eye of America. Venezuela has rich reserves of energy resources, it needs a nuclear power plant no more than Alaska imported snow. This is a direct challenge to the world order led by the United States and a demonstration for its own people.

Medvedev, who earlier this year pledged to sell Chavez weapons for another 5 billion dollars (worth four billion dollars of weapons already sold earlier), clearly showed this in the process of reaching an agreement.

“Russia and Venezuela strongly support the creation of a modern and fair world order in which our future will not depend on the will and preferences of a single country, on its well-being and mood,” he said.

This “one and only country” that Medvedev hints at would be worth paying attention to what Russia is doing in its half of the globe. It is enough that Moscow fosters allied relations with Iran, located far away. By expanding its ties with Venezuela to the agreement in the field of nuclear energy, it is trying to inflate its intervention and bring it to a new level.

In the past two years, we have actually come to the indulgence of Russia: we agreed not to deploy a defensive anti-missile system in Eastern Europe; we signed a contact on armaments, in which our nuclear arsenals were for the first time tied to the missile defense system; we close our eyes to the continued occupation of Georgia by Russian troops.

All this was done in an effort to "provide guarantees" of Russia and "press the reset button" in our relationship. Well, that didn't work.

Isn't it time President Medvedev found out that reciprocity is important in a relationship? And that the Monroe Doctrine is still alive?

The US must tell the Russians to stop interfering in the affairs of the western hemisphere — or they will have to face a much more aggressive US presence in Central Asia and Eastern Europe. The choice is theirs.