China's lunar program and its goals 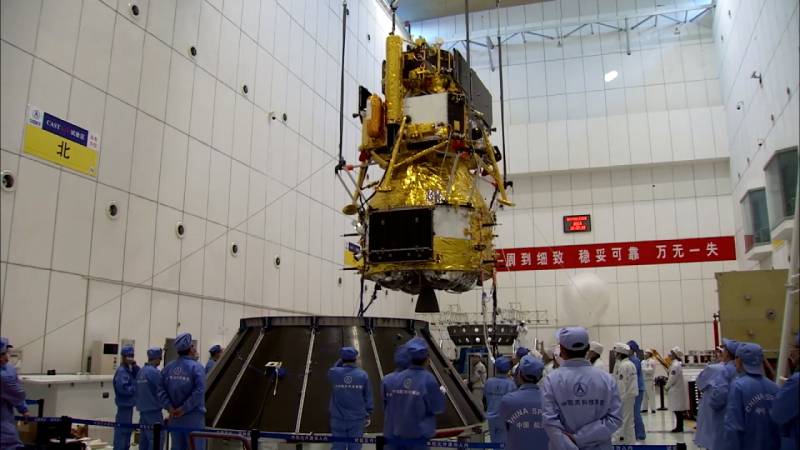 In recent decades, the China National Space Administration (CNSA) has made great strides and is now planning bold new programs. In particular, work continues on a large and daring lunar program. It is divided into several stages, and the first ones have been successfully completed. Now the goal of KKKU is to organize new research missions, and then to build a long-term automated scientific station ILRS.

The development of the lunar program, later called "Chang'e" (the goddess of the moon in Chinese mythology), began in the late nineties. In 2004, the finished plan was accepted for implementation, and then the first work began. The program is divided into four main stages with their own goals and objectives. Successful implementation of the plans of one stage creates the scientific and technical basis for the transition to the next.

The purpose of the first stage, which lasted until the beginning of the tenth years, was the launch of spacecraft into the orbit of the moon. The Chang'e-2007 apparatus was the first to solve this problem in November 1. In December 2013, the implementation of the second stage began: the automatic interplanetary station "Chang'e-3" gently landed on the surface of the satellite, carried out the necessary research and landed the first Chinese lunar rover. In December last year, the Chang'e-5 apparatus returned from the moon with soil samples. This summed up the third phase of the entire lunar program. 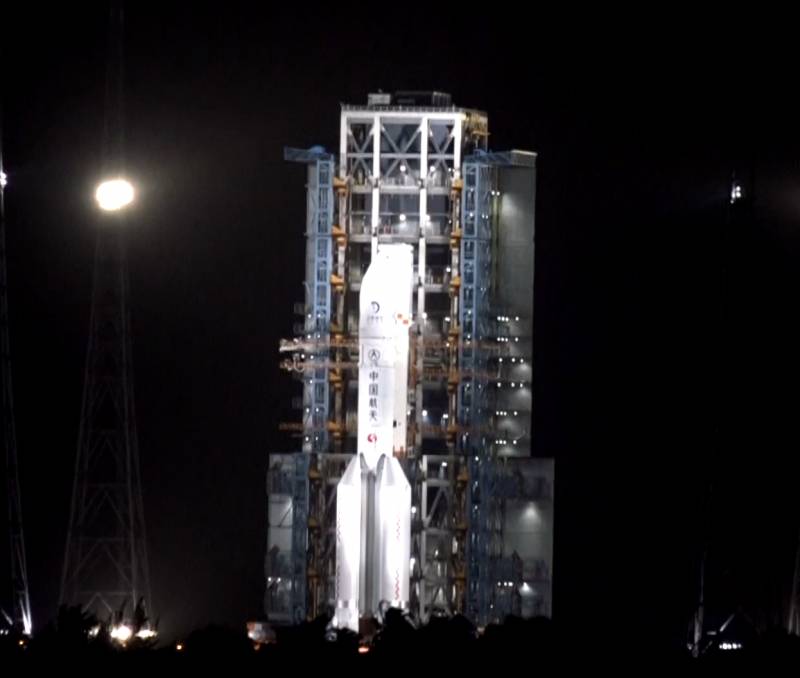 The Changzheng-5 launch vehicle with the Chang'e-5 spacecraft, November 23, 2020 Photo by Wikimedia Commons
The fourth stage of the Chang'e program provides for a greater number of launches of vehicles for various purposes. First, several landing modules with scientific equipment will be sent to the moon, which will find optimal places for placing a permanent station. Then, within the framework of the same stage, the deployment of the station itself will begin, which will be built on a modular basis.

The new Chang'e stage is particularly difficult and therefore will be the longest. Its goal is to build a full-fledged International Lunar Research Station (ILRS). According to current plans, the first research mission will begin in the coming years, and the construction of the entire station will be completed only by 2035.

It is curious that KKKU does not plan to carry out all the work independently and relies on the help of foreign colleagues. So, in March, KKKU and Roscosmos signed a memorandum on joint work. In addition, two organizations invited all interested parties to join the project. In June, it became known that negotiations were already underway with space agencies of third countries. 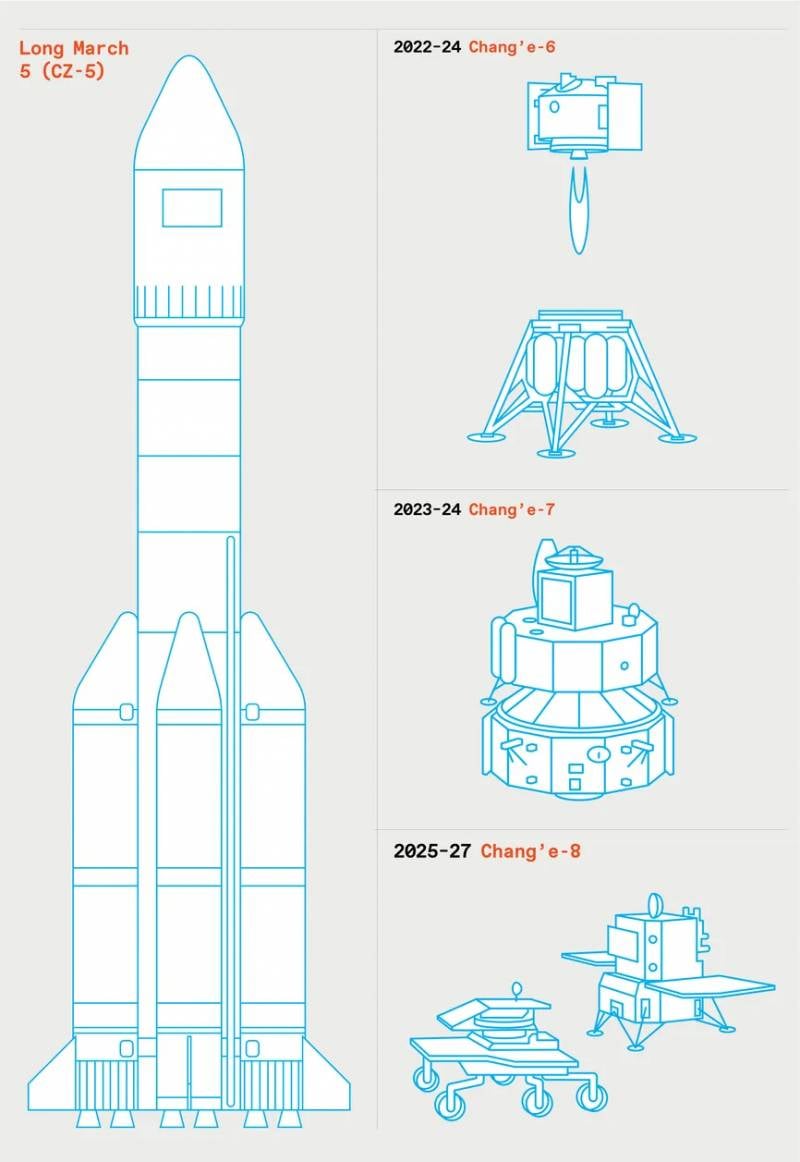 According to the latest reports, KKKU and other Chang'e participants will spend the coming years exploring possible locations for the ILRS permanent base. To this end, China will send two AMCs to the moon; also, the possibility of launching equipment developed by other countries is not excluded. Exploration missions of this kind will be completed by the end of this decade.

In 2024, KKKU plans to launch two lunar stations at once: "Chang'e-6" and "Chang'e-7". The first of them was built together with "Chang'e-5" as its backup, but was not needed in this role and moved to a new stage of the program. This AMS is planned to be sent to the region of the South Pole of the Moon for various measurements. In addition, she will have to collect and send a new portion of the soil to Earth.

The Chang'e-7 mission will also be sent to the South Pole. As part of this project, an orbital and landing module, as well as a lunar rover and an unmanned aerial vehicle are being developed. In addition, an auxiliary relay satellite will be built and sent into orbit. Chang'e-7 will investigate one of the craters and help determine its prospects as a site for the ILRS. 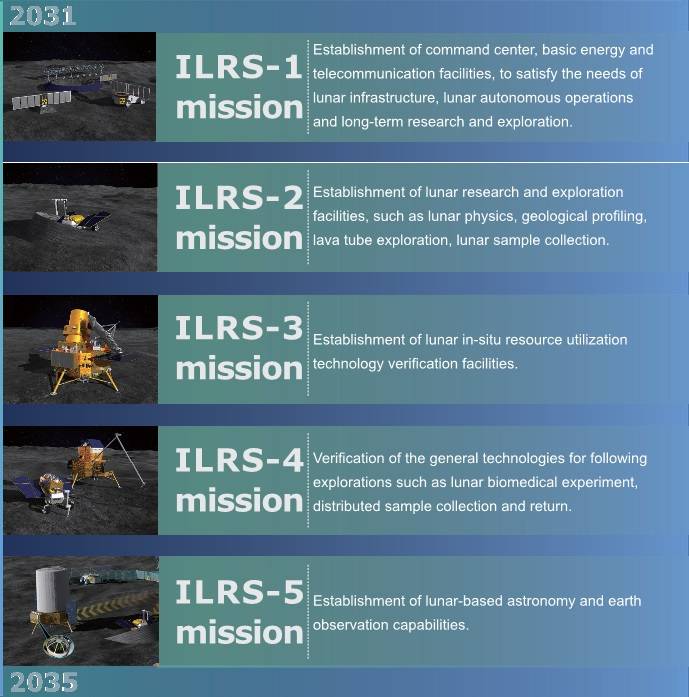 Stages of the iLRS Construction Program. KNKU graphics
In 2027, KKKU may launch the Chang'e-8 station with a special set of equipment. This AMC will have to conduct experiments on the use of lunar soil for the manufacture of building materials and simple structures. The success of such research will greatly simplify the further exploration of the Moon.

The planned research programs will be carried out using the existing heavy launch vehicle Changzheng-5. Depending on the modification and configuration, such a rocket can launch into a low reference orbit up to 25 tons or up to 4,5 tons into a geostationary one. This is enough to deliver modern AMS to the Moon.

A certain contribution to the future construction can be made by the Russian AMS Luna-25, which is scheduled to launch in May next year. It will deliver about a dozen Russian and foreign instruments for various purposes to the south polar region of the Moon. The assigned period of active existence is 1 year. Scientific data from Luna-25 can be used in planning further activities for the full-scale station. 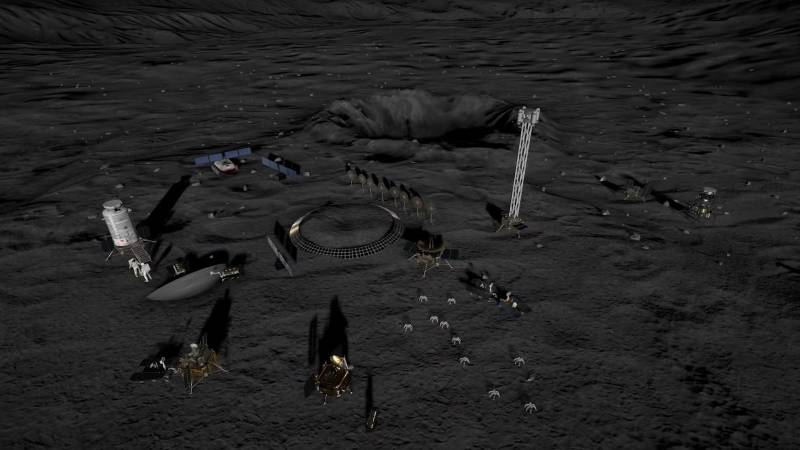 ILRS station on the Luna surface. KKKU graphics
Perhaps by the end of the decade, other Chinese or foreign-built AMCs will also participate in the South Pole exploration. However, so far there is only one international memorandum, and other countries have not expressed a desire to participate in the research and construction of the ILRS.

In parallel with the research, the design and construction of the components of the future ILRS long-term station will be carried out during the twenties. According to KKKU's current plans, the first elements of this complex will be sent to the moon in 2031, and the latter will be deployed in 4-5 years. However, according to the results of the work of the planned AMC, plans and projects can be adjusted.

Construction of the station will begin with the ILSR-1 mission, when the key elements of the station are sent to the moon: an automatic command center, an energy module and communication systems. Then the ILSR-2 module will be sent with a set of new scientific equipment. After landing on the moon, it will be connected to other facilities of the station. The next module ILSR-3 will deal with the production of building materials for further work. ILSR-4 is used for new experiments, as well as for collecting and sending samples to Earth. In 2035, the ILSR-5 lunar observatory will be delivered to the site to observe space and our planet. 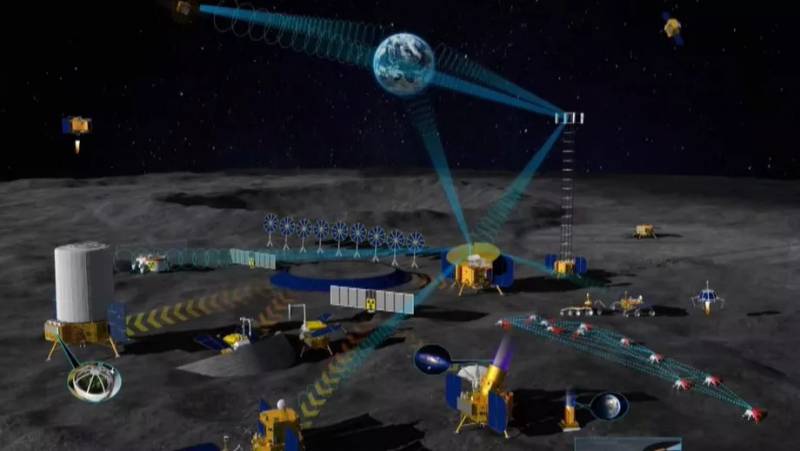 Interaction of station components. KNKU graphics
The components of the ILSR station, according to calculations, will differ in size and mass, which is why they need a special launch vehicle. A super-heavy rocket "Changzheng-9" is proposed for them, capable of delivering 150 tons to LEO or 53 tons to GSO. Other projects of launch vehicles with similar characteristics are also being developed.

Most likely, in 2035, the construction of the ILSR will not stop. In the future, China, independently or in cooperation with other countries, will be able to send new modules and components for one purpose or another to the moon. In addition, from a certain time, KKKU and its subcontractors will have to replace old modules that have exhausted their resource. However, plans of this kind have not yet been disclosed - and, probably, have not even been drawn up yet.

Thus, China continues its Chang'e lunar program and makes plans for a decade and a half ahead. In the coming years, KKKU will conduct several additional research missions, and then begin the full construction of a long-term research station. By the mid-thirties, it will acquire the form proposed by the current project and will be able to solve a wide range of problems. 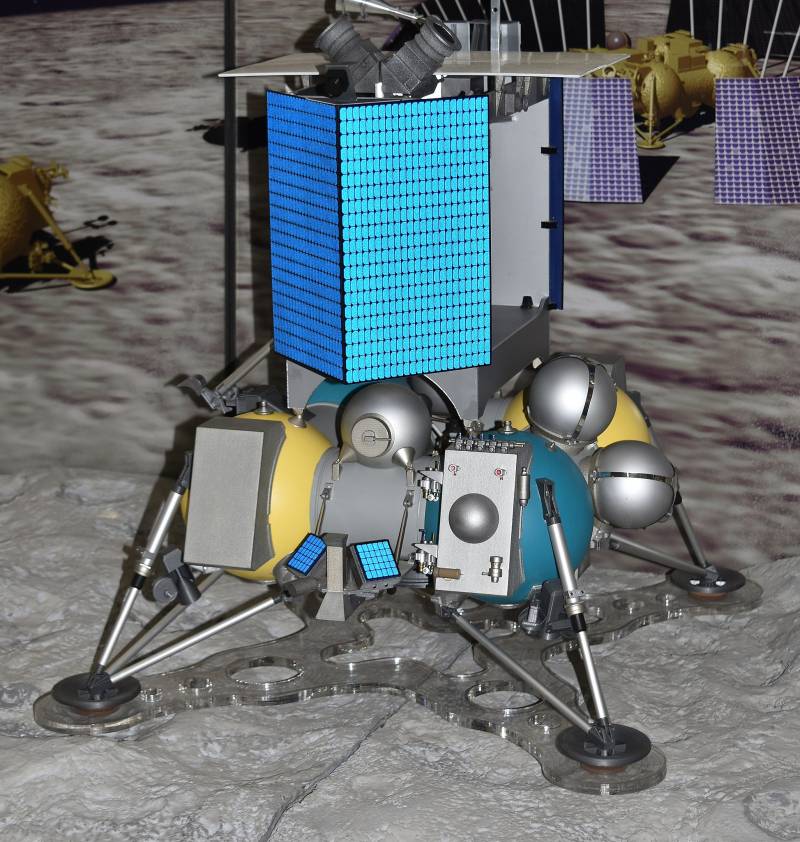 Model of the Russian station "Luna-25". Photo Wikimedia Commons
It should be noted that the ILRS station is being created unmanned; all of its components will work offline. This makes it possible to greatly simplify and speed up all processes of creation and subsequent deployment of equipment. At the same time, the effectiveness of research and other work will remain at the proper level.

In the future, KKKU does not exclude the possibility of building a permanent habitable base - this will be the fifth stage of the lunar program. However, the timing of the appearance of such an object remains unknown. According to various estimates, it will be possible to create the base only in the middle of the century. In the meantime, all the efforts of the participants in the Chang'e program are focused on organizing new research and designing modules for the automatic station. It is these works that will determine the further course of the ILRS project, and with it the prospects for programs in the distant future.