How the Anglo-Saxons fought the Normans 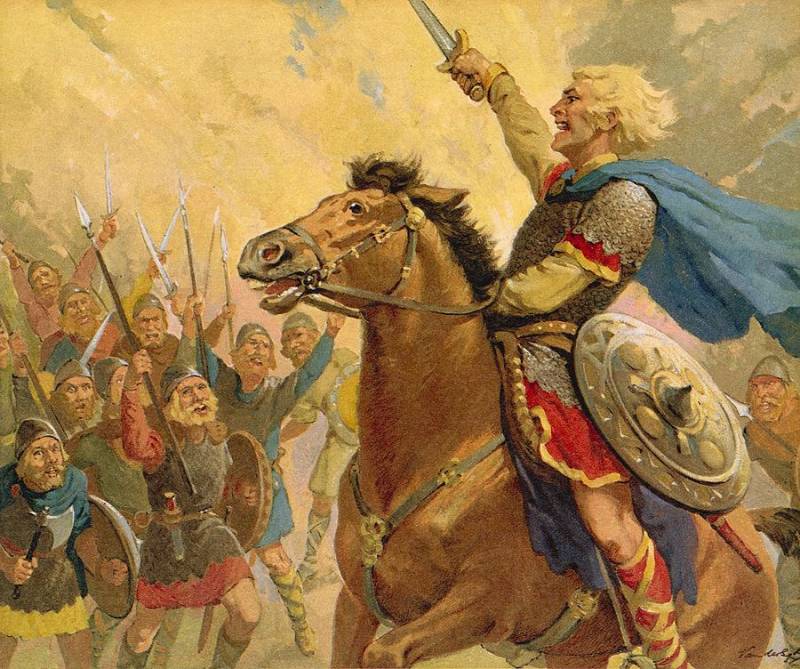 Hereward was born in about 1036 to the Anglo-Saxon nobility of Lincolnshire.

The time frame of Hereward's life and career is somewhat ambiguous, but individual well-documented incidents provide a kind of reference points that allow us to reconstruct a fairly accurate picture. According to some texts, he was kicked out of the family home in 1054, at the age of seventeen or eighteen, for violent behavior.

The young man spent the next decade as a mercenary, first in Cornwall and Ireland, then in Flanders. For most of this time, he was accompanied by two cousins, Siward Blond and Siward the Red, as well as one of his father's servants, Martin Lightfoot.

In Flanders, where he arrived in the early 1060s, Hereward achieved considerable fame as a warrior, both in campaign and in tournament matches. He then first served Bishop Litbert Cambrai: a document dated 1065 attests to nine armed men, including Miles Herivwardi as the prelate's bodyguard. He subsequently served Baldwin V, Earl of Flanders, as a mercenary and instructor officer. Among other places, he was in the city of St. Omer, where in the winter of 1065-1066 he married Turfried, the daughter of a wealthy local merchant.

Hereward stayed in Flanders until the end of the summer of 1067, until the death of Baldwin V, then he decided to return to England, where the Normans systematically strengthened their positions. He traveled with Martin Lightfoot as his only companion, leaving the two Siwards in Flanders to defend Turfrid.

Whether the move was motivated by concern for his family or self-interest remains a mystery.

Most likely, Hereward hoped that the Normans would lift his parents' ban on the control of the family's lands. However, this hope was soon dashed.

Arriving - presumably early in 1068 - in England incognito, he found that his family estate was occupied by the Normans. After thirteen years abroad, Hereward - now a hardened bearded man in his thirties - was unrecognizable to the local population. He spent the night at the home of Osred, a former soldier and tenant of his father, who spoke of the hardships and ill-treatment suffered by the Anglo-Saxon population.

The Normans arrived at Hereward's estate just a few days ago. When they occupied it, they demanded that Hereward's mother hand over the family treasures to them, and they brutally treated her when she refused. The entire Hereward family was killed.

Learning about everything, Hereward at night in full military attire decided to single-handedly reclaim the estate. Fortunately for him, he was guarded by about fifteen Normans, who decided to celebrate the acquisition of such a good estate. Having dealt with the half-drunk warriors, Hereward hung their heads over the gate as intimidation.

The birth of a rebellion

News of this spread quickly. Neighbors and relatives flocked to Hereward to greet and praise him. He selected 49 of the best fighters from among his relatives and his father's tenants and organized them to defend the estate from the expected retaliation of the Normans.

Hereward himself, with a few men, quickly moved to attack the small Norman troops encamped in the nearby estates. Within a few days, the surviving Normans fled the area, fearing a general uprising.

Hereward's actions were well received by the Anglo-Saxon population. More and more male farmers, displaced persons, outcasts flocked to him every day. Soon after realizing that his right to lead a fighting squad could be challenged due to lack of status, he asked the abbot of the nearby monastery of Peterborough to officially knight him. Abbot Brand (sometimes referred to as Hereward's uncle) performed the ceremony at the abbey chapel on June 29, 1068. At the same time, two of Hereward's best sub-leaders - named Winter and Gaenoch - were also knighted by a monk from the Benedictine monastery of Ely.

Hereward's next major step was the targeted assassination of Frederick, brother of William of Warren, one of the most powerful Norman lords.

Frederick led the Norman efforts to hunt down Hereward. His publicly supported plan was to either bring the rebel leader before the king for punishment, or simply kill him and expose his head at the crossroads.

Hereward learned that Frederick was staying in Norfolk, where he awaited intelligence of the mutiny. In order to quickly deal with him, he led a small mounted assault group to Norfolk. Penetrating into the fortress of the Normans, he personally defeated Frederick.

Realizing that this murder would only strengthen King William's efforts to eliminate him, Hereward ordered his people to disperse, and he sailed to Flanders. His stay there did not last long, and at the beginning of 1070 he returned to England, bringing with him not only Turfrida and his cousins, but also a number of knights and retinue. Surprisingly, he found his estate untouched. A group of his fighters quickly emerged from cover, explaining that the rest of the forces were spread out more widely.

By this time, Hereward's forces included a large number of battle-hardened knights, as well as a peasant militia.

When word of his return spread, Hereward received a summons from Thurstan, abbot of Ely Abbey. Situated on a large, elevated island in the swampy countryside of eastern England, the abbey was in a very defensive position, unsuitable for operations by Norman cavalry or armored infantry. The monks had already fortified the island to prevent the installation of a new Norman prior, and now they offered the island to Hereward as a base.

Accepting the offer, Hereward sent his men to Bardney, Lincolnshire, and headed upriver to the marshes. Meanwhile, Count Wilhelm of Warrennes had succeeded his brother Frederick as head of the effort to track down Hereward.

After receiving intelligence about the rebels' plans to redeploy, he deployed units along the route that Hereward was to follow. However, Hereward's scouts defeated several Normans and learned of the Count's location.

The next day, Hereward, accompanied by several men, appeared on the banks of the river opposite William's position. When the Earl learned of the approach of Hereward, he became enraged, ordering his men to swim across the river and capture the criminal. Waiting for a Saxon ambush, the soldiers refused. Wilhelm and his warriors had to flee.

From their base in the swamps, the rebels waged many devastating campaigns - sometimes with the Danes - combining attacks on military targets with plundering of Norman cities. From time to time, the rebels have resorted to a scorched earth strategy, burning entire villages to prevent them from being used by the enemy.

The main target of the attacks was the former English estates and abbeys, which were captured by the Normans. The most famous such operation was the attack on the monastery of Peterborough in June 1070.

According to old texts, the newly appointed Norman prior began distributing church lands to the knights in exchange for their promise to join the hunt for Hereward. In a rage, Hereward ordered a full force attack on the fortified abbey and the nearby city of the same name. Expecting strong resistance, Hereward invited the Danes to join the operation. Embarking on ships, the warriors sailed straight up the River Nene at Peterborough.

Having set the city of Peterborough, as well as the monastery buildings, on fire, the attackers captured the defenders and deprived the abbey of all values. Hereward intended to kill Abbot Thurold, but he and his men fled.

What happened next remains controversial.

According to some texts, Hereward had a vision of Saint Peter, who ordered him to return the sacred artifacts or die a painful death. Duly impressed, Hereward and his men submitted to this threat.

According to other texts, the Danes went by sea with treasures, leaving Hereward and his people alone. The second version seems plausible as subsequent events no longer reflect the Danish presence.

The siege of Ely and the end of the rebellion

Furious at the failure of his subordinates to curb the rebels, King William decided to take matters into his own hands.

According to sources from those years, he sent large forces to the village of Aldret. The village was located in the narrowest gap between land and Ely Island, where the swamp was only four furlongs, or about 800 meters in length. The king ordered his men to build a floating bridge from logs tied to inflated sheep skins. When the armored Norman infantry passed over the bridge, it collapsed. More than half of Wilhelm's people drowned before his eyes. Alarmed, he returned to the siege of the island, placing the remaining men in a ring around the swamp to prevent raids by Hereward's troops.

Wilhelm's next strategy was to build a stone and timber dam across the swamp. Raised bastions for catapults and siege engines were erected on the dry shore to provide shelter for engineers. When the Normans finally prepared to attack across the completed dam, the Anglo-Saxon troops approached their positions through the swamp, wading quietly and keeping only their heads above the water.

As the Normans began to cross, Hereward's men lit fires on the leeward side of the dam. The thick smoke confused the attackers. Many lost their support, fell off the dam and drowned. Other retreating Normans stumbled upon a group of Saxon archers waiting for them, who hacked them to death.

The second time, Wilhelm was forced to retreat.

Realizing that Eli was almost impossible to storm without heavy losses, the king tried new tactics.

Announcing his intention to punish the abbey for supporting the uprising, he seized all the lucrative lands that the abbey owned outside the island of Ely. The trick worked.

While Hereward was raiding, the abbot and a delegation of monks sought out the king and offered to lead his people through the swamps if their lands were returned. One monk hastened to warn Hereward, who went with several hundred people to the wildest parts of the marshes. From here he continued his guerrilla war, constantly changing location, becoming more desperate and ruthless in his struggle.

The king, for his part, first called on the Anglo-Saxon militia to help track down the rebels.

At this time, the envoys of Elfreet, the widow (or ex-wife) of the Norman Count Dolphin, turned to Herewardau. A rich widow praised him for his military prowess and offered to marry if he would reward her for making peace with the king.

Perhaps Hereward was tired of the war. He probably realized that it was only a matter of time before the better organized Normans would destroy him and his people. In any case, Hereward agreed, exiled Turfrida to the monastery and sent messengers to the court. The king welcomed his opponent with open arms, inviting him to court and granting Hereward's petition to restore his family's lands.

Hereward eventually urged his people not to harm the Norman soldiers and made peace with the king.

According to sources from those years, about five percent of the Anglo-Saxon nobility, after years of resistance, nevertheless reconciled with the new regime and, in turn, were accepted into the new Anglo-Norman ruling class. Some have even risen to positions of power, reflecting the Norman desire to pacify and rule the country rather than waste resources fighting endless insurgencies.