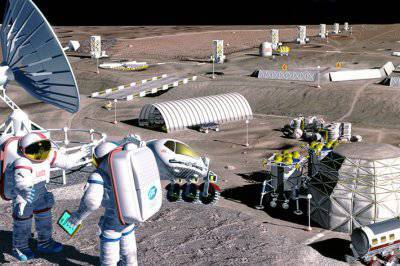 Deputy Prime Minister Dmitry Rogozin spoke in favor of building a station in the Moon’s orbit, which, in his opinion, will serve as a super-goal for the Russian space industry and will help solve problems in this industry.

“It will be a base for further jumps and jumps,” Rogozin said on the air of Vesti FM radio station on Tuesday, RIA reports.News».

"Russia must formulate what it wants from space"
According to him, the project of the station in the orbit of the Moon will pull science and technology along with itself and will become an incentive for further achievements in the Russian space industry.

“Why not try working in microgravity,” said Rogozin.

Recall that at the end of August, Rogozin proposed to send the ISS to the Moon.

The increase in the number of space accidents in Russia is a consequence of the “oversize” of the industry and its unclear goals, Rogozin believes.

“Russia must formulate what it wants from space,” Rogozin said.

According to him, the Russian space industry is "oversized" and this factor complicates the quality control at work. “With such a broad nomenclature it is impossible to control it (quality - approx. VIEW),” the vice-premier believes.

He also noted that the space industry needs to be put in order and, first, formulate clear goals in space exploration. “We need to establish an elementary order in the head,” Rogozin stressed.

The situation in the Russian space industry is not as critical as it may seem at first glance, the deputy prime minister said.

“We do not have a systemic crisis in the space industry,” said Rogozin.

In his opinion, the main ills of Russian space are a large percentage of manual labor in enterprises, their low equipment and high average age of personnel.

According to Rogozin, it is necessary to introduce high quality technologies and, if possible, replace manual labor. “This is how Europeans work, Americans work this way, and we will now move on to this,” Rogozin stressed.

He added that he was not afraid of problems in the space industry and was ready to deal with them effectively. “I’m not afraid of these horrors after four years of work at NATO,” the Deputy Prime Minister said.

3 trillion rubles from 20 trillion directed to the state armaments program up to 2020 was allocated for updating the technical base of Russian industry enterprises, Rogozin said.

"3 trillion rubles, we are now throwing it on the purchase of modern equipment and the creation of its own production," - said Rogozin.

According to him, the main problem of the Russian industry in the fields of defense and space is obsolete machines and equipment plants.

“The main problem that I would like to say is the technical backwardness of our industry,” Rogozin stressed.

The State Armaments Program, which is scheduled for implementation before 2020, will be implemented, Rogozin said.

“We have two tasks. The first is the State Armaments Program. It will be completed by the 2020 year, and we are really modernizing the Armed Forces: they will have 70% share of the new weapons, ”said the Deputy Prime Minister.

“The second task is at the expense of the funds we invest in the industry, we are pushing it forward, and this industry is starting to move. New capacities appear, new personnel appear, ”Rogozin noted.

Speaking about the problem areas of the military-industrial complex, Rogozin called "special chemistry, special powder". “Chemical plants are in a difficult situation. Now we are updating them. It will take two to three years, ”he said.

According to Rogozin, "in a difficult situation, the industry of small weapons". “I am going to take the Prime Minister to Klimovsk. There we have our head enterprise - the developer of small arms “TsNIItochmash”, - he said.

Designers, technologists and operators work in one laboratory. According to the vice-premier, jointly created "new types of weapons: a new pistol, a new sniper rifle - they are the best in Europe, in Europe there are none like we have just made."