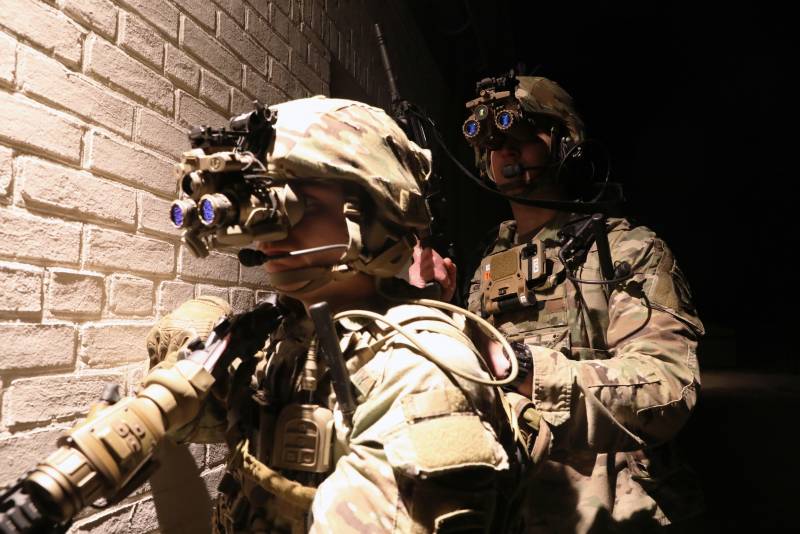 Soldiers of the 101st Airborne Division with ENVG-B instruments during exercises, February 2021

For several decades, US Army infantry and special forces have been actively using night vision devices to expand their combat capabilities. Recently, the main work on the multipurpose NVG of the new generation ENVG-B was completed, and now production samples of two models are actively supplied to the troops.

For a long time, infantry night vision devices have evolved as part of the Enhanced Night Vision Goggle (ENVG) family. In the mid-tenths, a new program for the development of an improved multipurpose NVG called ENVG-B began. The letter "B" indicated one of the goals of the project - the creation of a binocular device. At the same time, it was necessary to retain all the basic functions of the predecessors and provide for new ones.

Several companies have applied for participation in the program. In 2018, L3Harris and Elbit Systems became the winners of the competitive stage. They received contracts for the continuation of work and related funding. Already in 2019, two companies handed over the first experimental batches of night vision devices to the customer.

In the same year, the development of experimental products began in some parts of the army. In the future, they had to use such devices during tests and exercises in conditions as close as possible to combat. Since the spring of 2020, two new samples have been tested in parallel in order to identify the more successful one. However, this comparison did not provide for a complete transition to the "winner" and abandonment of the second product. 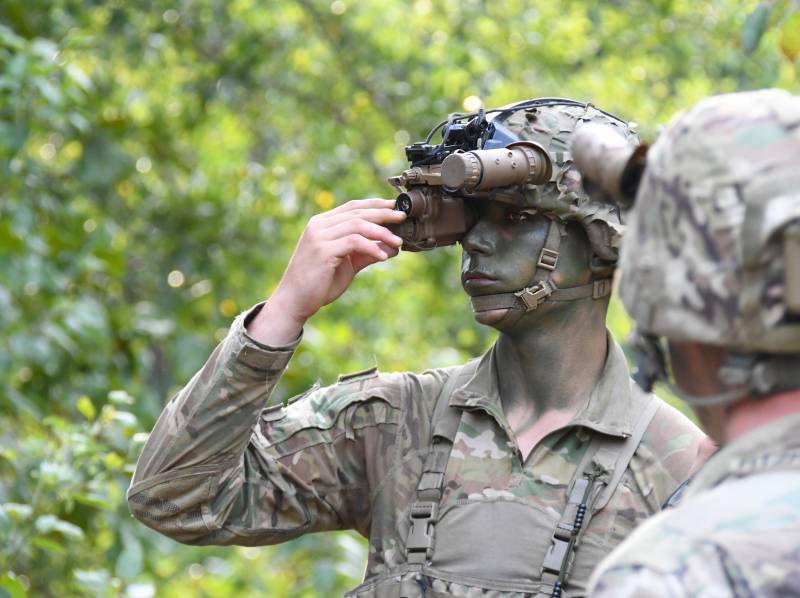 Using NVG in monocular mode
In October last year, contractors received additional contracts for the production of new batches of ENVG-B. The agreements provided for the supply of an unnamed, but large number of devices worth more than $ 40 million.The Pentagon planned to receive new night vision devices during 2021 and transfer them to new organizations for development and testing. Apparently, these orders have already been completed.

Since the end of last year, active testing has resumed, and now the army regularly reports on exercises and tests of various sizes and durations. For example, in February, a three-week comparative test was held on the basis of the 101st Airborne Division in a full-fledged exercise. Complexes ENVG-B of both types again positively influenced the combat capability of soldiers and were highly appreciated.

On September 16, it became known that L3Harris has received a new order for the production of its ENVG-B instruments. The number of products planned for delivery has not been disclosed, but the value of the contract has reached $ 100 million.The company reports that since 2018 it has manufactured and handed over to the army more than 6 thousand ENVG-B sets, which were then distributed between parts and used in tests. Now, apparently, we are talking about several thousand more products. 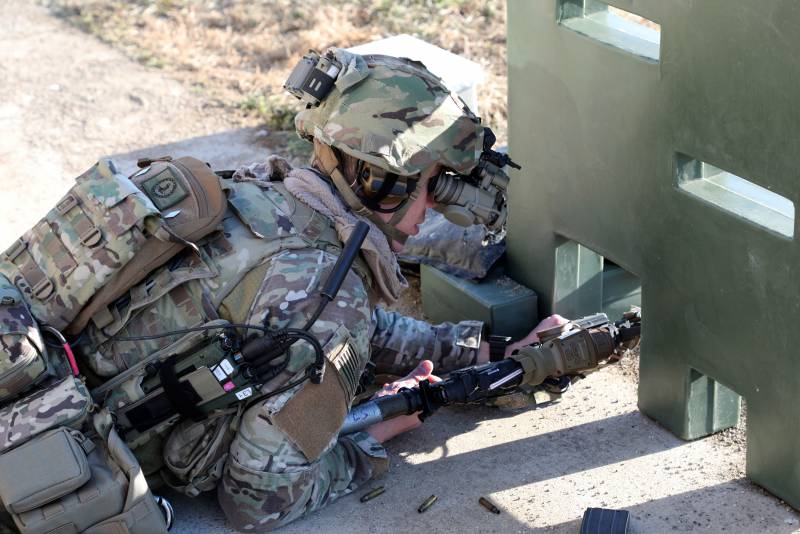 Using ENVG-B with FWS-1 scope
September 23 received a similar news from Elbit Systems. The American branch of the Israeli company has received an order for the production of an unnamed number of NVGs worth $ 54 million.The ordered devices will be assembled at the American site of the company and will be completed by February 2023.

Thus, to date, the US Army has received several thousand ENVG-B instruments of two types, and supplies will not stop. For the purchase of such products, it is planned to spend a total of approx. $ 440 million, and only two new contracts account for about a third of this amount. At the same time, the procurement structure shows that two samples with similar characteristics are entered into service at the same time, but one of the manufacturers receives larger contracts.

Apparently, already in 2022-23. there will be new orders for the supply of two types of night vision goggles in the amount of several thousand pieces. As a result, the allocated 440 million will be spent in full, and the army will receive a total of thousands or tens of thousands of pieces of modern equipment.

Optical complexes ENVG-B from Elbit Systems and L3Harris were created according to the same requirements and taking into account the same restrictions, which led to the formation of a similar appearance and to the use of some common technologies. In the early stages of development, the two devices were significantly different in appearance, but then such differences disappeared. 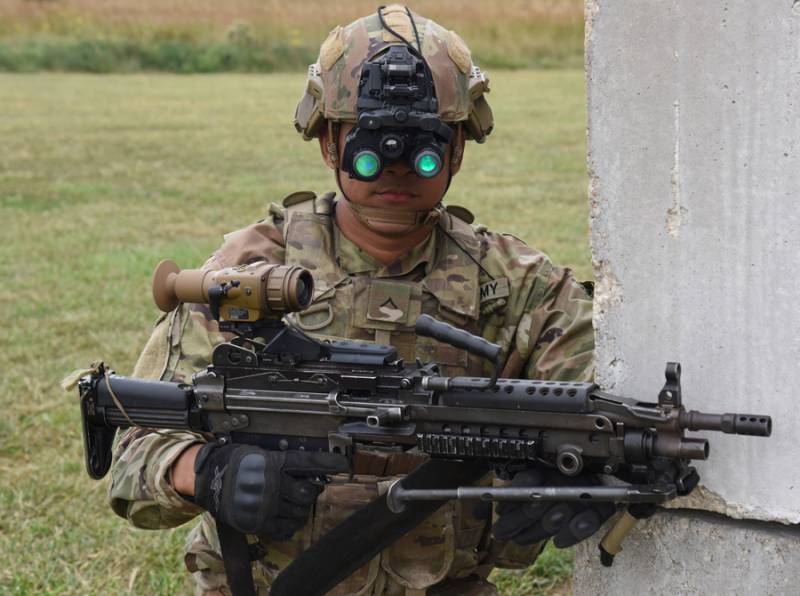 ENVG-B is a binocular NVG that mounts on a standard frontal mount of a soldier's helmet. In the stowed position, the device leans up on a hinge and does not interfere with the view; in the worker drops to eye level. The optical components of the device are made in the form of separate tubes with a hinge mount. This allows you to use the "tubes" together or one at a time: unnecessary folds to the side and up.

NVD includes three main optoelectronic components. At the operator's eye level, there is a "binocular" with dual-band optoelectronic converters and miniature screens. A separate infrared camera is placed above it. The optical devices are connected to an electronic data processing unit. The latter is compatible with the advanced communications and control system Nett Warrior.

The main operating mode of the binocular PVN provides for the use of an image intensifier with amplification of the existing illumination and the issuance of a signal to the eyepiece screens. An infrared camera can be used with the binoculars, which improves the image quality and / or allows observation in different ranges. 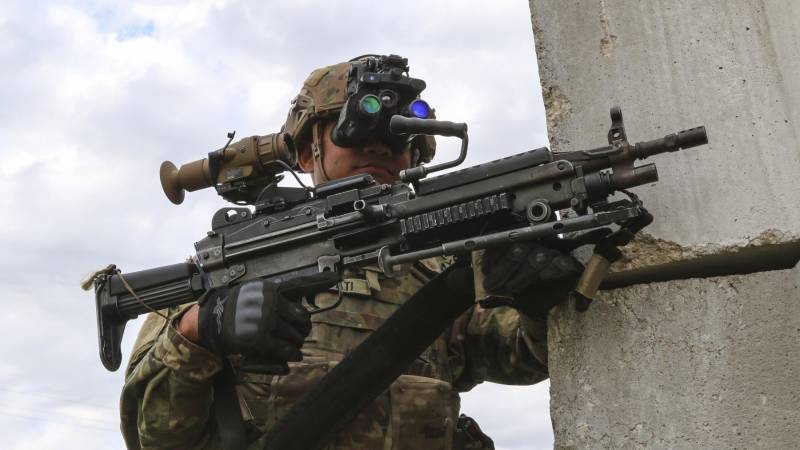 Both new NVDs have the ability to receive various signals and data from different sources with subsequent delivery to the eyepieces in full-screen mode, in the form of “picture-in-picture” or in augmented reality. This can be a signal from an optical-electronic sight of the FWS-1 type or the latest STORM II, or data on the tactical situation. It also provides wireless transmission of its video signal to other users, for example, a unit commander.

The full capabilities of ENVG-B products have been repeatedly demonstrated and confirmed in the latest tests and exercises. With the help of such devices, regardless of their manufacturer, rifle units effectively moved, parachuted and fought in the dark. The use of night vision devices together with electronic sights increased the overall efficiency.

With the help of the ENVG-B NVG and the Nett Warrior system, it was possible to simplify the observation of the terrain, the search and distribution of targets. This was facilitated by the presence of several observation modes, as well as the ability to transmit a picture to the commander. Using an electronic sight on a personal weapons, with a certain skill, allowed a fighter to simultaneously monitor two areas, incl. in move.

In general, the new ENVG-B NVGs have the most significant advantages over existing supply products. Such superiority was gained due to the refusal of unification and continuity, while simultaneously introducing a number of new components and solutions. 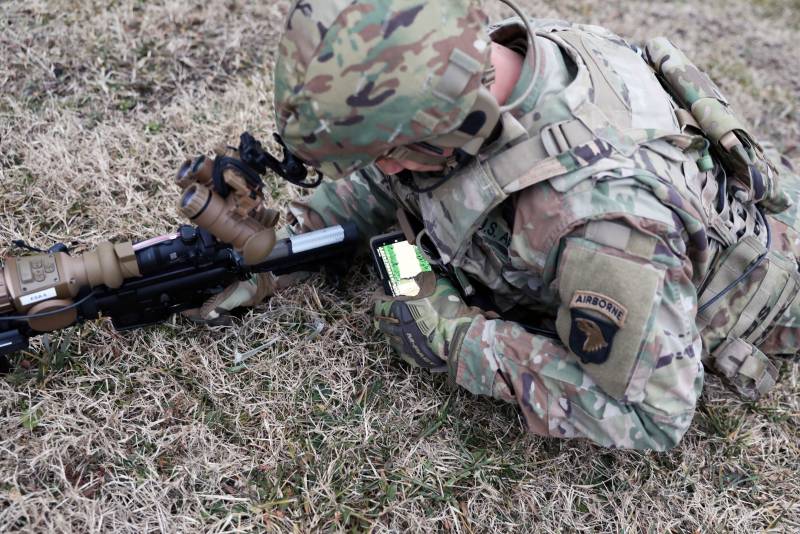 The unit commander uses his terminal to follow the battle "through the eyes of a subordinate."

Thus, two Pentagon contractors successfully completed the development of two multipurpose night vision devices / optical systems for use in rifle units. These products are already being produced in a fairly large series and are gradually distributed between different combat units.

According to current plans, production of ENVG-B will continue for several more years and will lead to the appearance of thousands of new devices. In parallel, other communication and control devices of new types will be produced. All these measures will make it possible to re-equip several more large formations and increase their combat effectiveness.

However, the successful implementation of the current $ 440 million plans will have limited results across the army. A significant proportion of units and formations of the ground forces, special operations forces and the Marine Corps will have to continue to use previously released night vision devices and other equipment. Probably, this issue will be solved later, with the help of new orders for ENVG-B. In addition, in the distant future, they can launch the development of next-generation night vision devices - and at the expense of it, carry out a new stage of re-equipment.