The Kremlin will suppress internal protests by the CSTO troops 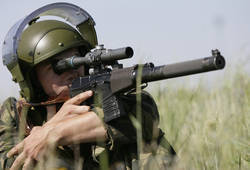 The nature of training and equipping units of the troops of the Collective Security Treaty Organization suggests that they are not prepared to fight with an external enemy. The Kremlin and its allies in the post-Soviet space intend to use these units to fight the internal enemy.

It is assumed that the troops of the Collective Security Treaty Organization (CSTO) will oppose not so much external enemies, as opposition within each member state of this organization.

Colonel-General Anatoly Nogovitsyn, who is the deputy chief of the CSTO Joint Staff, said that "the armed forces subordinate to the CSTO will begin to adopt firearms, traumatic weapon, stun grenades and tear gas ". This is the so-called" non-lethal "weapon.

However, such weapons are usually not used by the army, but by the police or special services. And you can’t disperse the enemy tank hoses columns. In addition, it is believed that the basis of the CSTO armed forces are motorized rifle battalions, whose mission is to repel external aggression.

Recall that the CSTO was created in 2002 as a military-political bloc, and last year its members - Armenia, Belarus, Kazakhstan, Kyrgyzstan, Russia and Tajikistan, agreed to form a rapid reaction force. They consist mainly of Russian units, which are based mainly in the Volga-Urals Military District. At the same time, many foreign observers and representatives of the CSTO member countries believe that this organization is a counterbalance to the NATO forces, which strengthens the position of Moscow. Nevertheless, geographically, the location of the CSTO group of troops shows that it is aimed not at the West, but at the East, in the region of Kazakhstan, central Russia and Central Asia.

Now even the declarative goal of the CSTO existence has been changed. After the well-known events in Kyrgyzstan and the recent statement by Nogovitsyn, many observers are speaking with great confidence about the focus of the CSTO on fighting the internal opposition in the member states of this alliance.

And this is a fact, despite the fact that Russian President Dmitry Medvedev said earlier about the possibility of using these troops only in the case of a foreign invasion. However, ethnic cleansing and pogroms in Kyrgyzstan forced politicians and observers to discuss whether the CSTO forces can be used to quell riots. According to Nogovitsyn, some leaders of member countries of the organization do not exclude such an option.

The retired colonel-general of the Russian army, Leonid Ivashov, who heads the Moscow Academy of Geopolitical Problems, noted that the trend among the signatories of the CSTO treaty is clear: they want to get a legitimate right to interfere in the internal affairs of their allies in the event of internal unrest or violence. According to him, this is precisely what explains the arming of the Russian CSTO units with "non-lethal" weapons, which implies a reorientation towards the suppression of internal protests in the post-Soviet space.

And this concerns not only Kyrgyzstan or Tajikistan.

“In Russia there are also internal problems - in the Far East, in the North Caucasus,” said Leonid Ivashov. Therefore, the new concept of the CSTO will not preclude the use of alliance troops to quell internal unrest.