Is the Kremlin preparing a controlled opposition? Or face control in Izborsk club 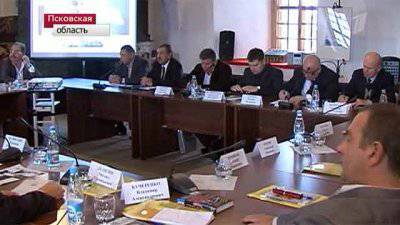 A little more than a month ago, there was information that a new socio-political organization, the Izborsky Club, was launched in Russia. The first reports about this formation were so contradictory that not everyone clearly saw the goal of creating such an organization. Let us now try to figure out what the tasks of those people are who decided that the existing socio-political organizations and political parties in Russia are not enough to solve urgent problems, and therefore it is imperative to create something new.

So, the “Izborsk Club”, as the ideological inspirers of its creation say, is an organization that is called upon to consolidate the conservative and patriotic forces of Russia.

Recently, Russian citizens managed to get used to the fact that the consolidation of absolutely any forces: patriots, liberals, homosexuals and lesbians, neo-Nazis, Slavophiles, anti-Putin and pro-Putin people often passes within the Moscow Ring Road, or at least on the banks of the Neva (the case with “ Uralvagonzavod and other similar places in this chain can be considered a link exclusive). So, the people who experienced mental agony from the fact that the Russian conservative patriots have not yet been consolidated, decided to also add a certain territorial zest to the country's public and political life. They decided to add and added: everyone phoned, they contacted and waved at the Pskov region - in Izborsk and directly Pskov itself. Why in Pskov, why in Izborsk? The creators of the Izborsk club declare that this city has always been the western outpost of the Russian State, and therefore it can be chosen as a club symbol. And they think correctly: without a symbol, nowhere is it now ... Someone calls himself by the Seliger Forum, someone by the liberal opposition united by Bolotnaya Square. Some are “Ours”, others are “Yours”, and others are “Someone's.” People, as they say, are looking for themselves in the modern diverse world, but our own legislation is not forbidden to search for ourselves.

When in the publications of the Russian media began to appear information about who will speak at, say so, the zero meeting of the Izborsk club (Lyudmila Narochnitskaya, Mikhail Leontyev, Minister of Culture Vladimir Medinsky, Pskov Governor Andrei Turchak), many had the impression that a peculiar course of the current government, which wants to create a certain counterbalance to the opposition movement, which is trying to raise its head higher and higher and open its mouth wide enough about and for no reason. At the same time, the phrase “the project of the Kremlin” was often referred to in connection with the Izbor club.

In this regard, as usual, there immediately appeared those who immediately saw in the creation of the club a deadly evil that would be cultivated exclusively by the Kremlin hands, and those who called the Izborsk club an organization-messiah that could finally create a real counterbalance to the liberal mass active in recent times. It would seem that the label of the “Kremlin project” entrenched itself with the “electors”, which means it will take a little more time and they will begin to act along the predicted way of promoting the interests of official Moscow.

However, the ways of the Lord are truly inscrutable, and some members of the Izborsk club have confirmed this fact. From the lips of these very members, they heard slogans that made some shrug their shoulders, others to wipe their eyes and clean their ears with the words “Wow! Well, you broke up, guys! ”But they really went out in earnest, so much so that many didn’t understand at all how to treat the loudly announced new initiatives. In recent months, an ordinary Russian has heard from the lips of the opposition that Russia has reached a dead end, Putin has been exploiting the country and making the Russians impoverished, evil, and unprincipled. Here, they say, Putin will leave - and our life will immediately improve: we will have enough to eat, women will start giving birth to five or six children, the army will rise, the West will respect us, in general, a bright future will come on the age-old liberal basis.

After the first speeches of the “Izbortsevs,” a similar tendency began to appear, only going to opposite extremes. One of the members of the club, writer Maxim Kalashnikov, laid out on the shelves what the priorities of the new social and political education should be. I will allow myself to list these priorities (rather, even the requirements):

1. Complete change of landmarks in economic policy.
2. The real fight against corruption.
3. The implementation of national cleansing.
4. Purging the government from completely discrediting liberal theorists.
5. Russia's unconditional renunciation of membership in the World Trade Organization.
6. The introduction of REP - sound economic policies based on the conduct of a fully sovereign national policy, the introduction of cheap credit policies for the real sector.
7. Full refusal of such pompous events as Olympida-2014, 2018 World Cup.
8. Providing financial assistance to manufacturers of domestic technology.
9. Creation of a project state from Russia on the basis of neo-industrialization, the super-fast Transnet, new energy, new education, new cities of the future.

Hmmm ... The requirements, as they say, are interesting, but it’s not entirely clear who Maxim Kalashnikov demands from all of this. It seems to be not from the current government, because in his electronic diary he calls the Russian authorities colonial-criminal, using such, of course, patriotic and politically correct words as “the moderation of the regime” and “intellectually wretched Putinism”. Certainly not from the liberal opposition, because at the moment its representatives are definitely far from ruling the country. Then from whom? Maybe from myself, maybe from each of us? .. But, first, all these demands of one of the active members of the very conservative-patriotic club suspiciously resemble the slogans of other organizations that took place in stories countries, and, secondly, they are more reminiscent of the classic oratoric shaking of the air, which (shaking) in different years was enough.

It will be quite interesting if other members of the Izborsk club think in the same direction as Maxim Kalashnikov ... No, who is against the fight against corruption or the improvement of the economic situation in the country. Of course, most adequate people only "for". But these calls for national cleansing, cleansing and complete nationalization of everything and everyone when building up to everything else a certain project state - this is too, excuse me. Apparently, we are living in a project state where everyone feels like it, and these same “designers” create slogans on how we can live better. Only here the whole trouble is that in order to translate these ideas into life it is necessary, for some reason, to break and destroy all the old. For some reason, few people get to draw attention to the ideas of continuing the development of the country on proven principles. No, you know, you need to clean everything up again, level it off, and then start some kind of neoindustrialization. Gentlemen, well, after all, this has already happened in our history, it has already been demolished to the ground, they have already started large-scale projects and even isolated from the rest of the world. And what all this ultimately led to, everyone knows too. Or, perhaps, the comrades from the Izborsk club think that they did not succeed, they will succeed. But this is absolutely naive.

Well, yes ... It is possible and to refuse international contacts, even foreign goods can not be purposefully purchased, you can print rubles on the machine as much as you need for the economy, but all this perfectly illustrates the saying "Step back on the same rake."

To speak in a multinational state that some kind of national cleansing is needed is already a mistake that can become fatal. From whom will we be cleansed? Russian from Tatars or, perhaps, Mari from Russian, Komi from Jews, Chechens from Ingush? .. So in world history already, at least one person who couldn’t sit in one place without "solving the national question" was first taken country, and then beyond. And where these ideas led the world, everyone knows perfectly well.

It is necessary to clarify that the Izborsky club itself was created at the initiative of Alexander Prokhanov, but the same Maxim Kalashnikov declares that he received a call from the Kremlin administration inviting him. At the same time, Kalashnikov is trying with all his might to disown the fact that he succumbed to the will of the authorities. Like, we all moved to Izborsk in order to demonstrate to the whole world that we are not going to play the role of “court sages”. Apparently, all the above slogans are displayed as confirmation of his words.
This, of course, is a position that can and should be respected, but one thing is not clear: if the “electors” are going to promote the idea of ​​the Eurasianism of Russia (as many of them themselves say), certain sovereign ideals, especially conservative ideas of economic development, but this does not rely, it turns out that the Kremlin itself is raising another opponent. Isn't it enough for him, perhaps, the very “swamp” opposition? Is there really the most notorious quenching of fire with kerosene? ..

Honestly, I can hardly believe it. Apparently, as it happens with us, the creation of the next socio-political organization itself took place, the symbols were chosen, but what this organization tends to do is not even clear to the participants themselves. The main thing is to emit more words like “patriotism”, “revival of the Russian people”, “national self-sufficiency”, and nobody knows where these words will lead to. But is it necessary to know? .. The main focus is to attract: more words - more shouts of “yes!”, “It should be so!”, “Give!” But if you give, then what and how?

New economy is how? Do members of the Izborsk club know any alternative development paths, except “land for the peasants, factories for the workers, money for the oligarchs”? If you know, I would like to see all this in program form. After all, anyone can scream. If you wish, you can build your club with no less impressive slogans: “To all the poor - a million euros and an apartment in Moscow!”, “The ruble should be a hundred times more expensive than a dollar!”, “The USA is a new region of Russia!”, “Corruptionists” - to the wall! ”And what, really bad slogans? ..

In general, by whom the creation of such a project as the Izborsky club would be initiated, as long as it is present, forgive generously, terry populism. Coming together hundreds of kilometers from Moscow to criticize liberals over a cup of tea ... If the whole essence of the club is in this, then we have our own club in every kitchen - if not Izborsky, but the meaning is the same: after a beer, everyone knows how to beat corruption how to make the economy competitive and how to solve the demographic problem. But as soon as it comes to real action - it turns out, according to a well-known politician, that they only wanted the best ...