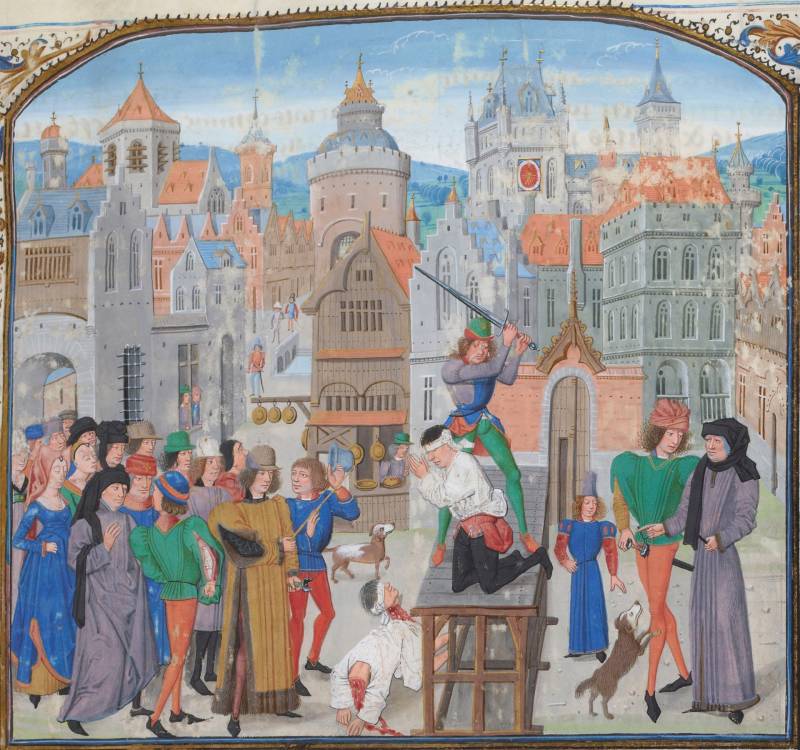 The beheading of Lord Guillaume Sans by the sword. Miniature from the Chronicles of Froissard 1470. National Library of France, Paris

But Samuel said: As your sword took away children from wives, so let your mother be deprived of her son among women. And Samuel cut Agag apart before the Lord in Gilgal.
15 Samuel 33:XNUMX
"If you live in virtue,
The sword of justice cannot cut your head! "
"When I raise this sword,
I wish the poor sinner eternal life "
Inscriptions on the blade of one of the swords of justice by the gunsmith Johannes Boygel of Solingen, 1676
History weapons. An article on this "butchery theme" appeared by accident. One of the readers saw this sword in a museum, and another suggested that I contact one of our Russian museums and get information about it there. But ... there is nothing worse than contacting our museums. It's like playing roulette: you can get everything, but you can only waste your time for nothing. Therefore, it is easier to find the same thing in museums abroad. And still very many readers on VO like to look at miniatures from the famous "Chronicles of Froissard". There are many of them and they are all very informative and remarkable in their own way. Today we will kill two birds with one stone: once again we will look at miniatures from Froissard's chronicles and get acquainted with one more historical murder weapon. 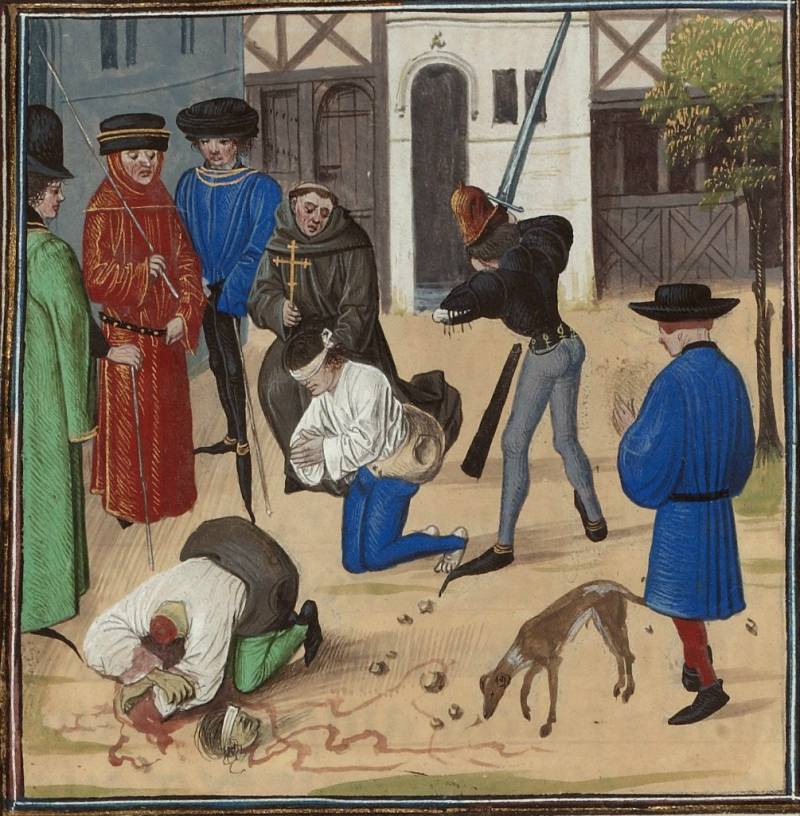 The execution of the Breton knights Pierre and Alain Roux. Illustration of one of the lists of Froissard's chronicles
Well, let's start with the fact that in the history of edged weapons, the executioner's sword or "sword of justice" occupies a special place. This sword cannot be included in Oakeshott's typology, but, nevertheless, it exists, and at one time it was quite widely used. 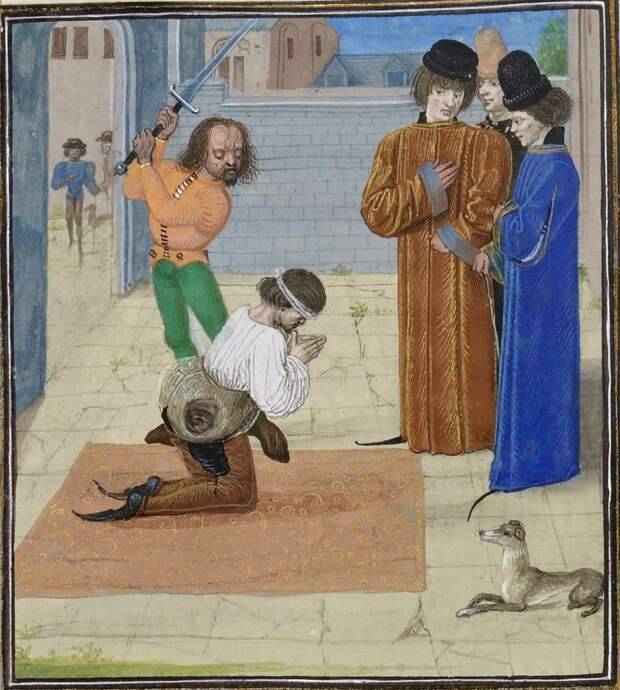 Execution of Robert Tresiglian, cousin of the Duke of Ireland. Illustration of one of the lists of Froissard's chronicles
In the Middle Ages, when it was possible to say goodbye to life in general, the fastest execution (and merciful, moreover!) Was execution by beheading with an ax. But the sword was also used, and it was mainly aristocrats who were executed with it. The "peasant" ax was for commoners. However, in addition to status, because the sword, as we know, at that time was a status weapon, there was also a purely practical attitude to the matter. The geometry of the blade of the sword is completely different than that of the ax. Therefore, it was believed that the person executed with the sword experiences less suffering. That is why it was the aristocrats who were executed with the sword: higher honor and less pain. 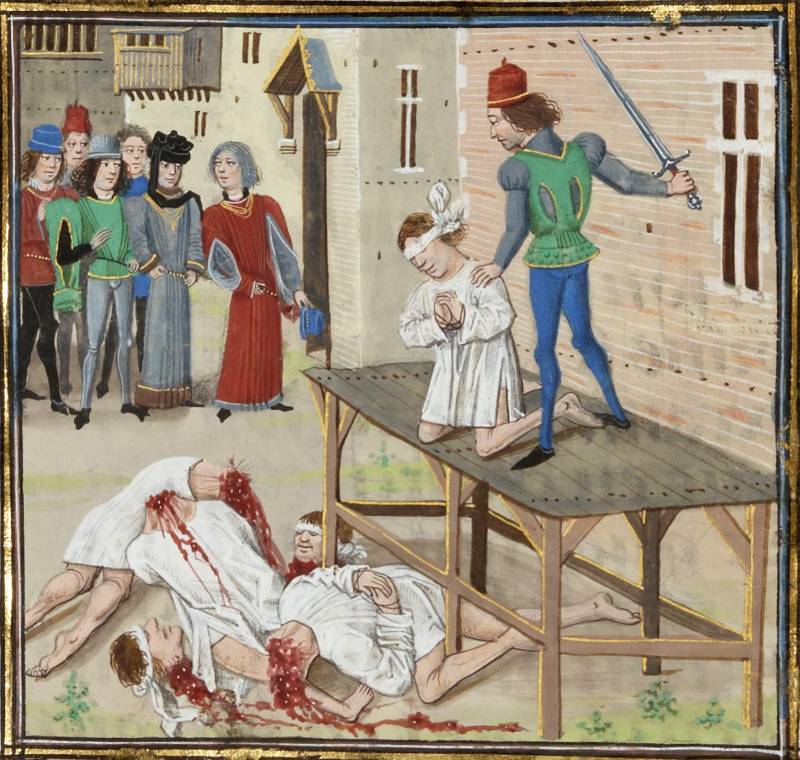 Execution of Olivier de Clisson and Breton knights accused of treason (1343). "The Chronicles of Fraussard" 1470 National Library of France, Paris
True, they, poor fellows, also got it. For sodomy, they were supposed to be burned at the stake, and for inclinations to this sin in the same England (as well as for rebellion and treason to the king!) They invented execution on the stairs. Its essence consisted in the fact that a person was tied to a higher staircase so that everyone could clearly see him, after which the executioner opened him with a sharp knife, pulled out the entrails and burned them in front of him at the stake, the execution also ended with emasculation. 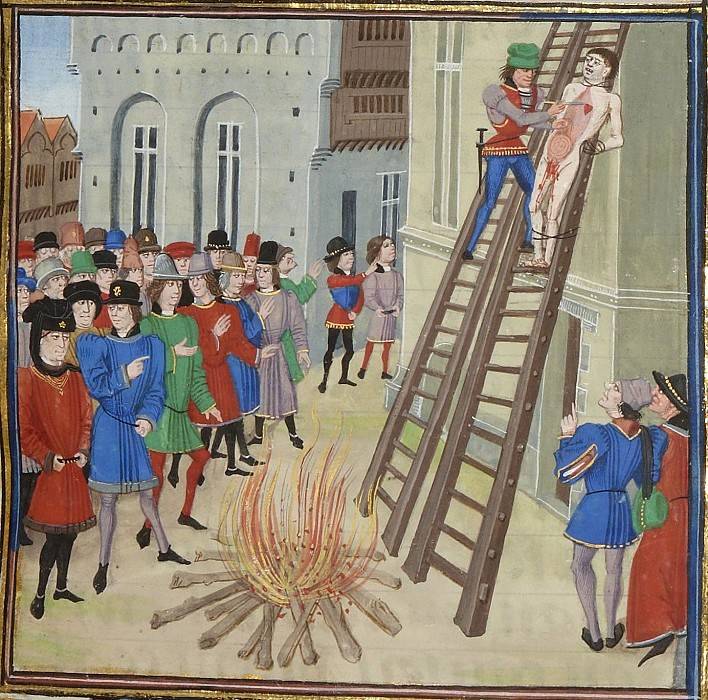 Execution of Hugo Dispenser, favorite of Edward II. "The Chronicles of Fraussard" 1470 National Library of France, Paris
Nevertheless, out of respect for the rank of nobility, even traitors whose guilt was proven or it was believed that it was proven, most often they were executed with the sword. In addition, there were not so many hunters, even for money, to delve into smelly guts. To blow off a man's head with one blow - yes, here you have both skill and strength! 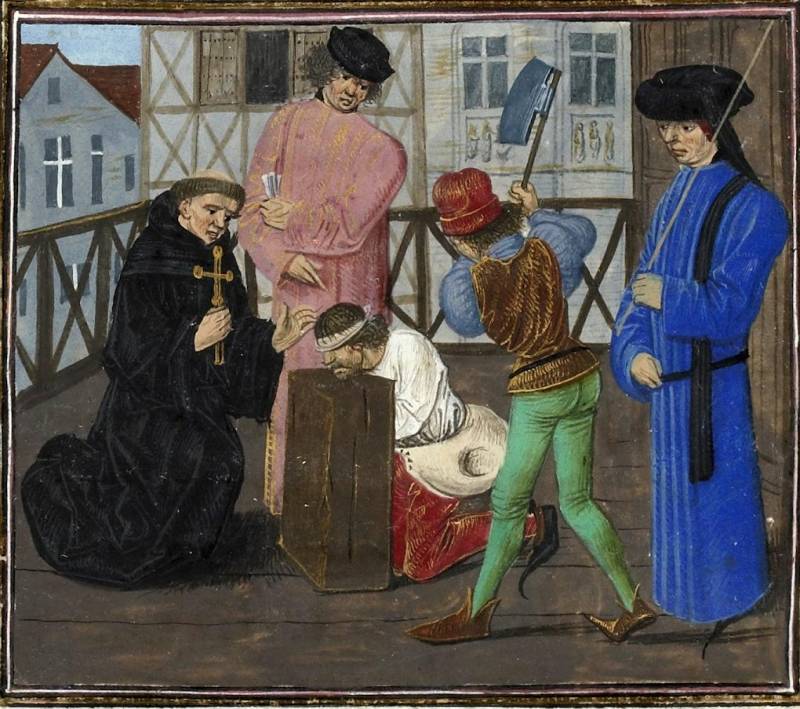 Execution of Emerigo Marcel. Illustration of one of the lists of Froissard's chronicles
The situation changed in the XNUMXth century. The burgher class, which was gaining strength, demanded honor and place for itself, and this was expressed even in the fact that now the burghers began to be executed with a sword, and not with an ax, as it was before. However, even here, no concession to chivalry was done - or, let's say, these concessions were of a mutual nature. It turned out to be impossible to execute people of an ignoble title with a noble knightly sword, and for this a sword was invented ... without a tip, which did an excellent job, but a priori could not be a weapon, and therefore - and nobility in it was gone! 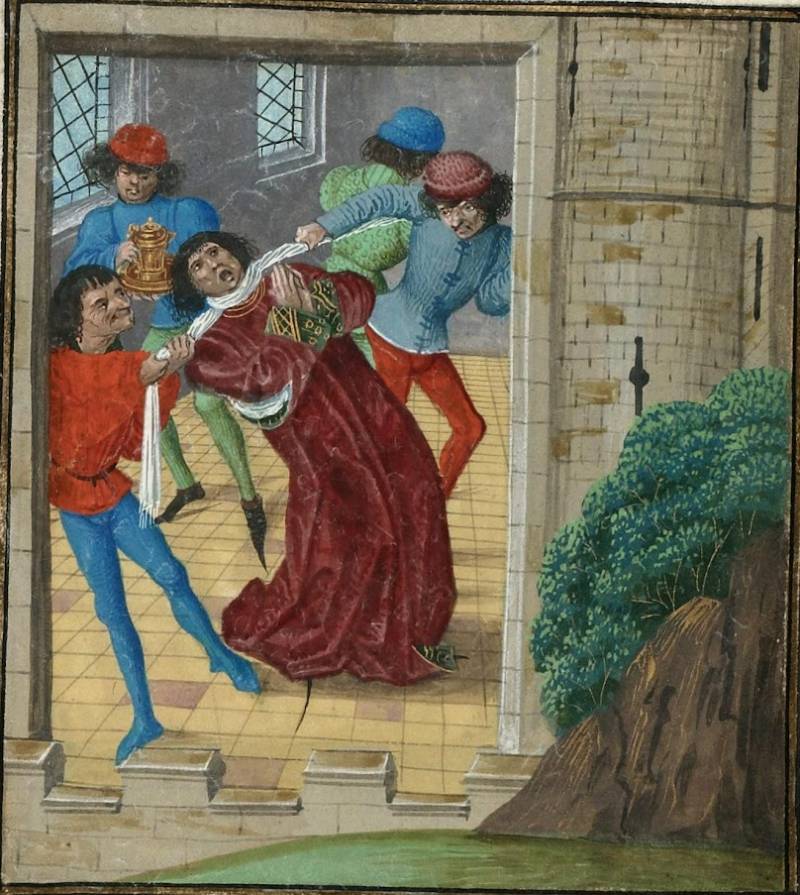 And they could have killed like that! Assassination of Thomas Woodstock, Duke of Gloucester, at Calais in 1397. Illustration of one of the lists of Froissard's chronicles
The earliest sword of justice that has survived to our time dates back to 1540, and it was made in Germany. The "heyday" of swords of justice falls on the 1893th century, and by the beginning of the XNUMXth century they had already completely gone out of fashion. Although in Germany, the last execution with a sword was carried out ... in XNUMX, when a woman poisoner was executed with his help. 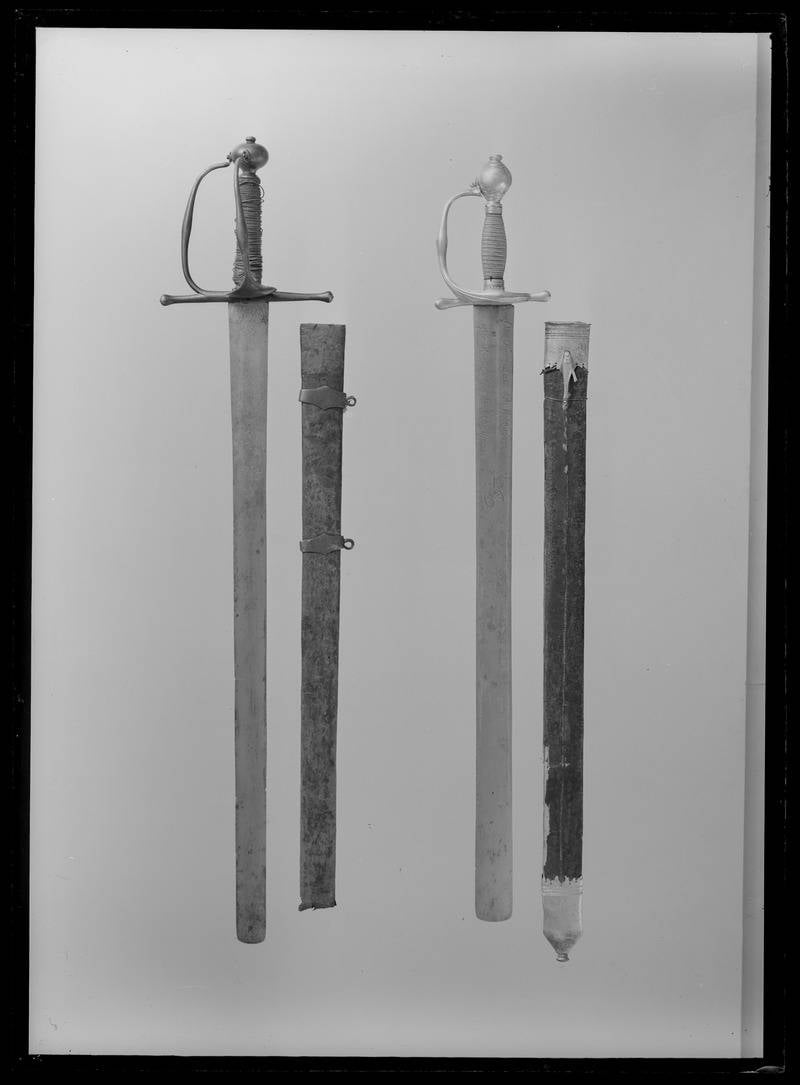 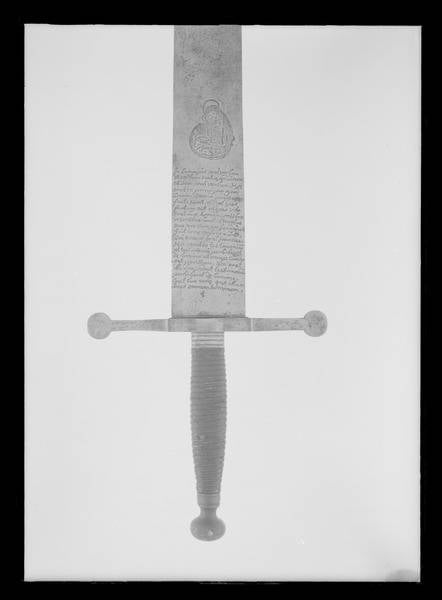 The hilt of one of the swords of justice from the Royal Armories in Stockholm with an edifying inscription ... 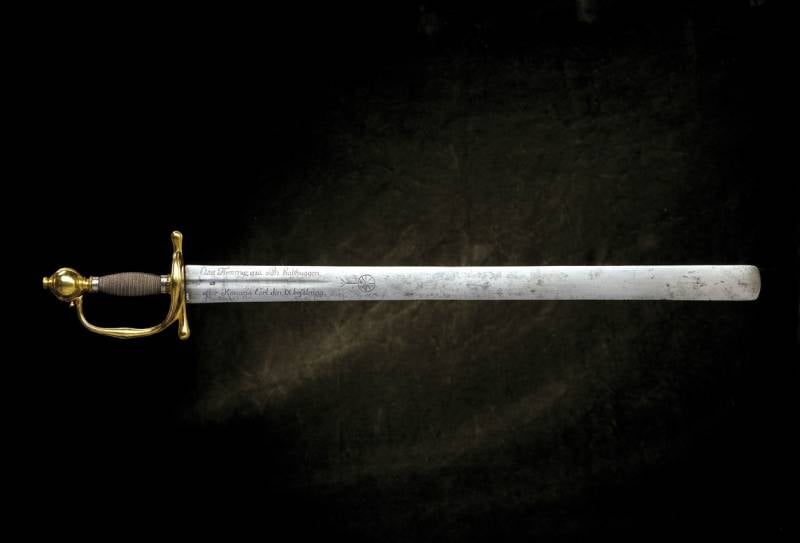 Executioner's sword: handle - Sweden, mid-1,950th century, blade - Germany, late 54th century. Weight: 825 g, width: 1025 mm, blade length: XNUMX mm, total length: XNUMX mm. Royal Armory, Stockholm
For some reason, the sword of justice did not take root in England. There they executed with an ax both the noble and the rootless, and did not consider it something reprehensible. However, there were cases when noble people were executed there with the sword. In particular, it was with the sword of justice that the second wife of Henry VIII, Anne Boleyn, was executed. Moreover, the king ordered the executioner to be discharged from Saint-Omer, since there were few such “masters” in England, and the king's wife was still subject to execution. And, I must say that the executioner did not shame his art and took off her head with one blow, however, and Anna's neck was thin ...

Executioner's sword from the collection of the Tower of London, ground floor, west wing. Dated to 1657. The cruciform hilt of this two-handed sword has a massive egg-shaped pommel in the shape of a "vase" with a "button" protruding from above. The wide flat double-edged blade has a slight chamfer along the edges without a sharp point. The blade bears the estimated date of manufacture ("ANNO: 1-6-5-7") and also the master's mark. Overall dimensions: blade length 1000 mm, blade width 65 mm, total length 1290 mm, total weight 2360 g, handle length 290 mm, handle width 55 mm. The stigma of the master: a head in a helmet, in profile, with a wide collar on the shoulders, a helmet with a plume. This is the mark of Vira bruk, a gunsmith from Sweden.
Well, the example of the execution of Count Chalet in France in 1626 testifies to how important the specialist in "painless executions" was. Then some inexperienced volunteer had to execute the count and it took him as many as 29 sword strikes for this! It was not so if the master took up the case. In 1501, the executioner cut off the heads of two convicts with one blow: he tied them back to back and ... w-ah-ah - immediately blew their heads off!

Scottish sword of justice, 1600-1630 A two-handed sword, the so-called "Claymore" with a German blade, as indicated by the stamp depicting a running wolf. Blade length 1000 mm, blade width 55 mm, total length 1400 mm, total weight 2353 Tower of London, ground floor, west wing
Executioners' swords, as a rule, had one and a half-hand (bastards) or two-handed handles and the simplest straight arches of the cross. The tip was not there because it was not required. That is, such a sword, according to Oakshott's typology, can be described as a sword of "type XIIIa, but without a point." The blades of such swords were very wide - from 6 to 7 cm, and the total length was similar to the length of bastard swords. The weight was also greater - from 1,7 to 2,3 kg, that is, this instrument was not an easy one.

Swords of Justice from the collection of the Royal Armories in Stockholm
True, the blades often had valleys for relief. Another feature was the engraving on the blades. Symbols of justice were depicted, as well as inscriptions of edifying content: “Fear God and love right, and the angel will be your servant». 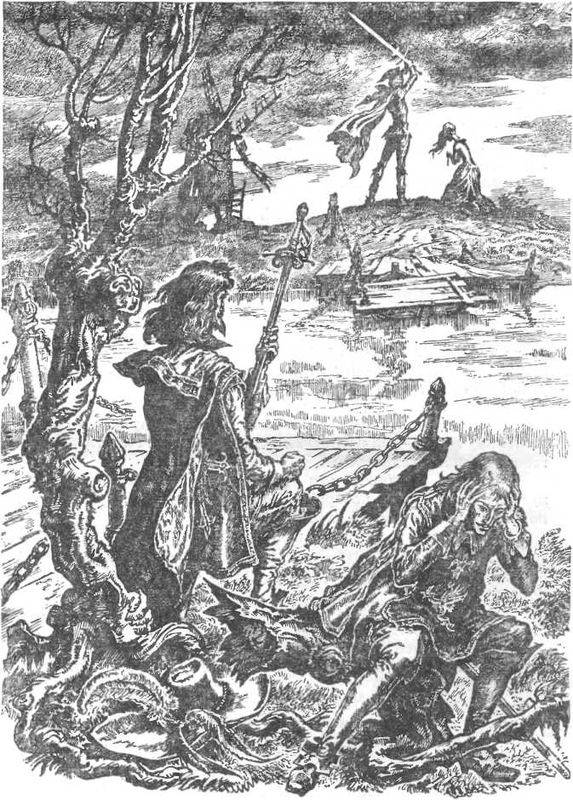 Illustration from the novel by A. Dumas "The Three Musketeers" by the artist I.S. Kuskov (1990). The executioner is holding a sword, as it is written about. But this is not at all the sword that a French executioner would have acted!
It is interesting that in A. Dumas's novel The Three Musketeers the Lilian executioner also executes my lady with a sword, but in the illustration for this book, published in the Adventure Library series, in his hands is depicted not the sword of justice, but the sword of the landsknecht. Apparently, the illustrator simply did not know such subtleties at that time.

Ctrl Enter
Noticed oshЫbku Highlight text and press. Ctrl + Enter
We are
Japanese sword: deeper and deeper ... (part of 1)Sword - as a symbol of the Middle Ages
Military Reviewin Yandex News
Military Reviewin Google News
205 comments
Information
Dear reader, to leave comments on the publication, you must sign in.