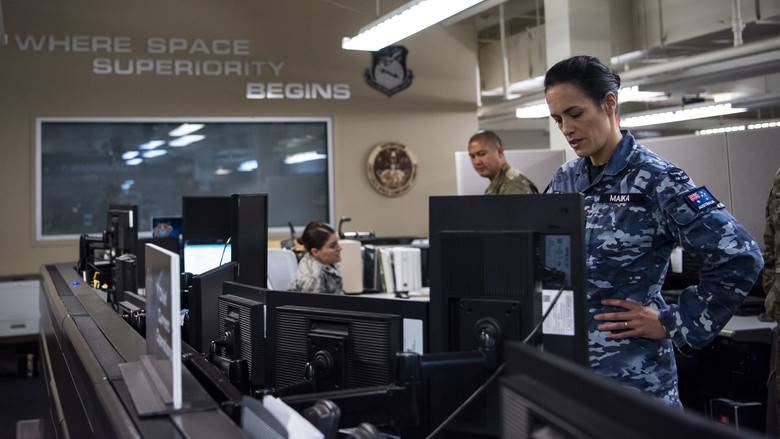 The combat capability of the US Army largely depends on the orbital grouping, which includes vehicles for various purposes. Any threats to satellites lead to additional risks for all other structures of the army. In this regard, the Space Force (USSF) was created, one of the tasks of which is to ensure the stability of the orbital group. Active work has been launched in this direction, but so far they are mainly reduced to theoretical research, and projects of real samples and systems are still in the early stages.

The USSF and related structures, showing their need, regularly raise the topic of real and potential threats in outer space. Some solutions to this problem are also proposed. A few days ago, the next Space Symposium was held in Colorado Springs, at which representatives of various structures of the Pentagon and commercial organizations related to space exploration took part.

During the symposium, the representative of the Space Command, General J. Shaw, once again reminded that battles in space cease to be fantasy and are gradually turning into a real scenario. Developed countries are developing weapon for use against a space group, and it is necessary to respond to this. 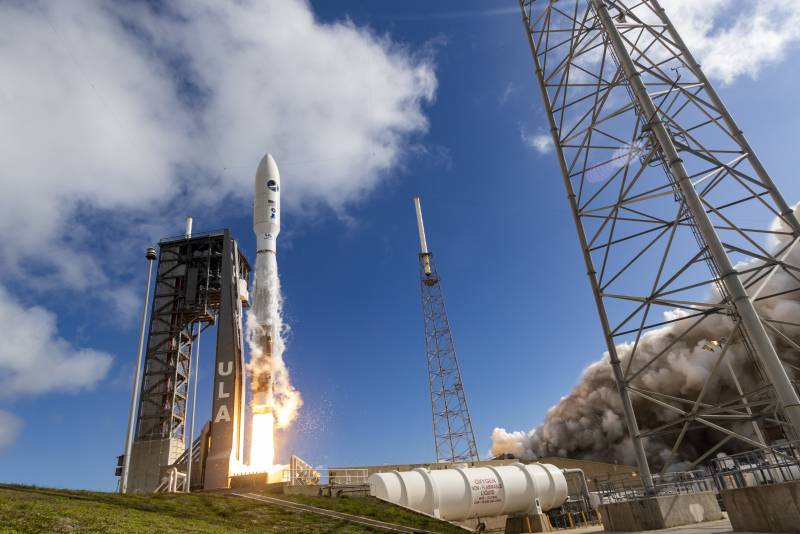 UFFS-7 launch - Atlas V launch vehicle with military satellite, May 2020
The USSF is reportedly actively working on the issue of threats and responses to them. A promising Doctrine of war in outer space is being formed right now. In addition, new projects are being developed with an eye to practical application. However, all these processes are in the early stages. As General Shaw noted, the Pentagon is just beginning to understand what war in space is.

The development of foreign anti-satellite weapons is currently of particular concern. The US defense depends on the spacecraft, but each satellite, as one of the American generals aptly put it, is "a big, fat and easily accessible target." This is not only about the defeat and destruction of such equipment. The non-destructive effect of the enemy can also have negative consequences.

Pentagon officials remind that China and Russia, considered as geopolitical rivals, already have anti-space weapons. These are laser and electronic means of suppression, as well as special missiles and satellites capable of striking orbital targets. Probably, other systems with high potential are being developed. 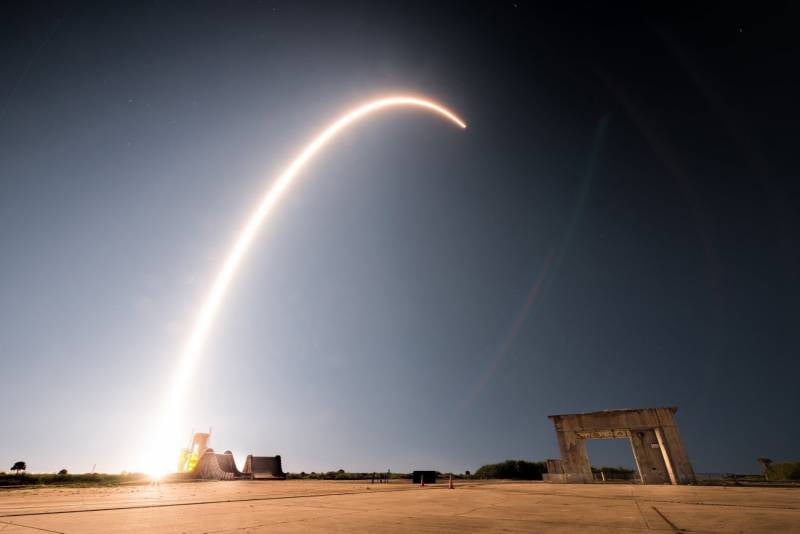 Falcon 9 rocket flight with military load, January 2020
An additional threat is the dependence of the military on commercial spacecraft, and this is associated with risks to both the military and civilian structures. In the event of a conflict, commercial satellites, like USSF assets, will become targets for early attacks - and not only the military will suffer as a result.

Representatives of the L3Harris and Comspoc companies in their reports described the possible options for attacks and the escalation of such hostilities. Such events can begin with a "reversible attack" - the use of electronic warfare or cyber weapons to temporarily disable individual spacecraft or entire groups. If such measures do not give the desired results, the enemy can use means of destruction that can completely disable the target.

It is noted that "reversible attacks" have already become a real threat. Attempts to hack various satellite constellations and ground infrastructure are regularly recorded. In addition, in recent years, the Pentagon has repeatedly noted the suspicious activity of third countries aimed at interfering with the current operations of the armed forces.

The USSF is responsible for the operability of the space group and the provision of "services" to other military structures, and is actively seeking new ideas, concepts and designs for solving such problems. Reportedly, some of them have already been brought into operation, but other developments will be implemented only in the future. 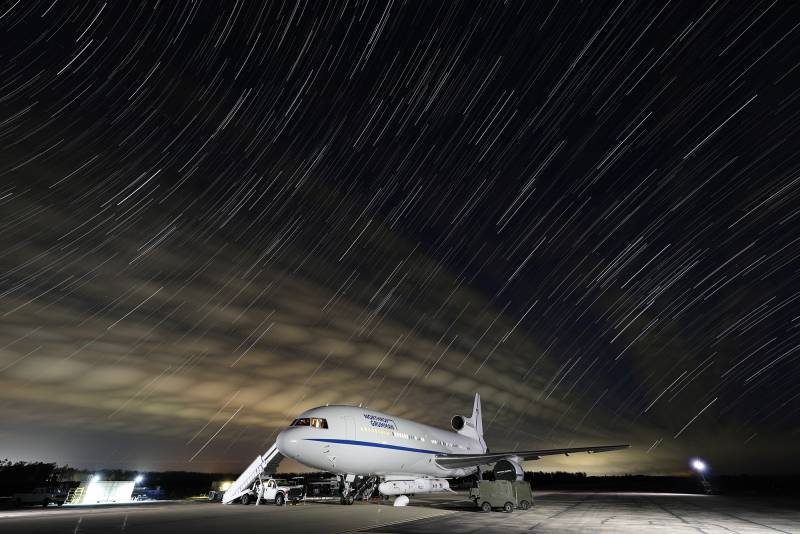 Preparation of carrier aircraft with Pegasus rocket, June 2021
There is some information about the availability of cyber weapons and other systems capable of protecting satellites from various types of attacks. In this case, the details are often not specified. Last year, it was reported that the USSF had adopted a ground-based electronic warfare system developed by L3Harris. This product has defensive and offensive capabilities, but other details were not provided.

Not so long ago, the American media reported about the imminent presentation of some unknown weapon for the Space Forces. It is already ready for commissioning and operation, but the premiere had to be postponed indefinitely. At the same time, any details of a technical or other nature have not yet been published.

At the same time, a number of proposals of various kinds are being worked out, making it possible to increase the stability of the grouping as a whole and of individual apparatuses. The most radical thing is to change the basic principles of the formation of orbital forces. Instead of a limited number of "Big and Fat" satellites in high orbits, it is proposed to use a larger number of lighter, cheaper and simpler spacecraft for launching spacecraft with similar functions.

Such a grouping, with its correct construction, will be able to solve all the assigned tasks, but it will show increased stability. In the event of a conflict, a large number of satellites will overload the enemy's anti-space defense and will not allow serious damage to the grouping as a whole. At the same time, it will be possible to recover the losses faster and cheaper. 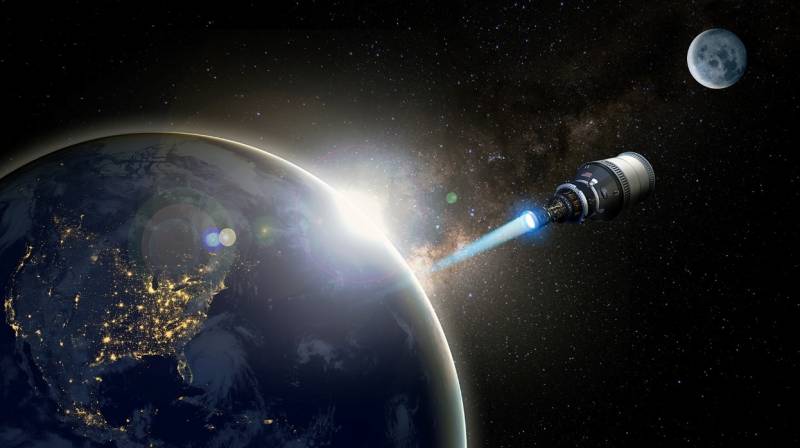 Demonstration of the capabilities of the DRACO system
However, not all satellites can be made light and cheap without performance loss. In this case, DARPA is working on another concept, which provides for the withdrawal of the spacecraft from the impact. Within the framework of the DRACO project, the possibility of creating a nuclear rocket propulsion system for mounting on spacecraft and ships is being studied. In the coming years, it is planned to test the technology demonstrator.

In case of danger, the DRACO system will have to transfer the satellite to a higher orbit, making it inaccessible to enemy missiles. After the disappearance of the threat, it is proposed to perform the reverse maneuver. Nuclear fuel will make it possible to make such transitions more than once, thanks to which the spacecraft will be safe for a long time, until the end of service.

New technologies are expected to be able to protect vehicles in orbit from various enemy weapons. However, the real effect of such developments will only be possible in the distant future, while the potential adversary already has anti-satellite weapons. Accordingly, in the short term, the Space Forces will have to rely only on available developments and solutions. 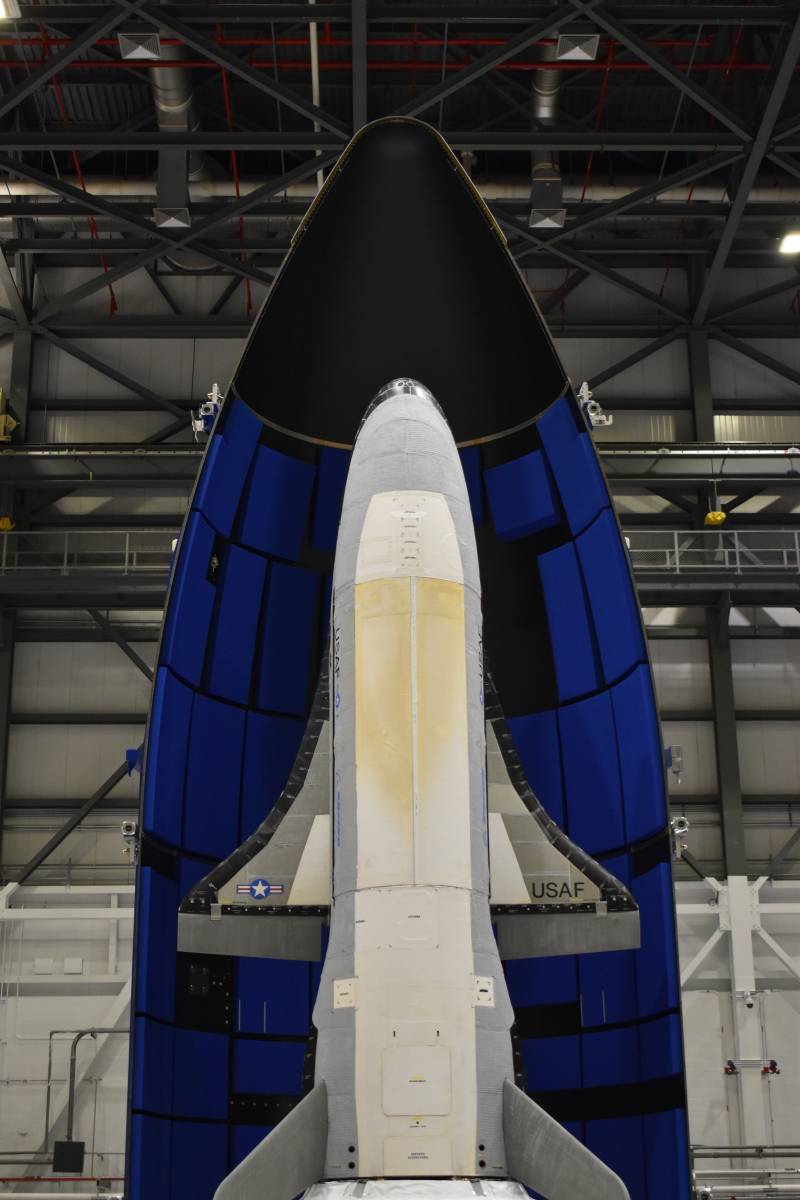 Unmanned spaceplane X-37B. According to various estimates, it has defensive and striking capabilities.
It is necessary to develop a system for preparing and carrying out launches, as well as to create a stock of vehicles to make up for losses. When developing a spacecraft, it is necessary to take into account the issues of protection against optical and radio-electronic interference, and the entire infrastructure must be protected from hacking. Already at the level of these measures, it will be possible to ensure a sufficiently high stability of the orbital constellation, and within a reasonable time frame and without unnecessary spending.

According to the current Pentagon strategies, the newly created US Space Force is responsible for the operation of the orbital group and for conducting various operations in outer space. Space forces will have to carry out all kinds of defenses, as well as participate in offensive operations.

At the moment, the USSF cannot perform all the desired tasks, and in fact it is only about ensuring the activities of the space group. Also, the first measures are being taken to create and strengthen its defensive potential. Moreover, judging by the open publications and statements, it is this direction that is a priority. There is also reason to believe that strike systems are also being developed - but these projects are classified and / or far from being accepted into service.

The reasons for this distribution of efforts are obvious. The activity and combat effectiveness of the US armed forces depends on the space group, and potential adversaries already have the ability to suppress or defeat it. In such conditions, it is more reasonable to direct resources to protect their own spacecraft, and not to fight against strangers. In addition, the emphasis on protection and resilience distracts attention from closed-circuit strike designs. And it works for the image of the Space Forces as brave defenders of national interests.