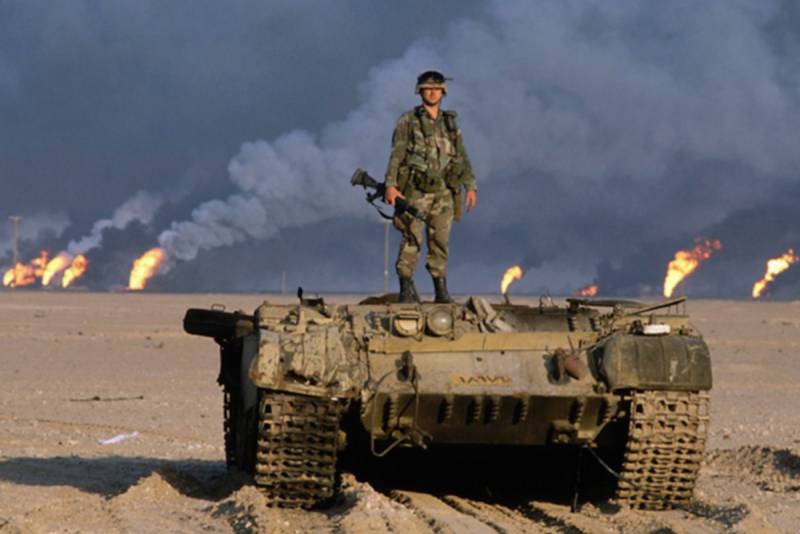 Americans regard the 1991 Iraqi campaign as almost a national feat. Indeed, the victory was won in a record 100 hours over the fourth largest army in the world. And the frames of the destroyed tanks for a long time entered the consciousness of Western inhabitants as symbols of the inferiority of Soviet military equipment.

The defeat of Saddam Hussein's troops was predetermined already in the first months after his reckless invasion of Kuwait in August 1990. By and large, the NATO leadership would not have time to settle the next showdown in the Middle East, if not for two "buts". First, the Soviet Union was no longer able to defend its interests in the region, which actually freed the hands of any initiatives of the North Atlantic Alliance. Secondly, Iraqi troops encroached on the sphere of oil interests of the United States, and this could not be left without operational intervention. Otherwise, the blatant annexation of Kuwait could become the norm for the Gulf states.

What kind of wars would have unfolded in the region and how much oil prices would have risen is anyone's guess. That is why, together with the armies of the West, Egypt and Syria came out against Hussein, providing several of their divisions. All countries of the League of Arab States, except Jordan and the Palestine Liberation Organization, have declared their support for NATO. It is worth paying special attention to the peculiar policy of the United States in this stories - A few days before the Iraqi aggression, the US Ambassador to Iraq April Glaspie assured Hussein that the Americans would not interfere in the showdown with Kuwait. 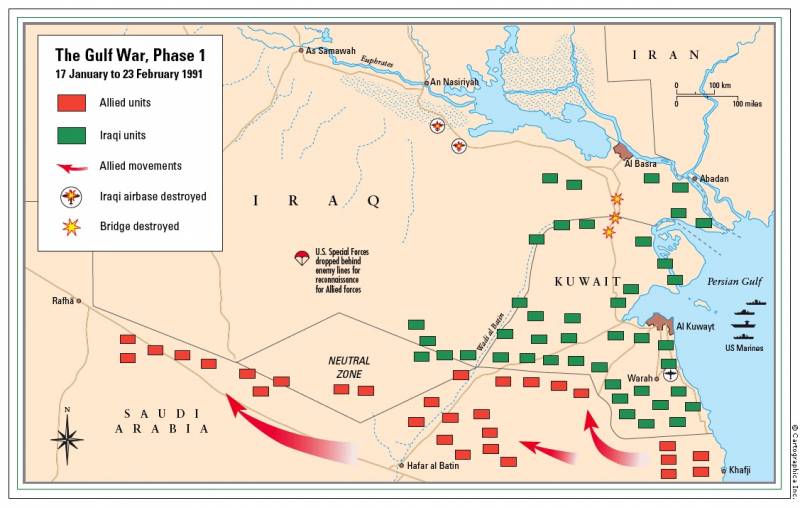 Disposition in front of the ground part of the operation. Source: bp.blogspot.com
This gave Baghdad additional confidence. But by January 1991, the Americans, with the support of 27 countries, had concentrated a powerful strike fist of 730 people. The Americans alone used about 250 of their own transport aircraft, as well as several chartered in the USSR, for airlifting military equipment by air. This army was deployed in Saudi Arabia and received little or no attacks from Baghdad. Two Iraqi brigades that tried to invade the Saudis do not count - the units were attacked by the local army with the support of the American aviation and quickly returned home. It is difficult to understand why NATO's multinational forces were given the opportunity to calmly turn around and concentrate to strike. On the one hand, Hussein feared the involvement of the Saudis in the conflict, and on the other, this was the beginning of the end of his small victorious war. Iraq has deployed against the coalition a southern group of troops, consisting of 400 thousand people, 3,4 thousand tanks, 4,8 thousand guns and 480 aircraft. Considering the predominantly defensive nature of the Iraqi army's actions, the superiority of the enemy's forces in certain categories was not overwhelming. According to experts, the superiority in manpower was 1,8 times, in tanks - 1,6 times, in combat aircraft - 5 times and in the number of ships - 14 times. The Iraqi army was stronger than the combined coalition forces in terms of the number of artillery barrels. At the same time, the total Iraqi army was an impressive force of 1,8 million personnel, 5,5 thousand tanks, 700 aircraft and more than 7,5 thousand guns and mortars. The training of Saddam Hussein's troops was at a high level - the great experience of the war with Iran affected. But the initial strategy of passive defense in depth did not pay off. Iraqi generals calmly watched as the coalition concentrated forces, and then launched the first airstrikes as part of Operation Desert Shield. As a result, instead of the planned 13 days, the anti-Iraqi coalition managed in just 100 hours.

The main striking force in the land operation was the American armored divisions of the 7th Corps, which advanced in the center of the front. The corps included 142 thousand personnel, more than one and a half thousand tanks, the same number of infantry fighting vehicles, 700 artillery pieces and 223 helicopters. The corps also included an English armored division. In addition to the US tankmen, on February 24, 1991, the French, Syrians, Saudis, Kuwaitis, Egyptians and British joined the battle on the remaining flanks. Ground units stealthily advanced into northern Iraq and attacked the flank of Hussein's army in Kuwait. The offensive proceeded soon and already on the third day, February 26, the vanguard of the 7th corps east of El Busay met with the first Iraqi T-72. The car was from security and was promptly destroyed by the forces of the 2nd armored cavalry regiment, which was located at the very edge of the American armada. According to the recollections of American soldiers, the entrenched tank managed to make one inaccurate shot and was hit by ATGM fire. It was during this large-scale offensive that the Americans truly felt the beauty of GPS navigation - there was not a single landmark in the desert for tens of kilometers. Except, of course, the burning oil wells left behind by the retreating Iraqis. They set fire to oil to disguise against the ubiquitous NATO aircraft, as well as to protect against thermal imaging sights. A sandstorm was added to all the difficulties of the desert march, which did not allow the Americans to raise fire support helicopters into the air on the morning of February 26. At the initial stages of the operation, it was air support that was of key importance in the fight against enemy tanks and artillery. The Apaches, together with the A-6 and A-10 attack aircraft, knocked out up to 30% of the Iraqi armored vehicles during the air operation. Therefore, if flying weather had occurred on February 26, then a considerable part of the armored vehicles that had dug in in the 7th corps' offensive zone would have been destroyed. And the epic battle, or rather the beating of Iraqi tanks, which went down in history as 73 Easting Battle, would not have happened. The name of the battle was given in honor of the nearest object on the operational maps of the US Army. 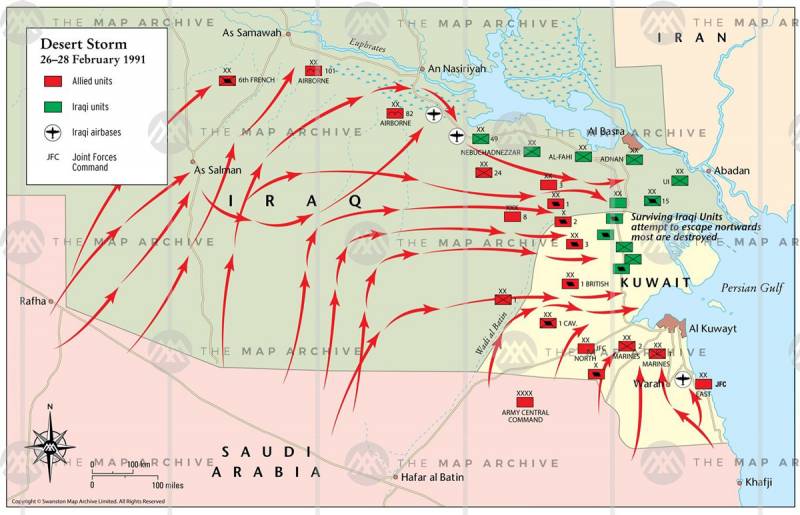 Desert Storm. Ground part of the operation. Source: livejournal.com
Consider the tactics of the 7th Corps armored units. Tanks advanced on a wide front with an average daily speed of up to 3 km / h, in rare cases it was possible to accelerate to 10-15 km / h. Typical configurations on the battlefield were “line partly in line, partly backward” up to 1,5 km deep, as well as line formation. It was absolutely impossible to move in a column because of the many kilometers of dust clouds from the tracks of the moving vehicles. The first were tanks, behind at a distance of a kilometer from BMPs, providing cover from RPGs, infantry and ATGMs. An important advantage of Western armored vehicles were perfect guidance and night vision devices. Through thermal imagers, NATO members saw T-72, T-62 and T-55 at a distance of up to 2,5 km. They opened fire earlier, hit more accurately due to the better training of the gunners, and shells with depleted uranium ensured reliable defeat of outdated Soviet-made tanks. Abrams M-1, AMX-30 and Challengers fired at Iraqi tanks from long distances - this was the most common clash of armored vehicles during Desert Storm. But even when there were rare clashes at arm's length, the Iraqi tankers showed themselves not from the best side. According to veterans of the operation, Iraqi infantry fighting vehicles often failed to hit stationary targets at a distance of 400-500 meters. The anti-tank defense was very poorly organized - the Iraqis could not really use either the large stocks of the Malyutka ATGM or hit the armored vehicles from the RPG at the close range.

The M60A1 tanks of the 1st US Marine Division were not equipped with such advanced optics as the Abrams, but, nevertheless, in the area of ​​the Al-Burkan oil field, they managed to destroy more than 100 enemy tanks from a short distance without losses. It happened on February 25, 1991 in conditions of high smoke from burning wells and dust fog from another storm. This largely equalized the chances of relatively modern M60A1 and outdated T-55, but the Iraqis could not take advantage of this. 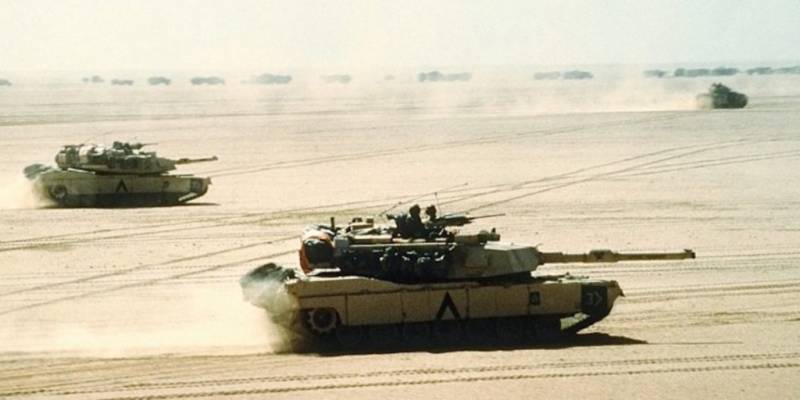 Source: coffeeordie.com
Let's return to the front of the 7th Corps offensive, in front of which the tanks of the elite division "Tawakalna", which the command of the Iraqi army threw to intercept the advancing coalition forces, stood up. It consisted of up to 220 T-72 and T-72 tanks, from light armored vehicles - 280 infantry fighting vehicles and armored personnel carriers. The Tawakalna was the most belligerent division in the Iraqi army, the first to enter Kuwait, and by February 26, it retained its relative combat capability. Having destroyed several scattered entrenched T-55s, the tankmen of the 2nd squadron of the 2nd armored cavalry regiment by 16:00 flew into the T-72 from the Tavakalna. In the course of a short battle, several Iraqi vehicles were destroyed, the regiment advanced further and started a firefight, in which 28 T-72s and 16 infantry fighting vehicles were killed. All this took place without losses on the part of the coalition and in just 23 minutes. In addition to the Iraqi Guards Tank Division, the 12th Brigade of the 9th Armored Division, parts of the 52nd Armored Division and the remnants of other tank units participated in the battles. Here the technique is motley - there were T-62s, and sometimes completely outdated T-55s were thrown into the attack against the Abrams. The Americans managed to place the main forces at the local dominant height, from which, as if on a training ground, they shot the counter-attacking Iraqi tanks. That is why it is impossible to consider the battle at 73 Easting as an analogue of Prokhorovka - the battle was fought at long distances, and the Iraqis often did not even see where they were being targeted at. In addition, most of the Tavakalna's tanks were dug in, and the crews, at the time of the enemy's attack, outside the vehicles were preparing for the next air raid. An air strike did not happen, but the rapidly advancing coalition troops killed a lot of manpower when they returned to armored vehicles. The Abrams were especially effective at night, when the T-72s were forced to return fire, focusing on the flashes of enemy tank guns - the initiative was on the side of the coalition. In addition, the Americans opened accurate fire from 2-2,5 kilometers, which the Iraqi tankers were not capable of. In addition, the T-72s were fired at the Abrams with obsolete armor-piercing shells, which had already been discontinued in the USSR. 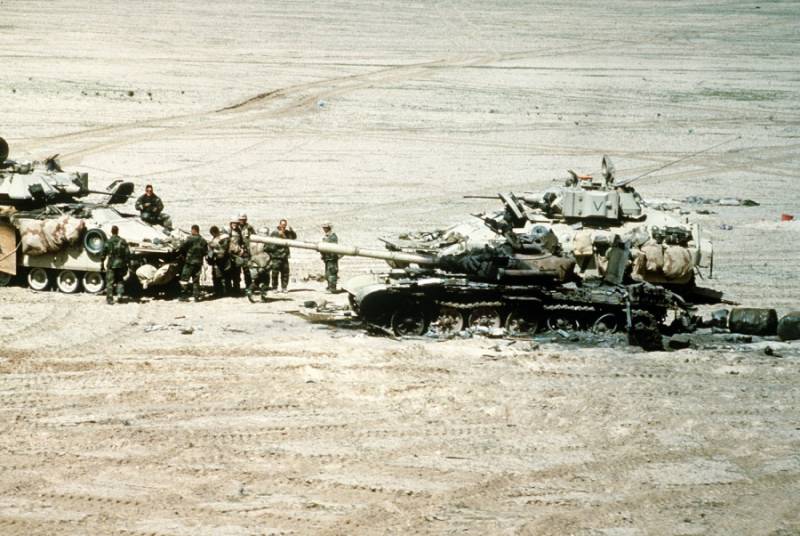 Source: coffeeordie.com
By the morning of February 27, the company, which was repelling the main attacks of the Tavalkalna, had no tank shells and anti-tank guided missiles left. The situation was saved by the timely artillery that cut off the enemy from reinforcements with MLRS missiles and shells. As a result, under the fire of ATGM, tank guns and artillery, two brigades of the Republican Guard were killed - 160 tanks, 180 infantry fighting vehicles and armored personnel carriers, as well as 12 artillery pieces. The coalition lost only one fighter from the crew of the reconnaissance "Bradley-M3" - it was hit by an Iraqi BMP-1 shell.