Victory Day of Russian regiments in the Battle of Kulikovo 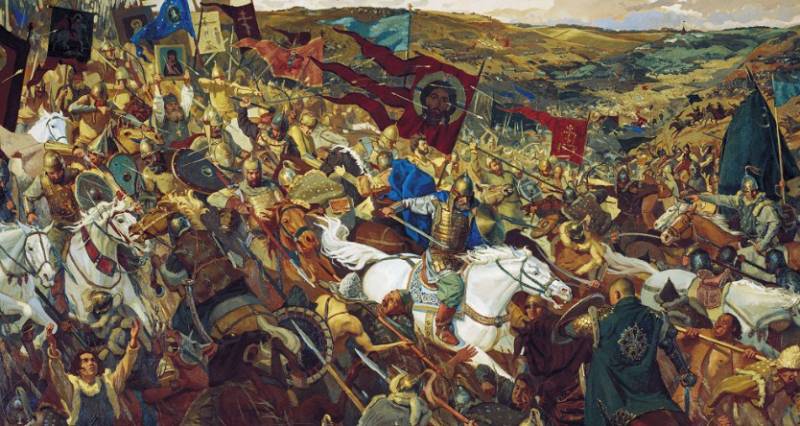 Today our country celebrates the Victory Day of the Russian regiments in the Battle of Kulikovo. At the legislative level, this memorable date was fixed on March 13, 1995.

It should be noted that the battle on the Kulikovo field not only became the most important milestone in stories Russia, but also in general predetermined the further development of our state.

Recall that in the grandiose battle with the Mongol-Tatars, which took place on September 21 (8th according to the old style), 1380, more than 100 thousand Russian soldiers took part, led by the Grand Duke Dmitry Donskoy. Moreover, it was the victory in the Battle of Kulikovo that marked the beginning of the liberation of Russia from the yoke of the Golden Horde.

By the end of the XIV century, the Mongol yoke was going through hard times. The Golden Horde, whose khan was the senior emir Mamai, was already beginning to disintegrate. At the same time, opposite processes were taking place in Russia. Under the leadership of the Moscow principality, the unification of the Russian lands took place, which naturally could not but alarm the Mongol ruler.

The first attempt to "pacify" the Moscow principality Mamai made in 1378, sending an army to Russia under the leadership of Murza Begich. The latter was defeated, and then, having entered into an alliance with the Lithuanian prince Yagailo and the Ryazan Oleg, in the summer of 1380, Mamai set off on a long campaign against Russia.

Having learned about the plans of the Mongol Khan, Grand Duke Dmitry Donskoy gathered a 100-thousandth squad and also went on a campaign to meet the enemy beyond the Don, not allowing to join up with the allied troops.

Early in the morning, September 21, 1380, Dmitry Donskoy's squad and the arriving Mamai troops deployed in a linear battle formation on both sides of the Kulikovo field.

The beginning of the battle was marked by a full-time battle between the Russian and Mongolian soldiers. Both died. Then the Tatar cavalry rushed into battle.

The Russians suffered significant losses, but they survived. Then the Mongol Khan decided to throw all available forces into battle in order to "crush" the enemy. The squad of the Grand Duke Dmitry Donskoy found itself in an unenviable position and even there was a threat of encirclement.

However, the course of the battle was reversed by the Ambush Regiment, which stabbed the Horde troops who had broken through in the back and served as a signal for the offensive of the entire Moscow army, which ultimately led to the flight of the Mongol-Tatars.

The victory of the army of Dmitry Donskoy was complete and unconditional, and the battle on the Kulikovo field became the most important milestone in the struggle of the Russian people against the yoke of the Golden Horde.

However, one should not forget what price the Russian army paid for such an important victory. The soldiers who died in the battle were collected and buried in mass graves for a week after the battle.

Finally, it is worth adding that at the time of the flight of the Mongol-Tatars, Yagail's army was already 40 km from the battlefield. However, having learned about the defeat of Mamai, the Lithuanian prince hastily set off on his way.