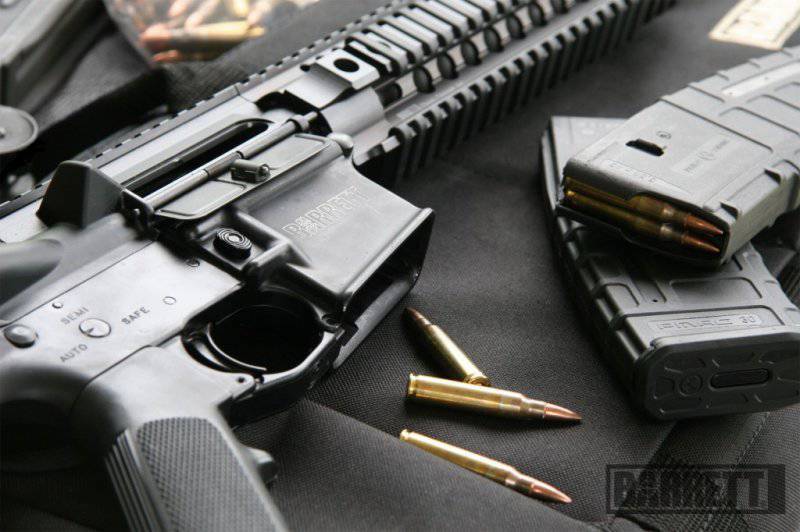 At the mention of the company Barrett almost any person, at least a little interested in firearms weapons, immediately there are associations with large-caliber rifles. But it would be foolish to expect that Ronnie Barrett would limit himself to only such weapons when his company in a record time gained its fame in the market, and its founder is on the board of directors of the National Rifle Association. In addition to the development and production of sniper rifles, the company Barrett is engaged in the production of other types of weapons, one of which is automatic rifles. Despite the small number of models, or rather, only one model, since three rifles replaced one another in production, this weapon is especially interesting, though it is mainly interesting because of the ammunition that is used in it.

Many believe that the adoption of low-impulse cartridges was a big mistake and not one year, or rather, not one decade, work is underway to replace these ammunition in automatic rifles and automatic carbines, saying "our way" machine guns. The main drawback of such ammunition is considered a small stopping effect and a low effective range, and it does not matter what cartridge we are talking about: the domestic 5,45 or the NATO cartridge 5,56, in any case, these munitions have long been recognized as ineffective and require replacement. The reason why everyone understands this, but no one is in a hurry to do anything, lies, as it is not trivial, in a financial matter, and even the US Army, an army that is well funded, in spite of any problems in the world and the country itself, even before so far not completely transferred to new ammunition, which offered a lot. Although in this case, rather, it slows down the US Army of NATO. Nevertheless, new cartridges are already being produced at full speed, and weapons for these ammunition are already in place. As, for example, Barrett REC7.

I think no one will be opposed to delaying acquaintance with this weapon and talk about the ammunition that it uses, because in fact the new cartridge is the main “trick” of this rifle. So, the cartridge for the Barrett REC7 automatic rifle was developed by Remington, equipped with a millimeter 6,8 bullet and has a 43 mm liner length. This ammunition was not developed as a separate cartridge for Barrett’s automatic rifle, this cartridge is positioned as a new universally used ammunition, instead of the well-known 5,56x45. The main goal in creating this ammunition was to create such a cartridge, which would not exceed in size, armed with 5,56, while it was required that this ammunition had a greater stopping power and allowed to create weapons of greater effective range than carbines.

The core of the .300 cartridge of the same company became the basis for the new ammunition, the neck of the cartridge was re-used under the new caliber and received this ammunition. The standard bullet for this cartridge is a bullet with a hollow nose weighing 7,45 grams, but there may be bullets without a cavity. A bullet weighing 7,45 grams accelerates to a speed of about 800 meters per second, respectively, its kinetic energy is equal to 2390 Joule. It is easy to see that, despite the slower speed of the bullet, in comparison with NATO 5,56, it has greater kinetic energy, due to the increase in caliber and, consequently, weight. This is all, according to the developers, increases the stopping effect of such ammunition by one and a half times in comparison, back to 5,56.

The most important feature of the new 6,8х43 cartridge is that it can be used in standard, already nashtampirovannyh stores for weapons, while, say, М16 or М4 when adapting to the new ammunition will require only the replacement of barrels and combat larvae gate. It is this feature that put this ammunition in the lead, leaving even close, but behind the main competitor in the form of a cartridge 6,5х38, which at higher performance can not be used even in standard stores.

Immediately after the release of this munition, it was proposed both for the army and the police, and for the civilian population. At the moment, weapons for this ammunition are few, but the main models in service are already being tested with a new cartridge, we are talking about the M16 and the M4. In addition to them, an automatic rifle created within the walls of Barrett’s factories, the latest version of which is designed specifically for this ammunition, is highlighted.

The development of Barrett’s automatic rifle began in the 2000 year, then it was planned to create a weapon chambered for 5,56, but by the actual final development, the ammunition of the new automatic rifle was changed to 6,8х43, which set the weapon completely different parameters. Together with the 6,8X43 cartridge, a new rifle was demonstrated, which was based on such weapons as the AR15 / M16. At that time she had the name M468. Naturally, the model, which was simply “re-created” under the new cartridge, did not meet all the requirements that apply to modern weapons. So, the most important drawback was the increased wear of parts. So, the weapon was shown, but no one gave it to his hands in order to exclude possible censure of a still raw sample. In the shortest possible time, a deeper adaptation to the M468А1 under this munition was created, which, although it improved its reliability performance, still had gaps in it, it was also decided not to start mass production, limiting it to only a few small batches. The final version of the Barrett automatic rifle was created only in 2008 year, just in time for the competition for a new automatic rifle for the US Marine Corps, which, by the way, it won. At the moment, only the latest version of the weapon REC7 is being produced, all others are abandoned far and far away. The same rifle is available in the civilian market, but without the possibility of automatic fire.

Despite the rather large external similarity of this rifle with the M16 and the fact that, in essence, the weapon is based on a “black rifle”, this is by no means the same sample, there are differences in them, and they are significant. First of all, it is worth noting that the REC7 automatic rifle is built on an automatic system with removal of powder gases from the barrel bore, but the vapor system with a short stroke of the gas piston. The gas block has a regulator to control the pressure of the powder gases in the system, depending on the conditions of use of the weapon. Also an interesting feature is that there is a thread in the gas block to install the device for silent firing. In general, I got the impression that this weapon is a product of the crossing of the M16 and the M4, of course, has its own characteristics, but if you wish, it is easy to find similarity even in appearance. But then again, this is a completely different weapon, if only because it uses another ammunition.

The barrel of an automatic rifle consists of two parts, top and bottom. Anodized aluminum served as material for them, however, due to the fact that the receiver is “unloaded”, this does not affect the strength of the weapon. When the receiver is divided into two parts, the bottom remains: the firing mechanism, the attached butt, adjustable fixed position on the 4, and of course the receiver of the magazine and the handle. A remarkable point in this whole case is that, if desired, you can replace the lower part of the receiver from the REC7 with the same part of the M16. At the top of the same honor is a bolt carrier with a bolt, a barrel and a venting mechanism of the weapon.

As you can see, there is nothing supernatural in weapons, rather, it even resembles the creation of Victor Frankenstein, although the “donors” were completely “living” samples. Nevertheless, the weapon turned out, as it was already shown by its short use, quite reliable and effective. The total length of the rifle with the folded butt is equal to 823 millimeters, with the 902 moved apart, for the version with the barrel 406 millimeters. The weight of the weapon is 3,5 kilograms, which is too much. It feeds a rifle from standard stores of various capacities. The same weapon can be with a barrel length equal to 305 millimeters. In both cases, the pitch of the rifling in the trunk is 10 inches. The fire rate of the weapon is about 750 shots per minute, while the weapon itself maintains an effective range (not paper) at a distance of 500 meters using open aiming devices, but with optical sights the effective range increases.

By the way, about the sights of this rifle. The fact is that with this weapon, open sights are not basic. The main collimator sight is considered or an optical sight with a fixed or variable magnification to x4. The open sighting devices are made of folding, additional, or in this case, the main sighting devices are mounted on a set of 50 M-CV attachment strips. It is possible to “land” a lot of other devices on the same slats, starting with a miniature flashlight, ending with a night vision device. In principle, it is quite clear why the preference in this weapon is not given to open sighting devices. Still, the REC7 automatic rifle was not intended as a weapon widely distributed in the military, but as a tool for any specialists, although it seems to me that it is more appropriate to use the word “snicker”, not without envy, of course).

If we summarize the description of the REC7 automatic rifle, it should be noted that it appeared in the hands of people unrelated to Barrett only after it was “licked” from all sides. Why this fact needs to be noted separately. Novelties of domestic weapons appear lately like mushrooms after rain and apparently driven by someone from above manufacturers are trying to give it away as soon as possible. As a result, a negative opinion about weapons develops, since there simply cannot be any flaws when they finished designing it last night and started producing it already this morning. Naturally, all arising problems are eliminated over time, but the opinion has already been formed, and it is very difficult to change it. As they say, there were spoons, but the sediment remained. Barrett, with his designers, spent 4 of the year to bring his automatic rifle to a state close to ideal, made 2, so to speak beta versions. As a result, I received a weapon about which few people can say something bad and which they almost immediately accepted in the military environment. Of course, we can say that already known schemes were used, and even individual nodes were copied from other models. But if you figure it out, then even just putting it together from what is already ready and making it all work without fail is not an easy task. In other words, the REC7 automatic rifle is a vivid example of the rule about fools and half the work that is not shown.

Well, you can not ignore the fact that the new rifle uses a new cartridge, which is recognized as more effective and suitable for mass weapons than the current "NATO" 5,56. The fact that it has not yet been introduced everywhere does not mean that this will not happen in the near future, and even if it is not 6,8x43, then perhaps another more effective ammunition. In view of the fact that domestic 5,45, to put it mildly, is also clearly not the ultimate dream, it is worth considering that we are ahead even in this. After all, we, unfortunately, have no alternatives, as well as weapons, for these alternatives, at least in the experimental version. The only option at the moment, is to return to 7,62x39, but something is not the alternative that I would like to see. 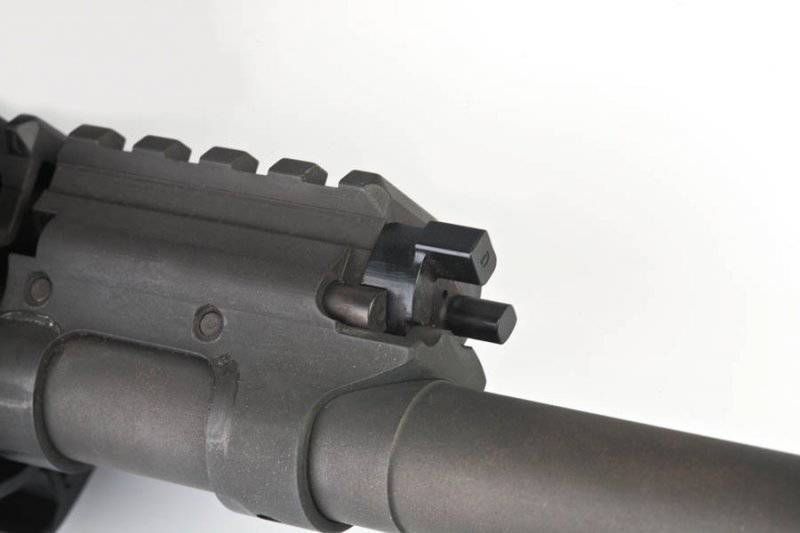 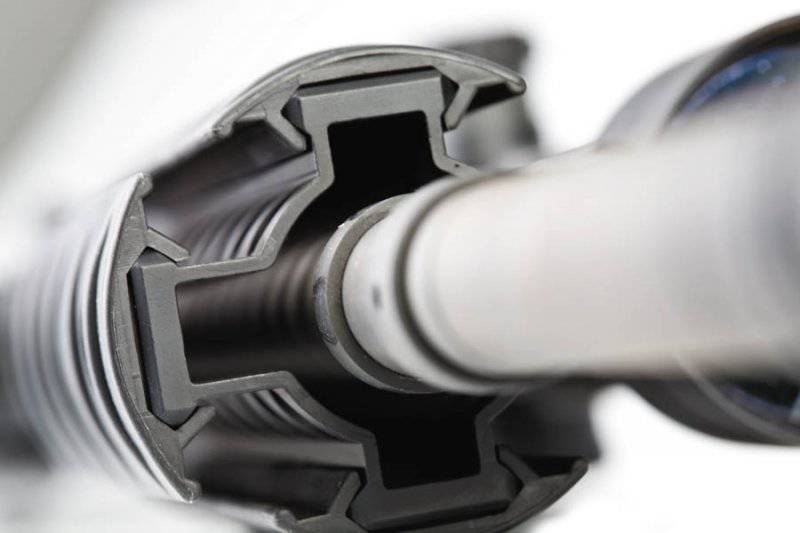 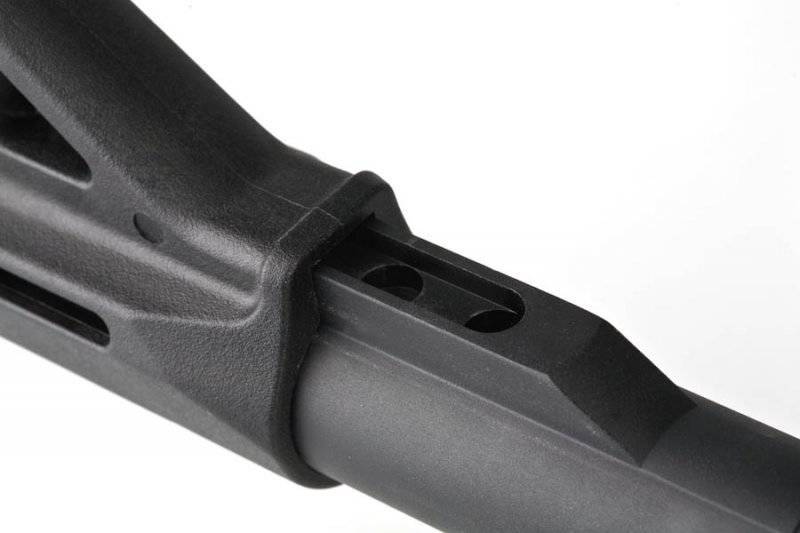 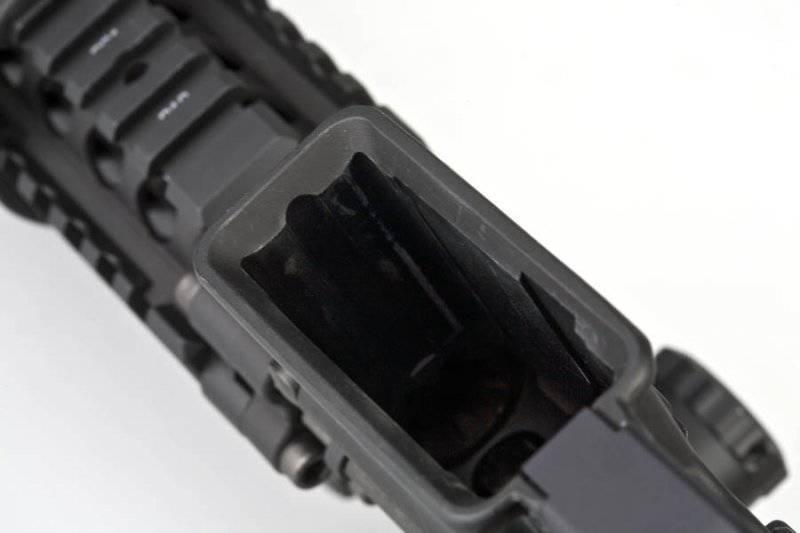 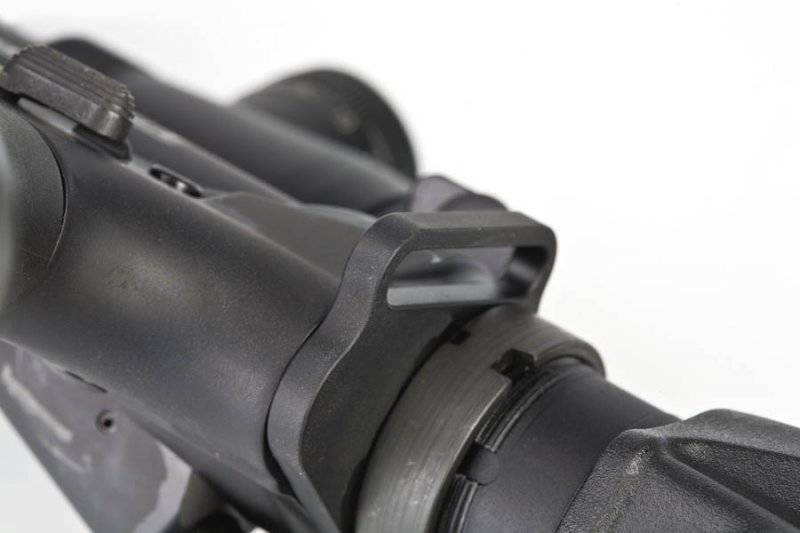 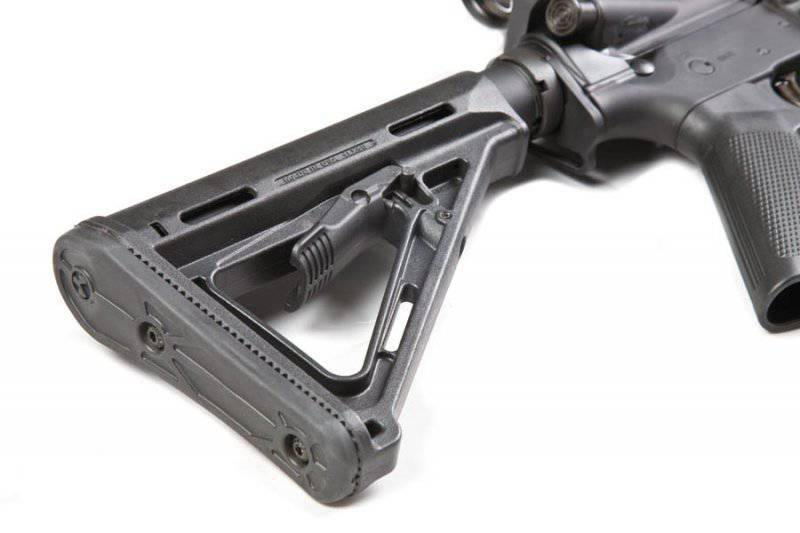